ABSTRACT: Background: Pediatrics pose a unique set of risks of medication errors, predominantly because of the need to make dosage calculations, which are individually based on the patient’s weight, age or body surface area (BSA), and their condition. This increases the likelihood of errors, particularly dosing errors. In particular; preventing dosing errors is an important part of ensuring safe and quality patient care in the pediatric population. To evaluate appropriateness and accuracy of the prescribed drug dose using BSA as a parameter in pediatric patients. Methods: The present study was cross sectional, observational, and prospective one, conducted on an outpatient basis in pediatric patients. A total of 500 prescriptions were randomly collected and used to analyze prescribed dose. Calculation of standard dose according to BSA of individual of each drug was done by using formula: Individual dose = BSA (m2)/1.7 × average adult dose and compared with the prescribed dose of that particular drug. The BSA of an individual can be calculated from Dubois Raymond’s formula. Results: The 500 prescriptions included in the study were for a total of 1216 drugs; out of which 362 (29.76%) drugs were in under dose, 245 (20.15%) drugs were in appropriate dose and 609 (50.08%) drugs were in overdose compared to their standard doses according to BSA. Conclusion: In this study, around 80% of prescribed drugs were either under dose or overdose which highlights the continuing crisis of dose calculation error among prescriptions of pediatric patients.

INTRODUCTION: Safety is a concern in many professions, including health care. The most common breach in safety that occurs in hospital settings are medication errors. 1 The National Coordinating Council for Medical Error Reporting and Prevention (NCCMERP) has defined medication error: “Any preventable event that may cause or lead to inappropriate medication use or patient harm while the medication is in the control of the healthcare professional, patient, or consumer.” 2 Medication errors occur more frequently in the pediatric indoor patient population than in the adult population. 1

Pediatrics pose a unique set of risks of medication errors, predominantly because of the need to make dosage calculations, which are individually based on the patient’s weight, age or body surface area (BSA), and their condition. This increases the likelihood of errors, particularly dosing errors. 3 For pediatrics, incorrect dosing is the most commonly reported medication error. The National NCC MERP takes the stance that there is no acceptable 1ncidence rate for medication errors, and that the goal should be to continually improve health care systems so that medication errors are prevented. In particular, preventing dosing errors is an important part of ensuring safe and quality patient care in the pediatric population. 1

The purpose of this study was to evaluate appropriateness and accuracy of prescribed dose calculation using BSA as a parameter in pediatric outpatient population.

The present study was cross sectional, observational, and prospective one, conducted on an outpatient basis at the Pediatric department in P.D.U. Govt. Hospital; Rajkot after getting the clearance from Institutional Ethics Committee. A total of 500 Pediatrician’s original prescriptions were randomly collected over a period of 4 months (January 2015 to April 2015) and analyzed for prescribed dose calculation using BSA as a parameter. All pediatric outpatient department (OPD) patients who were prescribed any drug were included in the study except patients of neonatal OPD and who were prescribed medicaments for topical use, vaccines and antisera for passive immunization.

Calculation of standard dose for each drug was done by using formula: Individual dose = BSA (m2)/1.7 × average adult dose and compared with the prescribed dose of that particular drug. Average adult dose of each drug was taken from National Formulary of India (4th Ed.); 2011 and Martindale: The Complete Drug Reference (36th Ed.). The drug for which prescribed dose was not in range of average adult dose, was considered as dosing error. Dose calculation error was divided into two categories; either under dose or overdose.

System wise distribution of prescribed drugs as shown in Table II, Antihistaminic drugs  were most common, followed by Respiratory drugs, Vitamins, Analgesics, Antibiotics, Mineral Supplements, GIT related drugs, Antiepileptic, Antihelmintic, chelating agents. Antiamoebic and others (include steroid, thyroid drug and antihypertensive) were least common. Out of 1216 drugs, 362 (29.76%) were under dosed, 609 (50.08%) were overdosed and 245 (20.15%) were within normal range according to BSA formula derived dose range.

Under dose profile as shown in Fig.1 (a), majority part is contributed by antihistaminic drugs (44.48%) and analgesic-antipyretics (33.32%). 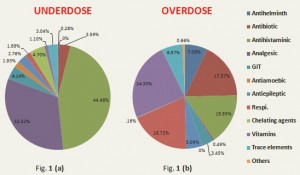 DISCUSSION: The most important aspect for selection of a drug and establishment of the proper pediatric dosage is the fact that the pediatric patient is not just a small adult. Children have different physiological, pharmacokinetic and pharmacodynamic parameters compared to adults and therefore they require individual dosages. Two methods are commonly reported as being favorable for calculation of the proper pediatric dosage, namely per weight and per Body Surface Area. Dosages based on the body weight are believed to be insufficient for the achievement of proper serum concentration of most drugs, the body surface being the most valid basis for dosage, since it is related to some physiological functions that account for the differences in pharmacokinetics in patients of different ages. 4

The British National Formulary (BNF), Martindale’s Pharmacopoeia and many other reference textbooks state that the most reliable methods for calculation of children’s drug doses are those based on BSA. 5

The average number of drugs per prescription 2.92 in our study has been similar to the reported figure of 2.9 in another study conducted in Mumbai. 6 However, this number is higher as compared to 2.5, 2.22 and 2.3 from Nagpur, Karnataka and Spain respectively. 6, 7

In the present study Table 1 show that, out of total 1462 drugs, 99.72% drugs were prescribed by oral route and 0.27% drugs by parental route. Similar result was seen in study done by Gedam DS et al. where 99.32% drugs were prescribed by oral route. 8 Most common prescribed formulation was tablet (74.62%) followed by syrup (21.61%). In other study conducted by Gedam DS et al. result was different, syrup and tablet were prescribed in 62.19% and 6.9% respectively. 8 Oral liquid medicines may have disadvantages, such as a bad taste, portability problems or refrigerated storage conditions. Therefore, WHO currently favors that young child, particularly in developing countries, is treated with oral solid medicines. This claim is supporting to our result. 9

Literature search shows many studies, in which antibiotics were most commonly prescribed drugs among pediatric patients. Such high level of antibiotic prescription is reflected in studies conducted in Sudan (81.3%), India (79%), Gambia (63.4%) and Bahrain (51.6%). 12 But, antibiotic prescribed in our study were 10.61%.

System wise dosing error as shown in Table III, most common drug prescribed in underdose were analgesics (76.47%).  Unfortunately the risk associated with underdosing of Analgesic drugs and possible treatment failure has not received the same attention as the risks associated with overdosing, possibly reflecting the perception that this practice is safe. Furthermore underdosing was the most frequent reason for a paracetamol prescription being off label, a situation similar to that reported by Ekins-Daukes et al. for a wide range of paediatric medicines. However, considering the current demands for cost effective therapy, a prescribing habit that could lead to treatment failure is of potential concern. 13 Antihelmintic drugs (97.73%) were prescribed in the overdose range; the reason might be fear of growing problem of Antihelmintic resistance due to under dosing. 14 Though Albendazole an effective single dose, broad spectrum antihelmintic drug, 15 literature search shows that that none of the single dose anthelmintic regimens are recognized as curative therapy for an individual patient, with current clinical recommendations advocating multiple doses over one to three days. 14

Inappropriate dosing is of particular concern for antibiotic use with respect to the development of resistances but also regarding adverse drug reactions. Antibiotic (82.95%) were third common drug prescribed in overdose, these result is opposite to study done by Porta et al who found that under-dosing of antibiotics is the most common reason for off-label use in the UK and in Italy. The problem is also highlighted in a historic review from England by Ahmed et al. who is concerned that many antibiotics used in children are under-dosed. If medication is under-dosed possibly no therapeutic benefit but a risk for adverse drug reactions (ADRs) could occur, as those often are independent of the dose. 16

Under dose profile as shown in Fig.1 (a); majority part is contributed by Antihistaminic drugs (44.48%). The first generation of antihistamines has never been clinically tested in children; nevertheless, it is widely used. 17 These drugs are recommended for children by extrapolation from pharmacological and clinical data in adults. This might be due to physician’s behavior of prescribing sub-optimal dose due to fear of toxicity in over dose.

Our study shows overdose in 50.08% and under dose in 29.76% of total prescribed drug. This result is different from Knopf et al. study result in which under dosing was greater than overdosing. Also different from similar findings were previously reported from Scotland and Brazil. 16

Such high level of dosing error can be explained by following reasons: 2, 20, 21

Difficult to eliminate dosing error completely but advocated certain steps to reduce it: 2

Limitation of study were: To define error we had set cut of range, prescribed dose of drug not falls in this range calculated either overdose or under dose. But not all patients to whom this wrong dose has been prescribed developed hazards (toxicity or therapeutic failure). We couldn’t predict in which patient these hazards would develop. Study was unicentric and limited only to outdoor patient department in which dosing error generally more than indoor patient. 2   Question also arises about uniformity of prescriptions, because they were written by medical officer, resident doctor and physicians so affected by their different knowledge, skill, altitude and clinical experiences. Also Prescriptions were might be under influence of seasonal pattern and severity of disease.

Many drugs are not studied well in infant and pediatric patients. These drugs are recommended for children by extrapolation from pharmacological and clinical data in adults. 22, 23 So, in our opinion future research should be conducted in this area to study these drugs in infant and children.

CONCLUSION: Our study reflects continuing problem of dosing errors in the general pediatric population. Practically it is impossible to eliminate dosing error completely. Understanding of prevalence, determinants and spectrum of its signals demand to develop preventive strategies.