Background: Prescription of drugs, which needs to be continuously assessed and refined according to disease progression. It not only reflects the physician’s knowledge about drugs but also his/her skill in diagnose and attitude towards selecting the most appropriate cost-effective treatment. Antimicrobials are among the most commonly prescribed drugs in hospital. As per literature, they account for over 50% of total value of drugs sold in our country. Such studies have been sparse from Gujarat and hence, this study was undertaken.

Methods: Retrospective study was carried out by collecting 350 prescriptions containing antimicrobial agents in paediatric department at Sir Sayajirao General (SSG) Hospital, Vadodara to assess the prescribing patterns of antimicrobial agents. All information about the drugs details recorded in pre-tested Proforma that was finalized by our Pharmacology department.

Conclusion:  Results indicates need for improving the prescribing pattern of drugs and minimizing the use of antimicrobial agents. It is suggested that further detail analysis to judge the rationality of the therapy is necessary

INTRODUCTION:Prescription order is an important transaction between the physician and the patient 1. It brings into focus the diagnostic acumen and therapeutic proficiency of the physician with instruction for palliation or restoration of the patient’s health 1. Prescription of drugs is an important skill, which needs to be continuously assessed and refined accordingly. It not only reflects the physician’s knowledge of pharmacology and pathophysiology of diseases but also his/her skill in diagnose and attitude towards selecting the most appropriate cost effective treatment 1.  It is an order for a scientific medication for a person at a particular time 2. Setting standards and assessing the quality of care through performance review should become part of everyday clinical practice 3. Medical audits oversee the observance of standards of medical treatment at all levels of the health care delivery system.  The study of prescribing patient is a component of medical audit which seeks monitoring, evaluation and necessary modifications in the prescribing practice of the prescribers to achieve the rationale and cost effective medical care.

Antimicrobials are among the most commonly prescribed drugs on worldwide basis. They account for nearly 20% of all new and repeat prescriptions each year. Hospital purchase of these drugs is thought to be about 25 to 30 % of the total annual drug budget4 and each tertiary care hospital in the United States typically spends more than $1 million every year on the purchase of antimicrobial drugs alone. There is no doubt that these drugs have massive utilization that by no means can be less in India as compared to the developed countries.

In the view of the emerging worldwide threat of bacterial resistance, there are increasing need to identify determinants and patterns of antimicrobial prescribing to identify where the clinical practice can be improved17. The present study was planned with the objectives;

The data generated from this study would be helpful to communicate with the prescribers and suggest the various lacunae observed to improve the prescribing practice. The data will also be helpful in planning longitudinal studies on prescribing pattern and drug utilization patterns. Thus it will ultimately benefit the patients with fewer incidences of adverse effects with minimal rise in resistance strain of bacteria and reduction in the cost of therapy.

MATERIAL AND METHODS: This retrospective study was carried out by collecting prescriptions of the indoor patients admitted in the wards paediatric department at Sir Sayajirao General (SSG) Hospital, Vadodara to assess the prescribing patterns of antimicrobial agents. Total 350 prescriptions containing antimicrobial agents were collected from the hospital record section for the study. Prescriptions were collected irrespective of the indications. The data were collected in a proforma, containing information regarding age and sex of the patients as well as trade/generic name of antimicrobial drugs, numbers of drugs prescribed, their dosage, frequency, route of administration, duration of therapy along with the clinical diagnosis  (Annexure -1).

The antimicrobial agents were divided into following major groups for the study;

(1)   Total numbers of the antimicrobial agents prescribed irrespective of number of prescription.

(2)   Mean numbers of the antimicrobial agents per prescriptions.

(4)   Numbers of antimicrobial agents prescribed by generic vs. trade name.

(6)   Numbers of prescription with one or more than one antimicrobial agents.

From the total numbers of fluoroquinolones (59; 8.55%) prescribed, highest numbers were prescribed for gastrointestinal (32.20%) and genitourinary tract (25.42%) infections, while the lowest was for soft tissue (1.69%) infections and none for either hepatobilliary diseases or for prophylactic purposes (table 1). However among fluoroquinolones, ciprofloxacin (89.83%) (Fig. 1) was prescribed extensively, while surprisingly norfloxacin (1.69%) and gatifloxacin (1.69%) has very low preference in the prescriptions (Table 2).

TABLE 1: FREQUENCY OF PRESCRIBING PATTERNS OF ANTIMICROBIAL AGENTS IN DIFFERENT SYSTEMS IN ACCORDANCE WITH DIAGNOSIS 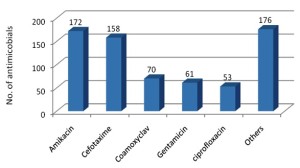 TABLE 3b: ROUTE OF ADMINISTRATION

TABLE 3d: NO.OF PRESCRIPTION WITH ONE OR MORE THAN ONE ANTIMICROBIAL AGENTS

DISCUSSION: A prescription by a doctor may be taken as a reflection of physician’s attitude to the diseases and the role of drug treatment. It also provides an insight into the nature of health care delivery system19.Several classes of antimicrobial agents have been discovered and hundreds of them are available today. Antimicrobial agents are life saving in many conditions.  With the advent of antibacterial therapy death from an incurable bacterial infection is considered a thing of past.  These drugs are the most widely used category of drugs in the world accounting for over one quarter of hospital drug costs 20.

In our study, it was found out that aminoglycosides were commonly prescribed antimicrobials followed by β-lactam group and cephalosporins.  Amikacin, coamoxy-clav and cefotaxime were frequently prescribed. Wider use of amikacin observed in our study may be due to its broad antibacterial spectrum and drug of choice for the most cases of hospital acquired gram negative sepsis, as it is effective against organisms resistant to other conventionally used aminoglycosides (i.e. gentamicin, tobramicin). Also physician’s choice and easier availability in hospital pharmacy may also dictate a rather heavy use of a particular drug. Other factor contributing to the preferential uses of the above antimicrobial agents in the wards may be due to their low cost with better safety profile and ease of their availability from hospital pharmacy.

Data analysis in our study showed that numbers of prescription with two or more than two antimicrobial agents is quite high as compared to those with single antimicrobial agent. Mean number of drugs per prescription was 1.97. This indicates a large numbers of prescriptions in our study were for multiple drugs.  This may indicate empirical nature of therapy.  A study carried out in Kathmandu valley (2004) reported that, a high percentage (93%) of patients were prescribed at least one antibiotic23. These figures are quite opposite to our study. A study carried out by Marlies et al., (1998) reported that 36% of the patients were prescribed at least one antibiotic 24. These reports are similar to our study. Prakash et al., (1989) and Ansari et al., (1998) found this number to be 5.86 and 5.05 medicines per prescription respectively in their studies 25, 26. These figures are quite high as compared to our study.

Average number of the drugs per prescription is an important index of the scope for review and educational intervention in prescribing practices. One must remember that the benefit: risk ratio for each drug decreases when multiple drugs are given.  Extreme and empirical treatment is an important cause of irrational antimicrobial use. It is preferable to keep the mean number of drug per prescription as low as possible. Since, the highest figures always lead to increased risk of drug – drug interaction 27.

In study, it was found out that 86.81% antimicrobial agents were prescribed for parenteral administration, while only 13.18% were for oral route in paediatric patients.  A study carried out in Kathmandu valley (2004) showed that, 75% of antibiotics were given by injections23.

These figures are somewhat similar to our study. The parenteraluse of drugs in general and antibacterial in particular is important parameters to judge rationale drug use. Unnecessary use of parenteral antimicrobial adds to cost of therapy and also increases the risk of blood borne infections.

In countries where disposable needles and syringes are scarce and the sterilization facilities are unsatisfactory, the administration of drugs by injection should be kept to the minimum required. Preference to parenteral route over oral route observed in our study could be due to study conducted in the indoor patients.

In our study observed that antimicrobial agents were prescribed more frequently by generic name (83.48%) as compared to trade name (16.52%). A study carried out by Nazima et al., showed that 77.61% of the drugs were prescribed by generic name, while remaining by trade name28. These reports are similar to our study. These show that apparent control over the prescribing habits of the physicians for indoor patients at our hospital. The most probable reason for such prescribing may be due to easier availability of antimicrobial agents in our hospital pharmacy as well as proper communication between the prescribing physicians and the hospital authority.

Our study had a number of limitations. The study was retrospective and seasonal variations were not considered. The patient care indicators were not studied. The study was limited to only a paediatric department. Also, further studies for a longer period of time in all the clinical departments are required. The data presented here will be useful in future, long term and more extensive drug utilization studies in the hospital and in promotion of rational prescribing and drug use in hospitals.

CONCLUSION: Pooled data from this study showed that prescribing frequency of antimicrobials more frequently for respiratory tract infections. Because of wider spectrum co-amoxyclav, cefotaxime, amikacin and ciprofloxacin were commonly prescribed. Positive finding in this study is more numbers of antimicrobials are prescribed by using generic name but on the other side more numbers of multiple drug prescriptions found out and antimicrobials are administered by using parenteral route more frequently. So this result indicates a scope for improving the prescribing pattern of drugs and minimizing the use of antimicrobial agents. It is observed that further detail analysis in respect to selection of dose, frequency and duration of therapy of antimicrobial agents used in the wards is neededas per criteria’s of Kunin et al., 29 to judge the rationality of the therapy

Improvement for prescribing habit would be facilitated by providing feedback, prescriber education and various intervention strategies like introduction of hospital formulary, control by institutional regulatory authorities, and utilization of antibacterial susceptibility test. We propose to make suitable intervention in future and to assess their impact on the utilization of antibacterial drugs in our hospital.

More emphasis needs to be laid on teaching the art of writing a prescription to undergraduate and  postgraduate medical students. A one week posting in clinical pharmacology and therapeutics if possible, should be taught over during internship and this period should be utilized in teaching prescription writing and rational drug therapy.

Here, it is important to incorporate local data on the hospital microbiological flora along with epidemiologic data to formulate guidelines for empirical antibiotic usage and de-escalation therapies so as to aid clinicians to make appropriate antibiotic choices for their patients.

16.        Cars H, Hakansson A. To prescribe or not to prescribe antibiotics: District physicians’ habits vary greatly and are difficult to change.Scand J Prim Health Care 1995 Mar;13(1):3-7