INTRODUCTION: The oral cavity is the breeding ground to a wide range of gram positive and gram negative bacteria. This dynamic micro flora changes with respect to age, hormonal status, diet and health status of an individual. Aas et al 1 has found more than 700 bacterial species from healthy oral cavity. Some of these bacteria show specificity as to individual subjects, others are specific to particular sites within the oral cavity. Oral biofilms harbouring pathogenic bacteria are among the major virulence factors associated with dental diseases such as caries and periodontitis 2, 3.

Essentially, all oral bacteria possess surface molecules that foster some type of cell-to-cell interaction4. Only a few specialized organisms, primarily streptococci are able to adhere to oral surfaces such as the mucosa and tooth structure 5. Mutans streptococci can colonize the tooth surface and initiate plaque formation by their ability to synthesize extracellular polysaccharides from sucrose, using glucosyltransferase 6, 7.  This sucrose dependent adherence and accumulation of cariogenic streptococci is critical to the development of pathogenic plaque. Streptococcus mutans survives in an extremely diverse, high cell density biofilm on the tooth surface. These bacteria are strongly associated with caries formation 8-12.

All Streptococcus mutans serotypes such as Streptococcus sobrinus (serotypes d, g and h) have been shown to have significant potential to cause caries, but because of their significant genetic and biochemical differences, they should not be referred as simply as the single species S. mutans. S. mutans and lactobacilli are acidogenic and acid uric bacteria and seem to be the primary organisms associated with caries in humans.

Staphylococci are mainly harboured on the skin, as well as skin glands and mucous membranes in humans. Although these micro-organisms are considered to be transiently resident in the oral cavity 13, 14, during the course of our previous studies the occurrence of Staphylococcus epidermidis was found significantly high in saliva from healthy adults 15. There are several early reports of S. aureus isolation from the healthy oral cavity but detailed information on the oral distribution of Staphylococci is lacking.

Both aerobic and anaerobic microorganisms are responsible for dental infection. Saini et al., 16 had compared the normal aerobic and anaerobic bacterial oral flora from deep seated dental caries, gingivitis and adult periodontitis. All these samples belonging to both the control and study groups yielded microbes. Aerobic/anaerobic ratio was high in normal flora (1.48) as compared to dental caries (0.9), gingivitis (0.72) and periodontitis (0.56).

Human beings and their ancestors have always been afflicted by diseases. The advent of modern or allopathic medicine turned attention of scientists increasingly from plant sources to synthetic preparations as the basis for modern drugs. However, the deleterious side-effects of many modern drugs along with the development of drug-resistant organisms have brought back into focus ethnomedicinal studies. The general antimicrobial activities of medicinal plants and plant products have been reviewed previously 17, and more attention have been focused on potential sources of functional substances such as antimicrobial substances 18, 19.

Several in vitro studies have indicated that Methanolic extract of Punica granatum's flowers had great antibacterial and antifungal effects 20, and the hydro alcoholic extract of its fruits was very effective against dental plaque microorganism 21.

Isolation and identification of Dental Pathogens: The dental plaque sample was inoculated into nutrient broth and incubated for 18-24 hours. Inoculated samples were streaked on nutrient agar and other selective media. The pathogens were isolated and identified by Bergey’s manual 22.

Pomegranate Fruits: The pomegranate fruits were purchased and collected from a well known market in Dehradun city. Seeds of the fruits were used in the study by extracting with ethanol and petroleum ether.

Method of extraction: The pomegranate seeds were separated, shade dried and ground into powder using a blender. The resulting powder was then stored at room temperature in a clean, air-tight container. Crude solvent extract of the plants was prepared by taking 50 g of dried powder sample and extracted by Soxhlet apparatus. The solvent was removed under reduced pressure in a rotary evaporator until the residue become completely dry.

Antibacterial activity of Extracts: 20 ml of Muller Hinton agar melted and cooled at 45OC was poured into sterile petri plates and allowed to solidify completely. A lawn of test pathogen was prepared by evenly spreading 100μl inoculums (1.5 x 108 CFU/ml) with the help of a sterilized spreader onto the entire surface of agar plate. Antibacterial activity of extracts was evaluated by agar well diffusion method. After the medium was solidified wells of 6mm were made in the plates with the help of a cork borer. 200μl of the extracts (500mg/ml) was introduced into the wells separately and the plates were incubated overnight at 37°C. The experiment was performed under strict aseptic conditions. Plates were incubated at 37oC for 24 h and diameters of inhibition zones (mm) were determined.

Prevalence of Bacteria in Dental Plaque Samples: The isolates obtained were identified on the basis of colony morphology and biochemical reactions. Total recovered isolates were 320 out of which 50% were Streptococcus sp., 28.12% Lactobacillus sp., 15.62% Staphylococcus sp. and 6.25% were Proteus sp.

Antibacterial activity of Extracts: Inhibitory activity of ethanolic extract of pomegranate seeds was compared with petroleum ether extract (Table 1). Both extracts were equally potential against all bacteria except Staphylococcus sp. which were least sensitive against petroleum ether.

Antibiotic sensitivity pattern of recovered Bacterial Species: Antibacterial agents and antibiotics are generally being used in therapeutic regimes for dental plaque related diseases 26. They can be applied locally and systematically such as swallowed as pills, swished around teeth, or inserted into the pockets of advanced gum disease.

The dental plaque bacteria were most sensitive against Doxycycline and Clindamycin while resistant against Tetracycline as shown in Fig. 1. The antibiotic sensitivity was shown by diameter of inhibition zone (DIZ). Table 2 illustrates that maximum DIZ was shown by Streptococcus sp. (35mm), and least by Proteus sp., (29mm). Streptococcus sp. showed maximum sensitivity towards amoxicillin while Lactobacillus sp. was resistant to this. Lactobacillus sp. was also resistant to erythromycin and ciprofloxacin. 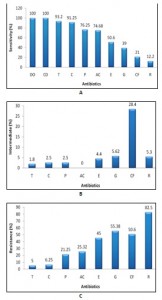 Clindamycin has a high level of in vitro activity against Staphylococcus sp., including penicillin-resistant strains 27. Clindamycin is effective against b-hemolytic Streptococci (groups A, B, C, and G), Streptococcus viridans group, and members of the S. milleri group. Lewis et al., 28 concluded that of specific interest is the extremely low incidence of resistance to clindamycin, even in countries such as Germany and Japan, where this agent is used frequently to treat acute dental infections 29.

Tetracycline is commonly used in dental practice as a prophylactic agent and for treatment of oral infections. Doxycycline, a member of the tetracycline class of antibiotics, is frequently used in medicine and in dentistry for its antibacterial properties. It is effective against a wide range of bacteria, including those found in dental infections.

Tetracycline produces side effects mainly on the digestive system which include mild stomach pain or upset, nausea, vomiting and diarrhea diarrhoea but it is effective in inhibiting the growth of Gram positive bacteria and hence should be recommended for use. However as a precautionary measurement tetracycline should not be recommended for children or pregnant women because they can discolour developing teeth and alter bone growth 30.