The primary objective of this study is to evaluate the effect of drug loading and the effect of excipients on the release pattern of Dexamethasone Sodium Phosphate from in situ PLGA implants formed in vitro in gelatin gel. This system is prepared by dissolving a biodegradable polymer (DL-PLGA 70K) in dimethyl sulfoxide (DMSO). Then the drug with excipients or without excipients was added to it. When the drug solution poured into the hallow of gelatin gel, the solvent dissipates into the surrounding gelatin base through diffusion leading phase separation & subsequent coagulation of the polymer and the drug to form a rod like implant in situ. Two types of implants were prepared such as implants containing Dexamethasone Sodium Phosphate and implants containing Dexamethasone Sodium Phosphate with biocompatible excipients such as Tween 20, Tween 60, Span 20, Span 80, Chremophore EL, Chremophore RH40, Stearyl alcohol, Cetyl alcohol, PEG 6000, Stearic acid, GMS, Benzyl Benzoate, Magnesium stearate, Dextrose, Lactose and Arachis oil were used. In vitro dissolution studies were performed in static condition using phosphate buffer (pH 7.4) to observe the release of drugs from these implants. Formulation containing only Dexamethasone Sodium Phosphate showed that drug loading was 86.82%, 90.60%, 87.47%, 91.79% and 92.78% against the actual drug content of 9.09%, 13.04%, 16.67%, 20% and 23.08% respectively. The release rate was 64.51%, 70.64%, 74.08%, 76.12% and 80.05 % respectively. It can be said that telease rate of drug increase with the increase in concentration of drug and Dexamethasone releases faster due to its hydrophilicity. On the other hand formulation containing Dexamethasone with excipients the release rate was 62.21%, 73.06%, 77.42%, 79.95% and 81.52%. For implants containing Dexamethasone with excipients the release rate were different due to their characteristics. It can be concluded from the experiment that although excipient lowers the release rate of drug, these can prolong the activity and the overall release kinetics is increased than that can be obtained from implants without excipients.

INTRODUCTION: Drug delivery is an application of biochemical engineering with technologies aimed at the improvement of safety and efficacy, better compliance and life extension of products. Drug delivery can offer a number of significant benefits to patients and physicians, as well as to the Pharmaceutical and Biotech Industries 1-3. Most people think of drug delivery systems as the added ingredients that go into oral pills that people take for all-day headache pain relief, a patch that helps people stop smoking or an inhaler to help a child with asthma breathe easier. It is this and more. It is an interesting technology that is transforming ordinary drugs into drugs optimized for their targeted applications.

Drug delivery is an enabling technology that is helping to expand other pharmaceutical industry sectors such as generic drugs and specialty pharmaceuticals. The technology is being used by some pharmaceutical firms to differentiate their products so that new opportunities can be created. Other companies are adding special drug delivery features to products to extend the marketing life of product lines 4-6.

Preparation of Implants: At first the gelatin solution was prepared in a clean beaker using gelatin, glycerol and purified water to prepare gelatin gel in vial.  A rod like stainless steel rod was inserted in to each vial through cork containing gelatin gel to make a rod shaped hollow in the gelatin gel. Then the drug solution was prepared by drug, polymer, solvent and sometimes drug with excipients (Tween 20, Tween 60, Span 20, Span 80, Chremophore RH 40 and Chremophore EL).

The drug content solution (0.75 ml for each implant) was poured into the hollow of gelatin gel using 1ml micropipette. The vials were then left in room temperature overnight (for 12 hrs) for the formation of implant and then the implants were kept in an incubator for 36 hours at 37oC. In this way total 24 implants (four implants from individual formulation) were prepared from six different formulations containing same dexamethasone sodium phosphate concentration but different excipients with same concentration.

Then, 40% sodium sulfate solution was prepared used for quantitative analysis of drug from gelatin gel after recovery of implants in order to minimize the loss of drug and finally, buffer solution was used for dissolution study of the implants. The gelatin solution was analyzed at 239nm for dexamethasone sodium phosphate. A schematic diagram of formation of in-situ implant in vitro has been shown in figure 1.

The devices were kept at room temperature. Then, 5 ml phosphate buffer samples were withdrawn at a predetermined rate using 5 ml syringe & it was replaced with fresh phosphate buffer (pH 7.4) at the same time. The withdrawn sample was analyzed for drug content with the help of UV spectrophotometer at 239 nm.

Quantitative Analysis of Drug in the Gel Media: After the removal of implants, the gelatin gel was preserved in the refrigerator for quantitative analysis. For the analysis of the drug being released in the gelatin media at first the gelatin was precipitated using 40% sodium sulphate solution. 5 ml of 40% sodium sulphate solution was used in each vial containing 16 ml of gelatin gel. Then the clear solution was poured and filtered through filter paper. Finally, the absorbance of the filtered solution was taken spectrophotometrically using distilled water as blank. The gelatin solution was analyzed at 239nm for dexamethasone sodium phosphate.

According to table 2 and 3 it has shown that the  implants of dexamethasone sodium phosphate was prepared by using solvent (DMSO), drug (Dexamethasone Sodium Phosphate), polymer (DL-PLGA ) and excipients (Tween 20, Tween 60, Span 20, Span 80, Cremophor RH 40 and Cremophor EL).

Percent Release and effect of Dexamethasone with or without excipient like Polysorbates (D10, DTW20. DTW60), Sorbitan monolaurate and monooleate (D10, DSP20, DSP80), Polyoxyethylated and polyoxyhydro- genated Castor oil (D10, DCPEL, DCPRH) from PLGA in-situ Implants has shown in figure 2, 3 and 4 respectively.  This is probably due to less hydrophilic behavior of dexamethasone. But the loss in the gel media was somewhat smaller than that of Dexamethasone without excipient only. As excipient has property to retain the drug in implants rather than diffuse in to the gel media. 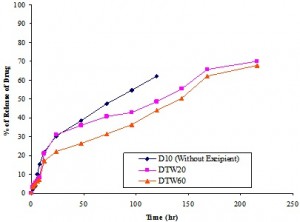 FIG. 2: EFFECT OF POLYSORBATES ON THE RELEASE RATE OF DEXAMETHASONE FROM PLGA IN-SITU IMPLANTS 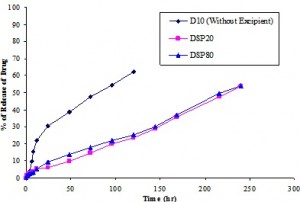 FIG. 3: EFFECT OF SORBITAN MONOLAURATE AND MONOOLEATE ON THE RELEASE RATE OF DEXAMETHASONE FROM PLGA IN-SITU IMPLANTS 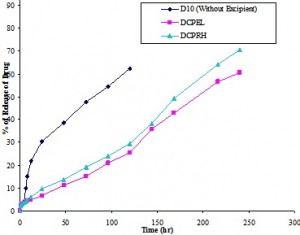 FIG. 4: EFFECT OF POLYOXYETHYLATE AND POLYOXYHYDROGENATED CASTOR OIL ON THE RELEASE RATE OF DEXAMETHASONE FROM PLGA IN-SITU IMPLANTS 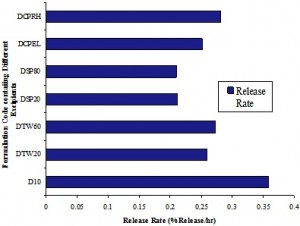 FIG. 5: EFFECT OF DIFFERENT EXCEPIENTS ON THE RELEASE RATE OF DEXAMETHASONE FROM PLGA IN-SITU IMPLANTS

However, it is very difficult at this stage to explain in details the actual mechanism of release since, the polymer degradation starts during dissolution period. The release rate of Dexamethasone salt at burst phase and phase II was also calculated from the trendlines of the graphs for all five formulations. The values of the correlation coefficients and release rate at burst phase and phase II was shown in table 5. 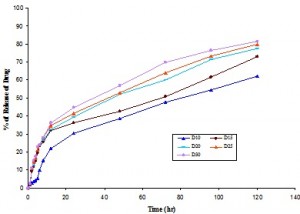 While plotted the release rate against concentration of drug at burst phase and phase II in the figure 7 and 8, it was clearly observed that D30 having drug loading 23.08% (theoretical) of Dexamethasone salt showed higher release rate than four other formulations those have lower drug loading of 20.00%, 16.67%, 13.04% and 9.09% for D25, D20, D15 and D10 respectively. 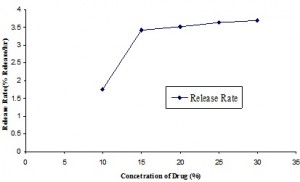 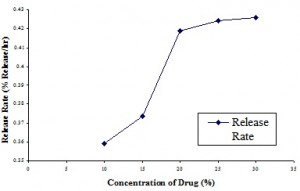 This is obvious phenomenon that the higher loaded matrices release faster due to higher pore formation and high flux due to faster saturation at the diffusion layer. The implants were analyzed before and after dissolution that was shown in figure 9 and the actual drug content in percentage in implants were determined which correlates the dissolution data along with the release rate of drug from the implant and also the drug loss in the gelatin as a small amount of dexamethasone may diffuse in to the gelatin. 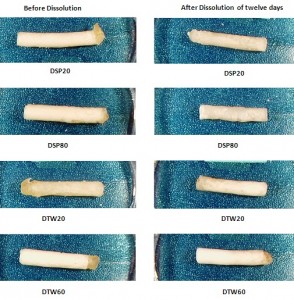 FIG. 9: PHOTOGRAPH OF IN-SITU IMPLANT PREPARED FROM DRUG, EXCIPIENTS AND PLGA IN DMSO

CONCLUSION: Polymeric drug delivery systems are widely used in the pharmaceutical industry for sustaining drug action. But recently, the in-situ implant drug delivery system has gain interest in the field of long-term drug delivery system. The beauty of this system is that it can be injected through traditional needle and syringe but just after injection it became a solid biodegradable implant.

The present study also reveals that it is possible to design and develop in-situ PLGA implant in-vitro in gelatin gel as new drug delivery device for long term therapy. However, further studies have to be conducted in this aspect.