ABSTRACT: The aim of the present study is to evaluate the gum of Curcuma amada (mango ginger) as a tablet binder employing paracetamol as a model drug. Natural gums are economic, easily available and found useful as tablet binder. The physicochemical properties of a gum obtained from the rhizomes of Curcuma amada were characterized by Fourier transmittance infra red (FTIR) and Differential scanning colorimetry (DSC). Amada gum has a glass transition (Tg) temperature and melting peak at 94.3°C. Paracetamol tablets were prepared by wet granulation technique using amada gum as a tablet binder in the concentrations of 1%, 3%, 5%, 7% & 9% w/w and compared with standard binders. The prepared tablets were evaluated for tablet characteristics. The values of granules showed angle of repose good flow property. The hardness of the prepared tablets varies with binder concentration. The prepared tablets showed friability decrease with increases concentration and disintegration time increase with increase the binder concentration. In vitro drug release was also depending on binder concentration. Tablets with 1%and 5% w/w binder concentration showed optimum results than standard binders, thus conclusion was drawn that amada gum was found to be useful for the preparation of uncoated tablet dosage form.

INTRODUCTION: The present investigation is an effort to study the suitability of gum obtained from Curcuma amada as tablet binder. The binder properties of the gum was evaluated and compared with gum & PVP K30. All the chemicals and reagents used in the present study were of analytical grade. Paracetamol was purchased from yarrow chem. Mumbai.

Curcuma amada was purchased from Sri Venketeswra University. Lactose and PVP K30 were obtained from Helios Pharmaceuticals Baddi Himachal Pradesh. Acetone, ammonia, choloroform, Glacial acetic acid, ethanol, ethyl acetate, acetic acid, toulene and dicholoromethane were obtained from S.D. Fine chemicals. Curcuma amada, family Zingiberaceae rhizome was authenticated by DR. K. madhava Chetty in department of Botany from Sri Venkateshwara University, Tirupati-517502, (A.P.) India. The rhizomes Curcuma amada were dried and powdered. The powder of rhizomes was soaked in demineralised water for one day. Boiled for 30 minute and put to cool at room temperature for 1 hour for complete release of gum into water. The material was squeezed within eight fold muslin cloth. The filtrate was precipitated from solution using absolute acetone. The precipitates were separated and dried on hot air oven. The dried gum was stored in desecrator to prevent from moisture.

The separated gum was evaluated for solubility in water, acetone, chloroform and ethanol in accordance with the British pharmacopoeia specifications.

The method adopted was that specified in the B.P 2004 for acacia. 1.0 g of the sample was transferred into each of several Petri dishes and then dried in an oven at 105°C until a constant weight was obtained. The moisture content was then determined as the ratio of weight of moisture loss to weight of sample expressed as a percentage.

Ash content was estimated by the measurement of the residue left after combustion in a furnace at 450°C. The ash obtained from the determination of the ash was boiled with 25 ml of 2M hydrochloric acid solution for 5 minutes and the insoluble matter was filtered. Filtrate was washed with hot water and ignited and the subsequent weight was determined. The percent acid insoluble ash was calculated.

This was done by shaking a 1%w/v dispersion of the sample in water for 5 min and the pH was determined using a digital pH meter.

Swelling index of polysaccharide was determined by using modified method reported. One gram of gum powder was accurately weighed and transferred to a 25mL Stoppard measuring cylinder. The initial volume of the powder in the measuring cylinder was noted.

The volume was made up to 25 ml mark with distilled water. The cylinder was Stoppard, shaken gently and set aside for 24 h. The volume occupied by the gum sediment was noted after 24 h.

Swelling index (SI) is expressed as a percentage and calculated according to the following equation.

Where Wo is the initial height of the powder in graduated cylinder and Wt denotes the height occupied by swollen gum after 24 h.

The static angle of repose was measured according to the fixed funnel and free standing cone method. A funnel was clamped with its tip 2 cm above a graph paper placed on a flat horizontal surface. The powders were carefully poured through the funnel until the apex of the cone thus formed just reached the tip of the funnel. The mean diameters of the base of the powder cones were determined and the tangent of the angle of repose calculated using the equation:

h = height of the cone

r = radius of the cone base

2.0 g quantity powder sample was placed in a 10ml measuring cylinder and the volume, V0, occupied by each of the samples without tapping was noted. After 100 taps on the table, the occupied volume V100 was read. The bulk and tap densities were calculated as the ratio of weight to volume (V0 and V100 respectively).

W= weight of the powder

Vo = Initial volume of the powder

V100= Final volume of the powder

Hausner ratio is an indirect index of ease of measuring the powder flow. This was calculated as the ratio of tapped density to bulk density of the samples.

This was calculated using the equation:

The granules after blending with lubricants and were compressed by using hydraulic press with flat faced punches. The tablets were developed for 400mg weight.

The thickness of the tablets was determined by using digital vernier calipers. Five tablets were used, and average values were calculated.

To study weight variation twenty tablets of the formulation were weighed using an Essae electronic balance and the test was performed according to the official method. Twenty tablets were selected randomly from each batch and weighed individually to check for weight variation.

% Friability of tablets less than 1% are considered acceptable.

Five tablets were weighed individually and powdered. The powder equivalent to average weight of tablets was weighed and drug was extracted in acetone, the drug content was determined measuring the absorbance at 244.4 nm after suitable dilution using a Shimadzu 1800 UV- Vis double beam spectrophotometer.

DT test was carried out according to USP specification. 6 tablets were placed in a disintegration tester (type USP- Electro lab USP- ED-2AL) filled with 7.8 pH at 37±0.20C. The tablets were considered completely disintegrated when all the particles passed through the wire mesh. Disintegration times recorded are the mean of two determinations.

The release rate of paracetamol from tablets was determined using the dissolution test. Test was performed using 900 ml of 7.8 phosphate buffer, at 37 ± 0.5°C at 50 rpm. A sample (5 ml) of the solution was withdrawn from the dissolution apparatus, and the replaced with fresh dissolution medium. The samples diluted to a suitable concentration with 7.8 pH phosphate buffer. Absorbance of this solution was measured at 244.4 nm using a Shimadzu UV-Vis double beam spectrophotometer 1800. Cumulative percentage of drug release was calculated using the equation obtained from a standard curve.

(1) Selection of plant and authentication of plant: Selected plant was authenticated by Dr.R Madhava Chetty at Dept of Botany from Sri Venkateshwra University, Tirupati-517502 A.P. and it was found to be Curcuma amada, Family Zingiberaceae.

Rhizomes of plant are selected for extraction of gum.  The yield of extracted gum was 0.26%/1kg.

Gum extracted from rhizomes of water soluble and found to be insoluble in acetone, ethanol and chloroform. Moisture content was low, suggestion its stability in formations containing moisture sensitive drugs. Low the value of total ash and insoluble ash obtained in this study of indicate low level of contamination.

A 1% w/v solution of gum in water gave a pH of 7.6-8.2. The near neutral pH of gum implies that when used in uncoated tablets.

The peaks observed in Fig. 2 the given spectrum were mainly of carbohydrates or glucose.  It showed the O-H stretch, C-H stretching and C-C Stretch occurred in given sample. 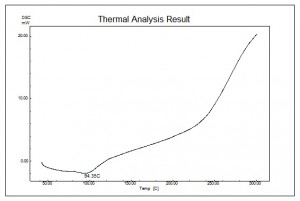 Differential scanning calorimetry (DSC) was used to measure the occurrence of exothermal or endothermal changes with increase in temperature. DSC, because of its sensitivity and accuracy, has been extensively used to study the phase transitions of polymers.

The thermogram for Curcuma amada gum is shown in Fig. 3, showed that the gum has amorphous. Glass transition (Tg) temperature occurred at 94.35°C.

The Preformulation study of drug was carried out by conducting various parameters viz. solubility, melting point and pH determination, and spectral analyses.

The solubility of pure drug in solvent was carried out and found to be soluble in, acetone, and ethanol, insoluble in water.

Melting point of paracetamol was found to be 169°C. From this we concluded that the drug sample is pure.

Estimation of paracetamol by UV spectroscopy:

The absorption spectrum of pure drug was scanned between 200 -400 nm with 10 µg/ml concentration in 7.8 pH phosphate buffer solutions using UV Spectrophotometer. The maximum peak was obtained at 243 nm that was taken as λ max.

Absorbance data for the calibration curve of Paracetamol at 244.4 nm. 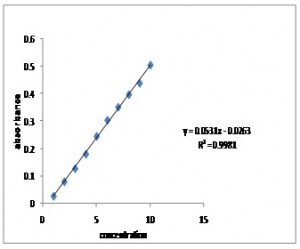 IR spectrum in Fig. 6 shows that the given sample of drug is Paracetamole. The major peaks of given spectrum showed all major function groups present of paracetamole.Compatible study: 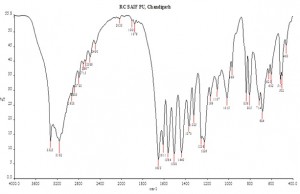 All the characteristic peaks of Paracetamol were present in this spectrum. It indicates compatibility between drug and polymer (Curcuma amada gum). The IR Spectrum values of Paracetamol and amada gum combination.  It shows that there was no significant change in the chemical integrity of the drug. 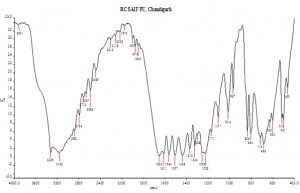 The major peaks of Paracetamol were present in this spectrum Fig. 8. It shows that there was no significant change in the chemical integrity of the drug. Paracetamol and PVP K30 show compatibility.

FIG.9: DSC OF PARCETAMOL AND GUM

Determination of flow properties of granules

Bulk density of a granulation is primarily dependent on particle size, particle size distribution and particle shape. It is an indirect measure of granule flow and determines the die fill volume. The bulk and tapped density of the granules decreases with increasing concentration of binders.

In vitro Dissolution of different binder: 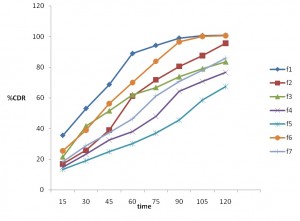 Comparative dissolution of amada gum and PVP K-30 gum. The release was almost   complete with in 105 min. in the case of tablet containing 1% binder (PVP K30and amada gum). Apart of this tablet, contained 9% show delayed release.

CONCLUSION: The present study shows the effect of amada gum as binder in the formulation development of paracetamol tablets in comparison with the standard binders. From the results, it is concluded that, amada gum has a better binding capacity in comparison with standard binder. Even the novel gum used is having high binding capacity. Compressional properties were analyzed using density measurement and the compression the mechanical properties of the tablets were assessed using the hardness and friability of the tablet. Drug release properties of the tablets were assessed using disintegration time and dissolution time as assessment parameters.

Formulations containing amada gum as a binding agent show a faster onset and higher   amount of plastic deformation under compression pressure than those containing PVP K30.The weight variation, disintegration and dissolution times of the tablets increased with increased binder concentration while their friability decreased. Amada gum produced tablets with better mechanical properties and shorter disintegration and dissolution times than those containing PVP K-30.

The results suggest that amada gum could be useful as an alternative binding agent to produce tablets with a particular mechanical properties and release profile.

ACKNOWLEDGEMENT: The authors are highly thankful to the Faculty and management of Akal college of Pharmacy and Technical education, Mastuana Sahib & Helios Pharmaceuticals Baddi, H.P for their kind and generous help.