Introduction: It is well accepted that there is a marked symptomatic improvement in severe depressive illness after electroconvulsive therapy (ECT). Although the antidepressant mechanism of ECT is not well established, the benefit may result from an enhancement of one or more of the monoamine mediated functions in the brain. The assumption is based on results obtained in rats and mice subjected to repeated administration of electroconvulsive shock (Hereinafter referred as ECS) mimicking ECT 1.

Another possibility is that the drugs have an inherent capacity to induce abnormal psychic states, which is unrelated to their anticonvulsant activity. While the adverse effect of anticonvulsant medication has been well documented, there is also evidence that abnormal psychic state may supervene in epileptic patients who are not given drug therapy. In an attempt to define the role of anticonvulsant drugs in the genesis of abnormal mental states, a study was conducted by Bhavsar, Dhumal and Kelkar using phenytoin, carbamazepine and diazepam, with certain specific behavioural models to assess central dopamine (DA), 5-hydroxytryptamine (5-HT) and noradrenaline (NA) mediated functions in rats subjected to repeated administration of ECS. Since the electrically induced seizures mimic the epileptic convulsions, it was hoped that the influence of anticonvulsant drugs on any enhancement of monoamine mediated behavioural responses would be evident in these experiments 3.

sodium valproate is a unique antiepileptic drug with broad spectrum of activity and is widely prescribed in clinical practice. Hence, we selected this drug to study its interaction with monoamine mediated behavioural responses in rats. Such data is available for other antiepileptic medications like phenytoin, carbamazepine and diazepam but not for Sodium valproate.

The study was carried out in Pd. Dr. D. Y. Patil Medical College, Pimpri, Pune. Male Sprague-Dawley rats which were weighed from 140-160g were used in the present study. The animals were maintained on standard laboratory diet (‘Amrut rat pellet feed’ manufactured by Pranav Agro Food, Pune) and had free access to tap water (supplied by Pimpri Chinchwad Municipal Corporation). The rats were maintained under standard conditions of temperature (25ºC ± 5ºC) and relative humidity (55 ± 10%) and a 12/12 h light/dark cycle. The study was approved by the Institutional Animal Ethics Committee. (IAEC permission No. DYPMC/ IAEC/03/2006 dated 12 Dec 2006).

Chemicals used: (All the chemicals were procured from Sigma)

The rats were selected at random and given a single maximal electroconvulsive shock (150 V, 50 Hz sinusoidal w1786ith intensity of 210 mA) for 0.5 sec through crocodile ear clip electrodes from a ‘small for animal convulsiometer’ without any anaesthesia. Only those rats in which tonic and clonic phases of seizure developed fully were taken up for the study.

Rats were divided in four groups with ten rats in each group and treatment duration was kept for ten days in all the groups.

Group I- Control: Rats were given daily 2ml distilled water only.

This model was used to study dopamine mediated behavioural changes.

The stereotypy following the injection of apomorphine hydrochloride (0.3 mg/kg, S.C.) was observed. Observation was started 15 min following the injection of apomorphine, was done for 2 min at 30 min interval for 2 hrs and then at 60 min interval for a total period of 4 h. The degree of stereotyped behaviour observed was assessed using the scoring system as described by Johnson et al. 4 as follows:

This model was used to assess nor-adrenaline-induced behavioural changes.

The degree of sedation was assessed 30 min after injection of clonidine hydrochloride (100 μg/kg, i.p.) 6. Sedation was assessed by removing rat from the cage and transferring them on to the laboratory shelf and observing for gross differences from the naïve rats. The following 6 indices were used and were scored on a 0-4 scale as follows:

The enhancement of monoamine mediated behavioural responses produced by ECS administration was assessed by comparing the result obtained in ECS pretreated group with those in control group. This was done irrespective of whether the animals were pretreated with a drug or not (naive rats). Result from the lithium test were analysed by using student’s t-test; result of apomorphine and clonidine tests were analysed using Mann-Whitney U test. A value of p < 0.05 was considered to be statistically significant. 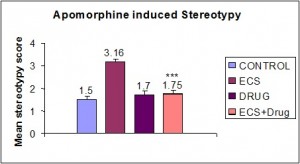 The numbers of head twitches induced by injecting lithium chloride (200 mg/kg, i.p.) were counted every 10 min, starting immediately from the time of injection up to a period of 90 min. The results of this study are shown in Table 2 and Fig.2. 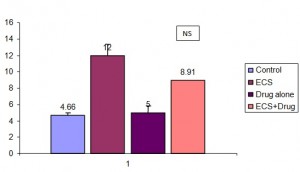 DISCUSSION: Previous studies conducted have given the possibility that in case of ECT, the freedom from occurrence of abnormal mental states enjoyed by epilepsy cases during the active phase of the disease is due to enhanced central monoamine- mediated functions and the antiepileptic drugs retard such enhancement.3 From this standpoint, experimental models involving the use of repeated ECS should be useful to indicate the role of antiepileptic drugs.

The present study was planned to find out the data regarding the effect of sodium valproate on enhancement of monoamine mediated behavioural responses following administration of ECS for ten days to rats. Such data is available for drugs like phenytoin, carbamazepine and diazepam; but not for valproate.

In the present work, we have examined the central monoamine mediated functions using behavioural animal models. It is reported that behavioural changes produced in the rats and mice by increasing brain 5-hydroxytryptaminergic (serotonergic), dopaminergic or noradrenergic functions can be enhanced if animals are pretreated with a single daily ECS for 8-10 days closely resembling the administration of electroconvulsive therapy (ECT) 3, 7, 8. Therefore ECS has been used as a pretreatment in the present study to enhance the monoamine mediated functions using respective agonists for these monoamines i.e. apomorphine-induced stereotypy for dopamine, lithium-induced head twitches for serotonin and clonidine-induced sedation for noradrenaline.

It is well established that administration of apomorphine to rats lead to the production of stereotyped sniffing, licking, and biting behaviour, probably due to stimulation of dopaminergic mechanisms in the striatum 4, 9. Head twitches, induced by lithium chloride is a useful model for quantifying 5-HT activity in the brain and screening of potential antagonists of   5-HT receptors 5.

It is well known that central α2-adrenergic receptor agonists like clonidine produces sedation 6, which is its major side effect. Also this is established fact that wakefulness is maintained by the activities of the cell bodies of locus coeruleus which form the major noradrenergic pathway in the brain. Cedarbaum and Aghajanian10 have shown that microiontophoretic application of α-agonists into this region inhibits the spontaneous firing of locus coeruleus neurons by stimulating the α2 adrenergic receptors located on or near the cell bodies of these neurons, thereby producing sedation.

In the present study, the results of apomorphine-induced stereotypy shows that as compared to the control group there is a significant increase in the stereotypy score in ECS pretreated group (p <0.001 ECS pretreated Vs control group). In various animal models it is reported that there is an acute elevation in the brain content of dopamine and with each ECS 11, 12; there is also an increase in D1-receptor density in the region of rat brain 13. This explains the above observations in our present study.

In the Clonidine-induced sedation model there was statistically significant increase in the sedation score following ECS as compared to the control group (p <0.001 ECS pretreated Vs control group). This shows that central α2 agonist like clonidine produces sedation by activating noradrenergic pathways.

Modulation of dopaminergic system by valproate:

Apomorphine-induced stereotypy is described in the literature as a model to study the dopaminergic system. But valproate prevented the ECS induced enhancement in the stereotypy score in the test group (p <0.01 Test group Vs ECS pretreated group). This can be explained by GABA mimetic effect of valproate. GABAergic agents are known to potentiate the action of neuroleptics and exert some intrinsic antidopaminergic activity as inhibition of stereotypy or hyperactivity induced by dopamenergic drugs. This action is being attributed to GABA ergic inhibition of dopaminergic neurons15

However, this alteration of dopaminergic functions by valproate might play some role in its antipschycotic activity. This inhibitory effect of valproate is seen after ECS pretreatment, but not when given alone.

Modulation of Serotonergic system by valproate:

In the present study, head twitches were significantly reduced in test group as compared to ECS pretreated group (p<0.001)Test group Vs ECS pretreated group). Animal studies have suggested enhanced responsivity of serotonin-mediated behaviour after repeated ECS and increased density of 5-hydroxytryptamine receptors 15. This attenuation of serotonergic action by valproate might explain its therapeutic efficacy in migraine.

Modulation of noradrenergic system by valproate:

CONCLUSION: It can therefore be concluded that valproate decreases the activity of dopaminergic, serotonergic system and has no significant effect on noradrenergic system. It is possible that restoration of enhanced monoamine level in the brain, to nearby normal level may play a role in the therapeutic efficacy of valproate in other CNS disorders. Further it might be concluded that attenuation in dopaminergic mediated responses could be due to GABA like action of valproate which may substantiate its known action in the treatment of epilepsy patients.

Conflict of Interest: The authors do not have any conflict of interest.