The in vitro dissolution studies of encapsulated sodium salicylate granules coated with beeswax is presented. The factors investigated were the effects of concentration, presence of a hydrophilic fatty material, polyethylene glycol 6000 (PEG 6000), and technique (pan-coating, fusion and granulation) on the sustained release of drug when coated with beeswax. Comparison of release rates was based on the use of a parameter, t70% (time for 70% of drug to be released). The greater the concentration of beeswax, ranging from 13.04 to 28.75%, the more prolonged the release. The presence of PEG 6000 at a concentration of 1:9 beeswax in the coating fluid significantly (p<0.05) increased the release rate, and at a concentration of 1:1 nullified the sustained release effect of beeswax. The t70% for the fusion, granulated and pan-coated batches were in the increasing order of 25min., 1hr.35min. and 2hr.45min, respectively.

INTRODUCTION:Prolonged release drug dosage forms have been found necessary in cases where a sustained action of the drug is needed over a specific time frame 1. The dosage form should be able to release the medicament in a controlled and predictable manner 2.

Formulation methods include embedding or fusing the drug in a matrix, coating the drug by pan-coating, spray-congealing, spray-drying and coating of fine particles of drugs 3. The rate of release is evaluated by in vitro dissolution tests 4, and in vivo absorption measurements 5. However, in vitro data must be correlated with in vivo data 6.

In their study, El-Sabbagh, et al.,7, summarised that beeswax can be prepared as a mixture with the drug and it then functions as a time release mechanism, releasing the drug over a longer period of time. When beeswax was compared with carnauba wax, it was reported that both waxes retarded release of the drug after 12 hours and increased the time required for 50% drug release, but beeswax showed significant influence 8. The pan-coating technique has been successfully used in a slow-release study that made use of beeswax 9. A correlation between in vitro and in vivo data for sustained release delivery systems has been reported using acetaminophen as the drug 10.

The aim of the present study is to determine three things, viz., the effect of various concentrations of beeswax on the release rate of the drug; the effect of the presence of a hydrophilic substance, such as Polyethylene Glycol 6000 on the retarding effect of beeswax; and the difference, if any, between the prolonging effects of beeswax on release rate when applied by pan-coating, fusion and granulation methods to the medicament.

The drug used is sodium salicylate. The parameter used is the t70% (time for 70% of drug to be released), and the dosage form is encapsulation.

Preparation of Beer’s Curve for Sodium Salicylate: Serial dilutions of sodium salicylate solution in distilled water, incorporating a ferric nitrate solution in hydrochloric acid was used to determine the wavelength of maximum absorption (λmax) of the violet coloured salicylate-ferric ion complex, to be 540nm. A standard Beer’s Curve for sodium salicylate, at 540nm was then obtained using serial dilutions of sodium salicylate (Fig. 1).  This formed the basis of determining the various preparations, after taking their absorbance values.

Study of Various Concentrations of Beeswax: The granulation method was used to prepare the granules of sodium salicylate containing the various concentrations of beeswax: 28.57%, 25.93%, 16.67%, and 13.04%w/w. In all these batches, the weight of sodium salicylate and the diluent used for the formulation, lactose, were kept constant at 1g and 9g, respectively, while the weight of the beeswax was varied to obtain its different concentrations at 4g, 3.5g, 2g, and 1.5g, respectively.

In this method, sodium salicylate powder was granulated, using beeswax as the binder-substance. In preparing the granules, the sodium salicylate and lactose were initially passed through a 250µm mesh sieve, and then used for the formulations. After preparation of the different batches, the granules were passed through a 1.00mm mesh sieve before filling into the capsules, to maintain a constant particle size throughout.

The sodium salicylate was mixed with the lactose and transferred to an evaporating dish. The required quantity of beeswax was weighed, melted and dissolved in 10ml chloroform; this solution was then poured unto the powder mix in the dish. The powder was properly mixed with the ‘granulating’ fluid and stirring continued till the mixture became cohesive, then the ‘damp’ mass was passed through 1.7mm mesh sieve. The granules obtained were spread and left for 6 hours to dry in air, when the chloroform evaporated. It was then passed through 1mm mesh sieve to obtain smaller granules. To eliminate fines, these granules were shaken in a 250µm mesh sieve, and the granules retained used for the dissolution tests. The data obtained is given in figure 2.

Study of the Effect of PEG6000 on Beeswax Retarding Ability: The granulation method was used to prepare the four batches of granules used for this study. Two batches contained Beeswax: PEG6000 in a ratio of 9:1, and 1:1, respectively. The third batch contained only PEG6000 as the coating material, and the fourth batch was uncoated, it contained neither beeswax nor PEG6000, serving as control.

The sodium salicylate was mixed with the lactose by geometric trituration, and poured into an evaporating dish. The PEG6000 was weighed, melted and dissolved with 2ml of ethanol, in an evaporating dish. In a separate dish the weighed beeswax was melted and dissolved by part of the required volume of chloroform. This beeswax solution was then transferred into the PEG 6000 solution and mixed; this mixture was then transferred to a measuring cylinder and made up to 10ml with the chloroform used in rinsing the evaporating dishes.

These procedures were carried out while the solutions were still warm. The warm solution was then poured unto the powder mix in the evaporating dish, properly mixed and processed using the same procedure as for the beeswax granulated batches. The granules obtained were used for the dissolution tests. Except for the weights of beeswax and PEG 6000, and the volumes of the chloroform and ethanol used the procedure for the preparation of the 1:1, beeswax: PEG 6000 batch was exactly the same as for the 9:1 batch.

Study of the effect of Formulation Technique on Beeswax Coating ability: The three techniques investigated were Pan-coating, Fusion and Granulation. In the Pan-coating method, granules of sodium salicylate prepared using gelatin as binder were pan-coated with beeswax. But, in the Fusion method, sodium salicylate powder was fused in a molten mass of beeswax, and the fused mass subsequently grated and sieved to obtain the granules. And, in the granulation method, sodium salicylate powder was granulated using beeswax as the binder-substance.

For the sake of comparison, the amount of beeswax in both the pan-coated and granulated batches was kept at 28.57%. However, in the fusion batch it was 80% because of the fact that the beeswax was needed to provide a molten matrix into which the sodium salicylate powder was fused.

Preparation of the Fused batch: 5g of sodium salicylate and 3g of lactose were intimately mixed and introduced with stirring, in small portions, into the molten mass of 40g beeswax in a dish over a hot water bath. The dish was then set down and allowed to cool while vigorous stirring was continued. After complete cooling, the fused mass was broken down using a grater. These particles were mixed with further 2g lactose, first passed through a 1.7mm mesh sieve, and then finally sieved through a 1mm mesh sieve before being used for the dissolution tests. These granules contained 80% of beeswax as coating material. The data obtained is given in Fig. 4.

Dissolution Tests: The apparatus used for the dissolution tests in this work is that described under Dissolution Test for Tablets and Capsules, in the British Pharmacopoeia11. At prescribed time intervals, 10ml sample aliquots were withdrawn from the dissolution medium, filtered and developed by the prepared ferric nitrate solution, and its absorbance measured. The concentration of the solution was read off from the beer’s curve, and its percent release calculated. The percent release for each batch was then plotted against the time, as shown in Figs.2, 3 and 4. These represent the three separate groups of experimental formulations under investigation.

Statistical Analysis: All data were obtained in triplicates, and the means calculated and utilized. Analysis of variance was performed by ANOVA procedures and p<0.05 was considered to be statistically significant.

RESULTS AND DISCUSSION: The analysis and interpretation of the data was based on percent-release time plots, and the release profiles obtained were conveniently compared using the parameter t70% (time for 70% release).

Before the first hour, and after the second hour, there is no significant difference in the release rates of the beeswax in the concentrations used. 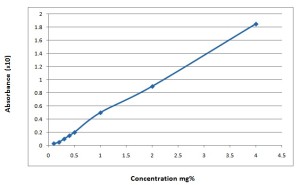 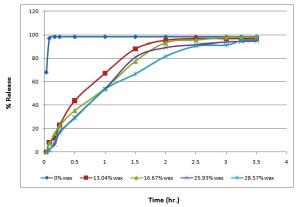 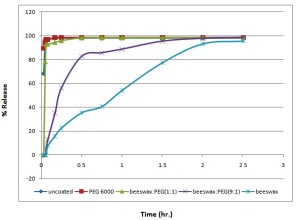 FIG. 3: DISSOLUTION OF SODIUM SALICYLATE FROM CAPSULES OF UNCOATED AND COATED GRANULES

In Fig. 3, the t70%  were in the increasing order of 2min. for the uncoated batch, and the PEG 6000 coated batch; 3min. for the batch coated with 1:1 beeswax to PEG 6000; 20min. for that coated with 9:1 beeswax to PEG 6000; and 70min. for that coated with beeswax alone. Each of these four coated batches contained 16.67% of coating material. This shows that incorporating PEG 6000 to the extent of only 10% (1:9) in the beeswax granulating fluid significantly increased the release rate, and at 50% (1:1) it countered the retarding effect of beeswax. The release profiles for both the uncoated granules and the PEG 6000 coated granules showed no significant difference because of the high solubility of this fatty material in water. 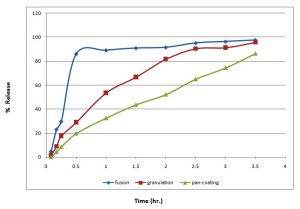 The t70% for the fusion, granulation and pan-coating batches were about 25min., 1hr.35min, and 2hr.45min, respectively (Fig. 4). The significantly (p<0.05) high initial release rate exhibited by the fusion batch is attributed to the fact that the subsequent grating and sieving of the fused mass caused fracture of the coating, giving rise to immediate release of the drug. Such a sharp difference in rate was not observed with the pan-coated batch because preformed granules were coated. In the case of the granulated mass, a gradual curve was obtained because the beeswax present in the granulating fluid coated first the fine particles, and then the granules when the “wet” mass was sieved.

In addition, the granulation method provided a more accurate and easier means of practically controlling the concentration of beeswax in the formulations. This is an advantage over the pan-coating technique. On the other hand, the pan-coating technique showed a higher value for t70% because the coated granules were not subjected to further sieving before encapsulation. Thus the coating remained intact, and provided a more prolonged release profile.

CONCLUSION: In this work, we have been able to establish that the method of formulation, the concentration of the retardant, and the presence of a hydrophilic material, even as a contaminant, are critical to obtaining a desired prolonged release formulation, using beeswax as the retardant. Further work in this area needs to be done to establish if the in vitro data would correlate with in vivo absorption profiles from these formulations.