Archana Tripathi * and B. Lakshmi

ABSTRACT: Tannase (Tannin acylhydrolase E. C. 3.1.1.20) is a ubiquitous enzyme catalyzes the hydrolysis of ester and depside bonds of hydrolyzable tannins, releasing glucose and gallic acid. Gallic acid is used in the food industry as a substrate for the chemical synthesis of food preservatives such as gallates and pyrogallol, propyl gallate being a very important food antioxidant and in the pharmaceutical industry, for the synthesis of antibacterial drugs. Tannase is also utilized for bioremediation of effluents from tanneries. A number of bacteria and fungus has been reported to produce tannase, but tannase-producing actinomycetes have not been reported. So, the present study was undertaken to isolate actinomycetes with the ability to produce tannase enzyme. A total of 30 microorganisms was isolated by enrichment culture technique using tannin as carbon source. The tannase producing strain AT 9 was selected based on the zone of tannic acid hydrolysis. AT 9 was identified as Streptomyces gancidicus based on 16s rRNA. Streptomyces gancidicus showed maximum tannase production when cultured in mineral medium using 4 plugs of culture were used as inoculum size, 2% tannic acid as carbon source and ammonium chloride (0.6%)as nitrogen source. The optimum temperature and pH required for maximum enzyme production was 30 ºC and 6.5 pH, respectively.Ca+2 plays a significant role in tannase production by Streptomyces gancidicus.

INTRODUCTION: Tannin acyl hydrolase (EC.3.1.1.20), commonly referred to as tannase, is an attractive biocatalyst for tannin biodegradation 1, 2. Tannase enzyme hydrolyses tannins as the natural substrate. These (tannins or tannase) are widely distributed in various parts of plants such as in barks, needles, heartwood, grasses, seeds, and flowers. Tannins are a group of complex oligo-meric chains characterized by the presence of polyphenolic compounds.

These have a molecular weight higher than 500 and reaching up to 20,000 kDa. One of the major characteristics of tannins is its ability to form strong complexes with protein and other macro-molecules such as starch, cellulose and minerals 3. Tannase has shown many potential applications in different industrial sectors, like the brewing industry, food industry 4, leather industry, in environmental pollution treatment 5 and has been associated with colon cancer allocating the possibility of bacterial tannase as a biomarker for colon cancer 6.

An attempt was also carried out to optimize growth medium and enzyme assay conditions for maximum production of crude tannase by Streptomyces gancidicus.

Chemicals: The chemicals used throughout the study were of analytical reagent grade and obtained from Sigma, Aldrich, and Merck.

Collection of Samples: The tannery effluent sample was collected from the Central Leather Research Institute (CLRI), GIDC (Gujarat Industrial Development Corporation), Ahmedabad, Gujarat, India in sterile polypropylene bottles. Microorganisms were isolated from the soil samples contaminated by dye, catechu, and tea waste as well as from the soil near the roots of Amla and Jamun trees and tannery effluent of CLRI.

Enrichment, Isolation, and Identification of Tannase Producing Microorganisms and Estimation of Tannase Activity: The methods of enrichment, primary and secondary screening for tannase isolates were carried out 7. The tannase activity was estimated by a modified spectro-photometric method 8. The potential bacterial strain was characterized by cultural, morphological (Gram Staining and growing on different media (Glucose Aspergine Agar, Nutrient agar, Czapek dox agar, Bennett’s Agar, Potato Dextrose agar and Glycerol Aspergine agar)), physiological, biochemical methods. The culture was subjected to genotyping using 16s rRNA sequencing. The sequencing was carried out at Gujarat State Biotechnology Mission (GSBTM). The partial 16S rRNA sequence (1400 bp) of the isolate has been submitted to Genbank. (The highest tannase activity was shown by the strain coded AT 9, and it was identified as Streptomyces gancidicus).

Optimization of Tannase production by AT 9 (Streptomyces gancidicus) Under Submerged Fermentation: Various cultural and nutritional parameters that influenced enzyme yield during submerged fermentation (SmF) were optimized.

Study on the Effect of Inoculum Size, Temperature, and pH on Tannase Production: The activity of an enzyme is affected by its environmental conditions.

Effect of Metal Ions on Tannase Activity: Various metals play a major role in tannase activity. They act as inhibitors or stimulators. Metal ions like Mg+2, Mn+2, Ca+2, Na+, and K + stimulated the tannase activity, while Cu+2, Fe+3, and Co+2 acted as inhibitors of the enzyme. Different metal ions like ZnSo4, MnSo4, CuSo4, and CaCl2 with 1 mM concentration were added in TA broth, and their roles in tannase enzyme produced by the isolate were studied.

Primary/Qualitative Screening of Bacterial Isolates for Tannase Production: A total of 30 microbes were isolated from the tannery waste by serial dilution and plating on mineral salt agar medium (supplemented with tannic acid as a sole source of carbon) of these 30 isolates, 15 tannase producers were selected on the basis of tannic acid hydrolysis zone formation. The zone formed by isolates on Tannic Acid Agar (TAA) plates were not very clear and was not differentiable between tannase producing and non-tannase producing bacteria. Many researchers 9, 10, 11 reported about tannase screening methods, but all the methods are time-consuming and less sensitive, which have made these limited towards specificity determination and the isolation and screening of bacteria. To overcome this, the TAA plates were flooded with Gram’s iodine instead of FeCl3.Gram’s iodine formed a dark brown complex with tannic acid but not with hydrolyzed tannic acid and giving a sharp, distinct zone around the tannase producing microbial colonies even in cases of low levels of tannase production within 3-5 minutes. In the present technique, gram’s iodine reacted with the tannin protein complex, yielding a brown to black color, providing a dark background allowing clear visibility of zones of tannic acid hydrolysis Fig. 1A. Actinomycetes isolate AT 9 which showed a maximum (19 mm) diameter of zone of hydrolysis, was selected for further studies.

Morphological Characteristics of AT 9: AT 9 formed a white, powder colony on the TAA plate. Gram’s staining and microscopic view revealed a gram-positive, filamentous structure Fig. 1B.

FIG. 1: (A) ZONE OF TANNIC ACID HYDROLYSIS BY VARIOUS ISOLATES ON TAA PLATE  (B) GROWTH OF AT 9 ON TAA PLATE AND MICROSCOPIC VIEW OF AT 9 AFTER GRAM STAINING (1000X)

Culture Characteristics of AT 9 on Different Media: AT 9 was grown on different media (Glucose Aspargin Agar, Nutrient Agar, Czapek Dox Agar, Bennett’s Agar, Potato Dextrose Agar, and Glycerol Aspargine Agar) to study the growth pattern. A comparison of the growth of isolate on different media is shown in Fig. 2. The color of aerial mycelium of AT 9 was found white on Nutrient Agar, Potato Dextrose Agar, and Czapek Dox Agar. In Glucose Aaspargine Agar, AT 9 gave grey mycelium color. The aerial mycelium of AT 9 in Glycerol Aspargine Agar was dark brown in color. 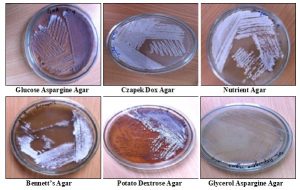 FIG. 2: GROWTH OF ISOLATE AT 9 ON DIFFERENT MEDIA

Biochemical Characteristics of Isolate AT 9: The biochemical characterization of AT 9 was carried out for identification purposes. AT 9 cultures utilized arabinose and gave good growth in the medium. No growth was observed with sucrose, mannitol, and Trehalose, glucose. Cellulase, Lipase and xylanase production were observed by the culture. Nitrate reduction and arginine utilization were positive, while Citrate utilization and ONPG utilization,malonate utilization were negative.

Characterization of Bacterial isolate by 16s rRNA Sequencing: The isolate AT 9 showing tannase production was identified at GSBTM by sequencing, the obtained sequences of tannase producing isolate were compared with deposited sequences in NCBI database, using BLAST as a search tool.

In most cases, the high identity values obtained allowed us to assure that AT 9 isolate belongs to Streptomyces spp. with identity values 100 %. An evolutionary study done by using the 16S rRNA sequence for actinomycetes reveals that in the phylogenetic tree the position of AT 9 is nearby the Streptomyces gancidicus.

The sequence data of isolate AT 9 was deposited in the Gene bank Database under the accession number MF464014. The phylogenetic tree was constructed via the neighbor-joining algorithm using the Blast package Fig. 3.

FIG. 3: UNROOTED TREE SHOWING THE PHYLOGENETIC RELATIONSHIPS OF MEMBERS OF THE GENUS STREPTOMYCES AND SOME RELATED SPECIES. THE TREE, CONSTRUCTED BY USING THE NEIGHBOR-JOINING METHOD

Optimization of Physicochemical Parameters to Maximize the Production of Tannase by Streptomyces ganncidicus:

Effect of Inoculum Size on Tannase Activity: Tannase activity of Streptomyces ganncidicus was maximum when 4 plugs of culture were added to inoculation medium (TA Broth).

The enzyme activity of the bacterium at 24 h was 3.9 U/ml/min. The activity decreased after 48 h and again increased after 72 h. The results are represented in Fig. 4. 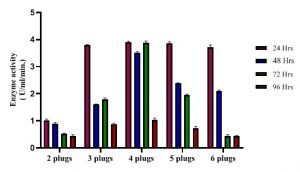 Temperature is also another critical factor that needs to be controlled and optimized. The significance of the optimum temperature in the development of the fermentation process is such that it could determine the inhibition of growth, cell viability, and death. In general, an increase in the temperature of the fermenting medium due to respiration. The highest Tannase activity was observed at 30 ºC (3.55 U/ml) at 72 h of incubation, it indicating maximum production of tannase enzyme by Streptomyces ganncidicus cultures at 30 ºC Fig. 5A The activity decreased as the temperature increased.13

Tannase production increased by 2% tannic acid concentration, it was 3.39 U/ml/min after 72 h of incubation, and it was further decreased, or the concentration of tannic acid measured. The results are presented in Fig. 5C. Metals play a major role as cofactors in enzymes. Fig. 5D showed the tannase activity of AT 9 (Streptomyces gancidicus) when different metals at a concentration of 1 mM was added to TA broth.

From all the metal ions, the addition of CaCl2 in TA broth induced maximum tannase production, and the production was maximum after 72 h of incubation (3.060 U/ml/min).

The results thus show that Ca+2 is an inducer for tannase production and Mn2+ is acting as an inhibitor for tannase production. CaCl2 to be the most suitable for tannase production by Aspergillus japonicus as compared to the other used mineral salts (NaCl, KCl, CuSO4, MnSO4, FeSO4, ZnSO4 and CdSO4) 19. The inhibitory effect of heavy metal ions is well documented in the literature 18. Further, the decreased activity in the presence of divalent cations could be due to the nonspecific binding or aggregation of the enzyme. Tannase from A. oryzae and P. chrysogenum were heavily inhibited by Zn2+, Cu2+, and Fe2+. 20

Effect of Carbon and Nitrogen Sources on Tannase Production: In submerged fermentation, the concentration of tannic acid was found to be a crucial factor influencing the levels of enzymes it is evident from Fig. 6A that only tannic acid supported the significantly higher value of tannase activity (6.27 U/ml/min). Other carbon sources like lactose, glucose, sucrose and fructose did not show any significant effect on tannase production. Thus, from the results, it was evident that only tannic acid serves as a better carbon source for tannase production.

To determine the best nitrogen source for tannase production, Sodium nitrate (0.6% w/v) was replaced with different inorganic and organic nitrogen sources in the production medium. All the nitrogen sources used % equivalent nitrogen similar to that of 0.6% (w/v) sodium nitrate, and the results are presented in Fig. 6B. In the present study, the maximum tannase activity was exhibited by ammonium chloride at 48 h of incubation with 9.64 U/ml/min tannase activities. The report is similar to S. marcescens, which gave 0.75 U/mL of enzyme activity 21.

FIG. 6: EFFECT OF DIFFERENT CARBON (6A) AND NITROGEN SOURCES (6B) ON TANNASE ACTIVITY BY STREPTOMYCES GANNCIDICUS

CONCLUSION: A tannase producing actinomycetes AT 9 was selected from the isolates obtained from soil samples collected from CLRI located in Naroda, Ahmedabad, Gujarat, on the basis of the zone of hydrolysis formed on TAA agar plates. The AT 9 was identified as Streptomyces gancidicus, Gen Bank Accession Number MF 464014.

A. Tripathi * and B. Lakshmi