ABSTRACT: The disease causing bacteria have evolved the genetic ability to transmit and acquire resistance to drugs used as therapeutic agents. The discovery of antibiotics to combat these pathogens marked a resolution in the 20th century. Unfortunately, because of the inappropriate use of antibiotics in human and veterinary medicine, certain strains of bacteria and fungi developed the ability to produce substances which block the action of antibiotics or change their target or ability to penetrate cells. One way to prevent antibiotic resistance is by exploring new bioactive compounds from traditional medicine which is not based on the existing synthetic antimicrobial agents. Phytochemicals from medicinal plants showing antimicrobial activities have the potential of filling this need, because their structures are different from those of the more studied microbial sources. The present study was conducted to evaluate the antimicrobial activity from ethanolic extract against different life threatening pathogenic microorganisms and screening for various phytochemical constituents of Lawsonia inermis Linn. According to the results obtained from current investigation, ethanolic extract of Lawsonia inermis found to possess good antibacterial properties over a wide range of disease causing gram positive as well as gram negative bacteria. Phytochemical study reveals the presence of Saponins, Tannins, Steroids and Anthraquinones in the ethanolic extract

INTRODUCTION: Medicinal plants are nature’s priceless gift to human. The acceptance of traditional medicine as an alternative form of health care and the development of microbial resistance to the available antibiotics has lead researchers to investigate the antimicrobial activity of plant extracts. 1, 2 The increase in prevalence of multiple drug resistance has slowed down the development of new synthetic antimicrobial drugs, and has necessitated the search for new antimicrobials from alternative sources. 1

Herbal medicines are in great demand in the developed as well as developing countries for primary healthcare because of their wide biological and medicinal activities, higher safety margins and lesser costs. Medicinal principles are present in different parts of the plant like root, stem, bark, heartwood, leaf, flower, fruit or plant exudates in the form of secondary metabolites.3 These secondary metabolites need to be extracting out and studied to determine the novel drug compounds.

The Lawsonia inermis Linn belongs to the family Lythraceae commonly used in the Indian traditional system of medicine. Lawsonia inermis known as henna is a woody and flowering plant found in north Africa and south west Asia.4, 5, 6 A much branched glabrous shrub or small tree. Leaves are small, opposite in arrangement along the branches, sub-sessile, greenish brown to dull green, elliptic to broadly lanceolate with entire margin, petiole short and glabrous and acute or obtuse apex with tapering base. Young branches are green in colour and quadrangular which turn red with age. Bark is greyish brown, Inflorescence is a large pyramid shaped cyme. Flowers are small, about 1 cm across, numerous, fragrant, white or rose coloured with four crumbled petals. Fruit is a small brown coloured round capsule. Seeds are about 3 mm across, numerous, smooth, pyramidal, hard and thick seed coat with brownish coloration.7 Flavonoids which were reported from Lawsonia inermis is having many pharmacological activities, antimicrobial, antioxidant, cytotoxic, chemo-prevention activities and they possess strong anti-proliferative effects related to inhibition of cell cycle progression and apoptosis induction. Henna has been used to treat skin infections such as tinea and it is known to have antibacterial properties which have been attributed to naphthoquinones, including lawsone.8,9

Collection and processing of plant material:

The leaves of Lawsonia inermis were collected from the local area and taken care for its freshness, healthy and free from any deformation. These leaves were dried at room temperature then blended into powder by mixture blender which then passed from the sieve to get the equal size particles. The powder should be aseptically kept in air tight container at the moisture free place.

For the extraction of Lawsonia inermis leaves the selection of solvents is done with care to meet extrability and regulatory criteria. Depending upon the solubility ethanol was selected for the extraction procedure.

100gm of powder is accurately weight and is transferred to the cup made up of ‘Whateman filter paper’ and placed into the extraction thimble. 500ml of ethanol was taken in round bottom flask and heated up to its boiling point, i.e. 650C.  The ethanol gets evaporated and moved in to the condenser where it was converted in to liquid trickled in to the extraction chamber containing the plant material. The powder was extracted for 48 hrs. At the end of the extraction   process, the flask containing the ethanolic extract was removed and extract was condensed at 500C in water bath for overnight. The weight of extract was measured and percentages of yield of the plant material were calculated. The extract was stored at 40C for further work. 5, 6

All the test organisms were screened for the antibacterial activity against ethanolic extract of Lawsonia inermis by agar well diffusion method. With the introduction of variety of antimicrobials it becomes necessary to perform the antimicrobial susceptibility test. For this the antimicrobial agent was allowed to diffuse out into the medium and interact in a plate freshly speeded with the test organism. Stock solution of ethanolic extract of Lawsonia inermis was prepared to carry out the antimicrobial activities against selected cultures for the further process. For the preparation of the stock solution 1 gm of ethanolic extract was accurately weight and dissolved in 10 ml of DMSO; giving concentration of the stock solution as 100 mg/ml. this solution is then centrifuged and supernatant liquid was collected in a separate test tube, covered with paraffin wax and stored at 40C for further use.

The Muller-Hinton agar plates for the bacteria were prepared 0.1 ml of fresh 18 hours old broth culture was spread on the respective media. After spreading the culture, wells of 6 mm in diameter was made at the centre of the plate by using sterile cork borer. The wells were open with the help of sterile forceps. Then 100 µl of stock solution was added by using micropipette in each well. The final concentration in the well was 10 mg/ml. The extract was allowed to diffuse; hence the prepared plates were kept in deep fridge.

The ethanolic extract of Lawsonia inermis leaves was screened for the phytochemical content by using different chemical test for each component. The ethanolic extract of the leaves was used for the phytochemical test to detect the presence of alkaloids, tannins, saponins, flavonoids, cardiac, glycoside, anthraquinone and steroids according to standard method. 1

The qualitative analysis was made by using TLC. The compounds in the extract have been proceeds for the separation of by thin layer chromatography. For Lawsonia inermis extract Chloroform: Benzene: Ethanol (45:45:10) was used. Silica gel plates were prepared and dried in hot air oven at 1100 C for 15min. the test sample was plotted on the TLC plate & plate was run in the solvent system. After running the solvent front up to one third portions, the plate was taken out and visualize under the U.V. transilluminator and Rf values for the respective bands were measured. 5, 20

Table 1 shows agar well diffusion method for demonstration of antimicrobial activity of ethanolic extract of Lawsonia inermis against gram negative bacteria. The zone inhibition around the well observed for gram negative bacteria varies from 16mm-24mm in diameter with highest for Vibrio cholerae at 24.5mm and lowest for Pseudomonas aerogenosa at 16.8mm. Results show that bacteria are sensitive to ethanolic extract of leaves. (Fig.1) 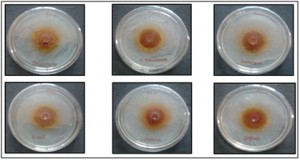 FIGURE NO.1: ZONE OF INHIBITION (IN MM) OF LAWSONIA INERMIS AGAINST GRAM NEGATIVE BACTERIA

Table2 shows agar well diffusion method for demonstration of antimicrobial activity of ethanolic of from Lawsonia inermis against gram positive bacteria. The zone of inhibition around the well observed for gram positive bacteria varies from 20mm-26mm in diameter with highest for Streptococcus faecalis at 26.3 mm and lowest for Streptococcus pyogenes at 20.7mm. Result shows that bacteria are sensitive to ethanolic extract of leaves. (Fig. 2 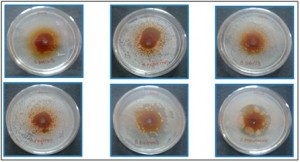 FIG.2: ZONE OF INHIBITION (IN MM) OF LAWSONIA INERMIS AGAINST GRAM POSITIVE BACTERIA

DISCUSSION: In this study the result showed that henna sample from local region of Pusad city, demonstrated antimicrobial activity against different bacterial pathogens. The ability of plant extract to inhibit the growth of all the tested organisms indicates its broad spectrum of activity. (Fig.1 and 2) Herbal medicines are valuable and readily available resources for primary health care and complementary health care system. These plants may prove to be antimicrobial activities, but more pharmacological investigations are necessary. Present time the emergence of multi-drug resistance in human and animal pathogenic microbes as well as undesirable side effects of certain antibiotics has triggered immense interest in the search for new antimicrobial drug of plant origin.

Fatimah Rahiman et al in 2013 reveled the henna leaves in vivo had more antibacterial potential as compared to henna leaves in vitro. Alluri and Majumdar in 2014 showed that methanol extracts at 2mg/ml shows zone of inhibition as S.aureus (16.5±0.15) E. coli (19.1±0.29) P.aeruginosa (17.2±0.18). The results obtained for the phytochemical test shows correlation with previous studies in some ways and contradiction in some other ways. In present investigation, the phytochemical screening of ethanolic extract of Lawsonia inermis shows the presence of four phytochemical out of seven for which screening has performed. The ethanolic extract shows the presence of Saponins, Tannins, Steroids and Anthraquinones. (Table 3)

In current study, the thin layer chromatography of ethanolic extract shows separation of three components under ultraviolet light with Rf values of 0.29(green spot), 0.37(yellow spot) and 0.72 (violet spot) respectively by using Chloroform: Benzene: Ethanol (45:45:10) as a solvent system. (Fig.3) Similar Rf values were reported by Sharma et al in 2012 by using Toluene: Ethyl acetate (9:1). Singh and Kaur in 2014 shows the separation of three spots with Rf values at 0.51(green colour), 0.32(brown colour) and 0.71 (red colour) respectively. Nasir Hassan Wagini (2014) found that TLC profiling of Nigerian and Egyptian henna extracts gives an impressive result that shows 9 different bands of chemical compounds with Rf value of between a minimum of 0.20 to 0.86.

CONCLUSION: Earlier literature indicated that medicinal plants are the back bone of the traditional medicine and the antimicrobial activity of the plant extract is due to different chemical agent in the extract which were classified as active antimicrobial compounds. It is supposed that lawsone acts on the –SH groups in the cellular development. This is supported the fact that cysteine acts as an antagonist to its action. Synthetic lawsone and isolated naphthoquinone fraction are reported to show immunostimulant activity. 22, 23

The present study and data revealed that the antimicrobial activity of Lawsonia inermis Linn. was found to be best against pathogenic bacterial isolates and the phytochemial analysis showed the factors which are found in the form of secondary metabolites were responsible for antimicrobial activity.