ABSTRACT: Habenaria plantaginea Lindl. (Orchidaceae) is used as a medicinal plant in several countries. In this study, ethanol, chloroform and water extracts of Habenaria plantaginea were evaluated for antibacterial activity against bacterial (MTCC) strains. Antibacterial activity of this plants extracts were performed using agar disc diffusion method. The antibacterial activity of ethanol extracts showed more effective followed by water and chloroform extracts against all the bacterial strains. Preliminary phytochemical studies were performed for the presence and absence of secondary metabolites in the whole plant. The Minimum Inhibitory concentration (MIC) exhibited by H. plantaginea extract against the bacterial strains ranged between 0.125 mg/ml to 6 mg/ml.  The presence of bioactive constituents is associated with the antimicrobial activity of various solvent extracts of this plant was carried in attempt to support the use by medicinal practitioner for the treatment of various diseases. Medicinal importance of this orchid will target to meet the therapeutic demands.

INTRODUCTION: In India, orchids from 10% of the world orchid flora with Himalayas as their natural home 1 and the largest and commercially important flowering plants that over 22,500 species with 779 genera are distributed throughout the world 2. There are 1331 species belonging to 186 genera widely distributed throughout the country 3. The medicinal importance of orchids is known as early as 250 – 300 BC by susruta and vagbhata in ancient Sanskrit literature. Some orchid species reported to contain alkaloids, triterpenoids, flavonoids and stilbenoids.

Ashtavarga is a group of 8 drugs in Ayurvedic formulation which are used for the preparation of tonics, such as ‘Chyavanprash’ which consists of  Orchid species, Viz. Habenaria intermedia D. Don, (Riddhi), Habenaria edgeworthi Hook. F. (Vriddhi), Malaxis acuminate D. Don, (Rishbhaka). Besides these species, many Orchid species are widely used as traditional medicines by people and used in pharmaceutical industries to isolate anthocyanins, stilebnoids and triterpenoids. Some of the phytochemicals like alkaloids, anthocyanins, arundinan, bibenzyl, cypripenndin, dendrobins, gigantol, glucoside, glycosides, gymopusin, hircinol, jibantine, kinsenoside, loroglossin, nidemin and orchinol, phenanthropyran, rotundatin and moscatin are reported from Orchids 4. In India and other parts of the world use many orchid species in their traditional system of herbal medicines. Herbal medicines have received much attention as a source of new antibacterial drugs since they are considered as time-tested and comparatively safe both for human use and the environment 5-7.

Habenaria plantaginea Lindl. belongs to family Orchidaceae. A terrestrial Orchid. This is an endemic plant of south India. It is very common and available only from dense matter on rocks. This is native of India occurs in the forest of eastern peninsular flora from Periyakombai Hill above 450 – 650m. An ovoid – globose tuber giving rise to an erect, glabrous, bracteates stem carrying 3 to 7, sub basal, clustered, elliptic- oblong to oblong-lanceolate, sub acute to acute, subsessile, basally clasping leaves that blooms in the late summer and early fill on an erect, laxly 5 to 9 flowered, glabrous, 2 to 7 cm long inflorescence with lanceolate, acuminate, largest towards the base, setaceous margined floral bracts carrying faintly fragrant flowers.

The indigenous people especially in hilly regions take immense pride in treasuring this plant because of its high utility in traditional healing and cure floriculture trade. Habenaria plantaginea tubers used as folk medicine to treat cough, asthma, helminthiasis, insanity and snake bite 8.  The plant has been used as medicine for the treatment of tuberculosis and paralysis 9.

The whole plant of Habenaria plantagniea was collected from the Periyakombai Hill, Namakkal district, Tamil Nadu. The specimen was identified with the help of regional floras and the voucher specimen was deposited at St. Joseph’s college (Autonomous), Tiruchirappalli, Tamil Nadu, India.

100 grams of dried powder were extracted in distilled water for 6 hrs at slow heat. Every 2 hrs it was filtered through 8hrs layers of muslin cloth and centrifuged at 5000 g for 15 min. The supernatant was collected. This procedure was repeated twice and after 6 hrs the supernatant was concentrated to make the final volume one-fifth of the original volume.

100 grams of dried leaves were extracted with 200 ml of two different solvents such as ethanol and chloroform kept on a rotary shaker for 24 h. Thereafter, it was filtered and centrifuged at 5000 g for 15 min. The supernatant was collected and the solvent was evaporated to make the final volume one-fifth of the original volume.  It was stored at 4oC in airtight bottles for further studies.

Percent extractive values were calculated by the following formula.

In vitro antimicrobial activity was examined for various extracts such as water, ethanol and chloroform of the species, Habenaria plantaginea against eight bacterial species which include the gram positive strains viz., Staphylococcus aureus (MTCC 3160), Bacillus subtilis (MTCC 441), and Streptococcus pyogenes (MTCC 442) and gram negative strains viz., Escherichia coli (MTCC 443), Pseudomonas aeruginosa (MTCC 424), and Klebsiella pneumoniae (MTCC 3384), All the bacterial strains were maintained at 4°C on nutrient agar slants until further use.

The plant extracts were tested for their effect against the growth of pathogenic bacteria by disc diffusion method. The various solvent extract of Habenaria plantaginea at different concentrations was employed for antimicrobial activity. The antibiotic discs, Streptomycin (30μg) served as positive control for bacteria. The bacteria tested were inoculated into nutrient agar. After the incubation period of 24 hours at a temperature of 35°C, three or four colonies isolated from these media were inoculated on 4ml of nutrient broth and incubated for 2 hrs at 35°C.

The cultures were adjusted with sterile saline solution to obtain turbidity. Petri dishes containing Muller-Hinton agar medium were streaked separately with these microbial suspensions of bacteria and fungi. Sterile filter paper discs impregnated with 25, 50, 75 and 100mg/ml extracts and control discs were applied over the culture plates. After equilibrium at 4°C, the plates were incubated overnight at 37°C and the diameter of any resulting zones of inhibition was measured. Triplicates were maintained for all these experiments. Based on the diameter of the zone of inhibition, antibacterial susceptibility was ranked10. Inhibition zones were measured and compared with the standard reference antibiotics. Activity index for each extracts was calculated.

Inhibition zone of the standard

Minimum Inhibitory Concentration (MIC) was determined by Micro dilution method using serially diluted plant extracts. The extracts were diluted into different concentrations of 0.125 - 8mg/ml respectively with DMSO. Then each tubes was filled with 1ml of sterile nutrient broth and inoculated with 0.1ml of broth culture of the test organism (inoculums contains 1-2×10-7 CFU/ml). The tubes were incubated aerobically at 37ºC for 18-24hrs. The control tubes were maintained for each test tube. Inhibition of growth observed in those test tubes (No turbidity) which has lowest or minimum concentration of extract. This lowest or minimum concentration was considered as Minimum Inhibitory Concentration (MIC) 11

Total activity is the volume at which the test extract can be diluted with the ability to kill microorganisms. It is calculated by dividing the amount of extract from 1gm plant material by the MIC of the same extract or compound isolated and is expressed in ml/g 12

The tests were performed to find out the presence of active chemical constituents such as alkaloids, terpenes, flavones, flavonoids, steroids, reducing sugars, carbohydrates, tannins, anthraquinones, glycosides, cardiac glycosides by the following procedure. Phytochemical analysis was carried out for all the extracts using standard methods 13, 14

Mean value and Standard deviation were calculated for each test bacteria. Data were analysed by one – way ANOVA and p values were considered significant at p > 0.005 15

RESULTS AND DISCUSSION: The Whole plant powder of Habenaria plantaginea Lindl. was subjected to successive solvent extraction. Percentage yield of the selected successive extract were recorded in Table 1 and Figure 1. 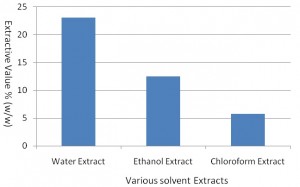 The results of the Minimum Inhibitory concentrations (MICs) of extracts from different solvents such as water, ethanol and chloroform of Habenaria plantaginea determined against 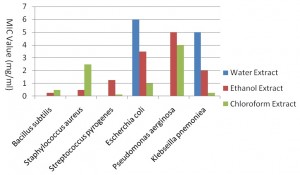 Total activity indicates the volume at which extracts can be diluted with still having ability to kill microorganism (Table 4 and Figure 3). Mostly ethanolic extracts showed high value of total activity (49.96 & 24.98) against Bacillus subtilis and Staphylococcus aureus respectively, which proves the potential of extracts to inhibit growth of the test microorganisms, even at low concentration. Total activity values were calculated in ethanolic solvent extracts (6.245) followed by water extract (45.96) & chloroform extract (22.792) against Klebseilla pneumoniae.

The findings revealed that ethanolic extracts from Habenaria plantaginea contain phytochemicals wtich offer an enormous potential as bio control of these pathogens and source of antimicrobial agents of therapeutic importance. All the test phytochemicals as alkaloids, flavanoids, tannins and Phenolic compounds, Phytosterols, saponins, and glycosides were detected in different solvent extracts, but carbohydrates, Proteins and amino acids were absent in all three solvent extracts (Table 5). Many compounds belonging to these secondary metabolite groups have been reported to their antimicrobial activity. The results showed that the antibacterial activity of the plant were comparable with the results of previous researches using extracts of other orchid species of the genus Bulbophyllum kaitense 16 and Cymbidium aloifolium 17

CONCLUSION: The development of resistance in common human pathogens and emergence of new infectious pathogens intrinsically resistant to the currently available antibiotics demonstrates the urgent importance of identifying novel natural antimicrobial agents. There will be an increasing need for microbial inhibiting substances from plants. The traditional medicinal plants represent a reservoir of antimicrobial agent. Present study shows, Habenaria plantaginea extract shows the most potent antimicrobial activity against five standard species microorganisms. Therefore, Habenaria plantaginea extract and its compounds might be potentially valuable as a natural food preservative.