ABSTRACT: Lup-20(29)-en-3-ol, known as Lupeol is one of the most extensively studied triterpene compounds for their diverse biological properties. Natural triterpenoids gain pre-eminence in cancer research owing to their effects in regulating transcription factors and pathways associated with cell proliferation. The objective of the present study was to evaluate the anticancer activity of Lupeol on human adenocarcinomic human cell lines A549, and expression of anti-apoptotic genes. A549 cell line used in the present study as an in-vitro model of non-small cell lung cancer provides an insight into the apoptotic and anti-metastatic potential of Lupeol. Antiproliferative effects and apoptotic potential was measured using 3-(4, 5-dimethyl thiazolyl-2)-2, 5-diphenyltetrazolium bromide (MTT) assay and Acridine orange/Ethidium bromide staining method respectively. Invasion assay was used to mimic an experimental system to determine metastatic activity and effect of Lupeol on apoptosis-related genes was validated with RT-PCR. The results revealed that Lupeol decreased the cell viability in a dose-dependent manner with an LD50 value of 62.53 mg.mL-1. Presence of apoptotic bodies with membrane blebbing suggests the apoptotic potential of Lupeol after treatment with Acridine orange and Ethidium bromide. Addition of Lupeol decreased cell migration authenticating anti-metastatic potential of Lupeol. mRNA expression analysis shows Lupeol treated cells down-regulated expression of anti-apoptotic genes like BcL-2 and Bcl-xL confirming the apoptotic potential of Lupeol. Based on the results, our study concludes the anti-neoplastic effects of Lupeol against non-small cell lung cancer and induction of apoptosis by Lupeol administration can render its application as a potent chemotherapeutic agent.

INTRODUCTION: Cancer is an aberrant cell growth instigated by multiple perdurable alterations in our genetic blueprint 1 leading to a disorganized harmony of basal cell proliferation and differentiation mechanics 2 ultimately evolving into a premature colony of cells that can infringe surrounding tissues and metastasize to deep sites through circulatory and lymphatic systems 3.

It is a disease having solid evolutionary correlation 4 and is linked with both environmental 5 and hereditary factors 6. The most ubiquitous forms of malignancy comprise of breast, prostate, lung and colon/rectum cancers 7, 8. The most pernicious tumor is Lung cancer, amenable to nearly 30% of entire cancer deaths and 12.9% of current cancer diagnosis 9.

Apoptosis, a genetically orchestrated intrinsic cell-suicide mechanism that acts a central role in diverse biological events such as embryonic advancement and morphogenesis, cell homeostasis, and the expulsion of harmful cells 17. Inactivation of apoptosis is cardinal to malignant transformation of affected cells and leads to tumor metastasis and resistance to available anti-neoplastic drugs 18. The B Cell Lymphoma -2(BcL-2) family genes are evolutionarily conserved key regulators of apoptosis encompasses Pro-apoptotic proteins like Bax, Bak, Bok/MTD and anti-apoptotic members like Bcl-2, Bcl-xL, Bcl-w, Mcl-1 (myeloid cell leukemia cell differentiation protein-1), and the Bcl-2-related gene A1 19. Aberrant expression of major BcL-2 descendants like Bcl-2 and Bcl-xL were experienced in numerous in-vivo and in-vitro lung cancer models 20. BcL-2 inhibitors such as ABT-737, ABT-263 and AT-101 and BcL-xL inhibitors like BXI-61 and BXI-72 target specifically anti-apoptotic proteins in malignant pulmonary cells, thus opening a new mode of therapy for lung affiliated neoplasms 21, 22.

Lupeol, a pentacyclic triterpene which is found commonly in olive, mango, strawberry, grapes, white cabbage, green pepper, fig etc. 23, 24 Various researchers across the globe suggested that Lupeol posses many beneficial pharmacological activities like anti-oxidant 25, anti-inflammatory, anti-diabetic 26, anti-dyslipidemic 27, anti-cataract, anti-arthritic 28, gastro-protective 29, cardioprotective, hepatoprotective 30, nephroprotective 31, neuroprotective 32, 33, anti-angiogenic 34 and anti-cancer 35, 36 efficiencies. Although diverse chemotherapeutics and biologicals are available to treat, scientific communities are in an urge to discover and develop new bioactive molecules against lung related malignancies due to increased resistance to standard therapy, raised the level of air pollution and up surged consumption of tobacco-related products among world population that is studied as major catalysts. Our current inquiry provides an awareness into the apoptotic and its influence in regulating the expression of Bcl-2 gene family on A549 cell lines.

Also, we aim to explore the anti-metastatic and migrastatic activities of Lupeol. The mechanism underlying anticancer activity of Lupeol and its role in modulating anti-apoptotic and pro-apoptotic genes are least explored which can open new avenues in anti-cancer therapy.

Chemicals and Reagents: All the chemicals and biochemicals handled in our study were of analytical grade and purchased from Sigma India, Eurofins India, Invitrogen USA, and Merck chemicals.

Preparation of Lupeol: 1 mg of Lupeol was weighed accurately, and 1mg/ml-1 solution was prepared.

MTT Cell Viability Assay: 37 200 µL of MTT solution was added to the culture containing A549 cells after washed with 1X PBS. Then it was incubated at 37 ºC for 3 h. After the removal of the MTT solution, it was washed with IX PBS and treated with 300 µL DMSO and incubated at room temperature for 30 min until all cells got lysed, and a homogenous color was obtained. To precipitate cell debris, the solution was then transferred to a centrifuge tube and spun at top speed for 2 min. The absorbance was read at 540 nm using DMSO as blank, and the percentage of viability was calculated as follows:

Determination of Apoptosis by Acridine orange (ao) and Ethidium bromide (EtBr) Double Staining: 38 The apoptotic activity of Lupeol was determined in A549 cell lines treated with 100µg/ml-1 of the sample, and was kept for incubation for 24 h at 37 ºC. Untreated cells were kept as control. After incubation, the cells were washed with cold PBS and stained with a blend of AO (100 µg/ml-1) and EtBr (100 µg/ml-1) at room temperature for 10 min. The stained cells were rinsed with 1X PBS and recognized by a fluorescent microscope (Olympus CKX41 with optika pro5 camera).

Transwell Migration Assay: 39 The cell culture dishes coated with DMEM containing Lupeol treated A549 cells were kept for overnight incubation at 40 ºC for 2 h without shaking. Then the cells were plated onto a 60-mm dish to create a monolayer followed by 6 h incubation at 37 ºC. Matrigel invasion chamber (NUC) was hydrated for at least 2 h in the cell culture incubated with 500 µl serum-free DMEM. After hybridization of matrigel chamber, Lupeol treated A549 Cells were plated in 500 µl DMEM supplemented with 10% FBS on top of the chamber. The invasion assay was carried out for 72 h in the cell culture incubator. The cells were fixed by replacing the culture medium in the bottom and top of the chamber with 20% formaldehyde dissolved in PBS. After fixing for 10min at room temperature, the chamber was rinsed in PBS and stained with 1% crystal violet for 30 min. The cells were then counted using an inverted microscope.

A total reaction volume of 20 µL was incubated in a thermocycler (Eppendorf Mastercycler) programmed to initiate DNA synthesis at 42 °C for 30 min, followed by denaturation at 94 °C for 10 min, denaturation repeated at 94 °C for 1 min annealing at 58 °C for 1 min and extension at 72 °C for 1 min which was repeated for 35 cycles and the final extension at 72 °C for 5 min. After the amplification, the PCR product was separated by agarose gel electrophoresis 40.

Anti-Cancer Activity Assay using MTT Method: Cell viability is measured with MTT which is based on the reduction of yellow MTT to purple formazan crystals by metabolically live cells. The amount of formazan produced is proportional to the number of viable cells. From the results, it can be observed that addition of Lupeol induced a dose reliant decrease in cell viability of AS49 cells. 100 µg of Lupeol reduced the cell viability to 44.78% when compared with untreated control cells. There were concomitant changes in cell morphology displaying apoptotic bodies and membrane blebbing in Lupeol treated cells. Lupeol gave an LD50 value of 62.53 µg/ml-1 when determined by MTT assay Fig. 1 and 2.

Determination of apoptosis by Acridine orange (ao) and Ethidium bromide (eb) double staining: Fluorescent double staining with AO and EtBr is done to distinguish apoptosis cells from live cells. It can be analyzed that treatment with Lupeol on A549 cell appeared as red fluorescence, which is as an indication of compromised nuclear membrane suggesting apoptotic cells Fig. 3.

Transwell Migration Assay: Transwell migration assay was performed to determine the chemotactic activity of Lupeol in human lung cancer cells. From the results it can be inferred that the number of cells which has migrated and effectively grown in the lower chamber was found to be much reduced suggesting the inability of cells after adding Lupeol, thereby showing the loss of metastasis after treatment with Lupeol Fig. 4.

mRNA Expression Analysis of Anti-Apoptotic Gene: RT PCR analysis was performed to check the relative expression of BcL-2 and BcL xL gene in human adenocarcinoma cells, and from the result it can be observed that presence of Lupeol reduced the expression of anti-apoptotic proteins BcL-2 and BcL XL significantly Fig. 5 and 6. 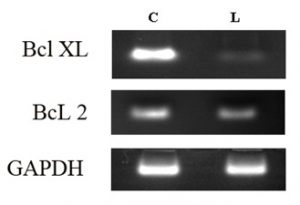 DISCUSSION AND CONCLUSION: Lupeol belong to triterpene family of phytochemicals and Triterpenes are a wide-spread group of natural compounds with a considerable practical significance which is produced by the arrangement of squalene epoxide in a chair-chair - chair-boat arrangement followed by condensation 41, 42. Lung cancer cell lines, A549 was used for the in-vitro studies because the incidence of lung cancer is increasing at an alarming rate and need for new drugs is quite important. The increased use of tobacco along with toxicological factors aids in the step elevation of lung cancer and patients with Non-Small Cell Lung cancer (NSCLC) is at higher risk 43, 44.

MTT assay results show a dose-dependent decrease with cell viability with an increase in the concentration of Lupeol and our studies gave an LC50 value of approximately 62 μg/ml-1. The morphological evaluation of cells conferred changes similar to apoptosis such as membrane blebbing and apoptosis represents a universal and exquisitely efficient cellular suicide pathway. The mechanisms responsible for such death are of obvious importance in determining the efficacy of specific treatments, and we used fluorescent staining for determining the apoptotic activity of Lupeol in human lung cancer cells. The loss of nuclear membrane integrity resulted in uptake of EtBr and resulted in cells stained with red fluorescence and cell shrinkage in lupeol treated A549 cells. The induction of apoptosis 45 was screened by fluorescent microscopy which is considered as a reliable method for assessing the cell death induced by Lupeol. Transwell migration assay was used to measure the anti-invasive effect of Lupeol on A549 cells.

It is already reported that the genetic changes associated with cancer will alter the migration potential of cancer cell enabling to penetrate the basilar membrane and extracellular matrix passing to the blood vessels and then to the target organs 46. Compounds with anti-metastatic properties, in turn are beneficial, and our studies confirmed antimetastatic properties of Lupeol which will be significant in therapeutic prospect.

Experimental therapies targeting Bcl-2-family mRNAs or proteins are currently in clinical testing, raising hopes that a new class of anticancer drugs may soon be available. In this aspect, we determined the effect of Lupeol on the expression of Bcl-2 and Bcl-xL as targets. mRNA expression analysis has shown a significant decrease in expression of Bcl-2 post-treatment with Lupeol suggesting inhibition of Bcl-2 by Lupeol. In response to stress signals, malignant cells may express pro-apoptotic activators. Some cancer cells overexpress BcL-2, which can dampen this pro-apoptotic response. The result is in many cases has an abundance of pro-apoptotic activators bound and sequestered by BcL-2 which leads to increased cell proliferation and the emergence of multiple drug resistance. Hence, it can be concluded that Lupeol can, in turn, induce cell death and apoptosis in lung cancer cells via inhibiting Bcl family of gene and can find applications in the therapeutic regimen.

ACKNOWLEDGEMENT: Authors acknowledge technical staffs and researchers of Biogenix research Center, Thiruvananthapuram, Kerala for all the facilities provided for the work

CONFLICT OF INTEREST: No conflicts to interest to disclose.