ABSTRACT: Walnuts from Northwest region of Syria was collected to determine Omega-6   (linoleic acid (LA, 18:2n-6)) and Omega-3 (α-linolenic acid (ALA, 18:3n-3)) in their oils, also called essential fatty acids (EFAs). This work was carried out using two different portions of samples. First samples were collected at harvest and second samples stored for one year under normal conditions. The extraction of the oil contained in Walnuts was done with hexane by ultrasonic technology, extract contained fatty acid and these fatty acids were estered. Fatty acid methyl esters were analyzed by gas chromatography with flame ionization detection (GC-FID). Syrian Walnuts major fatty acids were 18:2n-2 (linoleic acid) and 18:3n-3 (α -linolenic acid). Regarding n-6/n-3 ratio corresponded to the desired profile; Syrian Walnuts could be of potential interest due to their high nutritive value and lipid content.

INTRODUCTION:Over the last few years, several oils from nuts have been studied. To make sure that they are suitable for commercial use, it is very important to investigate their chemical and physical properties 1.

Nuts may be considered an important component of a healthy diet. In general, they are nutrient-dense foods and provide protein, fat (mostly unsaturated fatty acids), dietary fiber, and many bioactive constituents such as vitamins, minerals, antioxidants, and other phytochemicals. Given such variety of bioactive compounds, extensive research has focused on potential health effects of higher nut consumption on the development of heart disease and prostate cancer 2.

Plants can synthesize Omega- 6 and Omega-3, while human and animals cannot synthesize but they take them from wild plants as alga and plankton 3.

Oil fish is considered an important resource of Omega- 3 where content:

Extensive research has shown that PUFAs are indispensable for the proper functioning of the brain, the eyes, and the entire nervous system. PUFAs are often classified into two families, n-3 and n-6, according to double bond positions. In spite of the important biological functions of n-3 and n-6 groups, humans lack the enzymes required to form double bonds beyond the ∆9 position. To overcome this limitation, the primary PUFAs precursors, linoleic acid (LA, 18:2n-6) and α-linolenic acid (ALA, 18:3n-3), also called essential fatty acids (EFAs), must be obtained from a diet 6.

Since, saturated fatty acids increase the risks of cardiovascular diseases, cancer and autoimmune disorders, oils are of more nutritional value if they have proportionally more unsaturated than saturated fatty acids 4. The determination of fatty acids is a routine method in food chemistry and food control. The lipid phase is extracted with organic solvents, and the fatty acid profile is determined after trans-esterification into fatty acid methyl esters (FAMEs), followed by gas chromatography-flame ionization detector (GC-FID) analysis. GC-FID is the method of choice for the determination of relative contributions of individual fatty acids to the fatty acid pattern due to the relative constant response factors irrespective of the chain length and number of double bonds 7, 8.

Food composition databases that are comprehensive and representative of available foods provide detailed information on nutrients and dietary factors in foods 5. Thus, the aim of this study was to determine Omega-6 and Omega-3 profile of walnuts from the Northwest region of Syria, so as to provide reliable data on the nutritional composition of Syrian native walnuts.

Samples: This work was carried out using walnuts obtained from the Northwest region of Syria, which were harvested from the native trees of this region. All samples were collected from annual harvest (2010). Approximately 0.5 kg of walnuts was collected from harvest. Samples were divided into two portions, sample1 was used for analysis and sample-2 stored for one year with holding external peeling under normal conditions. Table 1 shows the fruits and nuts assayed in this study.

Sample preparation: The pulp of each sample (harvested) was grinded and homogenized in a food processor and divided into portions (5 g each one) for immediate analysis. Each portion was distributed into plastic bags. The air was removed from the plastic bags,

Total lipids extraction: The extraction of the oil contained in walnuts (pulp) was done with hexane by using ultrasonic for 20 minutes. Then, the extract was filtered. This process was repeated three times, so as to avoid the use of organo-chlorinated solvents in the sample treatment. The oil was obtained by hexane evaporation in a rotary evaporator at 60°C under vacuum till 10 ml. The oily fraction resulting from the cold extraction was transferred to a test tube with cap.

Fatty acids determination: About 5 ml of oil sample was weighed in a flask. Next, a methanolic solution of KOH 0.5 mol.L-1 was added, and the mixture was shaken for 5 minutes, to convert free fatty acids into methyl esters. Subsequently, the upper organic phase that contained the fatty acids methyl esters was collected and transferred to a test tube containing Na2SO4. 1ml of the organic phase containing methyl esters was added to 1ml from phenol 1g/100ml (internal standards) and kept in flasks with caps and 1 µl of this solution was injected in the gas chromatograph. The samples were analyzed in duplicate. 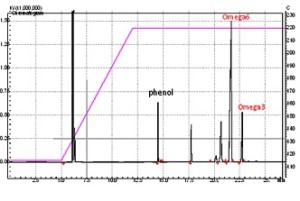 RESULTS: As can be seen in Table 1, Syrian walnut major fatty acids were 18:2 (linoleic acid) and 18:3n-3 (α-linolenic acid). Both linolenic acid and linoleic acid are essential fatty acids since linolenic acid is precursor of eicosapentaenoic acid (EPA) and LA is precursor of arachidonic acid (Which are precursors of prostaglandins, thromboxanes, and leukotrienes in humans as mentioned by Tapiero et al., 2002 9. Also it can be seen in Table 1 the quantitative differences between fresh native walnuts and storage native walnuts.

The results obtained in this study showed the influence ofthe storage on Syrian walnuts content. The content of omega-3 and omega-6 where lowered in half during storage. While the storage did not influence of the ratio of n-6 to n-3, it stayed nearly the same.

DISCUSSION: Syrian walnuts studied in this research are of potential interest due to their high nutritive value and lipid content. In addition, the ratio n-6/n-3 was 4 and this corresponds with nutritive recommendations. It is useful to prepare nutritive forms from walnuts which are suitable to eat in schools and regions which are poor in local walnuts. But walnuts must be eaten fresh or stored in special conditions (packed and stored in cool and dark place). The cultivation of these plants, which has been traditionally carried out by the natives since ancient times, should be encouraged.

ACKNOWLEDGEMENTS: The authors acknowledge the financial support received from the University of Aleppo.