In silico differential genomics helps to identify genes that encode for unique metabolism with relation to human. The genomic database provides a vast amount of useful information for the drug target identification. The subtractive dataset obtained comparatively between the human and the pathogen genome, differentially provides information about the genes that are likely to be essential to the pathogen but is not part of the host (human).This approach has given fruitful results in recent times to identify essential genes in Pseudomonas aeruginosa. The same strategy is used to analyse the whole genome sequence of the Treponema pallidum subsp. pallidum str. Nichols. Three putative membrane-bound drug targets have been derived step-wise, out of the 301 essential genes that have been predicted. The putative drug targets include the drug targets taking part in unique metabolic pathways that are situated in the membrane and are specific to the pathogen. Structure prediction of the membrane bound drug targets is done along with B-cell epitope mapping that highlights the immunogenic part of a protein. Syphilis is characterised by many asymptomatic and latent clinical stages. In spite of effective prophylaxis by use of penicillin, there has been increase in the resistance in the pathogen and an alternative is required due to penicillin allergic pregnant women. In silico study for identification of potential drug targets has been possible due availability of whole proteomic data of Treponema pallidum subsp. Pallidum str. Nichols.

Pathogenicity of the bacteria is mainly due to the presence of the capsule. It consists of the outer and inner membrane that helps in studying the membrane associated proteins 1. This organism is the causative agent of venereal syphilis at the molecular level. The sexual transmitted disease was first discovered in Europe at the end of the fifteenth century, however, the causative agent was not identified until 1905 2. Syphilis was reported to be the third most commonly reported transmittable disease in USA.

Syphilis is characterized by many clinical stages and long periods symptomless and latent infection. Although effective chemotherapies have been available as a result of use of penicillin, syphilis remains a major global health problem.

MATERIALS AND METHODS: The subtractive genomics methodology retains the protein dataset that is indispensable and the proteins that are part of the unique metabolic pathway. The proteins essential for the basic function of Treponema pallidum subsp. pallidum str. Nichols are analysed further for structure prediction and epitope mapping. The flow chart in figure 1 shows algorithm for the present approach 5, 6, 7, 8.

Retrieval of proteome of Host and Pathogen: The complete proteome and the NR datset of the Treponema pallidum subsp. pallidum str. Nichols and human were retrieved from NCBI 9. Essential protein sequences of the pathogen are manually extracted from the database of essential genes (DEG) 10.

Protein function prediction of essential genes: The function of the uncharacterised proteins is predicted using SVMProt web server (http://jing.cz3.nus.edu.sg/ cgi-bin/svmprot.cgi.) 12. The primary sequence of Proteins is used to characterize proteins according to their function by using SVM (Support Vector machine) Prot program.

Sub Cellular Localization Prediction: Finding the cellular position of the subtractive protein-set was accomplished by CELLO (subcellular localization predictor) program 15 to identify the membrane-bound proteins which could be probable drug targets.

Structure prediction of Membrane Drug Targets: The 3-D structure of the membrane bound proteins of the Treponema pallidum subsp. pallidum str. Nichols was predicted by Pyre2 server 16, since its sequence similarity with the know PDB structure was very less.

B-cell epitope mapping: The membrane proteins of the Treponema pallidum subsp. pallidum str. Nichols are the ideal vaccine candidate for the peptide vaccine preparation. The B-cell epitopes of the proteins are predicted using BCPreds (cutoff score >. 7) under default condition and its exposure to the external of the cell is identified by TMHMM. The antigenicity of the protein was determined by the VaxiJen server under default conditions (cutoff score >. 4) 17.

RESULTS AND DISCUSSION: Of the total 1036 genes of Treponema pallidum subsp. pallidum str. Nichols 301 are the essential genes belonging to different protein classes. 3 proteins are membrane-bound having role in unique metabolic pathways. 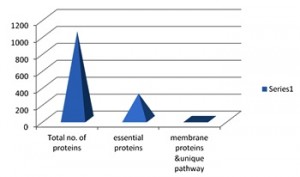 The structural and functional proteins of Treponemapallidum pallidum str. Nichol showing more conserved regions with the human proteome are excluded from further analysis during execution of BLASTp. The resulting non-homologous proteins are analysed by BLASTp using another server DEG (database of essential genes) that predicts the essentiality of the gene. 301 essential genes are predicted from the proteome of the pathogen. The subtractive dataset is indicated in figure 2.

The sub cellular localization prediction of essential protein of T. Pallidum str Nichols are predicted to extract the proteins that are exclusively membrane-associated and also cross checking with the SVM prediction for the localization of the protein. Common results were included. Following this procedure a total of 3 proteins that had a high probability of being located in the membrane are considered.

Functional classification of the 3 putative uncharacterized membrane-bound essential proteins were performed by using the SVMProt web server. The proteins functions based on p value, which is the classification accuracy indicator. All Putative drug targets are predicted to have transmembranal function.

The 3-D structure of the proteins predicted through fold based method was validated by Ramchandran plot 18. The percentage of amino acids of the predicted structure falling in of allowed regions of Ramchandran plot, the structural and functional analysis are summarized in table 1.

TABLE 1: FUNCTIONAL AND STRUCTURAL ANALYSIS OF THE PUTATIVE DRUG TARGETS IN RAMCHANDRAN PLOT

B-cell epitope mapping showe that all membrane proteins are antigenic, especially the cell division protein. A total of 8 B-cell epitopes are predicted out of them only 3 epitope are exposed to the surface.

The virulence factor protein did not show any surface exposed epitopes instead they are transmembranal. Resulting parameters during epitope mapping is summarized in table 2.

CONCLUSION: Huge amount of proteomic and genomic data is available in the public domain due to large scale genomic projects. DEG is an efficient tool for identification of drug targets in the genomic data under study 19. In the current study, several proteins are studied that can be effective drug targets and posses epitopes for drug design & and vaccine design respectively in Treponema pallidum subsp. pallidum str. Nichols. Such drug targets will specifically “kill” the pathogens since drugs dock with proteins in vivo that are part of unique biochemical pathway. The essential genes of the Treponema pallidum subsp. pallidum str. Nichols, identified in the present study can be further studied for immunogenic portions of proteins. Virtual screening also helps in identifying the compound acting against these proteins.

ACKNOWLEDGMENTS: The authors are grateful to DBT-BIF Center, Karnataka State Women University, Bijapur for providing a platform for the research work.

Competing Interests: The authors declare that they have no competing interests.