ABSTRACT: The present paper deals with the analysis of methane sulfonic acid, benzene sulfonic acid and camphor sulfonic acid counter anions in pharmaceutical ingredients (doxazosin mesylate, amlodipine besylate and clopidogrel camphor sulfonate) by suppressed conductivity anion chromatography. The diluent used for the preparation of sample solution was Milli-Q Water and injected into a standard chromatographic system connected with 250 mm length, 4.0 mm ID, 5.0 µm particle size, Metrosep A Supp1 column and suppressed conductivity detector.  The developed analytical method was highly precise and accurate compared to titration methods and HPLC-UV detection methods to analyze counter ions in drug substance. Calibration curves were linear with correlation coefficient of > 0.999 for anions. The % RSD of area response of anions in standard injections was below 2.0, which demonstrates the method precision of the test procedure. The accuracy of the method was also studied and observed between 97% and 102%. The developed method was validated according to ICH guidelines for the quantitative determination of anions in API taken for the study.

INTRODUCTION:  Salt formation with pharmaceutically acceptable counter-ions is an extremely useful approach for the optimization or modification of the physicochemical, processing (including formulation), biopharmaceutical (including safety and tolerability) or therapeutic properties of ionizable drug substances. Each of the individual salts of a particular drug substance can be considered as a unique chemical entity with its own distinctive physicochemical and biopharmaceutical properties

Classical titration methods are not much accurate compared to instrumental techniques and are subjective for end point observations. So it has become necessary to quantify the counter ions with more accuracy and more precision then existing analytical methods. Use of ion chromatography enables the quantification with more accuracy, precision and specific to counter ions 1, 4. This is important to determine the concentration of the counter ion in the drug substance, because the determination of counter ion is essential to establish the stoichiometry, the correct molecular mass of the drug, and the completeness of salt formation and counterion determination is also important in drug authenticity studies. 2, 3

It has been estimated that approximately half of all of the active pharmaceutical substances (API) that have been developed were ultimately processed as pharmaceutically acceptable salts. 5, 6, 7

Ion chromatography (IC) is based on a stoichiometric chemical reaction between ions in a solution and a normally solid substance carrying functional groups which can fix ions as a result of electrostatic forces in anion chromatography quaternary ammonium groups. In theory ions with the same charge can be exchanged completely reversibly between the two phases. The process of ion exchange leads to a condition of equilibrium. 9, 10, 11

In this present study sulfonic acid counter ions are analyzed by anion ion chromatography, the developed method was simple, rapid, and accurate for analysis of counter ions from API’s salts of doxazosin, amlodipine and clopidogrel.

FIG.1. APIS USED IN THIS STUDY

The chromatographic column used was a Metrosep A Supp1 column (250 x 4.0 mm, 5.0 µm particle size) having a stationary phase of polystyrene-divinyl benzene with quaternary ammonium groups, that was safeguarded with Metrosep A Supp 4/5 guard column. The mobile phase used was a mixture of 8.0 mM sodium carbonate and 1.0 mM sodium hydrogen carbonate prepared in HPLC grade water, and then it is mixed with acetonitrile in the ratio of (80:20). The flow rate of the mobile phase was set at 0.7 mL/min. The injection volume was 20 µL. The diluent used was milli Q water: acetonitrile (80:20).

The anion exchange chromatographic system is equipped by a cation exchange resin suppressor for chemical suppression. Chemical suppression reduces the background conductivity and replaces the counterions in the sample i.e. all cation from the mobile phase were replaced by H+. By this suppression reaction, an eluent with high conductivity is transferred to water and carbon di-oxide which has low conductivity. The suppressor is regenerated after each run using a suppressor regenerator followed with suppressor rinsing with milli Q water. The suppressor regenerator used is 50 mM sulphuric acid prepared in milli Q water. The detector interface was set with a detector range 100 µS/cm and a detector full scale of 20µS/cm. The run time for each run was 15 min.

The standard solutions were prepared by dissolving the doxazosin mesylate, amlodipine besylate and clopidogrel camphor sulfonate at a 40µg/mL concentration.

The objective of this work was to quantitatively determine counter ion present in the active pharmaceutical ingredient. During method optimization, all chromatographic parameters were found to prove specificity, precision, linearity, accuracy of doxazosin mesylate, amlodipine besylate & clopidogrel camphor sulfonate anions. All calculations concerning the quantitative analysis were performed with external standardization by measurement of the peak areas.

Specificity is the ability to unequivocally assess the analyte in the presence of its potential impurities, which may be expected to be present like impurities, degradants, matrix, etc. The specificity of the developed ion-exchange chromatographic method was established in the presence of 11 anions and three active pharmaceutical ingredients (API), namely acetate, mesylate, chloride, camphor sulfonate, trifluoroacetic acid, bromide, besylate,  p-toluene sulfonate, phosphite, phosphate, trifluromethane sulfonic acid and the APIs doxazosin, amlodipine & clopidogrel anions.

Drugs were not subjected to forced degradation, as the impurities generated were organic moieties, which do not have any response in the ion-exchange chromatographic method.

The precision of an analytical procedure expresses the closeness of agreement between a series of measurements from multiple samplings of the homogenous sample under the prescribed conditions.

The precision for doxazosin mesylate, amlodipine besylate & clopidogrel camphor sulfonate were checked at the 100 μg/mL, 134 μg/mL and 100 μg/mL respectively, corresponding to the theoretical content anions, i.e. 17.5%, 28.0% and 41.3% of methane sulfonic acid, benzene sulfonic acid and camphor sulfonic acid in doxazosin mesylate, amlodipine besylate and clopidogrel camphor sulfonate, respectively. Method precision was performed on six different preparations of the test samples. The percentage relative standard deviation of the content of all four anions in the six preparations was calculated.

The intermediate precision of the method was also evaluated by a different analyst, different instrument, and on a different day.

The linearity of an analytical test procedure is its ability to obtain test results within the given range which is directly proportional to concentration of the analyte in the sample. The linearity of the method was checkesd at seven concentration levels from 25µg/mL to 200µg/mL of mesylate, besylate and camphorsulfonate. The calibration curve was drawn by plotting the peak areas of all three acids against corresponding concentrations. The correlation coefficients of the regression lines of the calibration curves were also calculated.

The accuracy of an analytical procedure expresses the closeness of agreement between the value which is accepted either as a conventional true value or an accepted reference value, and the expected value found. Standard addition and recovery experiments were conducted to determine accuracy of the quantitation of methane sulfonic acid, benzenesulfonic acid and camphor sulfonic acid is doxazosin mesylate, amlodipine besylate and clopidogrel camphor sulfonate samples. The study was carried out by weighing drug substances to attain 50%, 100% and 150%. Theoretical concentrations of anions in their respective drug substances were injected in triplicate at each level. The % recoveries of all three acids were calculated from the slope and y-intercept of the calibration curve obtained.

The solution stability was carried out by keeping both test solutions and reference solutions in tightly capped volumetric flasks at room temperature for 72 h, The sample solutions were analysed at initial, 24 h, 48 h and 72 h.The stability of the mobile phase was also carried out for 72 h by analyzing the freshly prepared reference solutions at initial, 24 h, 48 h and 72 h. The mobile phase was kept constant during the study.

There was excellent selectivity and specificity observed for the 11 anions. All four of the selected sulfonic counter ions are well-resolved from each other and there was no interference either from the blank, other anions, or from their respective drug substances. The freebases of the drug substances, namely the doxazosin base, amlodipine base and clopidogrel base being non-ionic, did not have any response in ion chromatography conductivity detection. The retention time details of the 11 anions are tabulated in Table1 and chromatograms are shown in Fig. 3. 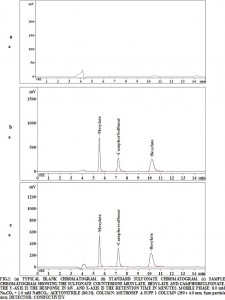 TABLE 1: INORGANIC AND ORGANIC ANIONS AND THEIR RETENTION TIMES

The method precision of the analytical method for sulfonate three ions was checked at the specification level in their respective drug substances in six determinations of the test solution. The method precision experiments exhibited excellent results (% RSD) with very low % RSD.

The intermediate precision was also performed by a different analyst using a different instrument on different days. The results showed that the % RSD was less than 5.0%.

The linearity of the method for all three sulfonate ions checked at seven concentration levels from 25 µg/mL to 200 µg/mL they exhibited results within the acceptance criteria. The linearity results are computed in Table3.

The accuracy of the method for all three sulfonate ions was checked by recovery experiments in the range of 50% to 150% of the specification level fo each sulfonate ions. Results were found to be close to true value.

TABLE 4: EVALUATION OF ACCURACY RESULTS (IN %).

In all of the deliberately varied chromatographic conditions (flow rate, composition of acetonitrile, sodium carbonate and sodium bicarbonate concentration), all analytes were adequately resolved and the elution order remained unchanged. The % relative standard deviation of the standard was less than 3.1; the % variation in the content was less than 0.33.

The resolution between mesylate, camphorsulfonate and besylate was greater than 1.5. A very minor variation in the % RSD and % variation in the content was observed in all the robustness conditions. The results are shown in Table 5.

TABLE 5: RESULTS OF THE ROBUSTNESS PARAMETER

Stability of Solution and Mobile Phase:

CONCLUSION: The simple new rapid ion chromatographic method developed for the quantitative determination of sulfonate salts i.e mesylate, besylate and camphor sulfonate ions in presence of active pharmaceutical ingredients (doxazosin mesylate, amlodipine besylate & clopidogrel camphor sulfonate) with appropriate precise, accurate, linear and robust. The method was validated showing satisfactory data for all the method validation parameters tested. The developed method can be extended for the quantitative determination of these three anions in other APIs also by testing minimum parameter like specificity and accuracy. Future work will be quantification of potential genotoxic impurities by ion chromatography conductivity detector. Communication number IPDO IPM – 00465 has been allotted for this research article in the research laboratory.

The authors declare no conflict of interest.