ABSTRACT: Swarna has been used all through these ages in various forms such as raw gold, pure metal, gold foils, red colloidal solution, Swarna Patra, Swarna Parpati and bhasma and other forms in varying dose and stands time tested. The procedure in which Swarna along with herbs are taken in the form of liquid, semi-solid or paste form by children orally is referred as Swarnaprashana. Swarnamritaprashana is formulated by modifying Swarnaprashana with scientific inputs and references from Ayurvedic classical literatures. Guduchi (Tinospora cordifolia (Thunb.) Miers), Brahmi (Bacopa monnieri(L.) “Vacha” Pennell), (Acorus calamus L.), Jatamamsi (Nardostachys jatamansi (D. Don) DC.), Ashwagandha (Withania somnifera (L.) Dunal), Shankhapuspi (Convolvulous pluricaulis Choisy), Yastimadhu (Glycyrrhiza glabraL.), Pippali (Piper longum L.) and Maricha (Piper nigrum L.) are the constituents of Swarnamritaprashana. Since 2009 May, Swarnamritaprashana has been administered once in a month at 12 centers at the Sri Dharmasthala Manjunatheshwara College of Ayurveda and Hospital, Hassan, Karnataka, India as a public health initiative. The current paper details how Swarnaprashana has got transformed into the current form of Swarnamritaprashana by way of modification happened through ages.

INTRODUCTION: Gold has always been widely used in medicinal preparation since ancient times as it is considered to be therapeutically effective.1 The use of gold in single or along with various herbal components for ailments can be traced throughout ancient Ayurveda literature.2 The health care system prevailed in ancient world have hence suitably and efficiently used Swarna after properly understanding the potential of the same.

Since then, Swarna has been used to advance long life and battle the aging process.3 Moreover it had helped in enhancing strength and vigour in children. Swarna has been used although these ages in various forms such as raw gold, pure metal, gold foils, red colloidal solution, Swarna Patra, Swarna Parpati and bhasma and other forms in varying dose and stands time tested.4

Swarnaprashana: The procedure in which Swarna along with herbs are taken in the form of liquid, semi-solid or paste form by children orally is referred as Swarnaprashana.10 Swarna Bhasma is used as a chief ingredient in Swarnaprashana for neonates and children.11 The practice of Swarna Prashana is conventionally followed as a cultural practice in India. Swarnaprashana is a unique practice mentioned under Jatakarma Samskara in Ayurveda classics.12 Amongst all Acharyas who have very well explained regarding Swarnaprashana, the contribution of Acharya Kashyapa is unique where administration of processed gold in children is mentioned even thousands of years back. Acharya Kashyapa has given clear cut idea about Prashana, its procedure, indications, contra indications, ingredients and formulations.13 Swarnaprashana is prepared by triturating Swarna along with honey, ghee and water on a pre-washed and clean stone facing eastern direction and made the infant lick the same.13

He has explained evidently the administration of Swarna (gold) in children for Medhavardhana (improving intellect), Agnivardhana (promoting digestion and metabolism), Balavardhana (promoting immunity and physical strength), Ayushyam (Promoting longevity), Mangalam (auspicious), Punyam (Virtuous), Varnya (improves complexion), Vrishya (fertility), Grahapaham (protection against infectious organisms).10 Maasathparamamedhavi (if fed for one month, child will be extremely intelligent), Vyadhibhirna cha drishyate (will not be attacked by any disease) and Shadbhirmasesruthadhara (if fed for 6 months, child will be able to retain whatever he hears) are the classically detailed benefits of Swarnaprashana.14 As per Acharya Sushruta, Swarna has to be administered along with Madhu (honey) and Ghrita (ghee) in one among the procedures of Jathakarma samskara.15 Acharya Sushruta has advised its use after garbhambu vamana, but before abhyanga and snana. He also added that, Swarnaprashana helps in development of a child both physically and mentally, promotes Bala and budhi (memory).16

Acharya Vagbhata has also explained Swarnaprashana under Jatakarma Samskara, wherein a baby should be made to lick the mixture of madhu and ghrita mixed with Anantha (Swarna) fortified with sacred mantras three times a day inorder to attain medha (intellect), ayu (long life) and bala (good strength).17 Acharya also mentioned Hemaadiprashana wherein swarna is mentioned with synonyms-Hema, Kanchana & Kanaka, along with herbal drugs mixed with madhu and ghritha, when consumed for a period of one year bestows good Vapu (body growth), Medha (intelligence), Bala (strength), Varna (colour) and Subha (goodness).18

Swarna Bhasma (1.2 gram) and honey (50 ml) are added to this ghrita and triturated on the day of Pushya Nakshatra. The bowl of Swarnamritaprashana is kept in warm water to maintain the consistency. This preparation is administered orally in a dose of 4 drops (containing 2 mg of Swarna Bhasma) to each child.

Swarnamritaprashana as a Health Initiative:  Since 2009 May, Swarnamritaprashana has been administered once in a month at 12 centers for children between 0-16 years. On the day of Pushya Nakshatra, children accompanied by their parents will report at the registration counter. A card is handed over with registration number containing details about name, date of birth, age and address alongwith parent’s name and other details. Afterwards they will be reported to the examination hall at different counters to determine the anthropometric measurements like Weight (kg), height (cm), head circumference (cm) and chest circumference (cm) and the same will be entered into the card. Any illness and its duration are also documented. On completion, they will be reported to the card collection counter and carries a slip to Swarnamritaprashana drop counter. All the parents are advised not to give any food to child for one hour after administration of Swarnamritaprashana. The same procedure is followed in all the 12 identified centers of Swarnamritaprashana. The study on Swarnamritaprashana was started on 29th May 2009 at the Sri Dharmasthala Manjunatheshwara College of Ayurveda and Hospital, Hassan with 334 children. A maximum of 104 cycles of Swarnamritaprashana has been conducted till 10th February 2017 and is detailed in Graph 1. 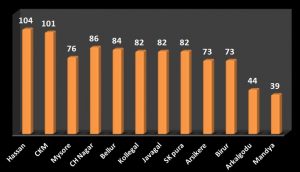 Overall 6,76,106 doses of Swarnamritaprashana has been administered as part of this public health initiative till date. The year wise distribution of doses is detailed in Graph 2. 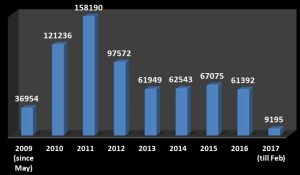 DISCUSSION: Swarnamritaprashana is a herbo-mineral preparation with extracts of herbs in Ghrita media possessing Balya, Rasayana, Medhya and Tridoshahara properties. Swarna Bhasma, the principal ingredient of Swarnamritaprashana enhances immunity through phagocytosis.28 Swarna Bhasma have been incorporated both in Ayurveda and medical science for rejuvenation and immunomodulation in many chronic diseases.29 Conventional gold preparations are credited with rejuvenating and antioxidant properties.30 Brahmi, Shankhapushpi and Vacha are effective in improvement of memory and lack of attention.31 Vacha used here possess immunomodulatory activity.32 Yastimadhu also exhibits immunomodulatory property and enhances permeability in drug delivery system.33 Guduchi is anti-inflammatory and at the same time immunostimulant too.34 Pippali possess shows rejuvenating effect on lungs and increases the bioavailability.35-36 The alkaloid piperine contained in Maricha aids in digestive process by enhancing the ability of body to absorb the essential nutrients.

CONCLUSION: Swarnamritaprashana can be securely administered in infants and children up to 16 years of age for their physical, mental and intellectual wellbeing. Comprehensive controlled clinical trial needs to be taken up with biomarkers to support the immunomodulatory activity of Swarnamritaprashana. Such clinical trials with immunological profile determination can open way for wide use in National Health Program for the benefit of the children. Ultimately, Ayurveda can improve the quality of life through health promotional strategies by developing integrated and multi-sectorial approach for population-based prevention interventions.