ABSTRACT: Antioxidants prevent the damage done to the cells by free radicals that are released during the normal metabolic process of oxidation. Some of these free radicals include reactive oxygen species, hydroxyl, the superoxide anion, hydrogen peroxide and peroxyl which generate metabolic products that attack lipids in the cell membranes or DNA. These are associated with DNA damage, carcinogenesis and cellular degeneration related to aging and also contributes to heart diseases and arthritis. Researchers around the world have identified many natural constituents with antioxidant activity. Thus in the present work we have studied the synergistic antioxidant activity of lipoic, ferulic and ellagic acid which is naturally occurring compounds having medicinal properties by 1, 1-diphenyl-2-picrylhydrazyl assay. Highest antioxidant activity is reported for mixture of all the three compounds with 98% & 64% inhibition in both methanoilc and aqueous solutions followed by ferulic acid with 97% & 70% inhibition and mixture of ellagic and lipoic acid with 96% & 59% inhibition in both methanoilc and aqueous solutions. Thus from the results it is clear that the appropriate combinations of all the compounds showed best antioxidant activity. The high antioxidant activity can be attributed due to synergistic effect.

INTRODUCTION: During normal process, free radicals are produced which are unstable and desperately want to become stable. They do this by stealing electrons from healthy cells, making them unstable. Damage caused by these free radicals to the healthy cells is considered to be cause of certain serious problems such as ageing, cardiovascular diseases, rheumatoid arthritis, Alzheimer’s, Parkinson’s and vision problems 1.

Dietary antioxidants are believed to be the effective nutrients in the prevention of above oxidative stress related diseases. Antioxidants although can’t completely stop aging but proper amount of antioxidants can slow the process considerably. In recent years, there has been a growing interest in antioxidants 2. In food industry generally synthetic antioxidants like BHA (Butylated hydroxyl anisole) and BHT (Butylated hydroxyl toluene) are used to check the lipid peroxidation and oxidation of food but some side effects have been reported 3.

Therefore people are more interested in safer and natural antioxidants which are found in many plants, fruits, vegetables and spices 4, 5, 6, 7. As a result, natural products become again the burning topic of research which has been used for centuries for the treatment of various diseases. Thus we consider that it is worthwhile to study the synergistic antioxidant potential of lipoic, ferulic and ellagic acid which are natural products having lots of medicinal properties.

Lipoic acid is a multifunctional nutraceutical. Chemically it is 1, 2-dithiolane-3-pentanoic acid. It is a naturally occurring compound present in most kinds of prokaryotic and eukaryotic cells. It is also present in meat, liver and heart. 30 mg of lipoic acid was purified from 100 Kg of liver residue by Reed et al 8. In humans lipoic acid is a part of several 2-oxo acid dehydrogenases which are involved in energy formation. Linked to lysine residues of the 2-oxo acid dehydrogenases multienzyme complexes, lipoic acid acts as a cofactor 9.

In order to be considered a powerful antioxidant, a compound must meet several criteria. In addition to displaying antioxidant features such as radical quenching, metal chelation, interaction with antioxidant, amphiphilic character, metabolic regeneration and gene regulation, and the substance need to be bioavailable and safe. It is noteworthy to mention that lipoic acid meets all the above criteria and it renders lipoic acid as an ideal antioxidant 12.

Ferulic acid is a phenolic acid and has a great potential to scavenge free radicals. Chemically it is 3-(4-hydroxy-3-meyhoxyphenyl)-prop-2-enoic acid. It can exist as monomer, dimer, free oligomer or polymer. High concentration of ferulic acid is found in corn, wheat, maize bran, banana, bamboo shoots, eggplant, orange, beets as well as in broccoli, spinach, cabbage, potatoes, carrots, tomatoes, coffee, natural extracts of herbs and a range of fruits and vegetables 13. Fairly high concentration of ferulic acid has been isolated from lignocellulytic agricultural waste (rice bran, wheat bran and corncop) with the help of the enzymes such as extracellular esterase (AXE) and xylanase obtained from thermobifida fusca NTU 22 14. Besides its antioxidant potential, it also acts as antimicrobial, anti-inflammatory, hepatoprotive 15 antidiabetic 16, anticholesterolemic 17 and anticarcinogenic agent 18.

Ellagic acid is chemically-2, 3, 7, 8-tetrahydroxy-chromeno [5, 4, 3-cde] chromene-5, 10-dione. It is highly thermostable and its melting point is 350˚C 19.  Ellagic acid is naturally occurring polyphenol. It is found in majority of fruits and nuts like strawberries, raspberries, pomegranates, pecans, walnuts etc 20. Ellagic acid acts as prominent antioxidant 21, anti-mutagenic 22, anti-cancerous 23, antiviral and antibacterial 24. It shows chemoprotective effects against cancer cells of the breast, oesophagus, skin, pancreases, and colon 25. Studies have shown that ellagic acid enhances the hepatic phase II enzyme activities which on the other hand promotes the ability of target tissues to detoxify the reactive intermediates which are responsible for the growth of cancer 26.

The hydrogen atom or electron donating ability of the compounds and standard - BHT was determined from bleaching of purple colored methanol solution of DPPH*. This spectrophotometric assay uses the stable radical DPPH* as a reagent. The diluted working solutions of lipoic, ellagic and ferulic acids were prepared in methanol and water (1.0, 0.5, 0.25, 0.125 and 0.062 mg/ml).

Different concentrations of compounds were taken in each test tube and volume was made up to 2ml. Then 2ml of DPPH* solution was added in each test tube and these solutions were kept in dark for thirty minutes. DPPH* was prepared at a concentration of 0.002%. The same procedure was followed for BHT as well. All the samples were tested in triplicate. Later optical density was recorded at 517nm using UV- visible spectrophotometer. Methanol with DPPH* was used as a control. The method was same as used by Kahalaf et al., with slight modifications 27. The formula used for the calculation is

Where A= optical density of control;

B = optical density of sample.

Antioxidant activity of methanolic and aqueous extracts of all the three compounds and their various mixtures were evaluated by DPPH* assay (Table 1).

TABLE 1: ANTIOXIDANT ACTIVITY OF METHANOLIC AND AQUEOUS SOLUTIONS OF FERULIC, ELLAGIC AND LIPOIC ACID ALONG WITH THEIR VARIOUS MIXTURES 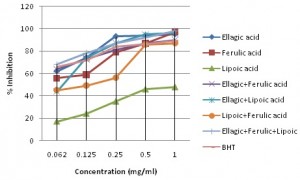 FIG.1: ANTIOXIDANT POTENTIAL OF METHANOLIC SOLUTIONS AND THEIR COMBINATIONS 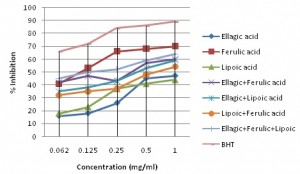 FIG.2: ANTIOXIDANT POTENTIAL OF AQUEOUS SOLUTIONS AND THEIR COMBINATIONS

DISCUSSION: Lipoic acid is a thiol antioxidant and it plays a very predominant role in the redox dependent regulation of numerous cellular targets. Lipoic acid not only prevents the oxidative damage but it also involved in redox regulation of signal transduction and gene expression 28, 29. It reduces oxidative stress level and is helpful in treatment of diseases where ROS overproduction is increased 30. Lipoic acid and its reduced form dihydrocholoric acid (DHLA) meet all the criteria for an ideal antioxidant because they can easily quench radicals, can chelate metals have an amphiphilic character and they do not exhibit any serious side effects. They interact with other antioxidants and can regenerate them.

That is why lipoic acid is called as antioxidants of antioxidants 31. Free radical generation with subsequent oxidative stress constitutes the mechanism of production and progression of renal diseases. Recently alpha lipoic acid has been reported to protect the renal tissue from ischemia-reperfusion injury 32.

It has four rings because of which it is lipophilic in nature. On the other hand four phenolic groups and two lactones are responsible for its hydrophilic character. Phenolic groups form hydrogen bonds and also act as electron acceptor. It has been observed that polyphenols reacts with free radicals through three possible mechanism hydrogen atom transfer (HAT), single electron transfer-proton transfer (SET-PT) and sequential proton loss electron transfer (SPLET). From thermodynamic point of view, it was found that hydrogen atom transfer (HAT) is the most important free radical scavenging mechanism for ellagic acid 35.

When ferulic acid comes in contact of other free radical the hydrogen atom of phenolic group is easily transferred to the other radical and a phenoxy radical is formed which is stabilized by the resonance. This stable phenoxy radical is unable to initiate or propagate a radical chain reaction. It may collide to another radical, condenses and forms a dimer curcumin and other dimers. In this way it scavenges free radicals 13, 36, 37.

ACKNOWLEDGEMENT: The authors Archana Pandey is thankful to UGC, New Delhi (F.NO. 38-38 2009/SR); Mridula Tripathi and Priyanka Chawla are thankful to BRNS, Mumbai for financial assistance and all the authors are very grateful to Department of Chemistry, CMP Degree College, Allahabad for providing essential facilities.