INTRODUCTION: As per an examination performed by the WHO (World Health Organization), at the very least 80% population relies upon the traditional remedy for their key healthcare needs. The old therapeutic techniques, mostly the utilization of restorative herbs, still have a lively influence to protect the essential wellbeing wants in the developing nations 1-3. The therapeutic estimation of these plants relies upon the chemical constituent that creates a known practical activity on the metabolism of human body.

Inside the ongoing years, regularly expanding helpful issues are the expanded level of diseases and antibiotic resistance. The utilization of plant and its products have been utilized for numerous long time, that started with conventional drug and throughout the years has been joined into allopathic prescription. Since, the distant past, numerous plants classes affirmed having pharmacological impacts as they are known to have different 2° metabolites like glycosides, saponins, flavonoids, steroids, tannins, alkaloids, terpenes which are, in this way, ought to be utilized to experience the organisms 4-7.

Herbs used in conventional remedy contain an extensive variety of chemical constituents that can be used to treat and control continuing as well as infectious diseases. Natural products obtained from higher plants may have a new foundation of antimicrobial medication with the possibly innovative mode of action 8. They are useful in the treatment of infectious diseases while at the same time reducing many of the side effects that are often related to chemically produced antimicrobials. Therefore, it is of great attention to carry out a study of these herbs to quantify their use in popular medicine and to disclose the mechanism of action by segregation and description of their constituents 9.

Material: Crude plant material was collected from the local area and authenticated by National Institute of Pharmaceutical Education and Research (Mohali), Fluconazole was purchased from Yarrow chemicals, Mumbai. 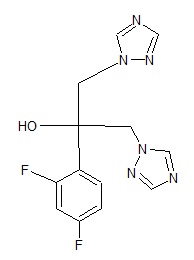 Mechanism of Action: Fluconazole cooperates with 14-α demethylase, which is a cytochrome P-450 protein important to change over lanosterol to ergosterol. As ergosterol is a fundamental segment of the cell membrane candida albicans, restraint of its union outcomes in expanded cell penetrability causing leakage of the cell membrane. Fluconazole may likewise hinder endogenous respiration, cooperate with film phospholipids, restrain the change of yeasts to mycelial shapes, repress purine take-up, and weaken triglyceride and additionally phospholipid biosynthesis.

Candida albicans: Candida albicans is dependent pathogenic yeast that is a common part of human microbial flora. It does not multiply outside human gut flora. Almost 40-60% of healthy adult’s population has candida albicans in their GIT and mouth. More than 20 species of candida can cause candidiasis in humans.

Candida yeast mainly resides in the intestinal tract and can be found on the mucous membrane without causing any infection; mainly overgrowth is responsible for the infection 11. Candida can be found mainly in two physical forms, the yeast can survive in acidic conditions, although the fungal form flourishes in a neutral or alkaline ph. Therefore, it is difficult to treat with a single therapy Fig. 2 & 3.

Fluconazole Gel Preparation: The composition of fluconazole topical gel was shown in Table 1. Fluconazole (1% w/w) was dissolved in a heated mixture of propylene glycol (20% w/w) and glycerine (10% w/w) used as the moistening agent. Cellulose polymer (HPMC, MC), polyacrylic acid polymer (Carbopol 940) gel was prepared by adding the calculated amount of in warm water. The previous mixture of the drug was added in the polymer mixture 12. Triethanolamine (TEA) was used as a pH regulator, for the proper mixing of ingredients agitation should be continuous.

Finally, propylparaben and methylparaben were added with continuous slow shaking as a preservative. The prepared gel was placed in a round neck closed container in a dark room at room temperature Table 1.

Neem Leaves Extract Preparation: Neem leaves extract has been prepared to dry 100 gm of dried plant leaves and ground into powder for the better mixing with hexane Fig. 4. After filtration by muslin cloth, the filtrate was evaporated using rotary evaporator below 30 °C and extract stored at 4 °C 13. 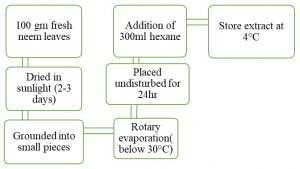 Curcuma longa Extract: Fresh rhizomes of Curcuma longa were taken and grounded finely in mortar pestle with the addition of water and then exposed to steam distillation. The oily fraction was collected, and residue in water was filtered in a conical flask 14, 29. The water fraction was evaporated using vacuum condition overnight to give water extract. The residue was air dried and left overnight in chloroform (200 ml) and filtered, after that it is re-extracted twice with chloroform. All the chloroform fractions were combined, and solvent was evaporated to get chloroform extracts Fig. 5. The residue obtained after chloroform extract was again extracted with methanol to give the methanol extract 15, 30. 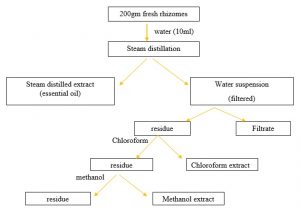 Visual Examination: Visual inspection of the prepared gel has been carried out for color and appearance. The observations reported that the color of gel formulations was white and was free from any gritty particles.

Spreadability Test: Spreadability test of the prepared gel have been carried out with “parallel plate method.” The gel is being placed between two glass slides having a specific length. Weight has been placed on the upper glass slide for complete distribution of the gel in between glass slides. After some time, weight was removed. The plates have been fixed in such a way that the upper plates slide down from lower plate with the help of weight tied to it, the time is taken for the upper slide to slid from lower slide been noted down.

The steps are followed three times and mean were taken.

Drug Content Uniformity Determination: Drug content determination has been carried out by taking 10 gm prepared gel in a conical flask containing 50 ml phosphate buffer having pH of 7.4, with continuous shaking for the complete mixing of the drug. The resultant mixer was then filtered through a 0.45 mm filtration membrane. The solution is then stored for 24 h absorbance of the different dilutions had been determined at the 266 nm wavelength.

Rheological Studies: The viscosity of prepared formulation was determined at 25 °C using Brookfield viscometer. The spindle (no. 62) was rotated at specific rpm dial reading was noted down for further calculations.

In-vitro Drug Release Study: Apparatus contains a glass cylinder (10 cm in height and 3.7 cm diameter) having both the sides open a cellophane membrane (previously soaked in distilled water) were tied at the end of the tube. 10 gm of gel was placed on the cellophane membrane in donor compartment, and the cell was immersed in a beaker (recipient compartment) having 100 ml phosphate buffer (pH 4.6) lower end of the test-tube should be placed like this it touches the surface of diffusion medium in recipient compartment.

Well Diffusion Assay: Subouraud dextrose agar media (SDA) is used for the determination of antifungal activity of plants extracts. Micro-organisms were spread over the media with the help of cotton plugs. Wells with a diameter of 8-10 mm have punched aseptically with the cork borer or a tip. Concentration ranges of plant extracts in 20 µl - 100 µl were placed in wells using a suitable solvent (DMSO). Then agar plates were incubated at 37 °C for 24-48 h Results were noted down in diameter inhibited growth of Candida albicans by extracts 17.

Visual Examination: Visual inspection of the prepared gel has been carried out for color and appearance. The observations reported that the color of gel formulations was white and was free from any gritty particles.

Spreadability: Spreadability test of the prepared gel have been carried out with “parallel plate method.” The gel is being placed between two glass slides having a specific length. Weights have been placed on the upper glass slide for complete distribution of the gel in between glass slides. After some time, weight was removed. The plates have been fixed in such a way that the upper plates slide down from lower plate with the help of weight tied to it, the time is taken for the upper slide to slid from lower slide been noted down Table 1.

pH Determination of Various Prepared Formulations: The pH range of all formulation comes under the range of 5-7, which is acceptable for the avoiding of reduction risk of irritation during application. Results are tabulated in Table 2.

Viscosity Determination: The viscosity ranges of all formulations from 1230-1840 centipoises Table 4. Viscosity is directly proportional to polymer concentration; more the concentration of the polymer represents the higher viscosity in the formulation Fig. 6. 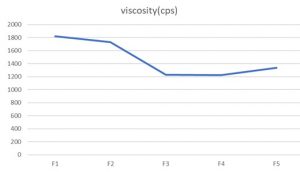 In-vitro Drug Release Study: The in-vitro release profile of all the prepared formulations was represented in Fig. 7. It was observed that the release of the drug from the formulation could be ranked in the following descending order: F4>F1>F5>F2>F3; the amount of drug release after 4 h was 90.64%, 83.49%, 80.86%, 80.24%, and 79.56% respectively Table 5. It was observed the factors which are affecting the drug release are polymer concentration and type of the polymer. 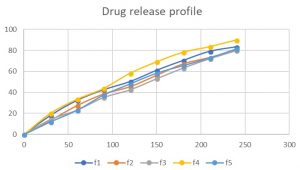 TABLE 9: ZONE OF INHIBITION VALUES AFTER COMBINATION OF GEL FORMULATION WITH PLANT EXTRACT

FIG. 9: EFFECT OF A. INDICA EXTRACTS IN COMBINATION WITH FLUCONAZOLE GEL ON CANDIDA ALBICANS

CONCLUSION: Current study indicates that the plant herbal extract and antimicrobial agents combination approach provides significant therapy for the development of potential treatment for microbial infections. The antifungal activity observed for the plant extracts used in the study indicates the further development of effective alternate antimicrobial remedies. Crude extracts of Azadirachta indica and Curcuma longa have been used previously against various pathogens and proved to be effective. Also they both have shown the synergistic effect with fluconazole against Candida albicans.

After performing all the physiochemical evaluations of the fluconazole gel, all the properties of gel were acceptable as an antifungal agent. The viscosity of the gel was optimum; pH value of all prepared formulations was under 5 to 7, which is acceptable for not causing any irritation and other side effects. All the plant extracts have shown antifungal activity along with synergistic action in combination with fluconazole.

ACKNOWLEDGEMENT: The Author is highly grateful to the Dr. R. K. Abhilashi, Chairman Abhilashi Group of Institutions, Mandi, India for providing necessary facilities to carry out the research.