INTRODUCTION: Noble metal nanoparticles have gained prominence in therapeutic and diagnostic applications 1. Many researchers have now devoted their efforts to the fabrication of bi-metallic nanocomposites like nano - alloys, core-shell and mixed metal nano-particles, owing to their valuable applications 2 - 3.

Fungi are reliable sources for large scale metal nanoparticle production as they offer less stringent handling, simple purification and feasible scale-up. Different fungal species have been reported to synthesize NPs either intracellularly or extra-cellularly. The Cell wall plays a vital role in intracellular nanoparticle formation. The negatively charged cell wall attracts the positively charged metal ions electrostatically and traps the ions 13. The physical parameters like temperature and pH influence the intracellular nanoparticle formation 14 - 15. Fungal synthesis of bimetallic nanoparticles is still less explored 16 - 17. These bimetallic NPs offer the versatility of combining the antimicrobial silver activity with the presence of gold, stabilized with biomolecules.

The strain was then adapted to different concentrations of metal salts (0.05 mM to 1.5 mM) each of HAuCl4 and AgNO3 solution. The adaptation studies were conducted for continuous six months. The total cultivation time was reduced from seven days to five days and finally up to three days of incubation.

Production of Bimetallic (Silver and Gold) Nanoparticles by Co-reduction: Under aseptic conditions, sufficient cell mass of Trichoderma reesei was separated and washed thrice with distilled water. 20 grams of wet biomass was taken and suspended in to a 500 ml Erlenmeyer flask containing 100 ml of each 10−3 M HAuCl4 and 10−3M AgNO3 solution. Above culture was incubated at 28 °C at 200 rpm for 2 days. For control, fungal biomass was suspended in distilled water and incubated at 28 °C at 200 rpm for two days. The amount of bimetallic nanoparticles produced was measured using ICP-MS.

Characterizations: The fabrication of bimetallic nanoparticles by Trichoderma reesei was analyzed by various analytical techniques. The fungal biomass without nanoparticles and with nanoparticles was centrifuged at 10,000 rpm for 15 minutes respectively. The obtained biomass was freeze dried at -54 °C, followed by lyophilisation. The lyophilised samples were placed on pin stubs and coated with gold under vacuum as they were non-conducting and examined by Scanning Electron Microscopy (SEM) on ZEISS: EVO18 equipped with an Energy Dispersive Spectrometer (EDS) on OXFORD INSTRUMENTS.  Similarly, the samples were prepared for FTIR analysis. The samples were ground with KBr pellets and examined on Shimadzu FTIR-8400 in the range of 4000 - 400 cm-1. For XRD analysis, the sample was cast onto the glass slide and measurements were carried out using Rigaku Ultima IV instrument at the two-theta angle in the range of 20° to 80°.

Antimicrobial Assay: To determine the antibacterial activity of synthesized gold nanoparticles, standard disk diffusion method was carried out against Multi Drug Resistant Strain (MRSA) Staphylococcus aureus. The agar plates having suitable nutrient media (LB media) was prepared, sterilized and allowed to solidify. After solidification, the agar plates were inoculated with bacterial cultures. 6 mm disks were impregnated with required quantity of antibiotic and nanoparticles in petri-plates containing suitable nutrient agar medium seeded with 120 μL of 36 h of each pathogen.

20 μg/ml (Minimum Inhibitory Concentration (MIC) of Daptomycin antibiotic, 20 μg/ml (equal amount as that of antibiotic) of nanoparticle and a mixture of both Daptomycin and lyophilized nanoparticle  was formulated. 150 μl of each of these was impregnated on the corresponding disks and incubated at 28 °C for two days. The diameter of zones of inhibition was measured using a ruler and mean value was recorded for each pathogen and expressed in millimetre (mm). All the above experiments were carried out in duplicate. 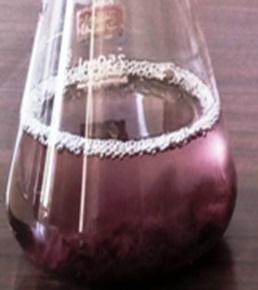 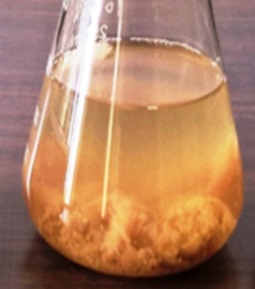 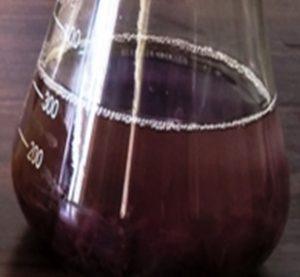 UV-Visible Spectroscopy studies of blank media revealed no characteristic peak near the 450 and 520 nm range indicating no extracellular synthesis (as per no change in media color). After two days, the biomass in the blank was white while it turned to yellowish color for silver nitrate supplemented broth. This indicated the formation of silver nanoparticles. Also, gold nanoparticles showed ruby-red color and the bimetallic nanoparticles showed dark purple color. The morphology of the cells and the metal salt concentration were two essential prerequisites for bimetallic nanoparticles formation. The optimum concentration of metal salts for the nanoparticles synthesis was found to be 1 mM (threshold level). Metal salt concentrations lesser than 1 mM did not give significant results and the cells died at concentrations beyond this level. Biomass supplemented with 1 mM of both metal salts showed color changes after 48 hours of incubation in dark conditions. The color change indicated the Nanoparticles’ formation. The bimetallic nano-particles produced were kept in the dark at 4 °C and even after one month, no major changes were observed (color or any physical appearance) making it stable 26 - 27. ICP-MS of the residual salts revealed that more than 75% of the metal salts were converted to nanoparticles as shown in Table 1.

TABLE 1: ICP-MS OF THE RESIDUAL SILVER AND GOLD SALTS

UV-Vis Spectroscopy: UV-Vis spectrum for Au, Ag and Au/Ag nanoparticles after separation and purification from the fungal biomass showed peaks at 550, 450 and 480 nm, respectively Fig. 2. 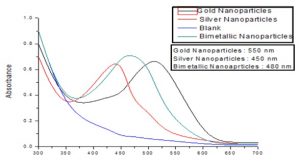 SEM - EDS Analysis: Fig. 3 and 5, represent the SEM images of the fungal biomass samples before and after treating with metal salt solutions.

The SEM instrument equipped with EDS studies were carried out for the composition analysis. EDS spectrum of fungal biomass samples before and after treating with Gold-Silver salt solutions are displayed in Fig. 4 and 6. 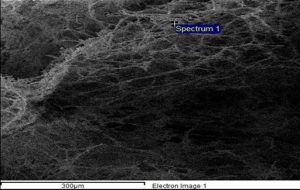 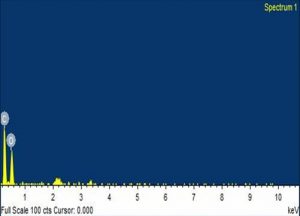 FIG. 4: EDS IMAGE OF THE FUNGAL BIOMASS SHOWING ONLY CARBON AND OXYGEN PEAKS 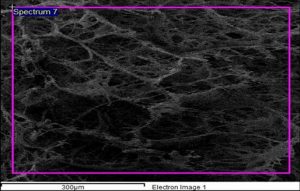 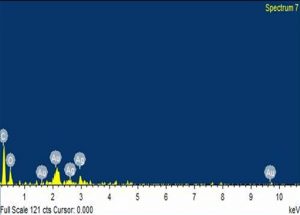 Fig. 4 shows strong carbon and oxygen peaks, which could be attributed to the bio-molecules that

Fourier Transform Infrared Spectroscopy (FTIR) Studies: FTIR measurements were carried out to identify the possible (protein) bio-molecules responsible for the capping and efficient stabilization of the metal nanoparticles synthesized by Trichoderma reesei. FTIR studies were conducted to determine the various chemical functional groups present in the sample containing the nanoparticles 17. FTIR spectra of untreated fungal biomass and fungal biomass supplemented with gold and silver metal salts were shown in Figure 7 and 8. The IR peak shifts shown at 3421, 2854, 2341, 1659, 1473 and 1035 cm-1 indicated the changes in the functional groups. The peak shift from 1458 to 1473, an amide II region, is due to the -NH- bending vibrations from ketone to amine group. The shifting of peak to 1035 can be attributed to the amide bond of C-O stretching mode to N-O vibration mode indicating the presence of carboxylic group and amide groups in the material bound to the synthesized Ag-Au nanoparticles. The peaks at 2854 and 2341 can be attributed to the –C-H groups where the carbon is of sp3 hybridization and stretching of –O-H bond of carboxylic acids respectively. The band at 1659 cm-1, an amide I region, corresponds to carbonyl (–C=O) stretch in the proteins. 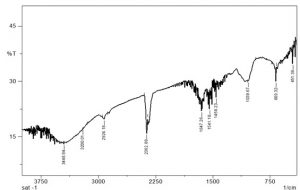 This was further confirmed by band at 3421 cm-1. Similarly, Honery et al., 28 and Sandt et al., 29 pointed out similar chemical changes in functional groups resulting in nanoparticle formation in their FTIR studies. Further, the FTIR studies indicated that the secondary structure of the proteins was not affected because of their interaction with Ag-Au nanoparticles. The appearances of peaks in the amide regions were characteristic of proteins / enzymes that were found to be responsible for reduction of metal ions indicated the binding of nanoparticles with proteins. FTIR spectroscopy studies confirmed that the carbonyl group of amino acid residues and peptides of proteins has a stronger ability to bind the metal, so that the most proteins could most possibly form a coat covering the metal nanoparticles (i.e. capping) to prevent agglomeration of the particles and thus, the nanoparticles are stabilized in the medium 30 - 31. 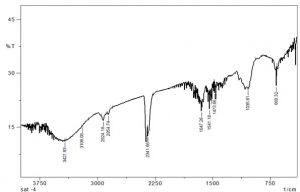 X-ray Diffraction Studies: Further the evidence for the formation of Gold Silver Bimetallic Nanoparticles was provided by the X-Ray Diffraction analysis. The crystalline nature of bi-metallic nanoparticles synthesized by Trichoderma reesei was determined by Bragg’s diffraction peaks evident from XRD pattern as shown in Fig. 9. XRD pattern of bimetallic Ag-Au NPs, the Bragg’s reflection peaks at 2q values of 38.4° (111), 44.6° (200), 46.3° (200), 64.6° (220) and 77.3° (311) were observed. All these values showed the Face Centred Cubic (FCC) structure of the obtained nanoparticles having different lattice planes.

The Bragg’s peak positions in the spectrum and their intensities were compared with standard JCPDS files [JCPDS file nos 04-0783 and 01-1174, respectively].  The fraction of the intensities of the (200), (220), (311) peaks were found to be much lower, suggesting 111 is the predominant orientation. The remaining unidentified peaks in XRD pattern including a sharp peak at 27.9°, 54.9° and 57.4° can be attributed to the crystalline nature of capping and stabilizing proteins present over the surface of synthesized Gold-Silver bimetallic nanoparticles from Trichoderma reesei 32. Likewise, similar values of Bragg’s diffraction peaks for the Ag-Au bimetallic nanoparticles were reported by Sawle et al., Basavaraja et al., and Shankar et al., 33 - 36.

The mean diameter of the Au-Ag NPs was calculated from the XRD pattern according to the line width of the maximum intensity reflection peak using the Debye Scherrer’s equation:

Where K is a dimensionless shape factor with a value close to unity, l is the X ray wavelength in angstrom, β1/2 is the width of the XRD peak at half height and q is the Bragg’s angle. The calculated average particle sizes of the Au-Ag NPs were found to be 25 - 40 nm.

Thus, the XRD pattern clearly shows that the Au-Ag NPs were formed by the reduction of metal ions and are in crystalline in nature. 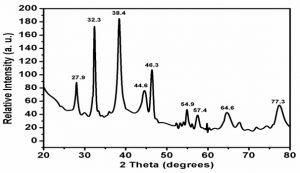 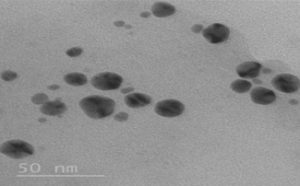 CONCLUSION: In the present study, silver and gold bimetallic nanoparticles were synthesized using Trichoderma reesei. The synthesized nanoparticles were confirmed using SEM - EDS, and XRD and their stability was analyzed by FTIR. Production of bimetallic silver and gold nanoparticles were successfully achieved using Trichoderma reesei and the change of biomass color from colorless to dark purple within 48 hours of incubation period indicated it to be intracellular bimetallic nanoparticle synthesis. Characteristic peaks near the 420 nm - 540 nm range were revealed by UV-vis Spectroscopy studies indicating intracellular nanoparticle formation. No extracellular synthesis (as per no change in media color) was observed. The stabilization of the nanoparticles by the carbonyl group of amino acid residues and peptides of proteins was confirmed by the FTIR spectroscopy studies.

The antimicrobial properties of the synthesized bimetallic nanoparticles in combination with antibiotic were found to be promising for treating infections caused by pathogenic bacteria. Though, the mechanism of action of this combinatorial drug is yet not deciphered. Future prospects of this work would involve extensive research on the exact mechanism involved and other relevant clinical applications.

ACKNOWLEDGEMENT: The authors would like to thank the Central Instrumentation Facility Centre, IIT (BHU), Varanasi for SEM-EDS analysis and Department of Chemical Engineering and Technology for XRD analysis.

COMPETING INTEREST: The authors declare that   have no competing interests.