ABSTRACT: Reactive oxygen species are associated with ageing process creating many health disorders such as Alzheimer, Parkinson, cancer, atherosclerosis and arthritis etc. These harmful actions of reactive oxygen species can be controlled to the some extent by using antioxidants which are present in plants, fruits, vegetables and spices. Turmeric, black pepper and clove are popular spices and have been used in traditional medicine. Their bioactive constituents i.e. curcumin, piperine and eugenol show many pharmacological impact on the nervous and neuromuscular system. Antioxidant activity of methanolic extract of above spices and their bioactive constituents have been evaluated synergistically by 1,1,-Diphenyl-2-picrylhydrazyl assay. Highest antioxidant potential is reported in mixture of curcumin and eugenol (97.38%) followed by methanolic extract of clove (95.91%) and mixture of methanolic extract of turmeric and clove (94.23%). Our studies clearly suggest that extract and their bioactive constituents individually does not shows as much as antioxidant potential as when they are mixed in definite proportion which may be due to synergistic effect.

INTRODUCTION: It is a well known fact that free radicals and other reactive species formed in living cells play an important role in origin of life and biological evolution. Free radicals can also cause lipid peroxidation.

Although there are some synthetic antioxidants like Butylated  hydroxyanisole (BHA)  and butylated hydroxy toluene (BHT) but all these are associated with some side effects.

A majority of plant species have been investigated time to time for their use as antioxidants.

A tendency among modern consumers is the use of antioxidant obtained from natural sources, increased the interest in research. The general public, scientists, medical practitioners, nutritional and health experts are interested to know the antioxidant capacity of the food we eat, fruits, vegetable spices we consume. It has been observed that it is very difficult to separate each constituent of the food and then test the antioxidant potential individually as it is not only time consuming but also a costly affair. Therefore scientists are interested in looking a convenient method to test the antioxidant capacity of compounds in food mixture. For this purpose, antioxidant activity of turmeric, clove, black pepper and their active principals; curcumin, eugenol, piperine and their synergistic combination has been tested by DPPH* assay.

Turmeric (Curcuma longa) belongs to family Zingiberaceae which are found throughout the tropics of Asia, Africa and Australia. It has wide range medicinal properties. It mainly contains curcumin, phenolics, terpenoids, flavonoids, which are present in its rhizomes. Very few investigations have been carried out in the aqueous principles.

Curcumin is the principal curcumenoid of the popular Indian spice turmeric which possess different medicinal properties 4, 5. The other two curcumenoids are demethoxycurcumin and bis-demethoxycurcumin. Curcumin is as powerful antioxidant as vitamin C, E and β-carotene 6. In another investigation curcumin and its synthetic bioconjugates are also reported as good antioxidant 7.

Recently oil of black pepper was tested for antioxidant activity by DPPH*, ABTS+ and β-carotene bleaching method and it shows antioxidant potential 10, 11.

Clove (Syzygium aromaticum) is a member of family Myrataceae. These are the flower buds which resemble irregular nails. Good quality clove buds contains 15-20% essential oil which is dominated by eugenol (70-85%), eugenyl acetate (15%) and β-caryophyllene (5-12%) which together make up 99% of the oil14. The other constituents are methyl amyl ketone, methylsalicylate, α and β- humulene, benzaldehyde, β- ylangene and chavicol.

Clove essential oil has the highest antioxidant capability compared to any essential oil, perhaps one of the highest known for a food or supplement. It has been included in some longevity formulae for this reason. Clove and eugenol possess strong antioxidant activity which is comparable to the activities of the synthetic antioxidants, BHA and pyrogallol 15.

MATERIALS AND METHODS: Turmeric, black pepper and clove were purchased from the local market. Chemicals such as: curcumin, piperine, eugenol and gallic acid were purchased from CDH Pvt. Ltd. New Delhi, India. 1,1-diphenyl-2-picrylhydrazyl (DPPH*) was purchased from HiMedia Pvt. Ltd. Mumbai, India and Methanol AR was purchased from Loba Chemie Pvt. Ltd. Mumbai, India. The absorbance of all sample were recorded by UV- Visible spectrophotometer (Systronic, Model No. 1302). The experiments were performed in the Department of Chemistry, CMP Degree College (Constituent College of University of Allahabad) and Department of Biochemistry, SHIATS, Allahabad during July 2013 to December 2013.

The stock solutions of the extracts were prepared in methanol (1 mg/10 ml). Different volume (1.0, 0.5, 0.25, 0.125 and 0.062 ml) of extracts was taken in separate test tube and volume was made up to 2 ml with methanol. Now 2ml of DPPH* solution was added in each test tube and kept in dark for 30 minutes. The same procedure was followed for gallic acid as well. Later optical absorbance was recorded at 517 nm using UV- Visible spectrophotometer.

Methanol with DPPH* was used as a control. All the samples were tested in triplicate. The formula used for the calculation is:

RESULTS: The antioxidant value of methanolic extracts of different plants, their bioactive constituents and various mixtures were evaluated by DPPH* assay (Table 1). 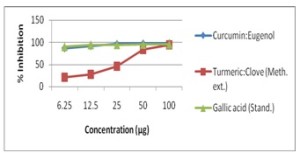 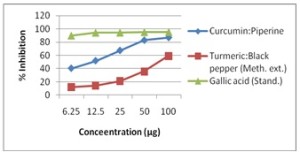 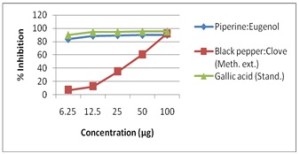 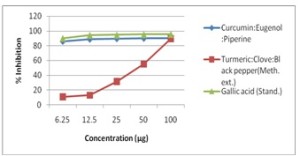 The mixture of methanolic extract of turmeric and clove (1:1),  showed higher antioxidant activity with 94.23% inhibition in comparison to the mixture of black pepper and clove (1:1); turmeric, clove and  black pepper (1:1:1); turmeric and black pepper (1:1) with DPPH* % inhibition of 92.16, 89.73 and 59.29 respectively. The bioactive constituents eg curcumin and eugenol (1:1) mixture exhibited higher antioxidant activity with 97.38% inhibition, which is followed by piperine and eugenol (1:1); curcumin, eugenol and piperine (1:1:1); curcumin and piperine, with 90.23, 90, and 86.67% respectively in comparison to gallic acid. It is very important to report here that the curcumin and eugenol synergistically showed higher antioxidant potential than the standard gallic acid.

The most prominent antioxidant activity has been observed in the extract of clove; mixture (1:1) of extract of turmeric and clove; curcumin and eugenol as compared to all other samples.

ACKNOWLEDGEMENT: The authors Archana Pandey, Ravindra Kumar Gupta and Roli Srivastava are thankful to University Grants Commission, New Delhi, India for financial assistance and all the authors are grateful to Department of Chemistry, CMP Degree College (Constituent College of University of Allahabad) and Department of Biochemistry, SHIATS, Allahabad for providing necessary facilities