On perusal of literature, the survey revealed that the azomethines have got extensive applications in Biological, Industrial and Pharmaceutical fields. Complexes with bidentate azomethines (Schiff bases) were reported to possess biocide activity against bacteria and fungi 2.

Sing and his co-workers synthesized some boran complexes with Schiff bases and studied the antifungal and antibacterial activity 3. Schiff bases derived from the condensed product of methyl cyclopropyl ketone’ and di alkyl phosphates showed aphicidal activity 4. The twenty-six thiazole Schiff base derivatives prepared Synthesized by Mahapatra showed antifungal activity against curvularia Species 5. The antifungal property of some nickel-Schiff base complexes was studied and the complexes were more active than the free ligands against all the fungi tested 6. Fifteen Transition metal with three different Schiff bases have been synthesized and screened against some fungal Pathogens and among these Cu [II] and Co [II] complexes with benzlil-touldine ligand showed high fungi toxic result 7. Schiff base derived from 5 nitro and 3-chloro salicylaldehyde and their complexes with Mn [II], Fe [III], Co[II]Ni[II] and Cu[II] have been studied for fungicidal activity using the growth method 8, 9. Fluorination on the aldehyde part of the molecule enhanced the insect caricidal activity when compared to fluorination of amine part 10 Schiff base obtained from tris and glyoxal was   studied for its pesticidal activity by Nicolae et al. 11 Quinoline exhibits antipyretic activity, although it is too toxic in nature for use in therapy, efforts were made to prepare non-toxic compounds to replace the expensive Quinine. Nevertheless, several quinine Schiff base complexes possessing antipyretic activity have been synthesized but they failed to exhibit antimalarial action which was a characteristic property of quinine although it is too toxic in nature for used therapy.

2-amino-2-methyl-1-propanol: Alkanolamines are chemical compounds that contain both hydroxyl (-OH) and amino (-NH2, -NHR, and -NR2) functional groups on an alkane backbone 12. Literature Survey revealed that not much work has been carried out in establishing the complexing ability of AMP towards metal ions. Metal-AMP complexes were found to wide range applications in biological fields. Metal complexes prepared by the reaction of tetrachloroaurate with AMP in aqueous media were recommended as anti-tumor agents 13 Werner coordination complexes 14 synthesized by reacting benzotrizoles with a mono epoxide afforded mixture of 1-and2-hydroxy alky benzotrizoles and etherifying the mixture with an alkaline succinic anhydride to form a monoester and its salts were prepared with metals selected form IB, IIB, IVB. And VII of the periodic table and complexing these salts with AMP form chelate complexes and they found to exhibit moderate antifungal activity.

Synthesis of Azomethines: All the chemicals used were analytical grade, bought from Raju chemicals in Ananthapur. India. Aromatic aldehyde (2-hydroxy- 3- methoxybenzaldehyde, 4- hydroxy-methoxybenzaldehyde, 4-hydroxy 3, 5 dimethoxy-benzaldehyde,  3, 4 dimethoxybenzaldehyde, 3, 4, 5- Trimethoxy –benzaldehyde) was added to  a mixture of 50 ml of methanol and 2-Amino-2-methyl-1-propanol(AMP) (5 ml; 0.05 mole) and 50 ml of distilled water. The reaction mixture was taken in a clean 250 ml round bottom flask and stirred well with a magnetic stirrer. Then it was refluxed for 8 h.

A Bright yellow [AZM1] and [AZM2] buff [AZM3], colorless [AZM4], yellow [AZM5] colored products were formed. These were separated by filtration and washed several times with hot water and methanol and dried in vacuum. The compounds were recrystallized from methanol.

Medium: The medium used for testing was a nutrient agar medium. The medium was prepared by dissolving peptone-5g, Beef extract-3g, NaCI-5gm, agar-15gm in 1 liter of distilled water. The contents were mixed thoroughly. The pH was adjusted to 7.4-7.6. The medium was sterilized in the autoclave at 15 lbs. per Sq. inch pressure for 15 min.

Inoculums Preparation: The inoculums were prepared by picking up five to ten colonies bacilli and E. coli with a loop. The colonies were suspended in a nutrient broth and incubated at 37 ºC for 3 to 4 h.

Disc Preparations: What man filter paper No.1 was taken and discs of 6 mm in diameter were punched with a puncher. The filter paper discs were sterilized in a hot air oven. The sterilized paper discs are soaked in 5 ml of methanol containing known concentration (150 ug/ml) of the samples AZM1, AZM2, AZM3, AZM4, AZM5 for 2-3 min. The discs were of allowed to dry for solvent and they get evaporated from the paper discs.

Maintenance and Sterility: All the required apparatus were sterilized before use and every reasonable Precaution was observed to avoid contamination throughout the operation.

Procedure of Testing: Sterilized nutrient agar medium 15-20 ml was poured into sterile Petri plates of the same size in aseptic conditions. The medium was allowed to solidify the bacterial Culture was spread uniformly on the surface of nutrient agar medium with sterile cotton swabs.

The Paper discs soaked with a solution of known concentration of the desired Schiff base metal complex and they were placed under aseptic conditions at a particular distance in each per plates, containing known bacterial suspension. The Petri dishes were labeled with the compound and then incubated at 37 ºC for 24 h of incubation. The latch Petri plate was observed for bacterial growth and the zone of inhibition of bacterial growth in each Petri plate was measured. The discs Soaked with the respective solvents of test solutions were used as controls. The zone of inhibition of bacterial growth in the Petri plates under examination was measured. The minimum inhibitory concentration (MIC) was measured by taking 150 ug/ml of the test sample for antibacterial studies. 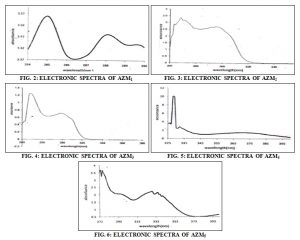 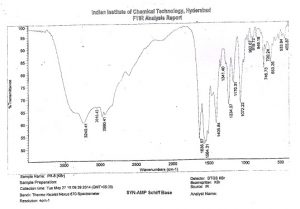 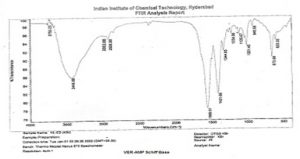 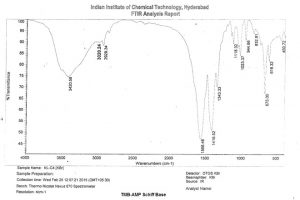 The antibacterial studies were carried out using the chloramphenicol and ketocanazole as reference standards. The results pertaining to the antibacterial activity of azomethines against gram-positive and gram-negative bacteria was presented in the Table 3 and the zone of inhibition of azomethines was demonstrated in Plate 1 and Plate 2. 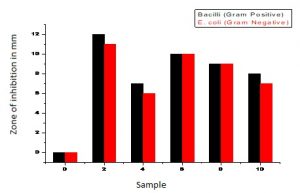 ACKNOWLEDGEMENT: The author expresses sincere thanks to IICT-HYD for providing IR facilities, the author also expressing thanks to the Department of Chemistry, Sri Krishnadeveraya University for supporting to carry out research work. One of the authors is thankful to UGC, New Delhi for providing financial assistance as PDF, UGC Postdoctoral fellowship.

We are also thanks to Department of Chemistry Sri Krishnadeveraya University, Anantha Puram, India for supporting this study.