ABSTRACT: The vast investigations on the derivatives of 1, 2, 3-benzotriazole explore wide applicability for tagging and delivering a number of other heterocyclic nuclei with benzotriazole. In the present work, several derivatives of 1-(substituted)-5- [(N-benzotriazolo-methyl)-1, 3, 4-thiadiazolyl]- imidazole-2-thione have been synthesized and are evaluated for their anticonvulsant activity. The anticonvulsant activities of the synthesized derivatives were assessed by the maximal electroshock (MES) method. Electric shock (50 mA for 0.2 sec) was delivered with the help of a corneal electrode to induce hind limb tonic extension. The synthesized derivatives X2, X3 and X6 exhibited significant anticonvulsant effect against MES-induced seizure model as an indication for compounds which are effective in grand mal epilepsy.

INTRODUCTION: 1, 2, 3-benzotriazoles were reported to have potential fungicidal 1 and antibacterial activity 2. Similarly, 1, 3, 4-thiadiazole derivatives were also reported to possess fungicidal, herbicidal, bactericidal 3, pesticidal, insecticidal, antihistaminic, anti-amoebic 4, CNS depressant, antihypertensive, anticonvulsant, hypnotic, analgesic 5, anti-inflammatory 6 and agonist for 5-Ht receptor 7. 4-thiazolidinone nucleus has also occupied a unique place in the field of medicinal chemistry due to its wide range of biological activities like antibacterial, anticancer 8, Respiratory, syncytial, virus Inhibitor 9, anticonvulsant 10, sciatic nerve blocking, local anaesthetic, inhibitors of human (CK2) protein kinase 11, hypnotic, fungicidal, cysticidal, anti-leukemic and antioxidant activity. In view of potential biological activities of benzotriazole, thiadiazole and imidazole an attempt was made to unite these nuclei together and synthesize some new derivatives of benzotriazole (X1-X6) to screen out some derivatives for significant anticonvulsant activity. The procedure of synthesis has been outlined in Scheme 1.

In India, dissemination of epilepsy was reported to be 5.5–7.9 per 1,000 persons which are around 1/18th of the total population of India 12. The most common anticonvulsant drugs used for the treatments of epilepsy are phenytoin, valproate, carbamazepine, phenobarbital, primidone, and lamotrigine. The currently available drugs, if used judiciously and continuously, abolish seizures completely in 60%–80% of the patients and reduce their frequency in another 10%-20% of the patient. Despite their effectiveness, most of them produce many side effects like drowsiness, nausea, mental dullness, ataxia, teratogenesis, hematological changes, weight gain, paresthesia, hirsutism, congenital malformations and hypertrophy of gums. For these reasons, there is a need for developments of new anticonvulsant drugs to improve epilepsy control and reduce its harmful effects 13. 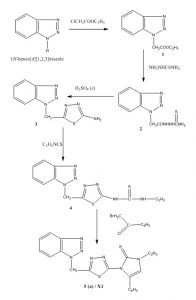 MATERIALS AND METHODS: The chemicals and reagents used in this were of AR and LR grade. They were procured from CDH, Hi-Media, Merck, Sigma Aldrich, and Ranbaxy and the standard drug phenytoin were procured as a gift sample from Royal Research Center, Navsari, Gujarat, The melting points of the synthesized compounds were determined by using Thiel’s melting point apparatus (open capillary tube method) and all the compounds gave sharp melting points and are uncorrected. The purity of the compounds was ascertained by thin-layer chromatography using silica gel-G as stationary phase and appropriate mixtures of the following solvents as mobile phase: n-butanol, glacial acetic acid and water. The spots resolved were visualized using the iodine chamber. The IR spectra of the synthesized compounds were recorded on a Fourier Transform IR spectro-photometer (Perkin Elimer BX-II) in the range of 400-4000 using diffuse reflectance system and values of peaks (ʋ) are reported in cm-1. 1H NMR spectra were recorded on Bruker Av- II 400 MHz NMR spectrometer and chemical shifts (δ) are reported in ppm downfield from internal reference Tetramethylsilane (TMS). Mass spectra were recorded on Shimadzu LC-MS model 2010A. Elemental analysis of the newly synthesized compounds was carried out using Euro - E 3000 series elemental analyzer. 1-(substituted)-5-[(N-benzotriazolomethyl)-1, 3, 4-thiadiazolyl] imidazole-2-thione were prepared as per the method described in the literature 14-16. The synthetic procedure involved the following six steps as stated below.

Determination of Anticonvulsant Activity Methods: Preparation of DMF (Dimethyl-formamide) suspension of synthesized compounds: All synthesized compounds were dissolved in DMF and used as a suspension in physiological saline containing 2 drops of tween 80 and produce a final conc. of 1.0 mg/ml. The standard drug used for this study was phenytoin. Drugs were administered intraperitoneally (i.p.) 30 min before applying electric shock.

Animals: Swiss-albino mice of either sex weighing 25-35 g obtained from our animal house. The animals were housed at 24 ± 2 ºC with 12:12 h light and dark cycle with free access to water and food. The animals were acclimatized for a period of 7 days before the study.

The experimental protocol was approved by the Institutional Animal Ethics Committee (IAEC) of Institute of Pharmacy, Bundelkhand University, Jhansi (U.P.) India. The animals were used according to the CPCSEA guidelines for the use and care of experimental animals.

Experimental Design: On the day of the experiment, the animals were divided randomly into control, standard and experimental groups (n = 6) with each having 6 animals of either sex and were fasted overnight with water ad libitum. Group 1 received the vehicle, normal saline (10 ml/kg, orally) and served as the control group, group 2 received the standard drug Phenytoin (25 mg/kg, i.p.) and group 3 to 8 received DMF suspension of synthesized compounds X1 to X6 Table 2. Drugs were administered to the animals 30 min before applying electric shock.

Maximal Electro Shock (MES) Induced Seizures: MES model was used for the evaluation of the anticonvulsant effect of synthesized derivatives (X1 to X6). Electro Convulsiometer (Model No EC-02) was used for delivering an electric shock (50 mA for 0.2 sec) with the help of a corneal electrode to induce hind limb tonic extension (HLTE) in mice 17-18. The total duration of HLTE, onset of convulsions, and incidence of mortality in all groups of animals were recorded. The animals which did not exhibit HLTE were considered protected.

TABLE 1: CHARACTERIZATION DATA OF SYNTHESIZED COMPOUNDS (5A TO 5F)

A. INTERPRETATION OF IR SPECTRA:

B. INTERPRETATION OF 1H-NMR SPECTRA:

DISCUSSION: The aim of the present study was to investigate the protective effects of synthesized compounds (X1 to X6) on experimental models of convulsions. The MES-induced seizure model is used primarily as an indication for compounds that are effective in grand mal epilepsy 19-20. The present study revealed that the compounds X2, X3 and X6 attenuated the MES-induced tonic seizures indicating that the compounds possess anticonvulsant effects. In the MES induced convulsions, the synthesized compounds X2, X3 and X6 significantly reduced the latency and showed good protection. The effect was comparable with the standard anticonvulsant drug, phenytoin in their respective model of convulsion.

It is difficult to elucidate the exact mechanism responsible for the anticonvulsant action of these synthesized compounds. Most of the anticonvulsant drugs like phenytoin inhibit voltage-dependent Na+ channels and prevent tonic extension in MES-induced convulsion 21-24. Hence, it is possible that synthesized compounds X2, X3 and X6 may have an influence on voltage-gated Na+ channels. It was observed that the alkyl group in the synthesized derivatives at N-1 position of imidazolo-thione ring must contain a chain of three carbons (n-propyl or isopropyl) as in X2 and X3 respectively, to produce anticonvulsant activity while replacement of open chain with an aromatic substituent, at this place (X6), potentiate anticonvulsant property.

CONCLUSION: The derivatives of benzotriazole (X1 to X6) were synthesized with the objective to develop better anticonvulsant agents with a maximum percentage of yield and optimal anticonvulsant activity. The results of the present study suggest that the synthesized compounds X2, X3 and X6 have produced a significant (P < 0.01) delay in onset of seizures in the MES model on oral administration (50 mg/kg, orally) which is comparable to Phenytoin (25 mg/kg, i.p.) and showed good protection against MES induced seizures (50%, 50% and 83%).

Further, investigations with appropriate structural modification of title compound as well as dose-dependent study may result in therapeutically useful products. Further studies are required to elucidate the possible mechanism of anxiolytic activity and its usefulness in human beings.

CONFLICTS OF INTEREST: There are no conflicts of interest between the authors or anybody else with respect to material and research presented in this article.

ETHICAL APPROVAL: The Institutional Ethics Committee approved the study. The approval no. is BU/Pharm./IAEC/13/23.