INTRODUCTION: The term epilepsy refers to a disorder of the brain function characterized by the periodic and unpredictable occurrence of seizures. Epilepsies are common and frequently devastating and affect around 1-2% of world population. Approximately 25% of epileptic convulsions are inadequately controlled by standard drug therapy 1, 2. The search for antiepileptic compound with more selective activity and lower toxicity continues to be an area of investigation in medicinal chemistry.

Aryl semicarbazones represents one of the most active class of compounds possessing anticonvulsant activity 3-5. According to the pharmacophoric model based on semicarbazone, essential features for anticonvulsant activity are presence of a hydrophobic aryl ring, a hydrogen bonding domain, an electron donor acceptor system and an another hydrophobic aryl ring determining pharmacokinetic properties 6.

Functionalized quinoxaline represents an important an important class of nitrogen-containing heterocyclic compounds. Quinoxaline derivatives have been shown to possess a diverse biological activity 7.

MATERIAL AND METHODS: The chemicals and solvents used for the experimental work were commercially procured from E. Merck, CDH, S. D. Fine Chem. and Qualigens, all from India. Syntheses of the title compounds were accomplished according to scheme-1. Melting points were determined in an open capillary tube and are uncorrected. IR spectra (cm-1) were recorded on a FTIR-8400s Shimadzu system. The proton magnetic resonance spectra (H NMR) were recorded on a Bruker 300 MHz instrument (Bruker, Germany) in DMSO-d6 using tetramethylsilane as internal standard.

Chemical shifts (δ) were expressed in ppm. Progress of each step was observed by TLC. The in vivo experiment was approved by the institutional ethics committee and as per CPCSEA guidelines. 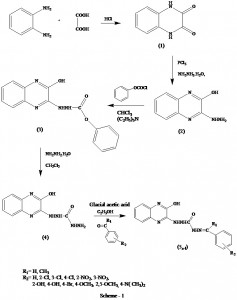 Preparation of 1-(substituted benzylidene)-5-(3-hydroxyquinoxaline-2-yl) carbonohydrazide (5a-l): To a solution of 1-(3-hydroxyquinoxaline-2yl) carbono- hydrazide (0.003 mol) in 25 ml of ethanol, an equimolar quantities of appropriate aldehyde or ketone in 5 ml of ethanol and glacial acetic acid (1-2 drops) were added. The mixture was stirred with heating for 1-4 hours until completion of the reaction and the resultant precipitate was filtered and dried. The solid was recrystalized from 95% ethanol to afford the titled compounds. Physical data and the spectral data are the following.

Anticonvulsant activity: Albino mice (18-25 g) were used as experimental animals. The synthesized compounds and standard drug were suspended in 0.5% methyl cellulose/water mixture. Each compound was administered as an i.p. injection at three 30 mg/kg dose levels and anticonvulsant effects were assessed at 30 min and 4 h intervals after administration. Anticonvulsant evaluation was undertaken using reported procedure 9, 10.

Maximal Electroshock Seizure Screen (MES): Maximal electroshock seizures were elicited with a 60 cycle alternating current of 50 mA intensity delivered for 0.25 s via ear clip electrodes. The maximal seizure typically consists of a short period of tonic extension of the hind limbs and a final clonic episode. Abolition of the hind limb tonic extensor component of the seizure is defined as protection.

Neurotoxicity Screen: The rotarod test was used to evaluate the neurotoxicity. The animal was placed on a 3.2 cm diameter knurled rod rotating at 6 rpm. Normal mice can remain on a rod rotating at this speed indefinitely. Neurological toxicity is defined as the failure of the animal to remain on the rod for 1 min. results are expressed as number of animals exhibiting toxicity/number of animals tested.

RESULTS: 1-(substituted benzylidene)-5-(3-hydroxy quinoxaline-2-yl) carbonohydrazide (5a-l) obtained from reactional sequence were injected intraperitoneally to mice and evaluated for anticonvulsant activity by maximal electroshock seizure test and neurotoxicity screen by rotarod test at the dose of 30 mg/kg. Observations were carried out at two different time intervals of 0.5 and 4 h. Phenytoin was used as the standard drug for the comparison at dose level of 30 mg. The data obtained (Table 2) revealed that all the compounds showed anti-MES activity indicative of their ability to prevent seizure spread. The compound that showed 100% protection at 30 mg/kg body mass was 5c and 5h both after 0.5 and 4 h. Compounds 5e and 5i showed 83% protection. Compounds 5a, 5b, 5g, 5j, 5k and5l showed 66% protection, whereas compounds 5d and 5f were found to be only 50% protective against electroshock induced seizure.

Selected compounds which showed more than 66% protection in the MES screen were further evaluated for neurotoxicity screen at the dose of 30 mg/kg. In this screen none of the compounds showed any sign of motor impairment (Table 2).

Number of animal in each group (n=6). a Dose of 30 mg/kg was administered i.p. Test and the standard compounds were suspended in 1% Tween 80. Animals were examined 0.5 and 4 h after administration. The (-) indicates absence of activity and NT denotes not tested.