SYNTHESIS AND ANTIDIABETIC EVALUATION OF SOME THIAZOLIDINE-2, 4-DIONE DERIVATIVES

SYNTHESIS AND ANTIDIABETIC EVALUATION OF SOME THIAZOLIDINE-2, 4-DIONE DERIVATIVES

Condensation of thiaourea with chloro acetic acid gave Thiazolidinedione which react with aromatic          aldehyde and   produce 5- benzylidine, 2, 4 Thiazolidinedione.To this different secondary amine was reacted and final derivatives was obtained. The structures of these compounds were established by means of IR, 1 H-NMR.All the compounds were evaluated for antidiabetic activities. Most of the compounds have shown significant antidiabetic activity when compared with the standard drug.

INTRODUCTION: Diabetes mellitus, long considered a disease of minor significance to world health, is now taking its place as one of the main threats to human health in the 21st century. The incidence of the disease currently is estimated to reach 210 million by the year 2010 and 300 million by the year 2025 1. Most cases will be of type 2 diabetes, which is strongly associated with a sedentary life style and obesity.

Early stages of type 2 diabetes mellitus (Type 2 DM) are characterized by tissue resistance to the effects of insulin secreted by pancreatic beta cells. The ability of pancreatic beta cells to continue increased production of insulin diminishes over time. When insulin production declines in the face of insulin resistance glucose disposal from the muscle is diminished and suppression of hepatic glucose output is decreased2. Metformin, a biguanides, acts primarily by decreasing hepatic glucose output and increasing peripheral glucose utilization6. It is a first line therapeutic option for Type 2 DM. Another class of drugs, that is, sulfonylureas stimulates insulin secretion by blocking ATP-dependent potassium channels7 but is associated with a significant risk of hypoglycemia. Since the pioneer thiazolidinedione compound, ciglitazone, was reported improving blood glucose level by increasing insulin sensitivity, several new Thiazolidine-2, 4-diones such as pioglitazone, rosiglitazone, was launched into market since 1997.

Antidiabetic Activity: The determination of blood sugar and plasma insulin level is most frequently carried out for screening of antidiabetic activity in biochemical laboratories.  The methods generally used for blood glucose is determination by glucose oxidase/peroxidase method3. Wister rats (200-250 g) and Swiss mice (20-25 g) of either sex were used for the investigation.  The animals were housed in controlled room under standard environmental conditions of temperature (25 + 2°C), humidity (55 + 10%) and light (12:12 h light/ dark cycle; lights on at 07.00h). Rats were supplied with standard pellet diet (Hindustan lever limited, Mumbai.) and tap water.  The animals were handled and acclimatized to laboratory conditions 24 hrs before conducting experiments4.

Synthesis of 2, 4-Thiazolidinedione5, 6: In a 250 ml three-necked flasks was placed, a solution containing 56.5g (0.6M) of chloroacetic acid in 60mL of water and 45.6g (0.6 M) of thiourea dissolved in 60mL of water. The mixture was stirred for 15 min to obtain a white precipitate, accompanied by considerable cooling. The 60mL of concentrated hydrochloric acid from a drooping funnel was added slowly to the content of flask. The flask was then connected with a reflux condenser and gentle heat applied to effect complete dissolution, after which the reaction mixture was stirred and reflux from 8-10 hrs at 110°C. On cooling, the contents of the flask solidified into a cluster of white needles and product was filtered and washed with water to remove traces of hydrochloric acid and dried, purified by recrystallization with ethyl alcohol. Yield was 85% & m. p 123 ° C.

Synthesis of 5- (substituted) - 2, 4-thiazolidinedione: To a solution of Aryl aldehyde (0.25M) and 2, 4thiazolidinedione (0.25M) in hot glacial acid (50mL), fused sodium acetate (1.8g) was added and then it was refluxed for 1 hr with occasional shaking. It was poured in water (500mL), then product obtain was filtered, washed with water, alcohol and ether and was recrystalized with glacial acetic acid.     The physical property of synthesis compound is given table-1. 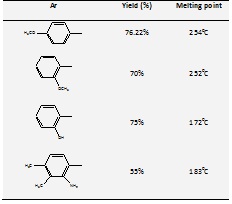 Synthesis of final compound: The compounds (II) (0.05 M) synthesis was dissolve in N, N-dimethyl formamide (15mL). Diethyl/ Diphenyl amine (0.05 M) was added followed by addition of formaline solution (38%) (0.05 M) and was refluxed for 15 hrs. The refluxed solution was kept in the refrigerator for 48 hrs. The product obtain was filtered dried and recrystallized using ethyl acetate8, 9.  The list of final compounds synthesized is given in table-2. 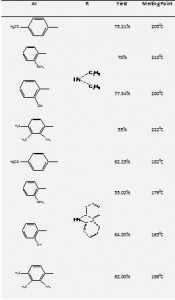 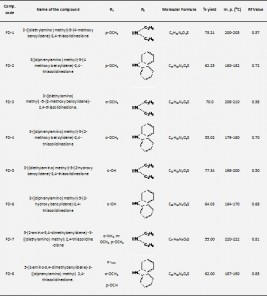 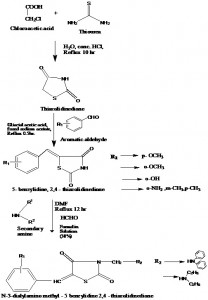 RESULT & DISCUSSION: Thiazolidinedione derivatives were synthesized and the structures of the compounds were established by means of IR and 1HNMR. The ant diabetic activity was determined using an Alloxan induced hyperglycaemia model, and it was found that the compound containing active (FD-1 and FD-2) than the compound –O-CH3 at ortho-position (FD-3 & FD-4). Substitution with –OH group at ortho- position also produces compounds which causes great decrease in blood glucose level (FD-5 &  FD-6) but this decrease in blood glucose level is less than the compound FD-1 & FD-2, FD-3 &  FD-4.