SYNTHESIS AND ANTIMICROBIAL ACTIVITY OF SOME BENZIMIDAZOLE DERIVATIVE WITH IBUPROFEN

SYNTHESIS AND ANTIMICROBIAL ACTIVITY OF SOME BENZIMIDAZOLE DERIVATIVE WITH IBUPROFEN

ABSTRACT:Some novel benzimidazole derivatives were synthesized with ibuprofen and evaluated for its activity. This compound showed notable antibacterial activity against gram-positive organisms and antifungal activity against when compared with respective standards.

INTRODUCTION: Benzimidazole nucleus is an important heterocyclic ring, because of its synthetic utility and broad range of pharmacological activities. Some benzimidazole derivatives with different pharmacological effects, including antifungal 1, anti-helmintic 2, anti-HIV 3, antihistaminic 4-6, antiulcer 7, 8, cardio tonic 9, antihypertensive 10, 11 and neuroleptic 12, are in clinical use. In order to obtain more effective chemotherapeutic agents, a variety of reports have been presented on the synthesis and biological evaluation of new benzimidazole derivatives 13. Many reports have revealed that the influence of the substitution at the 1, 2 and 5 positions of the benzimidazole ring is very important for their pharmacological effects 14, 15. 2-(substituted phenyl)-benzimidazoles with various types of biological activities, such as antibacterial 16, antiviral 17, antitumoral 18, 19 and anti-inflammatory 20, has been reported. Ibuprofen 21 having analgesic and anti-inflammatory based on the reference Ibuprofen undergoes reaction with O-phenylenediamine and replace the -OOH group in the presence of dilute hydrochloric acid. In connection with these studies, a series of some novel Benzimidazole derivatives with Ibuprofen was prepared with the corresponding O-phenylenediamines for evaluation of their biological activities.

Experimental: All melting points were determined using a Buchi SMP-20 melting point apparatus and were uncorrected. IR spectra were recorded on a Jasco FT/IR 420 spectrophotometer as potassium bromide disks (fig. 1a & 1b). 1H NMR analyses were performed with a Bruker AC400NMR spectrometer (fig. 2a & ab). Silica gel plates (Merck F254) and silica gel 60 (Merck; 230-400 mesh ATSM) were used for analytical and column chromatography, respectively. The Ibuprofen, Hydrochloric acid, Sodium hydroxide and Ethanol and O-Phenylenediamine used in this study were purchased from Aldrich Chemical Company.

Synthesis of 2, 3-dihydro -2-[1-(4-isobuty1 phenyl) ethyl]-lH­ benzo [d] Imidazole: A mixture of 1.08gm (0.lmole) of O-Phenylene diamine, 2.06gm (0.1 mole) of Ibuprofen, 5ml of dilute hydrochloric acid were taken into a 250ml round bottomed flask. And the mixture was heated on a water bath at 100°C for two hours, then it was cooled and 10% sodium hydroxide solution was added slowly with constant whirling of flask, until the mixture was just alkaline to litmus, filtered the crude product with the pump, washed with ice cold water, drained well and washed again with ice cold water and dried. The yield of the product was found to be 2 gm, and the melting point was 235°C with decomposition (scheme 1). 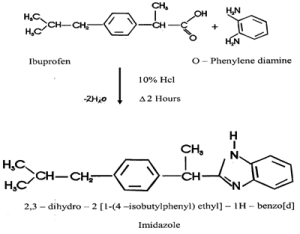 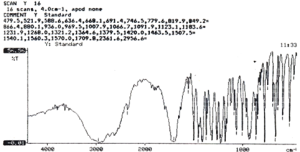 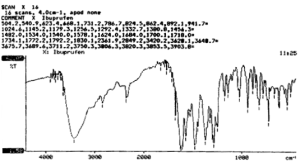 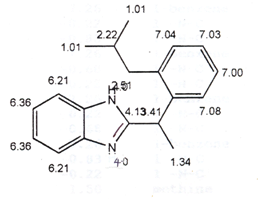 Antibacterial Activity Assay: The cultures were obtained in Mueller-Hinton Broth (Difco) for all the bacteria after 18–24 h of incubation at 37.91oC. Testing was carried out in Mueller-Hinton Broth at pH- 7.4 and two-fold dilution technique was applied. A set of tubes containing only inoculated broth was kept as controls. After incubation for 18-24 h at 37.91oC, the last tube with no growth of microorganism was recorded to represent MIC expressed in mg/ml.

Antifungal activity assay: The yeast C. albicans was maintained in Sabouraud Dextrose Broth (Difco) after incubation for 48 h at 25.91oC. Testing was performed in Sabouraud Dextrose Broth at pH 7.4 and the two-fold dilution technique was applied. A set of tubes containing only inoculated broth was kept as controls. After incubation for 48 h at 25.91oC, the last tube with no growth of yeast was recorded to represent MIC expressed in mg/ml.

RESULTS AND DISCUSSION: 2, 3-dihydro -2-[1-(4-isobuty1 phenyl) ethyl]-lH­ benzo [d] Imidazole (Scheme 1) was synthesized from ibuprofen and O-Phenyl diamine by hydrolysis 22. The amine group of O-Phenyl diamine was coupled with ibuprofen. In these reaction two molecules of water has been released in presence of catalyst Hydrochloric acid and heating. IR spectral data of synthesized compound has been explained in table 2 and protocol of the H-1 NMR prediction in table 3. Compound 2, 3-dihydro -2-[1-(4-isobuty1 phenyl) ethyl]-lH­ benzo [d] Imidazole was evaluated for its antimicrobial activity against S. aureus, E. coli, K. aerugenes, P. aerugmosa and C. albicans by tube dilution technique. Its antibacterial and antifungal activities were determined as MIC values. Table 1 shows the results of in vitro activity determination by a tube dilution method. The synthesized compound showed better activity than fluconazole against C. albicans and equal to that of Cotrimoxazole.