SYNTHESIS AND ANTIMICROBIAL ACTIVITY OF SOME CHALCONE DERIVATIVES AND THEIR COPPERCOMPLEXES

SYNTHESIS AND ANTIMICROBIAL ACTIVITY OF SOME CHALCONE DERIVATIVES AND THEIR COPPERCOMPLEXES

ABSTRACT:In the present investigation, 4-chloro acetophenone on condensation with 2-nitro benzaldehydes in methanolic NaOH solution yielded the corresponding chalcone. These chalcone were further reacted with Isonicotyl hydrazide and semicarbazide in ethanol which led to the formation of chalcone Isonicotyl  hydrazone  and chalcone semicarbazone derivatives respectively. The newly synthesized derivatives and there copper complexes  were characterized on the basis of their chemical properties and spectroscopic data such as IR, NMR and UV. All newly synthesized compounds were evaluated for their antibacterial activities against E. coli and S. aureus also for antifungal activities against P. notatum.

INTRODUCTION: Benzelideneacetophenones belong to the class of naturally occurring pigments which are often referred to as "chalcones". The term was first coined by Kostanecki, who pioneered work in the synthesis of natural coloring compounds. An interesting feature of chalcones is that they serve as starting materials for another class of naturally occurring and widely distributed pigments called flavones 1. Chalcones (fig. 1) have shown promising therapeutic efficacy for the management of human cancers.

They are considered to be precursors of flavonoids and isoflavonoids which are abundant in edible plants. Chalcones are intermediates in the aurones synthesis of flavones.Chemically they are open- chain flavonoids in which the two aromatic rings are joined by a three-carbon alpha-beta- unsaturated carbonyl system (1,3-diphenyl-2-propen-1-one) 2.

Chalcone and their Derivatives: The Yakuchinones and their analogues are interesting due to their inhibitory effects on active oxygen, nematocidal activity, inhibition of lipid peroxidation and inhibition of acyl-CoX.

Iwata and co-workers have reported isomerisation of E-chalcone to the Z form by exposing the methanolic solution of the chalcone to normal visible light 31. Interestingly, the Z isomer showed more potent antitumor activity than the original E form.Photoisomerisation of the predominant E isomer to the Z isomer may cause change in biological activity and the ease with which the reaction occurs suggest that it is prudent to protect solution of chalcones from light.

Ducki et al., noted that the two bonds were positioned cis with respect to each other in several X-ray crystal structures of chalcones 7. The s-cis conformer was more stable than the s-trans conformer by at least 3.9 kJ/mol. On the other hand, when a methyl group was introduced at the C(α) position, the disposition of the carbonyl and C(α)-C(β) double bonds altered to the trans orientation.

For these alpha-methyl chalcones, molecular mechanics calculations showed that the minimum energy contemners were s-trans and no s-cis conformation was evident within a 10 kJ/mol range of the global energy minimum. The alpha -methyl group also caused significant loss of planarity between ring A and the enone ( 56-88°). The α-methylchalcones are found to have greater cytotoxic activity against a human leukemia cell line than the unsubstantiated analogues. Their unique geometrical features were cited as a possible factor contributing to the enhanced biological activity.

Hadjeri M. et al., conveniently substituted flavones, chalcones and quinolones are highly attractive derivatives due to their therapeutic potential. The substitution pattern of these compounds is crucial for their biological activity. Structure-activity relationship of flavone, indicates that: azaflavones are highly active molecules; the 5 and 7 positions are the most important; hydroxyls, methoxy and amino groups are the most beneficial.

Ronot, Xavier et al., reported that Chalcones (1, 3-diphenylpropen- 1- ones) are naturally occurring compounds belonging to the flavonoid family and are largely investigated in various therapeutic area and especially as antitumor drugs. In the latter field, the literature survey indicates that effect on the cell cycle is one of the most important targets domains of chalcones.

Metal Complexes of Chalcone:  Anjaneyulu et al., 33 have suggested mechanism for the toxic action shown by metal chelates on the growth of the microorganism. The high toxic nature of the metal complexes towards viruses can be explained on the basis of the Chelation therapy. Structural studies on several metal chelates of beta-diketones and 2-hydroxycarbonyl compounds have been reviewed by Holm and O'Connor 34.

Lense et al., 35 as well as Palaniandavar and coworkers 36 have reported that o-hydroxychalcones are much more reactive with metal ions than the ketones and aldehyders from which these are synthesized. The o-hydroxycarbonyl compounds form a distinct category among chalcones which can form chelates with metal ions with low spin square-planar configuration, which do not easily form adducts and this has been attributed to the presence of extensive conjugation.Extensive conjugation was found to be responsible for the strong field nature of the ligands.

Rao and co-workers 37 reported the synthesis and structural studies of complexes of Co (II), Ni (II), Cu (II), Zn (II) and Cd (II) with substituted chalcones.The electronic spectral data suggest that all the Co(ll) complexes and Ni(ll) complex of 3-(2-pyridyl)-1-(2-hydroxy phenyl)-2-propen-1-one (PHPO) complex are octahedral and all the Cu(ll) and Ni(ll) of 3-(1-naphthyl)-1-(2- hydroxy phenyl)-2-propen-1-one (NHPO) and 3-(3, 4-dimethoxy phenyl)-1-(2- hydroxy phenyl)-2-propen-1-one (DMPHPO) complex are square-planar. The complex of Zn (II) and Cd (II) are tetrahedral. Devi and co-workers 38 have studied the thermal properties of metal (II) complexes of chalcones. The thermal diffusivity of chalcone metal complexes is enhanced when compared to the parent ligands. So among metal complexes, thermal diffusivity increases with the increase in the free electron density of the metal ion coordination.

Nature of investigation: Chalcones continue to attract considerable scientific attention because of their association with a variety of biological activities. Only the cytotoxic and chemoprotective activities have been reviewed and even with this restriction, it is apparent that meaningful structure-activity correlations are difficult to establish for a specific activity. More importantly, the structural features of chalcones presence of a reactive enone moiety and its relative flexibility compared to other related natural products like flavonoids may predispose the template to interactions with diverse receptors and enzymes. TheC6-C3-C6 motif is recognized as a "privileged structure" in drug design.

Goals of investigation: In the present study employed chalcone (CL)moiety as the primary motif to achieve the inhibitory function which is appended with Semicarbazone and hydrazone pharmacophores as depictedin order to target intermediate kinases of the cell cycle. Conjugation of such ligands with copperis expected to endow antimicrobial property. The present study describes synthesis and characterisation of some chalcone analogues and their copper conjugation and evaluation of their antimicrobial activity. 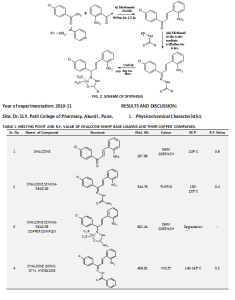 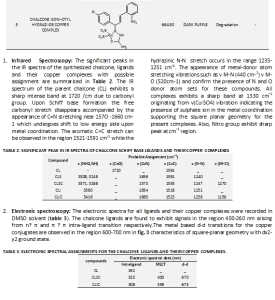 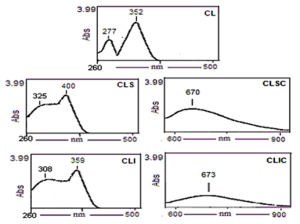 FIG 3. UV SPECTRAS OF SCHIFF BASE OF CHALCONE AND THEIR COPPER COMPLEX 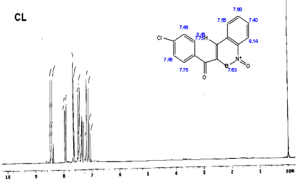 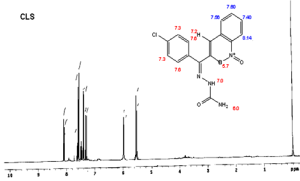 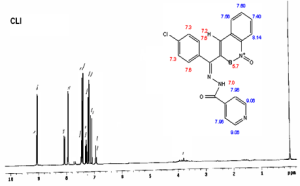 CONCLUSION: The present work represents a novel series of chalcone Schiff base derivatives and their copper complexes exhibiting significant antimicrobial activity towards various microbial strain. In this context semicarbazone pharmacophore is  a good choice for designing such agents. Metal chelation seems to be helpful in enhancing the antimicrobial activity .In antimicrobial activity concentration increases the zone of inhibition also increases.chalcone (CL=21.6mm at 300µM/ml) and chalcone semicarbazone derivative (CLS=20.6mm at 250 µM/ml) exhibiting potent antifungal activity towards P. notatum as compared to standard ( standard = 12.4mm  at 250 µM/ml)  . As well as copper complex of cxhalcone isonicotyl hydrazone derivative ( CLIC = 23mm at 300µM/ml) exhibit promising antibacterial activity towords S. aureus.This strategy can be refined further for optimization.