ABSTRACT: Glycosyl isothiocyanates have been widely used as important intermediates in the synthesis of many biologically active glycosyl derivatives. The glycosyl isothiocyanates have been the focus of synthetic attention during recent years because of their potential pharmacological properties. Thiourea and their derivatives are important versatile reagent in organic synthesis and show strong antibacterial activity. Hence, in view of applications of N-glycosylated compounds in medicinal chemistry and in many other ways, we herein report the synthesis and antimicrobial studies of novel glycosyl thiocarbamides of amino tetrazole and aminopyrimidine. In present investigation, a series of novel protected glycosyl heterocycles were synthesized by reaction of glycosyl isothiocyanate with amino tetrazole and amino pyrimidine. The newly synthesized compounds were characterized on the basis of IR, 1HNMR and Mass spectral studies. Antimicrobial evaluation of the synthesized substituted thiocarbamides is also carried out. Antimicrobial activities of the synthesized compound were evaluated against bacteria E. aerogenesa, B. megaterian, S. marcescens, and M. luteus and Fungi A. niger and Penicillinium. All the newly synthesized glycosyl thiocarbamides exhibit promising antimicrobial activity.

Glycosyl isothiocyanate is proven to be excellent intermediate and has been used for the preparation of a variety of carbohydrate derivatives of synthetic, biological and pharmaceutical interest 6, 7 since they easily undergo many important reactions such as cycloaddition and nucleophilic substitution 8. Thiocarbamide is important class of organic compound and important precursor in the synthesis of many heterocyclic derivatives 7, 9.

General Procedure: A solution of Per-O-acetyl glycosyl isothiocyanate 1a-c (1 mmol) and heterocyclic amines (1 mmol) are refluxed in toluene (50 ml) for 3-4 h. The reaction is monitored by TLC (Ethyl acetate petroleum ether, 1:1). Toluene is distilled off under reduced pressure, sticky mass obtained was triturated with petroleum ether (60-80º). The solid obtained was crystallized from ethanol-water. 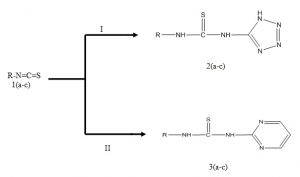 Antimicrobial Assay: The nutrient agar medium was prepared by dissolving 20 gm of nutrient agar in 1000 ml distilled water and autoclaved at 121 ºC temperature and 151bs/inch2 pressure for 20 minutes. After sterilization, it was cooled down to about 50 ºC. Inoculation of the medium was done aseptically with 0.5 ml of stains of E. aerogenesa, B. megaterian, S. marcescens and M. luteus at room temperature. A. niger and penicillinium was done in same manner as for bacterial stains. 15 ml of inoculated molten agar medium was poured into each sterile petridish and allowed to solidify at room temperature. A stainless cork borer of 7 mm diameter was used to bore the cavities. All the synthesized compounds and reference were taken at concentration of 1mg/ml using DMSO as a solvent. For antibacterial assay, the plates were incubated for about 24 h and for Antifungal activities incubation of the plates was done for 48 h. The diameter of zone of inhibition observed around the wells was measured in mm Table 4.

Hence from the screening results, it was found that most of the compounds are found to be more or less effective against microorganisms. Hence, for treatment of diseases these compounds can be used only when they do not have any toxic or other side effects.

TABLE 4: DIAMETER OF ZONE OF INHIBITION (mm) OF COMPOUNDS

The method used in the present study is simple, efficient and inexpensive and has useful applications in the synthesis of pharmacologically important molecules.

CONFLICT OF INTEREST: The authors declare that there is no conflict of interests regarding the publication of this article.