INTRODUCTION: Schiff bases containing azomethine (imine) group (–RC=N–) are usually prepared by the condensation of a primary amine with an active carbonyl compound 1, 2. The formation of variety of metal complexes with such ligands, indicate the spectacular progress in coordination and bioinorganic chemistry. Schiff base complexes of transition metals containing ligand with N, O donors exhibit interesting biological activity. It has now been observed that some of these drugs show increased biological activity when administered in the form of metal complexes 3, 4.

They were used as catalyst, in medicine like antibiotics and anti-inflammatory agents and in the industry as anticorrosion agents8-13. Thus the aim of this study is to observe the impact of chelation on the therapeutic value of the organic compounds/ drugs as biocidal or static agent by creating impact on morphological or physiological cycles14-17.

To 50 mL of DMF, 8.5gm of 3-methl-1-phenyl-2-pyrazoline-5-one (mphp) was added (Figure1). A solution was obtained by gentle heating and stirring. Calcium hydroxide (4gm) was added and when the solution became light yellow then 6mL benzoyl chloride was added drop wise in 2-3 minutes. The reaction was observed to be exothermic and reaction mixture became paste like. The mixture was allowed to cool and was refluxed with stirring for an hour. During this period the bright yellow complex formed, immediately turned yellowish brown. The complex was decomposed by pouring the reaction mixture in 250mL of 2N chilled dilute HCl. A yellowish brown solid of benzoyl derivative (bmphp) (Figure 2)settled. This was collected on the sintered glass crucible, washed with distilled water and then dried in vacuo18. 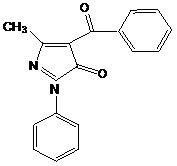 Synthesis of schiff bases of bmphp and sulfa drugs

To 15mL of ethanolic solution of bmphp (1.39 gm) was added a solution of sulfamethoxazole L1 (1.26 gm)/ sulfamerazine L2 (1.32 gm) in ethanol. The resulting solution was refluxed with stirring for 4-5 hours and then filtered to remove insoluble sulfa drug, if any. The filtrate so obtained was concentrated on a water bath and left overnight at room temperature when colored crystals of schiff base separated out from the solution. The crystals were washed with ethanol and dried in the oven19. 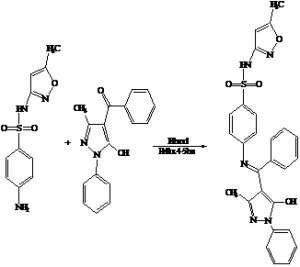 FIGURE 3: SCHIFF BASE LIGAND OF SULFAMETHOXAZOLE AND BMPHP (L1) 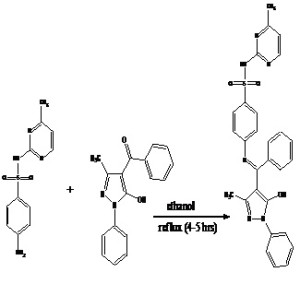 Synthesis of Metal Complexes of Schiff Base Ligands

The metal complexes were isolated, by reaction of aqueous solution of (0.001M) CoCl2 (0.238 gm)/ ZnCl2(0.136 gm) and acetone solution (0.002M) of schiff base ligand L1 (Figure 3) / L2 (Figure 4)in 1:2 ratio. The reaction mixture was stirred for 3-4 hours and the resulting colored crystals were washed with distilled water, crystallized from ethanol and dried in vacuo

In vitro antimicrobial susceptibility tests were performed using a panel of pathogenic and non-pathogenic microorganisms isolates. The bacterial cultures were maintained on nutrient agar slant medium (0.5% NaCl, 0.5% peptone, 0.3% beef extract and 1.5% agar) kept at 4°C and sub cultured every six months. The bacteria were grown in Nutrient broth and incubated at 35ºC for 24 hours before the assay. The test drug sample solutions were prepared at concentration of 10 mg/mL in acetone. Determination of antibacterial activity by disc diffusion technique was based on the method described by National Committee for Clinical Laboratory Standards (NCCLS) (2001).

The test samples were prepared by immersing 0.5 cm sterile paper disc in drug solution for 48 hours. The solutions were dried by air in order to remove acetone. The test medium is nutrient agar on which 200mL of bacterial inoculate 24 hours old was spread with the help of a sterile spreader. The discs were then placed on the surface of nutrient agar medium containing bacterial cultures. After incubation for 24 hours at 370C, antibacterial activities of the drugs were estimated by measuring the diameter of inhibition zones, which had been reduced, by the diameter of disc.

The Schiff base ligands of the present investigation may exist in keto and enol form (Figure 5). The IR spectra of all the Schiff bases show a broad band centered at 3540-3580 cm-1 indicating the involvement of 5-OH group of the pyrazolone moiety (enol form) in the intra molecular hydrogen bonding with the lone pair of the azomethine nitrogen20. This concludes that these Schiff base ligands exist in the enol form in the solid state. The broad band due to phenolic (-OH) in all the ligands is absent in the complexes under study indicating the coordination of the phenolic oxygen after deprotonation to the metal center 21. 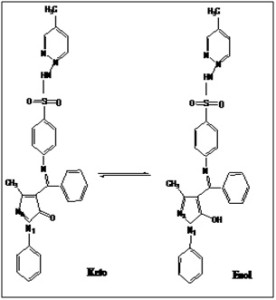 FIGURE 5: KETO- ENOL FORM OF SCHIFF BASE LIGAND OF SULFAMERAZINE AND BMPHP (L2)

The ligands show a sharp and strong band due to u(C=N) of azomethine group at 1598-1600cm-1. The observed low energy shift of this band in the complex suggests the coordination of azomethine nitrogen22 in all the complexes.

The u(C=H) (cyclic) arising pyrazolone skeleton and sulpha drug skeleton in the ligand appear at ~1590 (merged with azomethine nitrogen) and at 1620-1630 cm-1 respectively, do not show any change in their position in the IR spectra of complexes. The u(C=N2) appears to be merged with u(C=N) azomethine group. These observations indicate the non-participation of the respective cyclic nitrogenin the coordination. The coordination of ring nitrogen23 N1 is unlikely due to sterric demand of the bulky phenyl group attached with it.

The IR spectra of the two ligands exhibit two strong bands at 1325-1360 cm-1 and 1105-1145 cm1, which are attributed respectively, to asymmetric and symmetric stretching vibration of SO2 group. The bands are observed at the same position in the complexes (Figure 6 and 7) indicating its non- coordination to the metal center. 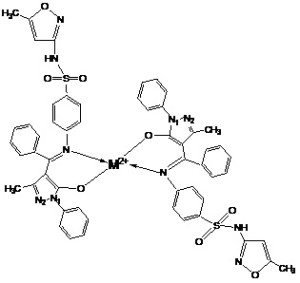 FIGURE 6: COMPLEX OF Zn2+ AND Co2+ WITH SCHIFF BASE LIGAND L1 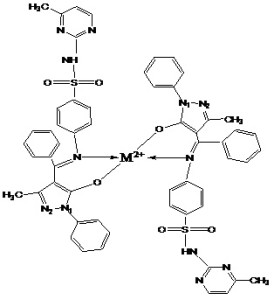 FIGURE 7: COMPLEX OF Zn2+ AND Co2+ WITH SCHIFF BASE LIGAND L2

TABLE 1: ANTIBACTERIAL ACTIVITIES OF L1 AND ITS COMPLEXES

The complexes of L1 (Table 1) have enhanced activity compared to the ligand. Complex of cobalt was found to be a broad range compound and it inhibited the growth of all the tested organisms. Zinc complex was also found be very potent, inhibiting the growth of nearly all organisms.

TABLE  2: ANTIBACTERIAL ACTIVITIES OF L2 AND ITS COMPLEXES

A comparative study of the two ligands was done, L1 was found to be more effective and of broad range than L2. 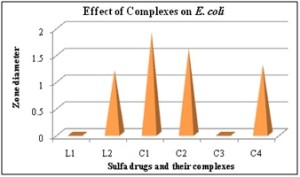 FIGURE 8: EFFECT OF COMPLEXES ON E.COLI 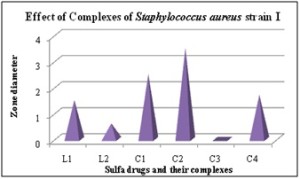 FIGURE 9: EFFECT OF COMPLEXES ON STAPHYLOCOCCUS AUREUS STRAIN I 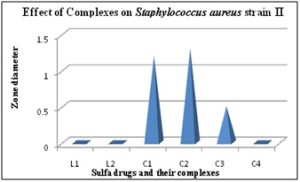 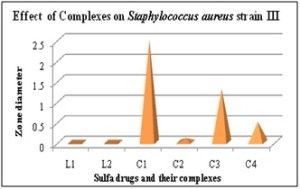 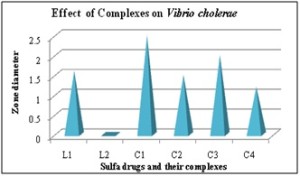 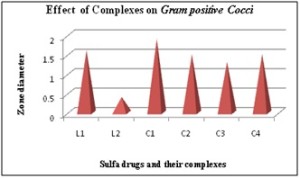 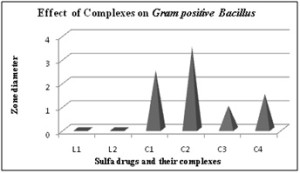 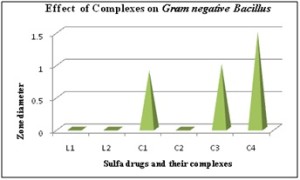 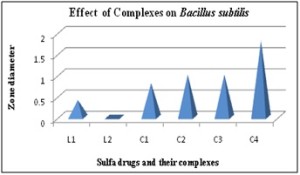 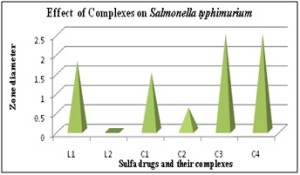 CONCLUSION: In this report, the synthesis of a Schiff base ligand obtained from the reaction ofsulfamethoxazole L1/ sulfamerazine L2with bmphp has been described. Co (II) and Zn (II) complexes have been synthesized using the Schiff base ligand and characterized by IR spectral data.Based on the IR data the azomethine-N and pyrazoline- O has been found to be the coordination sites. These metal complexes have been found to have higher antimicrobial activity than the corresponding ligands.

ACKNOWLEDGEMENT: We are grateful to the University Grants Commission for the financial support extended in this endeavor. We are thankful to Dr. Fr. Vazhan G. Arazu, Principal, St. Aloysius’ College for all the help and cooperation extended to us in the completion of the project as we could always count on him for each of our need related to the project. We are deeply indebted to Dr. Fr. Davis George, Ex-Principal, St. Aloysius’ College, for being a source of inspiration and the guiding force behind this effort. We also extend our heartfelt thanks to Dr. Arti Kanojia and Dr. Debjani Sutradhar for their cooperation.