SYNTHESIS AND BIOLOGICAL EVALUATION OF CHALCONES FROM 2-ACETYL-5-METHYLFURAN

SYNTHESIS AND BIOLOGICAL EVALUATION OF CHALCONES FROM 2-ACETYL-5-METHYLFURAN

Chalcones on heating with traces of iodine in dimethyl sulphoxide (DMSO) for 2 hrs give the corresponding flavones. Chalcones were converted to the corresponding flavonols by their oxidation using hydrogen peroxide in methanolic sodium hydroxide solution and these flavonols showed characteristic greenish yellow fluorescence in ethanolic solution as well as with concentrated sulphuric acid 3.

General methods of Synthesis: The chalcones are important intermediates in the synthesis of pyrazoles, isoxazoles and pyrimidines. They can be obtained by the acid or base catalyzed aldol condensation of 2-hydroxyacetophenones with benzaldehydes 4-6. For example 2-hydroxyacetophenone and benzaldehyde react in the presence of 0.1M NaOH to give the chalcone 7. The synthetic reaction was illustrated as Scheme 1.

Cinnamic acid condenses with resorcinol in chloroform in the presence of boron trifluoride to yield the chalcone 7. This reaction procedure for synthesis of chalcone was illustrated as Scheme 2.

The oxygenated chalcones usually possess U.V absorption maxima in the range 340-390 nm and chalcones lacking B-ring oxygenation may have their absorption at considerably shorter wavelengths and a minor peak usually appears in the range 220-270 nm 8. The infrared spectra of chalcones show usually a band near 1625-1650 cm-1, characteristic of an α, β-unsaturated carbonyl group 9.

In the collision-induced dissociation (CID), mass spectra of the protonated chalcones reveals loss of benzene from the two ends and elimination of a styrene as the major fragmentation reactions. This fragmentation procedure was clearly illustrated as Scheme 3 11. 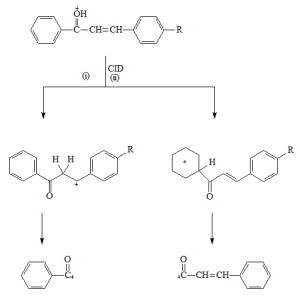 Chalcones also give rise to the unusual fragment ion [M-H]+ in its electron impact mass spectrum. This type of fragmentation is sometimes known as a proximity effect and also occurs in the fragmentation of several categories of ionized heterocycles.

This usually involves the elimination of an ortho substituent from an aromatic ring with further cyclization (Scheme 4) to give a highly stabilized cation by means of an intramolecular aromatic substitution reaction and this is well documented and reviewed by Grutzmacher 15.

Three important fragment ions from protonated chalcone arise due to loss of H2O, CO and benzene, all of which require rearrangements (Scheme 5). 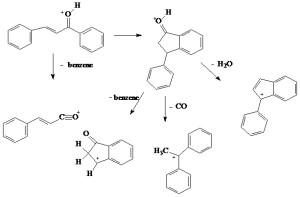 MATERIALS AND METHODS: A brief description of the solvents, chemicals procured, the instruments and the conditions employed for the characterization of the synthesized compounds are presented here.

The organic solvents such as methanol, acetone, chloroform and ethyl acetate were of spectral grade and used as such without further purification. Anhydrous methanol was obtained by fractional distillation and storing over type 4A molecular sieves.

The acetone present in methanol was removed by using the following procedure. A mixture of 500 ml of methanol, 25ml of furfural and 60 ml of 10% sodium hydroxide solution was refluxed for 12 hrs, then the mixture was distilled and the first few millilitres  of the distillate was rejected as it contains trace amount of formaldehyde.

Ethanol obtained by distillation of commercial ethyl alcohol was refluxed over ignited calcium oxide for 6 hours and distilled at atmospheric pressure and then used. Some of the solvents were purchased from the local manufacturers and S.D Fine Chem. Ltd, Mumbai, India.

All the chemicals used in the synthesis were obtained from standard commercial sources. 2-acetyl-5-methylfuran was purchased from Aldrich Chemical Co. (Melwaukee, Wisconsin, USA).

Fractions each of 100 ml were collected. The separation of the compounds was checked on TLC under UV lamp and also by spraying the plates with 10 % sulphuric acid.

The 13C NMR spectra of the compounds were recorded on Bruker AMX 400 MHz NMR spectrophotometer using TMS as an internal standard and the values are expressed in δ ppm.

The mass spectra of the compounds were recorded either on Agilent 1100 ESI-Mass (Turbo Spray) Spectrophotometer using positive mode ionization method. Elemental analyses were carried out with a Perkin-Elmer model 2400 series II apparatus. The results of elemental analyses (C, H and N) were within ± 0.4 % of the calculated values.

Procedure for Synthesis of chalcones of 2-Acetyl-5-methylfuran: A mixture of 2-acetyl-5-methylfuran (0.001mol) and the appropriate aryl aldehyde (0.001 mol) was stirred in ethanol (7.5 ml) and to it aqueous solution of KOH (50 %, 7.5 ml) was added. The mixture was kept for 24 hrs and it was acidified with 1:1 mixture of hydrochloric acid and water, then it was filtered under vacuum and the product was washed with water. This procedure was clearly illustrated in the following Scheme 6.

By adopting the above the synthetic procedure, compounds (B1 to B25) were also synthesized. List of new chalcones synthesized is show in Table 1.

All these compounds are new and the physical characterization, elemental analysis, IR and 1H NMR spectral data was presented separately in detail from Table 2 - 5 respectively.

Antibacterial activity: Chalcones are proved anti-microbial agents 14 and antibacterial activity of the synthesized chalcones (B1 to B25) was assessed by determining the MIC, which is defined as the lowest concentration of the compound that completely inhibited the growth of each strain after overnight incubation. MIC values can be determined by a number of standard test procedures. The most commonly employed methods are the tube dilution and agar dilution methods 15.

Procedure: The test bacteria grown at 37oC in nutrient agar medium were diluted in sterile nutrient broth medium in such a manner that the suspension contains about 107cells/mL. This suspension was used as the inoculum.

Serial broth dilution procedure was adopted to determine MIC of the synthesized Chalcones.

11 test tubes were taken, 9 of which were marked 1, 2, 3, 4, 5, 6, 7, 8, 9 and the rest two were assigned as TM (medium), and TMI (medium + inoculum).1 mL of nutrient broth medium was poured into each of the 11 test tubes.These test tubes were cotton plugged and sterilized in an autoclave at 15 lbs/sq.inch pressure.After cooling, 1 mL of the sample solution was added to the first test tube and mixed well and then followed by serial dilution method. 10 μL of the inoculum was added to the test tube TMI to observe the growth of the organism in the medium used.The controlled test tube TM containing only the medium was used to confirm the sterility of the medium.All the test tubes were incubated at 37oC for 18 hrs.

Antibacterial activity: From the above results it is evident that all the chalcones synthesized, showed antibacterial activity with different MIC values against the tested organisms, but not comparable with that of the standard. Among the compounds tested, B5 with difluorophenyl moiety was found to be the most potent against B. subtilis, E. coli and P. vulgaris having a MIC value of 32 µg/mL in each case.

The chalcones, B6 having a dichlorophenyl substitution, B7 having 2-chloro-5-nitrophenyl substitution and B15 having bromofuran substitution were also found to be equipotent with a MIC value of 32 µg/mL against E. coli, B. subtilis and E. coli respectively. Some of the chalcones with mono halogen substitution (B2, B3 and B4) on the phenyl ring showed a MIC of 64 µg/mL against both Gram-positive and Gram-negative bacteria. The chalcones B12 with trimethoxyphenyl moiety also showed similar MIC values. All the other chalcones were also found to be somewhat potent against selective organisms with a MIC of 64 µg/mL, but most of them showed a MIC value in between 128-256 µg/mL.

The structure-activity relationship study based on the above results clearly indicated the importance of electron withdrawing groups in enhancing the antibacterial activity. When more than one such group present on the phenyl ring, a cumulative effect was observed as seen in the case of B5 and B6 having difluoro and dichloro substitution respectively. However, compounds with electron releasing substituents as seen in the case of B12 and B16 also enhanced the activity. Compounds with more number of electron releasing or electron with drawing substituents on the aromatic or heteroaromatic ring at different positions can be synthesized to draw meaningful conclusions with respect to the influence of electronic effects on the antimicrobial activity was show in Graph 1.

GRAPH 1: ANTIBACTERIAL ACTIVITY OF CHALCONES (B1 TO B25)

The chalcones B6, B7, B15, B19, B22 and B24 carrying different electron withdrawing or electron releasing substituents also enhanced the antifungal activity. The other compounds also found to be somewhat potent with MIC values ranging from 64-256 µg/mL was show in Graph 2.

GRAPH 2: ANTIFUNGAL ACTIVITY OF CHALCONES (B1 TO B25)

A Structure-Activity-Relationship study based on the above results indicated the necessity of fluorine at different positions of the phenyl ring. Since the fluorine substitution has contributed favorably to the inhibitory activity, a chalcone with two or more such substituents on the aromatic ring at different positions can be synthesized with a hope to get promising antifungal compounds. Compound having the phenyl ring substituted with three methoxyls at 3, 4 and 5 positions has also enhanced the activity.

Compounds having this type of substitution at other positions can be attempted as part of SAR studies and similarly chalcones with different substituents on furan moiety can also be synthesized in order to enhance the activity.

CONCLUSION: The results also indicated the contribution of α, β-unsaturated carbonyl group present in chalcones in enhancing the activity, as this structural feature was distinctive for the chalcones synthesized. Influence of the same reactive group for probable anti-microbial activity of chalcones must be investigated further in detail. However, the change in the resulting physico-chemical properties, need to be established by proper QSAR studies in each case.

ACKNOWLEDGEMENT: I, Pavan Kumar Padarthi would like to express our gratitude to all those who gave us the possibility to complete this report.We are deeply indebted to Dr. Reddy Rambabu of Chebrolu Hanumaiah Institute of Pharmaceutical Sciences, Guntur and Prof. Y. Rajendra Prasad of Andhra University, Visakahapatnam, for stimulating suggestions, knowledge, experience and encouragement helped us in all the times of study and analysis of the project.