SYNTHESIS AND BIOLOGICAL SIGNIFICANCE OF PYRAZOLONES: A REVIEW

SYNTHESIS AND BIOLOGICAL SIGNIFICANCE OF PYRAZOLONES: A REVIEW

ABSTRACT: Heterocyclic compounds are acquiring more importance in recent years because of their pharmacological activities. Pyrazolones have a particular value due to their broad spectrum of biological activity and their wide ranging utility as synthetic tools in the design of various bioactive molecules. Pyrazolone is a five membered lactum ring, containing two nitrogen and one ketonic group in its structure. In addition, pyrazolones possess antimicrobial, antifungal, antimycobacterial, antibacterial, anti-inflammatory, antitumor, gastric secretion stimulatory, antidepressant and antifilarial activities. They also serve as precursors for dyes, pigments, pesticides and chelating agents, besides finding applications in the extraction and separation of various metal ions. The high therapeutic properties of the pyrazolone releted drugs have encouraged the medicinal chemists to synthesized a large number of novel chemotherapeutic agents. Numerous methods for the synthesis of pyrazolone and also their various structure reactions offer enormous scope in the field of medicinal chemistry. This articles aims to review the work reported, their chemistry and biological activities of pyrazolone during past years.

INTRODUCTION: Since last two decades a rapid progress in synthetic organic chemistry is associated with a search for new compounds with desired properties. Such compounds are widely used in pharmaceutical industries. Among these, the heterocycles form the largest of the classical division of organic chemistry and are of immense biological and industrial importance. The majority of biologically active compounds are heterocycles also applicative as additives and modifiers used in industries of cosmetics, photography, information storage and plastics. Heterocyclic compounds are also used in pharmacy and agriculture.

Analysis of scientific papers in the last two decades revealed that there is a general trend in research for new drugs involving modification of existing biologically active matrices and molecular design of the structures of compounds.

In the recent years much attention has been focused on the synthesis of heterocycles containing nitrogen atom because of their biological and medicinal importance including ontological research. They are widely distributed in nature and are essential for life. Pyrazolones is a five member heterocyclic compound containing one ketonic group and two nitrogen atoms adjacent to each other. In 1883, Knorr et al 1 gave the generic name pyrazole to above class of the compounds, which is a five member unsaturated ring compound with two adjacent nitrogen atoms. Antipyrine was the first pyrazolone derivative for clinical use and was synthesized in 1883 2. It was used as the first agent to reduce fever and also for arthritis. There are three possible heteropyrazolines [1, 2, 3] in which carbonyl group is adjacent to nitrogen.

The carbonyl at position five leads to 5-hydroxyl pyrazoles [4], since the 5-hydroxy compound exhibits pronounced enol character, tautomeric forms shown below for the 1-phenylderivative are the fundamental structures involved in the pyrazolone reactions.

Pyrazolone derivatives are an important class of heterocyclic compounds that occur in many drugs and synthetic products 3, 4. These compounds exhibit remarkable analgesic 5, antitubercular 6, antifungal, antibacterial 7, anti-inflammatory 8, antioxidant and antitumor activities 9. Due to their easier preparation and rich biological activity, pyrazolone framework plays an essential role and represents an interesting template for combinatorial and medicinal chemistry.

Due to its diverse pharmacological properties, the chemistry of pyrazolones is gaining attention, and there have been numerous novel methodologies reported recently 17. We describe here in our research findings in this area.

Sujatha et al. 18 have been reported the preparation of 4,4’-(arylmethylene) bis (1H-pyrazol-5-ols) 3 has been accomplished by tandem Knoevenagel–Michael reaction of two equivalents of 5-methyl-2-phenyl-2,4-dihydro-3H-pyrazol-3-one 1 with various aromatic aldehydes 2 catalyzed by ceric ammonium nitrate (CAN) in water.

Liu et al.19 have been reported a novel solid-state reversible fluorescence photo switching system (FPS) based on photochromism of photochromic pyrazolones has been developed by employing phosphor Sr2P2O7 co-doped with europium ion and chlorine ion (Sr2P2O7–EC). (3-chlorophenyl)(5-hydroxy-1,3-diphenyl-1H-pyrazol-4-yl)methanone 4 react with N-phenyl hydrazinecarboxamide 5 to form 1,3-diphenyl-4-(3-chlorobenzal)-5-hydroxypyrazole-4-phenylsemi carbazone 6 as the fluorescence dye and the photochromic compound, respectively.

Baciu-Atudosie et al.20 have been reported a simple one-pot approach for the synthesis of new 5-substituted-2-[2-(2-substituted-10H-phenothiazin-10-yl)-2-oxoethyl]-2,4-dihydro-3H-pyrazol-3-one 10 containing a phenothiazine unit by reaction of N-chloroacetyl compound 7, ethyl acetoacetate 9 with hydrazine hydrate 8. 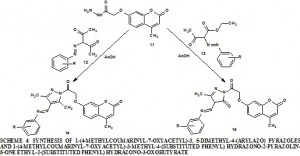 Gunasekaran et al.22 have been reported a series of 2-aryl-5-methyl-2,3-dihydro-1H-3-pyrazolones 20 has been synthesized by one-pot, four-component sequential reactions of phenyl hydrazine 16, methyl acetoacetate 17, β-naphthol 18 and aromatic aldehydes 19 in the presence of p-toluenesulphonic acid in water in good yields. 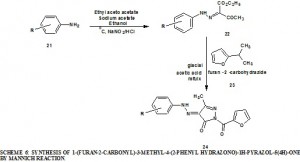 Mosaddegh et al. 24 heve been reported the synthesis of 4,4’-(arylmethylene)bis(3-methyl-1-phenyl-1H-pyrazol-5-ol) 27 was performed effectively by the reaction of aryl aldehydes 26 and 1-phenyl-3-methyl-5-pyrazolone 25 in the presence of a catalytic amount of Ce(SO4)2.4H2O as reusable and environmentally friendly catalyst in water/ethanol solution. The method has the advantages of high yields, short reaction time, simple work-up and reusability of catalyst.

Ragavan et al. 26 have been reported Oxy/thio substituted-β-keto esters were synthesized through an efficient cross-Claisen condensation of aryl oxy/thio acetic acid ethyl esters 33 with acid chlorides 34, they form a intermediate 35 then it is converted  into 4-oxy/thio substituted-1H-pyrazol-5(4H)-ones 36 by the addition of hydrazine or hydrazine derivatives.

Bran et al. 28 have been reported a series of bisindolylpyrazolone 40, 41 derivatives by the reaction of substituted β-ketoester 39, comphoric acid and ethylaminoethylhydrazine in ethanol medium.

Burja et al. 29 have been reported a series of pyrazolone-fused combretastatins 49 and their precursors were synthesized by multicomponant reaction method which were completed in multisteps. At the last step methanolic solution of NaOH was added to a stirred mixture of 48 in CH2Cl2/MeOH at room temperature. 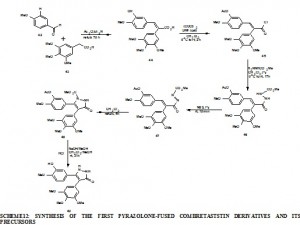 SCHEME12: SYNTHESIS OF THE FIRST PYRAZOLONE-FUSED COMBRETASTSTIN DERIVATIVES AND ITS PRECURSORS

Shamsuzzaman et al. 30 have been reported a convenient synthesis of a new series of nano steroidal pyrazolones 51, Cyanoacetohydrazide was added in an equimolar ratio to a solution of steroidal ketones 50 in acetic acid. The reaction mixture was stirred under refluxing for 7 h.

Laufersweiler et al. 31 have been reported novel substituted [5,5]-bicyclic pyrazolones 56 were prepared in multisteps. Reaction start with t-Boc and benzyl carbazate 52 to gave keton. Ketone 53 react with borane dimethylsulfide and gave a intermediate 54, after that hydrogenolysis followed by acylation with 2-methylsulfanyl- pyrimidine-4-carbonyl chloride gave bis-acylated pyrazolidine 55. Ring closure proceeded an intramolecular cyclocondensation to form the pyrazolone. This was followed by oxidation of the methyl sulfide and subsequent displacement with an appropriate nucleophile to give the final compounds 56. 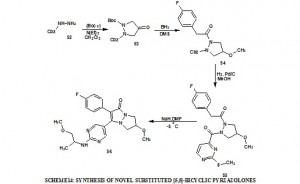 Tripathy et al. 32 have been reported the synthesis of the unsubstituted pyrazolone 61, accomplished by the reaction of β-ketoester 57 react with semicarbazone which were followed by rearrangement to 1,2,3-thiadiazole in presence of thionyl chloride to gave 1,2,3-thiadiazole 5-carboxylic acid ethyl ester 60.  Subsequent β-ketoester formation followed by cyclization with hydrazine resulted in the pyrazolone 61. Similar condensation with indole carboxaldehydes resulted in product 62.

Huang et al.33 have been reported an efficient and convenient method for the bromination of pyrazolones 65 and 5-hydroxypyrazoles 66 were developed 1,3-ketoester 63 and hydrazines 64 were added glacial acetic acid by using N-bromobenzamide 67  in THF at room temperature. This new method provided di-bromimated pyrazolones in excellent yields. 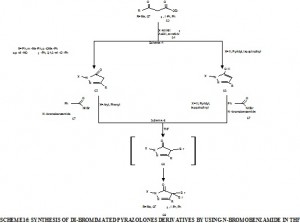 Kadam et al. 34 have been repoted a novel synthesis of 3-amino-4-(4I-substituted benzylidene) - 1H-pyrazol-5(4H)-one derivatives 72 and 3-amino-4-(4I-substitued benzylidene) - 4, 5 - dihydro-5-oxopyrazole-1-carbothioamide derivatives 73 by the reaction of substituted benzaldehyde/ heteroaldehyde 70, ethylcyano acetate 71 and thiosemicarbazide was heated in presence of PEG-400.

Mehta et al. 35have been reported the synthesis of diphenylic bispyrazole 76, 77 and diphenylic bispyrazolone compounds 79, 80. According to the method reported in the literature36, these derivatives have been synthesized by the reaction of 4,4'-sustituted dianiline 74 react with acetylacetone and ethylacetoacetate.

Compound 75 and 78 were reacted with hydrazine hydrate or phenyl hydrazine in CH3COOH. The reaction mixture was then allowed to reflux for 2 h or 6 h respectively with continuous stirring. After refluxing, it was allowed to cool at room temperature. The yellowish product obtained, was filtered and recrystallized using acetone. 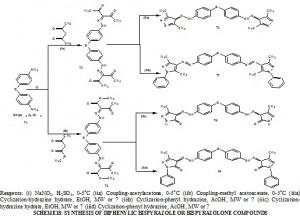 Sivakumar et al. 39 have been reported an efficient synthesis of some Mannich base of 5-methyl-2-[(2-oxo-2H-chromen-3-yl) carbonyl]-2,4-dihydro-3H-pyrazol-3-one 95 have been described by using multicomponant with microwave techniques. Microwave assisted reactions showed that require shorter reaction time and good yield. 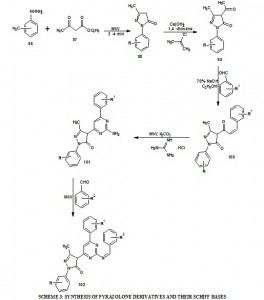 SCHEME 3: SYNTHESIS OF PYRAZOLONE DERIVATIVES AND THEIR SCHIFF BASES

Zang et al. 41 have been reported the synthesis of 4-[(5-hydroxy-3-methyl-1-phenyl-1H-pyrazol-4-yl)-phenyl-methyl] – 5 – methyl – 2 - phen-yl-1,2-dihydro-pyrazol-3-ones 106 through the condensation reaction of arylaldehydes 103 and 3-methyl-1-phenyl-5-pyrazolone 104 with Ionic liquid [HMIM]HSO4 catalyst 105 under ultrasonic irradiation at room temperature. The present methodology offers several advantages such as excellent yields, simple procedure and mild conditions.

Ziarati et al. 42 have been reported simple and green process to prepare copper iodide in nano scale via sonication was carried out. Subsequently, this nanoparticles was used as an efficient catalyst for the synthesis of 2-aryl-5-methyl-2,3-dihydro-1H-3-pyrazolones 111 via four-component reaction of hydrazine 107, ethyl acetoacetate 108, aldehyde 109 and β-naphthol 110 in water under ultrasound irradiation.

Gadhave et al. 43 have been reported a series of novel fluorine containing pyrazole-pyrazolone 118 and chromone-pyrazolone 116 was synthesized from multifluorinated pyrazolone by the Knoevenagel condensation reaction. All compounds were synthesized by conventional heating as well as ultrasound irradiation technique. It was found that ultrasonication method was more efficient than conventional heating method. 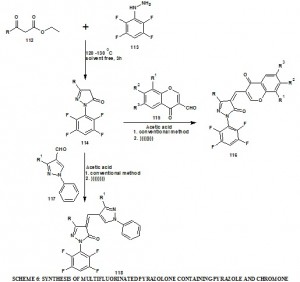 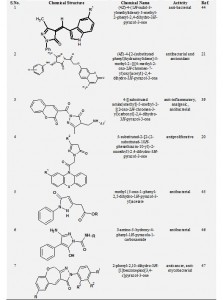 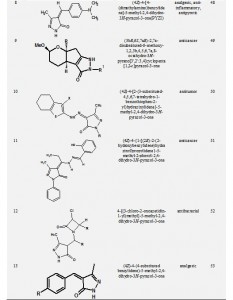 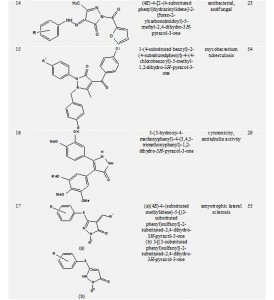 CONCLUSION: On the basis of literature survey, pyrazolone derivatives exhibits antimicrobial, anti-inflammatory, analgesic, anticancer and antitubercular activities. This review gives an overview of various synthetic routes used to form a biologically rich pyrazolone moiety. The possible improvements in the activity can be further achieved by slight modifications in the substituents on the basic pyrazolone nucleus. This article proves to be helful for further research work on the bioactive pyrazolone ring and as an important tool for the development of better medicinal agents.

ACKNOWLEDGEMENT: We are grateful are due to the Head, School of studies in Chemistry and Central Library of Jiwaji University, Gwalior, India for providing necessary facility and support of this work.