SYNTHESIS AND CHARACTERISATION OF CHALCONE BASED COPOLYESTERS AND THEIR ANTICANCER ACTIVITY

SYNTHESIS AND CHARACTERISATION OF CHALCONE BASED COPOLYESTERS AND THEIR ANTICANCER ACTIVITY

ABSTRACT: Breast cancer is one of the most common causes of death in women. Chalcone exhibit chemopreventive and antitumor effects.  As  a part of proactive  approach  in the fight against  breast cancer, two  copolyesters using varying  chalcone  diols  as monomer and varying  aliphatic  and  aromatic  acid  chlorides were synthesised by solution  polycondensation  method. The two copolyesters were characterized by solubility and viscosity measurements. The structure of the copolyesters was established by FT-IR, 1H NMR, 13C NMR and MALDI. The monomer  and  copolyesters  were  studied for their anticancer activity using MCF-7 Cell Line and  their  cytotoxic  effect were  studied on VERO Cell Line  by MTT assay. The IC50 values were calculated using the Software Graph Pad Prism Version 7 and ED50 plus v 1.0. The Selectivity index indicates that the chalcone HHEP and the two copolyesters are good anticancer agents and the chalcone MHEP is cytotoxic. The Selectivity index were found to be more than two, these copolyesters can be targeted individually or in combination with cancer drug in chemotherapy.

INTRODUCTION: Cancer refers to any malignant growth or tumor caused by abnormal and uncontrolled cell division. Breast cancer is one of the most common cancers in women. Death from cancer worldwide are projected to continue rising, with an estimated 131 millon death in 2030. Chalcones are a class of natural compounds that widely exist in a variety of plant species. They are commonly known as yellow pigments in flowers and are also widely distributed in various parts (roots, rhizomes, heartwood, leaves, flowers and seeds) 1. Chalcone derivative have shown anti-cancer, antimalarial, anti-inflammatory 2, anti-bacterial, anti-filarial, antifungal and anti-oxidant activity 3. Concerning the chemical structural level, these compounds are open-chained molecules, in which the two aromatic rings are joined by a three-carbon α, β- unsaturated carbonyl system (1,3-diphenyl-2-prop-1-one).

A large number of chemical structures have been studied, and it was reported that hydroxyl-derivatives of chalcones display marked anti-proliferative effects on cancer cells. These groups are likely necessary for the chemotherapy agents 4.  The principal aim of our work is the discovery of novel cytotoxic and anticancer agents. In the present study, we have synthesized two chalcone diols by acid catalysed claisen condensation method. Using those chalcone as monomers and varying acid dichlorides two copolyesters were synthesied to study their enhanced biological activity 5, 6, 7. The newly synthesized chalcone diols and polyesters are further screened for their anticancer activity.

Synthesis of HHEP: Dry HCl gas (generated  as  a result  of  reaction  between concentrated  sulphuric  acid  and dry  crystals  of  NaCl) was passed through a well cooled solution of 3g of 4- hydroxy -3- ethoxy benzaldehyde and 2.7g of 4 -hydroxy acetophenone in 100 ml of absolute ethanol taken in a 250 ml RB flask under stirring conditions. The precipitate is poured into ice cold distilled water and allowed to settle, filtered, dried and recrytallised from methanol.

Same method was adopted to synthesise MHEP and both were reported 8.

Synthesis of PIOH: Taken 1g of HHEP in 100 ml RB flask. Added 10 ml of dry DMF stirred till it is dissolved, then added 0.3573 g of isophthaloyl chloride and 0.1586 g of oxalyl chloride, temperature was raised to 120 °C and  maintained at 120 °C. Left the reaction to proceed for 12 h. After the reaction time, quenched in 50 ml of n-hexane, filtered, dried, powered. It is then reprecipitated from methanol. 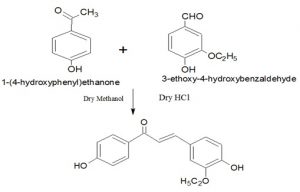 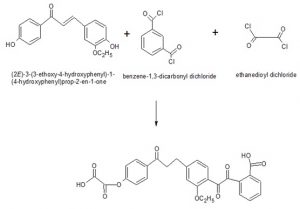 Same method was adopted to synthesise PIOM and both were reported 8. The structure of the copoly- esters was established by FT-IR, 1H NMR, 13C NMR and MALDI.  Table 1 gives information regarding  the monomers  used  in  the  synthesis  of  the  two  copolyesters,  their  respective  copolyester code, percentage of yield and inherent viscosities.

Cytotoxic Studies: The anticancer activity of samples on MCF-7 cells were determined by the MTT assay cells (1x10⁵/well) were plated in 0.2 ml of medium/well in 96-well plates. Incubate at 5% CO₂ incubator for 72 h. Then, add concentrations of the samples in 0.1% DMSO for 48 h at 5% CO₂ incubator. After removal of the sample solution and washing with phosphate-buffered saline (pH 7.4), 20µl/well (5mg/ml) of 3-(4,5dimethyl-2-thiazolyl)-2,5-diphenyl-tetrazolium bromide (MTT) in phosphate-buffered saline solution was added.  After 4 h incubation, 1 ml of DMSO was added.

Viable cells were determined by the absorbance at 540nm. Measurements were performed and the concentration required for a 50% inhibition of viability (IC50) was determined graphically. The effect of the samples on the proliferation of MCF-7 cells was expressed as the % cell viability, using the following formula:

Using the Graph Pad Prism, the IC50 values are calculated and compared with ED50 plus v 1.0. From this Selectivity index was found using the following formula:

RESULTS AND DISCUSSION: The two synthesized chalocone based copolyesters were characterized by viscosity measurement, solubility study and spectroscopic methods FT-IR, 1H and 13C NMR and MALDI. Cytotoxic study was carried out using MTT assay. Solubility of the two copolyesters was determined in various solvents and reported 8. The outcome reveals  that  they are found  to be  highly  polar solvents, partially  soluble  in moderately  polar  solvents but  absolutely  insoluble  in  least  polar  solvents. The  inherent  viscosity  value  of  the  two   copolyesters PIOH, PIOM was determined in  DMAc solution  at 30 °C using Ubbelohde Viscometer  and  were  found  to  be  1.0189 and 1.0632 dL/g  respectively as  presented  in  Table 1   reveals  that these  copoly-esters  have high  molecular  weight . 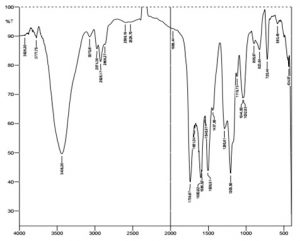 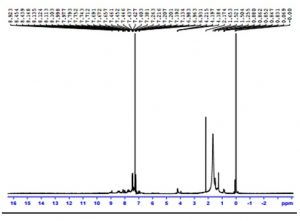 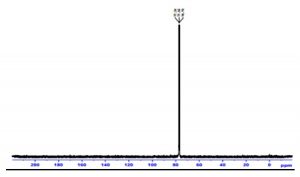 In-vitro Cytotoxic Effect of Chalcones: Anticancer  activity  of chalcone  might be  due  to  molecular  alteration  such  as  induction  of  apoptosis, DNA and mitochondrial damage, inhibition of angiogenesis, tubulinn inhibition, kinases inhibition and also drug efflux protein activities 9. Aromatic  chalcones  with  hydroxyl  group,  methoxy group  on  A ring  at  position 2 or 3 are considered as lead compounds for  generation of  new potential  anticancer drugs 10. When  the  two  monomers  are compared  for their anticancer activities, the chalcone diol  HHEP   was  found  to be  good  anticancer agent and MHEP as cytotoxic  effect. When the two copolyesters  are  compared  for  their  anticancer  activities  both are found to be good anticancer  agents  because the  aromatic  ring  has  substituent  alkoxy   groups  at the chalcone backbone. 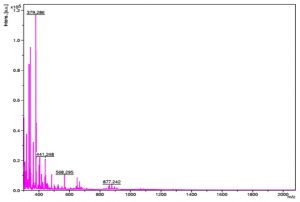 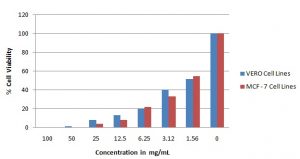 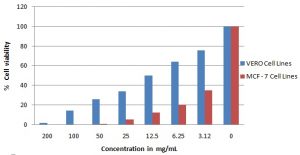 Literature survey indicates  that when the selectivity index  is  greater  than two for a  material  under investigation  it  can  be  good  anticancer agents 11. The Selectivity index of the monomer HHEP and the copolyesters PIOH and PIOM are found to be more than two. Hence they can be targeted at the Breast Cancer Cell Lines as good anticancer agents.

CONCULSION: Two chalcone (HHEP and MHEP) were synthesized and characterized. These chalcone as monomers diols were used and two copolyesters were synthesized using different diacid chloride namely oxalyl chloride and isophthaloyl chloride by polycondensation method. These are   characterized   and evaluated for their anticancer activity.  The  selectivity  index  reveals that  one  of  the  monomer (HHEP)  and  two copolyesters  are  potent  anticancer  agents. Hence they can be used as a anticancer agents. This study can be further extended on drug conjugates targeting MCF-7 Cell Line.