The complexes of manganese(II) with sulphur containing ligands play an excellent role in catalytic property 3, 4. Manganese and its compounds are widely used in analytical chemistry, metallurgical processes, paints and pigment industry.

Experimental procedure: All reagents and chemicals used were of Anala R grade. All solvents used were of standard/spectroscopic grade.

Preparation of Ligand: Ligand L1 and L3 were  prepared by adding hot ethanolic solution (20 mL) of 2-formyl pyridine/5-methyl-2-formyl pyridine ( 0.02 mol) to a hot aqueous solution of semicarbazide hydrochloride and 0.02 g sodium acetate. Mixture was refluxed on water bath for an hour at around 80°C. On cooling at »0 °C compounds were  precipitated out. They were filtered and washed with hot water and dried over P4O10.

Ligand L2 and L4 were synthesised by refluxing the mixture of thiosemicarbazide (0.02 mol) and 2-formyl pyridine (0.02 mol)/5-methyl-2-formyl pyridine in a round bottom flask at around 80 °C till clear solution is obtained. Ligand was precipitated out on cooling at 0 °C. It was filtered and washed with ethanol.

Preparation of Manganese (II) Complexes with ligands L1 to L4: The complexes were prepared by using semicarbazide and thiosemicarbazide based ligands and corresponding Mn(II) salts (MnCl2.4H2O and Mn(NO3)2.H2O). A hot ethanolic (20 mL) solution of corresponding metal salts (0.001mol) was mixed with hot ehtanolic solution of the ligands L1 to L4 (0.002 mol). The mixture was refluxed for 3-4 h at 80°C (±5). The completion of the reaction was confirmed by Thin Layer Chromatography. On cooling the contents, coloured complexes were precipitated out. These were filtered, washed with 50% ethanol and dried in vacuum over P4O10. Purity of the complexes were checked by Thin Layer Chromatography.

Instrumentation: Carbon (C), Hydrogen (H) and Nitrogen (N) were analysed on a carlo-Erba 1106 elemental analyser. Molar conductance was measured on the ELICO (CM82T) conductivity bridge. Magnetic susceptibility was measured at room temperature on a Gony balance using CuSO4.5H2O as calibrant 1HNMR spectra was recorded at room temperature on a Bruker Advance DPX-300 spectrometer using DMSO-d6 as a solvent. IR spectra (KBr) were recorded in DMSO on a shimadza UV mini-1240 spectrophotometer. EPR spectra were recorded as polycrystalline samples and in a DMSO solution at liquid nitrogen temperature (LNT) and room temperature (RT) on an E4-EPR spectrometer using DPPH as a g-marker.

Characterization of ligands: The semicarbazide and thiosemicarbazide based ligands (L1–L4) have been characterized by elemental analysis, IR 20-26, UV, 1HNMR and mass spectral studies.

Characterization of metal complexes: The formation of the complexes can be represented by the reaction :

TABLE 2: IMPORTANT IR BANDS (cm–1) AND ASSIGNMENTS OF SEMICARBAZIDE AND THIOSEMCARBAZIDE BASED LIGANDS AND THEIR Mn(II) COMPLEXES 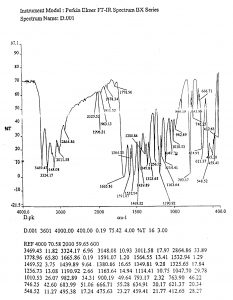 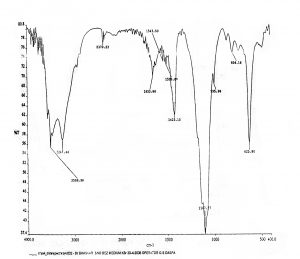 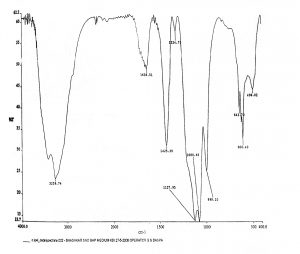 IR Spectral Bands due to Anions:

Magnetic Moment: The magnetic moment 27-30 of all the Mn(II) complexes under study at room temperature lies in the range of 5.91 – 6.05 B.M., corresponding to five unpaired electrons (Table 3). 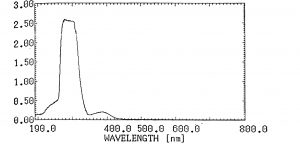 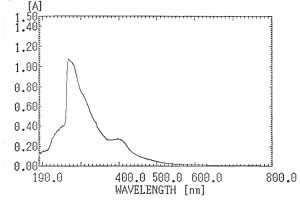 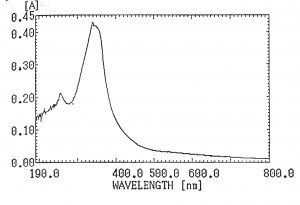 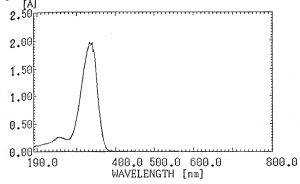 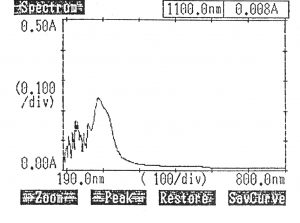 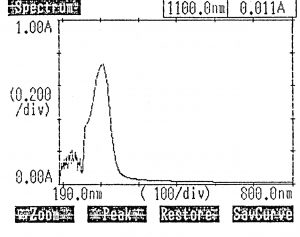 Ligand Field Parameters: The experimentally observed transition energies are used to calculate the values of parameters B, C, Dq and β. The best set of values for parameters B and C could be obtained by using transitions.

This is due to the fact that the energies of these two transitions are independent of the crystal field splitting energy and depends only on parameters B and C 53. The values for Dq could be evaluated with the help of the curve transition energy versus Dq, given by Orgel, using an energy level due to transition 6A1g ® 4T1g. The value of Dq parameter could not be obtained from 6A1g ® 4E1g 4A1g (4G) and 6A1g ® 4Eg (4D) transition because, they have almost zero or negative slope. These transitions are independent of the Dq value (Table 4).

The values of the parameters F2 and F4 are also listed in (Table 4). The electron-electron repulsion in the complexes is less than that in the free ion, resulting in an increased distance between electrons and thus an effective increase in the size of the orbitals. On increasing delocalization the value of b decreases and is less than 1 in the complexes. An estimate of b has been obtained from the nephelauxetic parameter for ligand (hx) and nephelauxetic parameters of the metal ion Km as (‘1-b) = hx X Km. The values of the parameter of the metal (hx) for the complexes have been calculated using the covalency contribution of Mn(II) ions i.e. Km = 0.07, while the B corresponds to 960 cm–1 for the free Mn(II) ions has been used to calculate the values of b. The calculated value of b and hx indicate that the complexes under study have appreciable ionic character.

CONCLUSION: On the basis of elemental analysis, molar conductance measurements, magnetic moment, IR, electronic, and the subsequent discussion given above the following structure may be proposed for all the complexes (Fig. 10 – 13). 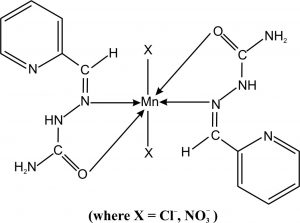 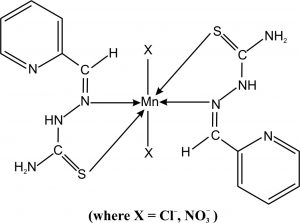 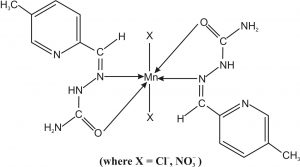 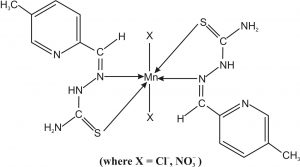