SYNTHESIS AND CHARACTERIZATION OF 6 – HYDROXY – 3, 4 -DIHYDROQUINOLINONE CILOSTAZOL IMPURITY-A AS PER INDIAN PHARMACOPOEIA

SYNTHESIS AND CHARACTERIZATION OF 6 - HYDROXY - 3, 4 -DIHYDROQUINOLINONE CILOSTAZOL IMPURITY-A AS PER INDIAN PHARMACOPOEIA

ABSTRACT: Impurity profile study is critical for getting market approval of finished dosage forms from regulatory authorities. There are many manufacturing firms (small and medium scale) in India that they cannot afford the high priced USP reference standards for analysis. So, the availability of cheaper affordable IP reference standards will help them adhere to quality guidelines for active pharmaceutical ingredients (APIs) and drug products and assure safe manufacturing system and marketing of pharmaceutical products. This research work is mainly envisaged towards increasing the list of Indian Pharmacopeia (IP) approved impurity reference standards. This paper describes our efforts towards the synthesis and process optimization of the synthesis of cilostazol impurity A. The objective of the present work was to develop a simple route of synthesis that gave a high purity product with good process efficiency. The synthesized cilostazol impurity A was characterized using sophisticated analytical techniques like Fourier-Transform Infrared spectroscopy (FTIR), Nuclear Magnetic Resonance (NMR) and Liquid Chromatography Mass spectrometry (LC-MS). The results indicated that cilostazol impurity A was obtained in a high purity form (>99.0%) using the developed synthetic process that could be scaled up and subsequently used for manufacturing of cilostazol impurity A reference standard.

INTRODUCTION: A clean bill of health of public” is the ultimate motto of pharmaceutical industries. The main aim of these industries is to secure public health by endorsing the patients to get correct medicine in perfect dose and efficacy at a reasonable cost. Hence, safety and efficacy become two crucial fundamental attributes of pharmaceuticals in drug remedial treatment.

The safety of a drug is not only dependent on the toxicological properties of the active drug substance but also on the impurities present in drug products 1.

Another side of the coin is that the formulation should be stable throughout the shelf life of the product with respect to its identity, strength, purity, and quality of the drug. In pharmaceutical industries, quality has to be monitored from the very beginning, i.e., from raw materials to the end, finished product, and during marketing survey. The drug should be safe, which indicates that it should give the acceptably low risk of adverse effects at its therapeutic doses 2.

Impurities in pharmaceuticals are unwanted chemicals that remain with the active pharma-ceutical ingredients (APIs) or develop during formulation or aging of both API and formulated APIs. The existence of these unwanted chemicals, even in minor quantities, may impact the efficacy and safety of the pharmaceutical products 3. As per the International Conference of Harmonization of Technical Requirements for Registration of Pharmaceuticals for Human use (ICH) guideline an impurity can be defined as any entity of the drug substance (bulk material) or drug product (final container product) that is not the chemical entity defined as the drug substance, an excipient, or other additives to the drug products. Therefore, synthesis, identification, quantification, and control of impurities in drug substance and drug product, are an important part of drug development and regulatory assessment 4. During the development stages, the chemistry and safety factors of impurities are a central focus of the quality concept. In the early stage of the drug development process, the level of impurities is usually higher and less experienced as well as information of it as there is greater variability in the synthetic process, mostly during optimization and scale-up process. Another important role of the synthesized impurities is its use as an impurity standard in the course of the final step of impurity profiling when the selective, quantitative method is developed for determining the impurity 5, 6. Impurity profile study is very critical for getting market approval of finished dosage forms from regulatory authorities 7. Hence forced degradation and impurity profiling are crucial steps for Investigational New Drug (IND) as well as New Drug Application (NDA) registration. There are many manufacturing firms (small and medium scale) in India that cannot afford the high-priced USP reference standards for analysis. So, the availability of cheaper affordable IP reference standards will help them adhere to quality guidelines for APIs and drug products and assure safe manufacturing systems and marketing of pharmaceutical products. This research work is envisaged towards increasing the list of IP-approved impurity reference standards.

The reagent 6-Hydroxy-3, 4-dihydro-2(1H)-quinolinone used in the synthesis of cilostazol is carried over to the final products (cilostazol) as trace level impurity, i.e., known to be cilostazol impurity A. Hence, the present work's objective is to synthesize cilostazol impurity a followed by its characterization using sophisticated analytical techniques like FT-IR, 1H and 13C NMR, LC-MS, and HPLC in order to confirm its identity, properties, and purity.

MATERIALS AND METHODS: All the reagents used were of LR grade and used without further purification. MW assisted synthesis was carried out on CEM Discover SP instrument at 60 °C; 60 psi at 60 Watt. For column chromatography, silica gel 60-120 mesh was used. The melting points were determined using Thiele tube and expressed in oC and are uncorrected. FT-IR spectra were recorded on Perkin-Elmer 1650 FT-IR spectrophotometer. A peak purity study was carried out using I. P 2018 procedure. HPLC analysis was carried out on Agilent 1200 series system. 1H and 13CNMR spectra were recorded on a 500 MHz Agilent-NMR, VNMRJ -Software (chemical shifts in 𝛿ppm) using tetramethylsilane (TMS) as an internal standard. LC-MS spectra were recorded on Agilent technologies 6520 Series accurate mass Q-TOF LC/MS system.

Conventional Synthesis: NaHCO3 (2.44 moles) was added to the mixture of p-anisidine (1.62 moles) 5 and toluene (3.75 moles) in a two-necked flask. A solution of 3-chloropropionyl chloride (1.63 moles) 6 in toluene (3.75 moles) was added slowly dropwise to the mixture, and the temperature of the reaction mixture was to rise to 50 °C. After this, the reaction mixture was stirred and heated to 60 °C for one hour.

The reaction mixture was cooled at room temperature, and dilute hydrochloric acid (3.26 moles) was added. After thirty minutes, the mixture was filtered, and the collected compound was washed with water, followed by toluene. The resulting product 7 was dried under a vacuum oven.

Microwave Synthesis: NaHCO3 (2.44 moles) was added to the mixture of p-anisidine (1.62 moles) 5 and toluene (3.75 moles) in a two-necked flask. A solution of 3-chloropropionyl chloride (1.63 moles) 6 in toluene (3.75 moles) was added slowly dropwise to the mixture, and the temperature of the reaction mixture was to rise to 50 °C. After completing the addition, the reaction mixture was heated to 60 °C for about 1 min in microwave-assisted synthesizer at 60 psi pressure.

6 - Hydroxy - 3, 4 - Dihydroquinolinone (Step 2) (Scheme1): N - (4 - methoxyphenyl) - 3 - chloro-propionamide (1.40 moles) 7 and N, N-dimethylacetamide (1.78 moles) 9 were added to a three-necked flask. This reaction was carried using an air condenser. Anhydrous trichloroaluminum (AlCl3) (powder) was added slowly over two hours. An exotherm raised the temperature of the mixture from about 25 °C to 140 °Cduring the addition of Lewis acid AlCl3. The reaction mixture was stirred and heated at 150-160 °C for two hours. After completion of the reaction, the mixture was stirrable slurry and cooled to room temperature, and quenched by pouring into the water in a fume hood for entrapment of released HCl gas. Sodium boro-hydride (0.79 moles) was added for reduction, which caused the reaction mixture to change from gray to white. The mixture was then cooled and filtered. The collected compound was washed with water and dried in a vacuum to give compound (1.30 moles) 2. Reaction mechanism for synthesis of cilostazol impurity A is given in Fig. 2. 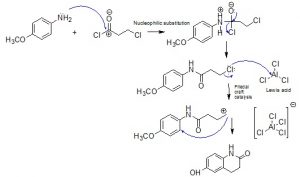 This result was reactant molecule of reaction mixture comes to direct contact with microwaves, resulting in a rapid rise in temperature within few minutes as only the contents of the reaction vessels were heated up and not the vessels. This method gave selective heating of polar molecules and made the process rapid and efficient. Whereas in CS, the heat was driven to the reactant molecule via passing through the wall of vessels, made the process slow and inefficient.

The solvent used in the synthesis was also optimized using two different solvents i.e. toluene and methanol. The reaction was found to be completed in toluene as toluene is aprotic solvent with low dielectric constant and low hindered property whereas the reaction was not complete when toluene was replaced by methanol which is a polar protic solvent as it tends to form hydrogen bonding with nucleophile and hinders the nucleophilic substitution reaction. Along with this, temperature conditions were optimized at 30°C, 40°C and 60°C, that resulted in satisfactory yield in both the methods CS and MW.

Step 2 Preparation of 6-Hydroxy-3, 4-Dihydro-quinolinone (Scheme 1): Synthesis of 6-hydroxy-3, 4-dihydroquinolinone, 2 was carried out using anhydrous AlCl3 (dry). Precautions to be taken during handling of anhydrous AlCl3 is to avoid contact of water as it reacts violently with water and forms explosive fumes of hydrochloric acid.

In order to get 100% pure cilostazol impurity A, the purification step was carried out using column chromatography (adsorbent silica gel 60-120 mesh, mobile phase: dichloromethane and isopropyl alcohol in different ratios). Fractions were eluted from the column and were concentrated, and TLC analysis followed using the chloroform: isopropyl alcohol (4:1) as the mobile phase. Various ratios of dichloromethane and isopropyl alcohol were tried (100% dichloromethane, 99:1, 98:2, 96:4, 94:6, 92:8). Cilostazol impurity A eluted at ratios 96:4, 94:6, 92:8 and this was confirmed by the presence of 1 band at Rf = 0.8 using TLC studies. Synthesis of 2 was not possible by MW assisted synthesis due to the highly exothermic nature of this reaction and anhydrous Lewis acid AlCl3 used in the synthesis is not amendable for use under microwave irradiation. 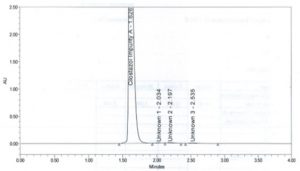 CONCLUSION: A simple synthetic method is described for the preparation of Cilostazol impurity A. The target impurity was synthesized using a blend of both conventional and microwave methods. It was characterized using FTIR, 1H and 13C NMR, LC-MS and HPLC. This route of synthesis resulted in a high purity product of more than 99% and could qualify as an impurity reference standard. The procedure was simple and easy to scale–up with good percentage yield.

ACKNOWLDEGEMENT: The authors are thankful to the Reference Standard Division, Indian Pharmacopoeia Commission, Ministry of Health and Family Welfare, Govt. of India, Ghaziabad, India for supporting this work.

CONFLICTS OF INTEREST: The authors have no conflict of interest to declare.