ABSTRACT: A new physiologically active compound E-2-((2-amino pyridine-3-yl) methylene amino)ethane thiol derived from the condensation of Cysteamine and 2-amino Pyridine 3-Carbaldehyde was synthesized and characterized by spectral techniques like IR, UV-Vis,1H- NMR, TG-DTA, ESR, CHN analyses. The complexes were further screened for their biological activity at Nishka labs and Nickel and Cobalt complexes were found to be potent antibacterial agents. From the above analysis it was found that the ligand behaves as a neutral  ligand with N: N: S:N:N donor sequence for octahedral complexes.

Mononuclear complexes of Pd(II) with Cysteamine dihydrochloride  were studied  by Gasanov. Kh. I.3 The drastic decrease in the reactivity of thiols and disulfides complexes by cucurbit[6]uril (CB6)were studied by Strimbu Berbeci Lidia et.al 4.

Electrochemical synthesis and characterization of zinc(II) and cadmium(II) complexes of dianionic tetra dentate Schiff base ligand were reported by Rodriguez, Laura 5. The effect of chelating phosphines was tested on the structure and pH-dependent stability of Ni-cysteine binding by Desrochers, Patrick J 6. McDonnell, Nazli B 7 have studied Zinc ejection as a new Rationale for the use of Cysteamine and Related Disulfide-Containing Antiviral Agents in the treatment of AIDS. Formation of a covalent complex between methylguanine methyltransferase and DNA via disulfide bond formation between the active site cysteine and a thiol-containing analog of guanine were studied by Paalman, Susan R 8 et.al.

A novel dinuclear iridium(III) complex with a bridging disulfide bond were studied by Konno Takumi 9  in which two octahedral Ir(III) units are linked by a coordinated disulfide bond. Cu(II) complexes of Schiff base ligands formed by the condensation of Cysteamine or 2,2'-diaminodiphenyldisulfide with salicylaldehyde or pyridine-2-carboxaldehyde and their C:N reduced analogs were isolated and characterized  by Uma R & Palaniandavar, M10. Kapanadze, T. Sh 11, studied the Stereochemistry of the isomerization of cobalt (III) complexes of cysteine and Cysteamine. Cu(II)  and Ni(II) Cysteamine complexes were prepared and characterized by D. Carrillo et.al 12, which appeared to have  a distorted octahedral and tetragonal symmetry. Cysteamine complex formation with DNA was studied by Ryadovoi, G. V. et.al.13.

2-Amino-3-Carbaldehyde along  with 2-methyl-7-amino-1,8-naphthyridine was used to design  a colorimetric /fluorescent sensor with specific response  to Cu(II) as this is a significant metal pollutant and an essential trace element in biological systems 14. Schiff base condensation of the aldehydes function of pyridine 3- carbaldehyde with –NH2 group of amino ester /peptide was studied by Alvarez et.al, and their metal complexes with Mn & Re were reported 15.

Synthesis of the starting material: Cysteamine dihydrochloride was used as purchased from Sigma Aldrich. 2-Amino pyridine 3-carbaldehyde was prepared from Nicotinamide and the procedure is given below.

A mixture of ammonium sulfamate(52.0 g, 450 mmol) and Nicotinamide (36.5 g, 300 mmol)was heated at 150 °C (in a molten state) under nitrogen. Over 2 h, the temperature was raised to 200 °C and maintained for 8hour. After cooling, the solid was suspended in water (80 mL). After the mixture had been stirred for 1 h, the remaining solid was filtered off and washed with diethyl ether. It was dissolved in 2 M hydrochloric acid and heated under reflux for 6h.On neutralization of the cooled solution with solid sodium carbonate, a precipitate formed. The mixture was extracted eight times with diethyl ether (80 mL). The combined organic layers were dried with sodium sulfate and the solvent was evaporated to yield a yellow solid (8.0 g, 22%) sufficiently pure for further synthesis.

Preparation of Schiff base:

Cysteamine 44.73m mol(6.8g) and 2-Amino pyridine 3-Carbaldehyde 89.47m mol(10.92g) were reacted in a round bottom flask in Methanol under reflux  conditions  for 21 hours on a water bath. Yellow precipitated solid was filtered, washed with cold methanol and dried up. 14.1g(87.5%) of Pure yellow solid obtained.

Preparation of Metal complexes of the Schiff base: The ligand, 3-((1E)-(2-(2-((E)-2-((pyridine-2-amine-3-yl) methyleneamino) ethyl) disulfanyl) ethylimino) methyl) pyridine-2-amine, was sealed  in a 50ml RBflask with small amount of methanol, then metal salts are dissolved in alcohol with small amount of water and were added to the ligand in 1:1 ratio, immediately the appearance of metal complexes was noticed. The complexes were further refluxed for 30 min. on a water bath and then filtered,purified and dried in vacuo for further spectral characterization.

The synthesized ligand and metal complexes were analyzed for physical data like color, yield, melting point & Solubility. The magnetic moments were calculated from the equation: using the weight of the complex within the magnetic field and without the magnetic field by Gouy method. All the data is provided in Table 1. 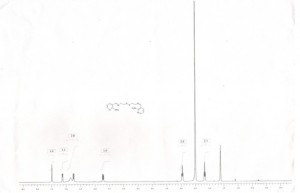 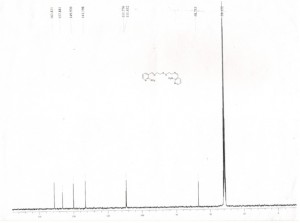 Mass spectra: Mass spectral data has further confirmed the structure of the complex. The mass spectral fragment at 438 itself is the complex molecular weight which shows the two side condensation of the Cysteamine with the aldehydes. The base peak at m/z 360 is the ligand peak after the removal of H2O and the metal atom. The other mass spectral peaks also confirm the predicted srutcture. 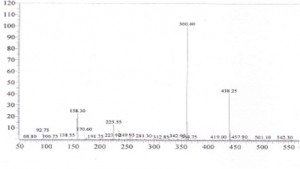 Copper complex is showing a ‘g’ value of 2.118 which indicates the symmetric environment around the metal atom. Whereas the Vanadium complex is showing three different ‘g’ values at gxx=2.12724, gyy=2.08529, gzz=2.03315 which itself is indicative of an uneven distribution of the electronic environment which further substantiates our prediction of square pyramidal geometry around the central metal ion.

Carbon, Hydrogen, Nitrogen and Sulphur were analysed and the data is compiled in the following table.

TG-DTA of the complexes were carried out in air atmosphere, in platinum pan and from 360 C to 6000C temperature. The air flow was maintained at 50 ml/min. The data shows the loss of water molecule in the Ni(II)complex at around 160-180oC which further supports our predicted structure of one coordinated water molecule. In the Zn(II) complex the loss of water occurs at 1200C which substantiates the presence of coordinated water in the metal complex. This is in concurrence with the proposed structure of the metal complexes. 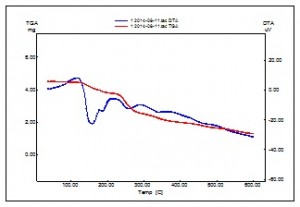 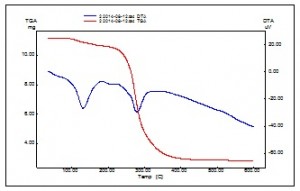 Determination of zone of inhibition of test substances against Escherichia coli, &Staphylococcus aureus were studied at NISHKA labs, Uppal, Hyderabad. Sterile Nutrient Agar plates were prepared and 0.1 ml of the inoculum from standardized culture of test organism was spread uniformly. Wells were prepared by using a sterile borer of diameter 10mm and 100μl (To get the final concentration of 1000, 500, 250, μg/well) of the test substance. The plates were placed at 400 C for 1 h to allow the diffusion of test solution into the medium and plates were incubated at a temperature optimal for the test organism and for a period of time sufficient for the growth of at least 10 to15 generations. The zone of inhibition of microbial growth around the well was measured in mm.

Three metal complexes of Vanadium, Nickel and Cobalt were analyzed for their antimicrobial activity against E.coli & Staph.aureus at three different concentrations i.e. at 1000µg, 500 µg & 250 µg. Out of the three complexes Vanadium did not show any promising results whereas Ni+2 show a ZOI of 10.50 mm against Staph.aureus at 1000 µg, whereas Co+2 showed activity against both the organisms, with 13.00mm ZOI at 1000 µg for E.coli and 15.0 mm ZOI at 1000 µg for Staph.aureus. 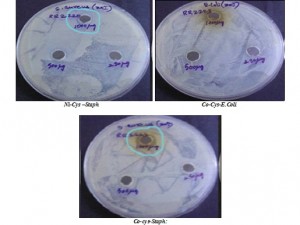 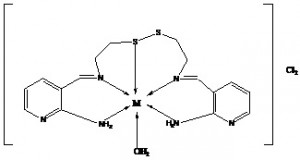 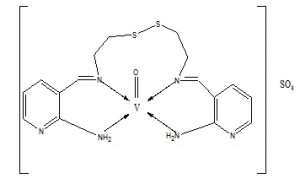 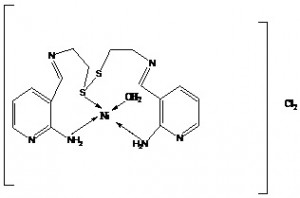 ACKNOWLEDGEMENTS: The authors would like to thank the HOD, Department of Chemistry and Principal, Nizam College for extending the support to carry out the research work. The authors are thankful to Nishka labs which helped to carry out the microbial activity. We also extend our thanks to IIT-Bombay for recording the ESR spectra.