ABSTRACT: In response to the spacious propagation of bacterial contamination stimulated by pathogens, the evolution of novel therapeutics with eminent antibacterial action is of avid concern. When the skin unity is ruptured accidentally or intentionally, its natural defenses will thus be vitiated, and topical medication may be prescribed. Topical medicaments are designed to either obliterate or inhibit the augmentation of pathogenic microorganism and can be consumed for both prophylaxes as well as treatment of superficial infection. Here is a novelize graphene-usnic acid conjugate was developed by way of a mere non-covalent process, and the loading and release demeanor of usnic acid on graphene were investigated. An effective loading of usnic acid on graphene prevailed at the initial usnic acid assiduousness of 300 mg/ml. The developed conjugate was embedded into biocompatible Eudragit polymers to formulate topically active microspheres. Formulated microspheres were characterized by FTIR, TGA, and graphene. Antibacterial activity was studied by the broth dilution method. Results disclosed that amalgamation of graphene and usnic acid had enhanced antibacterial activity against pathogen S. aureus. The outcomes-focused potential of formulated graphene-based microspheres for effective management of topical skin bugs and shed light on application of carbon allotrope graphene nanoplatelets in the arena of biomedicine.

Graphene with their highly piercing edges is amenable to detrimental of bacterial cell membranes. Commonly the broadly accepted mechanisms of the antibacterial activity of graphene include the synergistic outcome of membrane perturbation to the cell envelope and oxidative stress, which are kindred with the physical and chemical properties of graphene 4. Nanoscaled drug carriers have appeared as a bridge linking nanotechnology and modern drug delivery, implying nanoscaled materials such as microspheres, microparticles, nanoparticles, and carbon nanotubes. The drug is loaded on these nanoscaled materials by numerous kinds of mechanisms such as embedding, surface absorption, hydrogen bonding and former types of interactions.

Graphene besides can be inserted with hydrophilic groups like hydroxyl and carboxylic and can be well spread in aqueous solution, which makes it a promising material as a drug carrier substance 5. The tremendous act of graphene or graphene derivatives, merged with the improvement of the polymer matrix, constructs graphene/polymer composites appropriate for function in conductive devices, covering and biological and pharmaceutical field 6, 7, 8.

Microspheres configured to control drug relinquish into the skin assure that the drug remains localized at the diligence site and does not unnecessarily embark into the systemic circulation 9. They dissemble as reservoir acquitting an active ingredient over a protracted period asserting competent drug concentration in the skin and at the identical time, slenderizing unsought side effects 10.

Hence is peculiarly crucial in the treatment of infectious diseases owed to the obstruction of antimicrobial resistance. Such delivery systems may also aggravate drug stability or meliorate incorporation into pertinent vehicles 11. Usnic acid [2, 6-diacetyl-7, 9-dihydroxy-8, 9b-dimethyl -1, 3 (2H9βH)- dibenzofurandione] a prominent example of antimicrobial compound usually found in the genus Usnea is a yellowish pigment acquired by various lichen species.  It has been authenticated to have antihistamine, spasmolytic, antibacterial, antiviral, analgesic, antipyretic, antiproliferative, anti-inflammatory, antibiotic and as an immunologic modulator property 12. Herein, we report a novel non-covalent conjugation formed by graphene with usnic acid and investigated the loading and release demeanor of usnic acid by graphene. Moreover, the interaction between the graphene and usnic acid was inquired by spectroscopy.

TABLE 1: LIST OF INGREDIENTS AND THEIR QUANTITY USED FOR THE FORMULATION OF MICROSPHERES BATCHES (B1-B4)

The polymer was dissolved completely in 5 ml chloroform as the internal phase using a mechanical stirrer at 800 rpm and after that usnic acid 50 mg added followed by stirring at 800 rpm. The solution was then added dropwise with a syringe (24 gauzes hypodermic needle) to a solution of polyvinyl alcohol (PVA) in water (0.5% w/v) which acted as the external phase. This is the basis of the technology because most of the solvent disappears by evaporation. Solvent removal and hardening of the microspheres was done by continuously stirring the mixture for about 5-6 h. Microspheres were isolated by filtration and washed with n-hexane several times to remove residual PVA and solvent 13.

Thermal Gravimetric Analysis (TGA): TGA recorded the decrease in the weight of the sample as a function of the temperature. Graphene, usnic acid, polymers (Eudragit RL100/Eudragit RS100) and formulated microspheres were placed in aluminum pans and heated in nitrogen atmosphere at 10º C/min utilizing Perkin-Elmer TGA-7. The heating range of TGA-7 was 20 - 900 ºC 15.

Scanning Electron Microscope (SEM) Analysis: Scanning electron microscopy has been used to determine particle size, surface morphology, and texture. SEM studies were carried out by using a scanning microscope. Surface topography and morphology examination of the dried microspheres was carried out using a scanning electron microscope equipped with a secondary electron detector at an accelerating voltage of 10 KV.

Dry microspheres were placed on an electron microscope stub covered with a black adhesive tape and observed under a microscope after applying vacuum. Each sample was coated with gold to a thickness of about 30 nm in a vacuum evaporator 16.

Determination of Drug Content: The various batches of the microspheres were subjected to drug content analysis. Accurately weighed microsphere samples were mechanically powdered. The powdered microspheres (5 mg) were dissolved in adequate quantity (10 ml) of phosphate buffer pH 6.8 and then filtered. The UV absorbance of the filtrate was measured using a UV spectrophotometer (Shimadzu, pharma-Spec1700) at 291 nm.

FTIR spectra of Eudragit RL 100 and Eudragit RS 100 were exhibited O-H stretching of hydrate band at 3429.99 cm-1, C=O stretching at saturated aldehyde at 1735.65 cm-1, N-R stretching of quaternary amine salt at 1384.86 cm-1, and C-O-C stretching of a strong band of ester at 1735.65 cm-1. All characteristics peaks of usnic acid, graphene, graphene usnic acid conjugate, PVA, Eudragit RL100, and Eudragit RS100 were observed in the FTIR spectra of microspheres. The results showed that no chemical interaction or alterations took place during the conceptualization of microspheres and, the drug was found to be compatible with excipients. 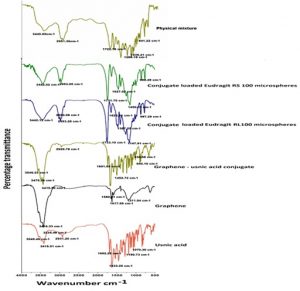 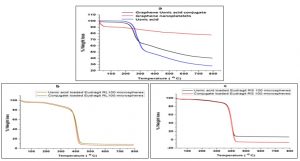 Particle Size Analysis: The particle size was dictated using an optical microscope (Olympus Dewinter, New Delhi, India). Approximately 20 particles of microspheres were counted for ceremonious size distribution. The formulated microspheres (batches B1 to B4) were found to have spherical, smooth and regular surface Fig. 3.

It can be seen that microspheres are almost spherical with a smooth surface and no drug crystals were found on their surfaces which might be attributed to the uniform removal of the solvent by evaporation to produce even polymer distribution. 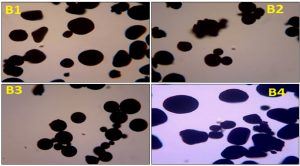 FIG. 3: PARTICLE SIZE OF DRUG AND CONJUGATE LOADED MICROSPHERES BATCH (B1 -B4) 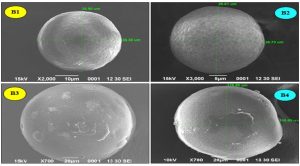 FIG. 4: THE SCANNING ELECTRON MICROSCOPY MICROPHOTOGRAPHS OF ALL BATCHES (B1 - B4)

Drug Content Studies: Drug content was determined in phosphate buffer pH 6.8 through UV spectrophotometer at λmax 291 nm. B1, B2, B3, and B4 microspheres were found to have 59.12 mg, 65.27 mg, 50.13 mg 54.23 mg respectively. It was concluded that conjugate loaded microspheres possess high drug content attributing to higher absorption behavior of graphene present in it.

The release rate of Eudragit RS100 microspheres exhibit a lag time at the initial release, and the best release was observed with formulation B2. Moreover, drug release from conjugate loaded B2 and B4 microspheres were found to be higher as compared to usnic acid loaded B1 and B3 microspheres which conclude that formulation of conjugate facilitated more diffusion of drug owing to nature of graphene present in it. 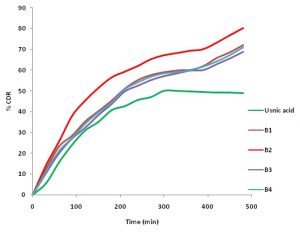 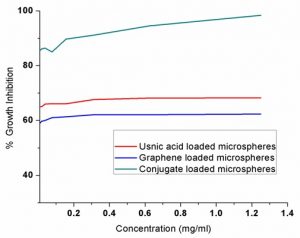 CONCLUSION: Graphene-usnic acid loaded Eudragit RL100, and a solvent evaporation technique explicated Eudragit RS100 microspheres. The formulations evinced controlled release of drug through the skin, signifying wagerer potential of the delivery system as equated with the arrant drug of usnic acid. The formulation revealed enhanced retention of drug in the skin, indicating meliorate potential of the delivery system. On the grounds of efficacy and improved patient compliance due to reduced frequency of application, microspheres based formulations will have a significantly better role in the systemic treatment of anti-bacterial infection. Formulated microspheres were found to have a spherical and porous surface, facilitating high payload and meliorate drug release.

FTIR spectra of microspheres inveterate presence of drug and polymer by predicting wave number of their respective functional groups. TGA analysis showed better thermal behavior with no drug-polymer interaction. Batch 2 microspheres prepared from Eudragit RL 100 showed eminent drug release, attributed to more permeability as compared to Eudragit RS 100 microspheres. The result showed that the concentration of Eudragit RL 100/ Eudragit RS 100 and the concentration of PVA significantly affected the particle size, drug content and in-vitro drug release. Eudragit RL 100 produced B2 microspheres containing with an average particle size of 26 µm, drug content (65.27) and 89% drug release. Batch B2 was reported better as it exhibited maximum controlled drug release. The kinetic data of the in-vitro diffusion release of graphene usnic acid conjugate loaded microspheres was found to pursue Peppas model kinetics, based on r² values giving higher results of B2 than B1.

Microspheres system have been found to have good potential for prolonged drug release, enhanced retention of drug in the skin, indicating the better potential of the delivery system and therefore can be beneficial for use in the treatment of various topical microbial infections.

ACKNOWLEDGEMENT: We would like to express our profound gratitude to the faculty members to the University Institute of Pharmacy, Chhatrapati Shahuji Maharaj University Kanpur, as well as IIT Kanpur, for their kind help and cooperation in completion of this research project work.