ABSTRACT: Cancer is one of the emergings, and best-understood neoplasm’s from a genetic perspective, yet it remains the second most common cause of cancer-related death, indicating that some of its cancer cells are not removing completely by current therapies. Chitosan is a polysaccharide β-linked D-glucosamine and N-acetyl-D-glucosamine were used as conjugate to 5Fluorouracil. 5FU is one of the most commonly used drugs to treat cancer. The present invention relates the 5 Fluorouracil drug react with chitosan and formed chitosan – 5FU conjugate and used as Nobel anticancer models in zebrafish as an alternative model. The conjugated drug may highly selective and sustain release of drug to treat effectively colon cancer models in zebrafish. 5-fluorouracil react with chloroacetic acid in presence of potassium hydroxide gives 5-fluorouracil acetic acid. 5-fluorouracil acetic acid reacts with chitosan and formed chitosan -5FU conjugate. Characterization of chitosan folic acid and chitosan 5FU studied details by FTIR and NMR and showed well structural conformation.

The use of the chitosan-5FU conjugate compound is highly significant in case of grade 4 and grade 3 colon cancer. Shrinkage of the high-grade tumor may be possible by this chitosan-5 FU conjugated drug delivery. After colon tumor operation, regular post-operative treatment may be also effective to remove the migrating colon tumor cells present in the body. The conjugated drug may be highly effective for better treatment in different types of cancer including colon cancer. The conjugated drug may highly selective and sustain release of drug to treat effectively Colon cancer models in zebrafish. Further studies will be pharmacological evaluation in Zebrafish Xenotransplant Colon Cancer Model by using Chitosan-5FU conjugated formulation.

Synthesis of 5 Fu-Acetic Acid: In a 250 mL of round-bottomed flask 5-FU (20 mmol) was dissolved in a solution of potassium hydroxide (80 mmol) in 15 mL of water. While this solution was warmed in a 42 °C in water bath, a solution of chloroacetic acid (35 mmol) in 10 mL of water was added over 30 min. After this, the reaction was stirred for 2 h at this temperature. It was allowed to cool to room temperature (15 °C) and the pH was adjusted to 5.5 with conc. HCl. The solution was then cooled in a refrigerator for 2 h. The precipitate formed was removed by filtration. The solution was then adjusted to pH 2 with conc. HCl and put in a freezer for 5 h. The resulted white precipitate product was isolated by filtration, washed with water 2-3 times and dried in vacuum oven at 35 °C for 7 h. The yield 82%, White solid, and M.P. 253–255 °C was obtained according to procedure as described elsewhere 9.

Synthesis of 5 FU-CS conjugates: To synthesize chitosan–5 FU conjugate 100 mg of chitosan powder was dissolved in 1% (w/v) hydrochloric acid. The mixture was vigorously stirred by a magnet stirrer at room temperature until the polymer was completely dissolved. 0.300 g 5 flurouracil-1-yl acetic acid solution was added into the chitosan solution and stirred for 2 h. Then, 0.355 g EDC dissolved in 20 mL of 95% ethanol was added to induce the acylation reaction. The mixture was then stirred for 8 h at room temperature (15 °C). When the reaction finished, the product was then filtered by vacuum and washed with 95% ethanol to remove excessive DCC. The final product was dried in a vacuum oven at 35 °C for 4 h and structural conformation will be evaluated by FTIR and NMR studies 10-12. 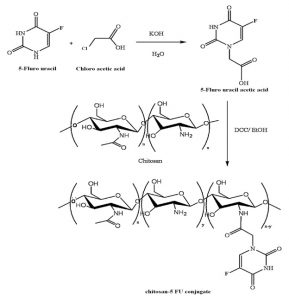 FTIR Studies: Fourier transform infrared spectroscopy (FTIR) 2.5% w/w of sample, with respect to the potassium bromide (KBr) disc, were mixed with dry KBr (FTIR grade, Aldrich, Germany). The mixture was ground into a fine powder using an agate mortar before compressing into a disc. Each disc was scanned at a resolution of 4 cm-1 over a wavenumber region of 400 to 4000 cm-1 visible spectrophotometer using an FTIR spectrometer (Spectrum RX1 FTIR system, Perkin Elmer, USA). The characteristic peaks of IR transmission spectra were recorded. At least triplicates were carried out for each batch of the sample, and the results averaged 13. 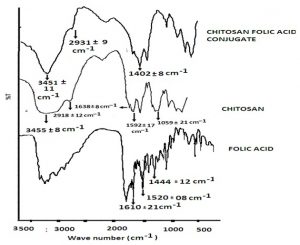 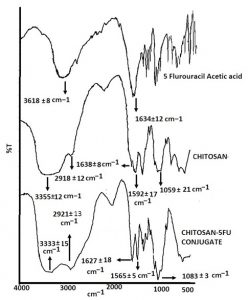 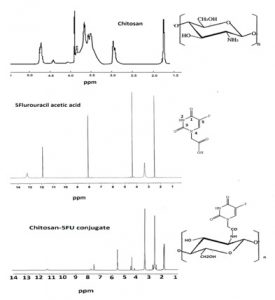 CONCLUSION: 5 Fluorouracil drugs react with chitosan and formed chitosan – 5FU conjugate and will be used as Nobel anticancer models in zebrafish as an alternative model. Characterization of chitosan folic acid and chitosan 5FU studied details by FTIR and NMR and showed well structural conformation.

ACKNOWLEDGEMENT: I am thankful to Dr. Divakar Goli, Campus Director, Acharya Institutes who initiate to write Rajive Gandhi University of Health Sciences (RGUHS) project proposal. I acknowledge the RGUHS for supporting the sponsoring budget for the project.

I also thank Dr. Anirban Bose who helped me to write project proposal and explain the idea about this project. I am grateful Mr. B Premnath Reddy, Chairman, Acharya Institutes, Dr. Giles, Principal, ABMRCP for providing facilities to smooth running of project.