ABSTRACT: Sericin is a globular protein obtained from degumming of silk cocoon in the silk reeling process. The sericin film was synthesized for the application of antibacterial wound dressing, but it has a low physical property, hence the synthetic polymer was used in the synthesis of highly stable biocompatible film. The PVA based sericin film was prepared by solvent casting method by the addition of synthetic polymers - polyvinyl alcohol (PVA) to give the mechanical stability and the glycerol was added as a plasticizer. The characterization of PVA based sericin film for its antibacterial properties and the swelling ratio was evaluated. The PVA based sericin film showed significant antibacterial activity for wound pathogenic bacteria such as E. coli, S. aureus, K. pneumoniae, P. aeruginosa, and Proteus species and the swelling ratio of the film was 70% which indicates that the sericin has high moisture holding capacity which improves the wound healing process. The sericin film was also proved that it was biocompatible for biomedical applications.

According to the Centre for Disease Control and Prevention (CDC) and Nwachukwu et al., 3 Staphylococcus aureus was the major causative organisms of wound infection followed by Escherichia coli. The conventional wound dressings were not effective in the healing process due to the inability to inhibit invasion of bacterial pathogens 4. Also, problem encounters due to frequent changing of dressing materials 5.

In the last few decades, various natural and synthetic substances were used to synthesis significant wound dressings. The silk cocoon of Bombyx mori is a natural biopolymer which is made up of two proteins: sericin and fibroin. Sericin is water - soluble glycoprotein constitutes 30% whereas fibroin is a hydrophobic glycoprotein constitutes 70% of silk cocoon. Sericin, a gummy substance attaches to the fibroin to give structural stability to the silk cocoon. Silk cocoon was degummed and releases wastewater to the environment approximately 50,000 tons from 1 million ton of fresh silk cocoon annually 6.

However, pure silk sericin was not able to develop a film or membrane because the mechanical strength was low and it becomes fragile. In order, to improve the mechanical strength and flexibility of the film or membrane with the help of synthetic polymers such as Polyvinyl alcohol (PVA) 12. The PVA is a synthetic biodegradable polymer and widely used for biomedical applications due to non - toxic, biocompatible and significant mechanical property 13. Therefore, the present study is to synthesis a PVA based sericin wound dressing to overcome the disadvantage of conventional wound dressings and also to investigate the antibacterial activity, biodegradability, and biocompatibility of sericin based film.

Extraction of Silk Cocoon: The silk cocoon of Bombyx mori was cut into small pieces and degummed 10 g of the cocoon in 1000 ml distilled water at 120 °C for 60 min along with 0.05 M sodium carbonate. The degummed cocoon was filtered, and the filtrate was centrifuged at 10,000 rpm for 20 min and removes the debris. Then the solution was dialyzed in dialysis tubing against the double distilled water. In the dialysis process, the distilled water was changed every 2 hrs for 48 hrs. After dialysis, the sericin solution was evaporated at 60 °C until become dried, and it was stored in a refrigerator for further study 14. The degumming ratio of silk cocoon was calculated using the formula 15.

Preparation of PVA and Sericin Film: The sericin films were prepared using PVA polymer, glycerol (G) and sericin. PVA solution (3.0 %) was dissolved with double distilled water and kept it in a magnetic stirrer at 200 rpm for 4 h to form a clear solution. Than 1.0% (w/v) sericin and 0.2 ml of glycerin was added and placed on a magnetic stirrer 16 and stirred at 300 rpm for 2 h to form a homogenous solution. The solution was cast on Teflon plate and dried in an oven at 60 ºC for 24 h 9.

Antibacterial Assessment of the Synthesized Film: The synthesized PVA and PVA based Sericin (PVA + S) film were studied for their antibacterial activity by disc diffusion method (ISO 20645 International Standards Organization) against the wound pathogenic bacterial cultures such as E. coli, S. aureus, K. pneumoniae, P. aeruginosa, and Proteus species. The wound pathogenic bacteria were subcultured in Luria Bertani (LB) broth and incubated at 37 °C for 24 h, and the cultures were adjusted to MacFarland’s standard (10-5 - 10-6 CFU/ml). AATCC agar plates were prepared, and the pathogenic bacterial cultures were swabbed on the agar surface of the medium. The sample PVA and PVA + S films of size 2 cm in diameter were placed on the agar surface and then incubated at 37 °C for 24 h, and the zone of inhibition was measured 17.

Fourier Transform - Infra Red Spectroscopy: Fourier transform infrared (FTIR) spectroscopic analysis of PVA and PVA based Sericin (PVA + S) film were measured with Shimadzu FTIR spectrophotometer. The spectrum of the samples was attained in transmittance mode with a 4 cm-1 resolution and 4000 cm-1 to 400 cm-1 spectral range 18.

Swelling Behavior: The synthesized PVA and PVA based Sericin (PVA + S) films were cut into 20 mm × 20 mm and kept in an oven at 50 °C for 4 h and the dried weight (SRD) was measured. The dried samples were placed in the phosphate buffered saline and incubated at 37 °C for 12 h then the wet weight (SRW) was measured. The swelling ratio of the sample was determined using the formula 19.

Haemo-compatibility: The biocompatibility of the synthesized film was done by ASTM F 756-00, 2000 (American Society for Testing and Materials) standard method 20. The samples PVA and PVA based Sericin (PVA + S) film were kept in saline and equilibrated at 37 °C for 24 h. Then the samples were transferred into 7 ml of phosphate buffer and incubated at 37 °C for 3 days. Subsequently, the buffer solution was removed, and 1 ml of anticoagulated blood was added to each sample. The anticoagulated blood containing samples were incubated for 3 h and then centrifuged at 3000 rpm for 10 min. Distilled water and phosphate buffer were used as a positive and negative control. The haemo-compatibility of the sample was measured at 540 nm using a spectrophotometer and was calculated using the formula

Extraction of Silk Sericin: The silk sericin was extracted from silk cocoon of B. mori using 0.05 M sodium carbonate at 120 °C for 30 min, and the yield of the sericin was 28%. The use of sodium carbonate breaks the protein interactions and removes sericin. Namrathasrinivas et al., (2015) 21 has obtained 13.4% of sericin at 0.5% of sodium carbonate in boiling temperature. Gimenes et al., 22 reported that the hydrogen bonding stability of the silk cocoon was decreased while increasing the temperature and the fibroin was not dissolved due to the hydrophobic amino acids.

Antibacterial Assessment of the Synthesized Film: The wound infection is a major problem that delays wound healing process. As a result, the development of sericin based antibacterial wound dressings that protect from various pathogenic bacteria as well as improves the collagen production during wound healing process 23. The antibacterial activity of the synthesized PVA and PVA based sericin film were evaluated against the wound pathogenic organisms, and the results were depicted in Table 1 and Fig. 1.

The sericin film showed significant antibacterial activity against all the tested pathogenic organisms, and the PVA film without sericin has no antibacterial effect. 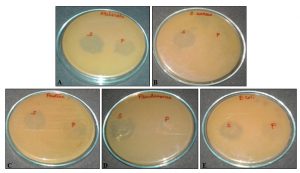 The maximum antibacterial activity was shown in P. aeroginosa followed by S. aureus, E. coli, K. pneumonia, and Proteus species. The amino acids of sericin inhibit the growth of pathogenic bacteria by attaching to the cell wall which inducing the leakage of cellular components eventually disintegrates the bacterial cell 24.

Swelling Behaviour: The water retention capacity of the films was evaluated by swelling behavior and it also plays an essential role in the wound dressings. The swelling ratio of PVA and PVA + S films showed 3.9 ± 0.2% and 70 ± 0.3% respectively.

The PVA based sericin film has high swelling ratio due to the presence of hydrophilic amino acids such as serine and glycine in sericin. Sericin maintains the moisturizing effect in the wound which improves the healing mechanisms 19.

Haemocompatibility: The biocompatibility of the synthesized PVA and PVA based sericin films were analyzed by ASTM F 756 - 00 (2000) method in-vitro. According to this method, the hemolysis was categorized into three levels: nonhemolytic (below 2%), slightly hemolytic (2 - 5%) and hemolytic (above 5%). The hemocompatibility of PVA and PVA based sericin showed 0.04% and 0.19% respectively. This indicates that the synthesized films were nonhaemolytic and are highly suitable for wound dressings 20.

FIG. 2: FTIR ANALYSIS OF THE PVA AND SERICIN FILM

TABLE 2: FTIR ANALYSIS OF THE PVA AND SERICIN FILM

ACKNOWLEDGEMENT: The authors would like to thank the Department of Microbiology, PSG College of Arts & Science, Coimbatore for providing necessary facilities to conduct the studies.

CONFLICT OF INTEREST: There is no conflict of interest among the authors for publishing this manuscript.