INTRODUCTION: Colon cancer is one of the most prevalent cancer and is ranked as the second most common type of cancer 1. However, when colorectal cancer reaches to stage III, it causes uncontrolled growth and uncontrolled cell proliferation leading to metastasis 2.

The cancerous cells penetrate the walls of blood vessels, after which these circulating tumour cells need new blood cells for growth and spread across the body. This refers to as angiogenesis 3.

Many anti-angiogenesis drugs were used, but these drugs were not found to be efficacious for long term treatment 4 - 6. This might be because of development of resistance towards antiangiogenic agents by the metastatic cancer cells. Meloxicam as NSAIDs, is selective COX-II inhibitor. COX-II influences all aspects of cancer cells like, cell proliferation, survival, motility, invasiveness and apoptosis resistance 7.

Inhibition of COX-II activity by Meloxicam may execute its antitumor effects by blocking PEG-2 regulated cell signalling pathways 8 - 11. This, indicates that Meloxicam’s anti-angiogenic activity interfere with the growth of metastatic tumours. Meloxicam might have therapeutic potential for metastasis of colorectal cancer 12 - 14. The purpose of this study was to investigate the effect of Meloxicam, a selective COX-II inhibitor for antitumor activity delivered through mesoporous silica nanoparticles (MSN). Mesoporous silica nanoparticles were synthesised by sol-gel process 15 - 18. The synthesised MSN were functionalised with –NH2 linker with the help of 3-aminopropyl triethoxysilane (APTES). Meloxicam was loaded on MSN through –NH2 linker, followed by polyethyleneimine (PEI) coating to facilitate cell internalisation and then functionalisation with folic acid to target folate receptors on cancer cells. The functionalised MSN were then characterised for drug loading efficiency, particles size, surface charge, release profile of drug and were subsequently tested for in vitro cytotoxicity.

Preparation of Mesoporous Silica Nanoparticles: Mesoporous silica nanoparticles (MSN) were prepared by using Sol-Gel method. To the mixture of surfactant Pluronic P-123 and 0.2M HCl solution, tetraethyl - orthosilicate was added dropwise and kept on stirrer at 300 rpm for 20 hours. After stirring, the solution was kept in oven for aging at 80 °C. The particles formed were separated through vacuum filtration and washed with ethanol and water in the ratio of 1:1, 3:2, 1:0, 1:0, 1:0 to remove the surfactant template. Traces of surfactant were further removed by refluxing the particles for 7 hours with ethanol and HCl.

The particles were –NH2 functionalized by 3-aminopropyl triethoxysilane (APTES). Synthesised MSN were dispersed in toluene and ATPES was added to this mixture. The mixture was stirred for 24 hours. After stirring, the particles were centrifuged at 10,000 rpm for 20 mins. The particles were then washed with methanol and water.

Preparation of Meloxicam Loaded Mesoporous Silica Nanoparticles: Meloxicam was loaded onto synthesised –NH2 functionalised MSN by dissolving Meloxicam in dimethyl formamide and MSN. The dispersion was stirred at 300 rpm for 24 hours at room temperature. After stirring, the particles were separated and the supernatant was collected. The particles were washed with methanol to remove the excess of drug from the surface of particles.

Folic acid was functionalised onto poly-ethyleneimine coated nanoparticles. To 10ml dimethyl sulfoxide (DMSO), 25mg of folic acid was dissolved. To this solution MSN’s were dispersed and stirred at 300 rpm for 24 hrs. After 24 hrs, the folic acid functionalised particles were subjected to centrifugation at 10,000 rpm for 20 mins at room temperature. After separation of the particles, the supernatant was collected. The particles were washed with ethanol and dried at 70°C.

Determination of Meloxicam Loading Efficiency of Nanoparticles: The loading efficiency of drug was back calculated using Shimadzu, UV spectrophotometry, model-Lambda 25. The supernatant collected after drug loading and folic acid functionalisation was collected and scanned for the amount of unloaded drug and folic acid.

Determination of Meloxicam Content in Nanoparticles: Assay was performed to determine the drug content of functionalised MSN with validated HPLC method using Perkin Elmer, manual HPLC, model- Series 200- HPLC with Total chrome Navigator, Series 200-UV/Vis LC detector, Series 200- LC pump. The particles were dispersed in N, N-dimethyl formamide and sonicated for 15 minutes. After sonication, the particles were separated and 1 ml of supernatant was diluted with HPLC mobile phase. The mobile phase used was 0.02M potassium dihydrogen phosphate buffer pH 3.5 and acetonitrile (40:60). The column used was C18 (4.6 x 150mm) 5µm. The solution was injected in HPLC at a flow rate of 0.5ml/min and detected at 360nm and the drug content was calculated.

In vitro Release Experiment: The in vitro release profile of Meloxicam from silica nanoparticles was studied with help of phosphate buffer saline of pH 6.8. The study was performed by adding the dispersion of 10mg of product in 1ml of phosphate buffer saline of pH 6.8, in dialysis membrane having 50mm pore diameter. The membrane was added in the measuring cylinder with 30ml of PBS maintained at room temperature with gentle stirring at 150 RPM for 24 hrs. At different time intervals 5ml of aliquots were withdrawn and replaced with equal volume of buffer solution. Collected samples were analysed for Meloxicam released.

Cell Culture and Cytotoxicity of Functionalised Nanoparticles: HT-29 colorectal cancer cells were grown in RPMI 1640 medium containing 10% fetal bovine serum and 2mM L-glutamine. Cytotoxicity was assessed on HT-29 cells using SRB assay which was conducted at Tata Memorial Centre’s Advance Centre for Treatment Research and Education in Cancer. Cells were inoculated into 96 well microtiter plates in 100µL at plating densities depending on the doubling time of individual cell lines. After cell inoculation, the microtiter plates were incubated at 37 °C, 5% CO2, 95% air and 100% relative humidity for 24 hr prior to addition of experimental drug. The study was carried out for five samples Sample 1 (code: MEL), Sample 2 (Code: MSME), Sample 3 (Code: MSFAPE), Sample 4 (Code: MSMEFA), Sample 5 (Code: MSMFP). Meloxicam at different concentrations (10, 20, 40 and 80µg/ml) was added in triplicate in each well separately and cells were incubated at 37 °C for 48 hrs.

In the IR interpretations the peaks at 3299.61cm in Fig. 1(b) represents the NH stretch which indicates that NH functionalisation was successful. Drug was loaded onto MSN with the help of NH- linker. In Fig. 1(c) the peak intensity reduces indicating successful drug loading onto MSN. After the drug loading folic acid functionalization was done. In Fig. 1(d) the peak around 3250cm completely disappears. 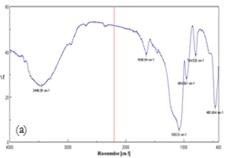 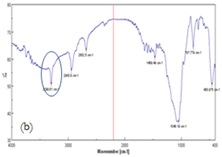 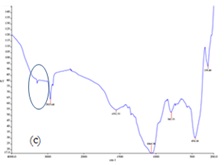 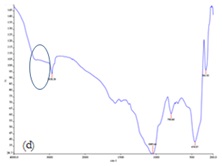 Assay of the functionalised MSN was performed on HPLC. The % Drug content was calculated using the peak area obtained from the sample. The drug content was found to be 93%. 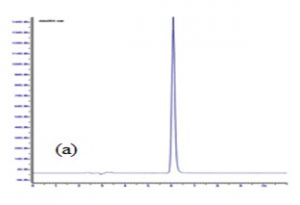 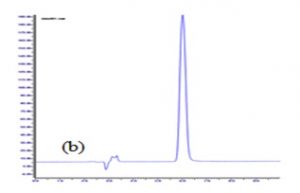 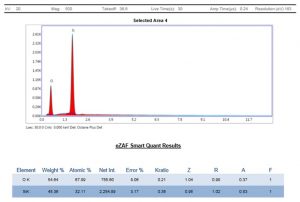 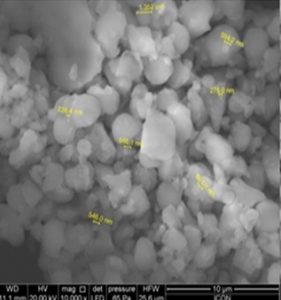 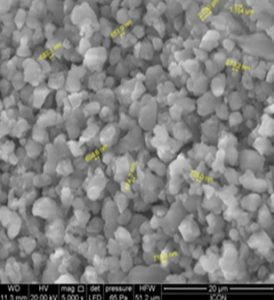 The in vitro cell viability and toxicity study was also performed to analyse cytotoxicity of Meloxicam from the formulation. An SRB assay was carried out on HT-29 cells to determine the Cell toxicity and viability of the final product.

The study was conducted at Advance Centre for Treatment Research and Education in cancer (ACTREC). The GI50 value of formulation was <10 indicating activity. The cell proliferation inhibitory effect of formulation was significantly higher than Meloxicam alone. 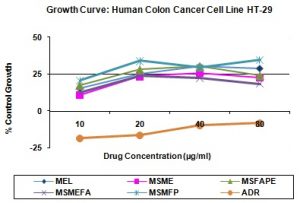 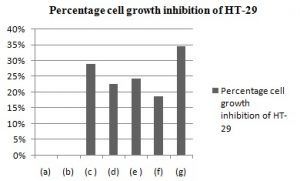 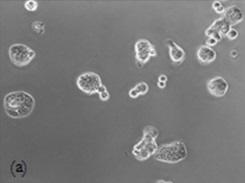 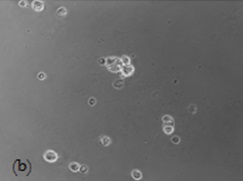 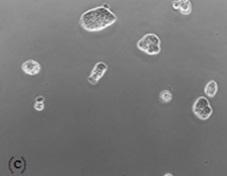 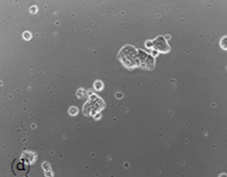 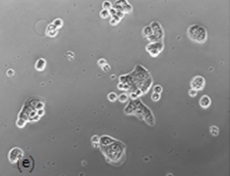 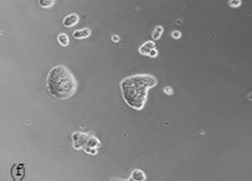 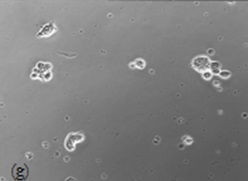 DISCUSSION: Meloxicam is one of the NSAIDs which is commonly used for treatment of arthritis and osteoarthritis. But the promising properties of Meloxicam as, COX-II inhibitor, mainly associated with cancer cells, promoting cytotoxicity enable this compound to be a potential antitumor agent 19. Mesoporous silica nanoparticles have emerged as promising drug delivery systems which improves the efficacy of targeted therapeutic agents to the site of actions 20, 21. They have been extensively used for drug loading of various bioactive molecules and also hydrophilic and hydrophobic drugs 22 - 24. The objective of the study was to investigate whether Meloxicam loaded mesoporous silica nanoparticles can prove to be effective for antitumor activity compared to Meloxicam alone which have proved some antitumor activity.

Nanoparticle size plays a key role in the interaction and activation of drug molecules in cells. Recent research has shown that nanoparticles less than 100 nm in size could result in severe cytotoxicity due to nonspecific cellular interactions. Also previous reports suggested that particles with an average particle size of approximately 150 - 300 nm should be favourable due to ease of internalisation considering the EPR (Enhanced Permeability and Retention) effect 25. Characterisation of functionalised particles indicated the size range between 200 -800 nm. Moreover, the functionalised particles had an approximately positive surface charge due to the presence of polyethyleneimine 26 -28.

The zeta potential value of the final product was found to be +28.7 mV whereas batch MSMEFA which was not coated with polyethyleneimine exhibited a negative shift in surface charge to-0.919 mV. The positive zeta potential of MSMFP facilitated cellular internalisation through negatively charged cell membrane during biological investigations. Hence, from the cell toxicity study it is very evident that the particle size of the MSN was appropriate to ease internalisation. The polymeric coating of polyethyleneimine exhibited a key role in cell internalisation as compared to the uncoated particles which exhibited negative charge 29.

The in vitro release profile showed 36.9% meloxicam release from the formulation. On other hand, the results obtained from the in vitro cytotoxicity showed 34.7% of cell proliferation inhibitory effect. Hence, from the cell toxicity study it is very evident that the particle size of the MSN was appropriate to ease internalisation. As well as the polymeric coating of polyethyleneimine exhibited a key role in cell internalisation. The treatment with Meloxicam for 48 hours with the concentration of 80µg/ml showed the highest cell growth inhibition indicating a positive possibility to outlook on the use of Meloxicam as anti-angiogenic and anticancer agent. These obtained results confirm the fact that there is an exceptional effect of Meloxicam as a COX-II inhibitor responsible to inhibit cell proliferation of cancer cells. That is to say Meloxicam can be delivered through silica nanoparticle drug delivery system.

CONCLUSION: Mesoporous silica nanoparticles were synthesized and loaded with meloxicam to target metastatic colorectal cancer. Synthesis and evaluation of MSN loaded Meloxicam was successfully carried out. Evaluation results of the product shows promising approach for the development of a delivery like MSN. Moreover, the cell viability studies also provide positive results indicating the activity of Meloxicam for colorectal cancer. Further studies are necessary to investigate the therapeutic potential of the nanoparticle system containing Meloxicam and develop a suitable dosage form.

ACKNOWLEDGEMENT: The authors are thankful to Shobhaben Pratapbhai Patel School of Pharmacy & Technology Management, NMIMS for providing research facilities for conducting the research. The co-operation of Advance Centre for Treatment Research and Education in cancer (ACTREC) and Icon analytical laboratories is gratefully acknowledged.