SYNTHESIS AND MICROBIAL STUDIES OF SOME NOVEL SCHIFF BASE CONTAINING PYRIMIDINE

SYNTHESIS AND MICROBIAL STUDIES OF SOME NOVEL SCHIFF BASE CONTAINING PYRIMIDINE

6-chloro 2, 4-diamino pyrimidine reacts with various aromatic aldehyde. Finally, the product was characterized by conventional and instrumental methods. Their structures were determined and important therapeutic properties were studied.

INTRODUCTION: Azomethines are generally known as Schiff bases to honour Hugo Schiff, who synthesized such compounds. These are the compounds containing characteristic -C=N- group. Several methods have been reported for the preparation of azomethines. Selvam et.al1 have prepared sulfonamide and its derivatives as anti-HIV agents. More et. al have marked the biological activity of Schiff bases synthesized from aminothiazoles. Ernst Bayer has reported some metallocomplex Schiff bases derived from o-amino phenol. Schiff bases can be synthesized from an aromatic amine and a carbonyl compound by nucleophilic addition forming a hemiaminal, followed by a dehydration to generate an imine. They are well known intermediates for the preparation of azetidinones, thiazolidinones, oxadiazolines and many other derivatives. Azomethines exhibit a wide range of pharmacological activities like antimicrobial, antiparasitic, anti-inflammatory, anticancer etc.  Pyrimidine and their derivatives posseses several interesting biological activity such as antimicrobial 2-4, antitumor, antifungal activities.  Many pyrimidine derivatives are used for thyroid drugs and leukemia.

MATERIALS AND METHODS: The reagent grade chemicals were obtained from commercial sources and purified by either distillation or recrystallization before use.  Purity of synthesized compounds has been checked by thin layer chromatography.  Melting points were determined by open capillary method and are uncorrected.  IR spectra are recorded on FT-IR Bruker with KBr disc. 1H NMR spectra are recorded in DMSO-d6 on a Bruker DRX-400 MHz using TMS as internal standard.  The chemical shift are reported as parts per million (ppm) and mass spectra were determined on Jeol-SX-102(FAB) spectrometer.

Preperation of 6-chloro 2, 4-diamino pyrimidine: Take 3 neck flask, T.P, Stirrer, Purger, Charge Barbutiric acid, POCl3 and PCl3, now heat the R.M. till 70oC temperature, now pass Cl2 gas and temperature rise up to 100°C so, three Hydroxyl group replace by three chlorine group, progress of the reaction was monitored by TLC. So, here formation of 2, 4, 6 tri chloro pyrimidine. Now, in autoclave taken Liq. NH3 and cool it 0oC temperature, now add 2, 4, 6 tri chloro pyrimidine slowly into it, now heat the RM till 70°C temp. and maintain for 1-2 hrs., then raise the temp., till 100°C and maintain for 1-2 hrs.  Progress of the reaction was monitored by TLC. After the completion of the reaction, filter it and W/C washed with water, suck dry well, then purified in Methanol.

Preparation of 6-chloro-N2-[(Z)-phenylmethylidene] pyrimidine-2,4-diamine: To a mixture of 6-chloro pyrimidine-2,4-diamine  (0.1 mol.) and substituted aromatic acetophenone (0.1 mol.) in ethanol, 1 ml. of glacial acetic acid added then the resultant mixture was refluxed for (5-6 hours), progress of the reaction was monitored by TLC. After the completion of the reaction, the obtained product was poured into crushed ice stirred well; solid obtained was recrystallized from suitable solvent. Their Analytical data and synthetic procedure shown in Tabel 1 and Scheme 1. 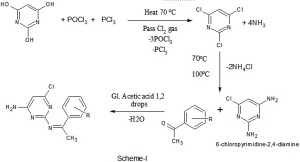 Antifungal activity: Same compounds were tested for antifungal activity against C. albicans A. niger and A. clavatus of a concentrations of 1000, 500, 200, 100 µg/mL respectively.  The results are recorded in the form of primary and secondary screening.  Each synthesized drug was diluted to obtain 1000 µg/mL concentration, as a stock solution.

The data of antifungal activity of this series indicated that, compounds were not showing potential activity against any species. Their Antifungal data are given in Table 2.

CONCLUSION: The Schiff base were synthesized and characterized for their structure elucidation.  Various chemical and Spectral data supported the structure thought of Antibacterial and Antifungal studies of these compounds indicated that  SPv-03 and SPv-04 were good active against all bacteria while all compounds were not showing potential antifungal activity against any species.