ABSTRACT:In order to explore the antihistaminic and anthelmintic activity associated with piperazine framework, several 1-benzhydryl piperazine derivatives and 1- benzhydryl piperazine acyl derivatives were synthesized. Their chemical structure was characterized and confirmed by H1 nuclear magnetic resonance (NMR), Fourier-transform infrared (FTIR). The target compounds were synthesized by the nucleophilic substitution reaction of 1-benzhydryl piperazine with various acyl chlorides. The intermediate (AT-1) was prepared by reaction of benzhydryl chloride and piperazine in presence of anhydrous potassium carbonate in N-N dimethylformamide. Further 1-benzhydrylpiperazine was reacted with various acyl chloride in presence of triethylamine in dichloromethane afforded target compounds (AT5 -9). The anthelmintic activity of compounds were evaluated by Garg and Atal method while antihistaminic activity was evaluated by in- vitro guinea pig ileum.

INTRODUCTION: Benzhydryl are pharmacologically highly therapeutic potential class of compounds and have broad biological profile. Compounds containing the benzhydryl ring have been reported to possess different biological activities such as anticonvulsant, antibacterial, antifungal, anticholinergic, antihistaminic and activity depending on the substutions in the ring system 1.

Literature survey showed that benzhydryl is a versatile lead molecule for design of potential bioactive agents.  Piperazine and its congeners are important pharmacophores that can also found in biologically actives compounds across a number of different therapeutic areas such as anti-fungal, anti- bacterial, antimalarial, antipsychotic, HIV protease inhibitors, antidepressant, and anti-tumor 2.

The development of novel antihistaminic agents with more selective activity and lower toxicity continues to be an area of investigation in medicinal chemistry. Antihistaminic therapy however is neither universally effective nor invariably safe. The traditionally antihistaminic drugs have troublesome sedative and antimuscarinic effects 3, 4. Most of existing drugs are effective as local anaesthetics and also block sodium channels in excitable membranes. Attempts have been made going to develop an H1 receptor antagonist devoidof these properties.

During past decade, heterocyclic structures have received special attention because they belong to class of compounds with proven utility in medicinal chemistry. Benzhydryl moiety has been extensively utilized as drug like scaffold in medicinal chemistry, and as such the benzhydryl skeleton is considered to be privileged structure. Molecules based on the benzhydryl exhibit a multitude of interesting pharmacological activities, including anticonvulsant, antifungal, analgesic, anticholinergic, anti-hypertensive, anti-migraine, anti-allergic, disinfectant and antiseptics 5.

Benzhydryl are important class of compounds and large number of unnatural benzhydryl skeletons with variety of substituent has been prepared via synthetic strategies.

Chemical formula (C6H5)2CH2 and Molecular weight 168.23. Chemistry of benzhydryl contains two benzene ring which substitute hydrogen atoms in the methane molecule.  This structure does not allow the fusion of benzene ring.  This nomenclature system is particularly useful to describe the groups attached to the benzene rings and the additional substituent on the methane. The benzhydryl structure features as the motif for modified fibers, polymers and curing agents.

As a general method for synthesis of  Benzhydryl is Benzylation of excess of benzene is carried out with the benzyl chloride at 120°C in presence of  nanocomposite catalyst  Nafion/SiO2 and another is Diphenylmethane  reacting Dibenzylether  with  benzene  in  the  presence  of  protonic acid  catalysts  which contain a phosphoric acid.

Synthesis of benzhydryl chloride: To a cold solution of thionyl chloride (11.9 ml, 0.1 mole) in two neck round bottom flask, the benzhydrol (0.1mole, 18.5 gm) in di chloro methane wad added drop wise maintaining the temperature at 0-5°C. The reaction mixture was stirred for 4-6 hrs on magnetic stirrer until the HCl fumes ceases out. The reaction mixture was heated on the water bath to evaporate the solvent to get final product.

Chemical Studies: Four derivatives of 1-benzhyrdyl piperazine and five derivatives of 1- benzhydryl piperazine acyl were prepared according to scheme. Percentage yields of all the compounds were calculated and tabulated in table 1 & 2. Their physical constants and thin layer chromatography primarily conformed purity of the synthesized compounds. Melting points and Rf values are also given in the table 3 and 4.

Structures of synthesized compounds were confirmed by infrared and 1H NMR spectroscopy. IR spectra were obtained by preparing KBr pellets on PERKIN Elmer spectrum of RXI FTIT system and are expressed in terms of wave number (cm-1). The proton NMR spectra of the synthesized compounds were obtained by using MODEL Bruker Avance II 400 MHz NMR at using DMSO solvent are also given below the each spectra.

Animals: Indian adult earthworms were collected from moist soil in the I.F.T.M campus & washed with normal saline to remove all fecal matter were used for antihelmintic activity. The earthworm of 3-5 cm in length and 0.1-0.2 cm in width were used for all the experimental protocols due to their anatomical and physiological resemblance with the intestinal round worm parasites of human beings.

Method: Antihelmintic studies were carried out against Eudrilus species of earthworms by Garg and Atal method at 4 mg/ml concentrations. Suspensions of samples (AT1-AT9) were prepared by triturating synthesized compounds (200 mg) with Tween 80 (0.5 %) and distilled water. The resulting mixtures were stirred using a mechanical stirrer for 30 min. The suspensions were diluted to contain 0.4 % w/v of the test samples. Suspension of reference drug albendazole was prepared with same concentration in a similar way.  Five earthworms of almost similar sizes were placed in petri plates of 4 inch diameter containing 50 ml of suspension of test samples and reference drug at room temperature. Another set of five earthworms was kept as control in 50 ml suspension of distilled water and Tween 80 (0.5 %). Observation was made for the time taken to paralysis and death of individual worms. Time for paralysis was note when no movement of any sort could be observed except when the worms were shaken vigorously. The death time was ascertained by placing the earthworms in warm water (50°C), which stimulate the movement if the worm was alive (fig. 1).

Antihistaminic Activity: All synthesized compounds were evaluated for antihistaminic activity. Results are recorded in cm as the height of contraction and are shown Table 4 & fig. 2. 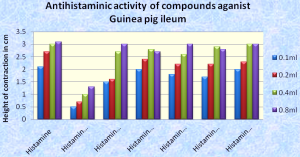 The purity and homogeneity of all compound were confirmed their sharp melting points and TLC.

In all cases, these derivatives were obtained in solid states. Yields obtained from 65.87% to 83.58%. The structures of these compounds were established on the bases of IR spectral analysis and 1H NMR studies.

The biological properties are concerned antihelmintic activity was carried out on compounds (AT 1-9) while antihistaminic activity was carried out on (AT 5-9). Biological results data have showed that compounds (AT-1, AT-4, AT-6, and AT-8) take similar time to kill parasite as that of standard drug albendazole takes. Compound (AT-5, AT-8) significantly reduces the action of histamine at the minimum dose of 0.1 ml and 0.2 ml.