SYNTHESIS AND PHARMACOLOGICAL EVALUATION OF SOME NOVEL 1, 2, 3, 4-TETRAHYDROQUINAZOLINONE DERIVATIVES

SYNTHESIS AND PHARMACOLOGICAL EVALUATION OF SOME NOVEL 1, 2, 3, 4-TETRAHYDROQUINAZOLINONE DERIVATIVES

ABSTRACT: In the study, we have successfully synthesized N-3 substituted tetrahydroquinazolinone by the reaction of isotonic anhydride with aniline derivatives. Thereafter novel derivative would be subjected to synthesize (1, 2, 3, 4-tetrahydroquinazoline) by Mannich reaction with ciprofloxacin and norfloxacin. These synthesized compounds (2a, 2b, 2c, 2d, 2e, 2f, 2g, and 2h) were characterized by FT-IR, 1H NMR, MASS spectroscopy, and elemental analysis and evaluated for their in-vitro antimicrobial activity and anti-inflammatory activity. The antimicrobial activities of synthesized compounds were evaluated against gram-positive and gram-negative bacteria. Amongst these tested compounds 2c, 2d, 2e, 2f exhibited potent antimicrobial activity than the rest of the compounds. All the synthesized compounds were screened for their anti-inflammatory activity using the carrageenan-induced rat paw edema model and exhibited protection against carrageenan-induced edema.

INTRODUCTION: Quinazoline compounds are made up of two fused six-membered simple aromatic rings, i.e., a benzene ring and pyrimidine ring. Quinazoline and their derivatives are an important class of heterocycles with a wide range of pharmacological and biological activities 1. Quinazoline can be divided into two main groups according to their characteristic properties. The first group includes all the quinazoline in which two rings are fully aromatic. These do not behave entirely as pyrimidines. The benzene ring has a profound effect on the properties of pyrimidine ring; it delocalized the π electrons of the 3, 4 double bonds making it reactive. As a consequence of this, quinazoline is reactive toward nucleophilic, which is ready across the 3, 4 double bond 2.

The derivative in this group shows the characteristic reaction of pyrimidines. 1, 2, 3, 4-tetrahydoquinazoline are reactive and observed in reduced pyrimidines, although fused benzene ring confers on them slightly greater stability, and certainly make them easier to isolate 2.

Categories of Quinazolinones: Quinazolinones will be classified into the following five categories, based on the substitution patterns of the ring system 3.

Vilsmeier Reagent in Quinazolinone Synthesis: A novel dimerisation reaction to furnish 3-substituted-4(3H)-quinazolinones in high yield was developed by Perumal et al., by treating 5-substituted-2-aminobenzoic acid derivatives with the Vilsmeier reagent 6.

Derivatisation of 4(3H)-quinazolinones: 4-Chloroquinazolines, compounds are important synthetic intermediates  as they can be derivatised further through the nucleophilic attack at the C-4 position with an intermediate in the synthesis of a quinazoline-derived photoaffinity probe for epithelial growth factor receptor (EGFR) 7.

Intramolecular Coupling of Azides to Carbonyl Groups: The synthesis of optically active l-vasicinone, a known pyrrolo[2,1-b]-quinazolinone alkaloid, was undertaken by Eguchi et al. employing the intramolecular aza-Wittig reaction as the key step in the construction of the quinazolinone ring skeleton 8.

MATERIALS AND METHODS: All chemicals used in the study were of analytical grade purchased from SD Fine-chem limited, LOBA chem., Thomas baker limited, Rankem, CDH, and Qualigens. All the solvents were used after distillation. TLC was run by using silica-coated aluminum sheets (silica gel 60 F254, E Merck, Germany) and visualized in UV light/Iodine chamber. Melting points were determined in open capillary tubes in a Jyoti melting point apparatus and are uncorrected. IR spectra were taken from the FT-IR Affinity-1. NMR spectra were obtained from CDRI, Lucknow, by using a Brucker NMR instrument at 300 MHz. The 1H chemical shifts are reported as parts per million (ppm) downfield from CDCl3. MASS spectra were obtained from CDRI, Lucknow. The electrospray mass spectra were recorded on a THERMO finnigan LCQ advantage max ion trap mass spectrometer.

Step 1: General Method for Synthesis of Tetrahydroquinazolinone By Isatoic Anhydride: Isatoic anhydride (1 mmol), primary amine (1.1 mmol) and aldehyde (1 mmol) was dissolved in ethanol (5 mL) and added catalyst alum (0.15 g, 0.4 mmol) 10. The mixture was heated at reflux for a specified period of time. After completion of the reaction as indicated by TLC (eluent: methanol-chloroform), the solid catalyst was separated by filtration. Water (10 mL) was added, and the precipitated product was filtered and recrystallized from EtOH.

Preparation of Catalyst (Alum): Potash alum is prepared by mixing equi-molecular masses of potassium sulphate and aluminum sulphate in water followed by evaporation.

Step 2: General Method for Synthesis of Mannich Base of Tetrahydroquinazolinone Derivatives: A slurry containing tetrahydro-quinazolinone with formaldehyde added with mixture of ciprofloxacin or norfloxacin dissolved in ethanol (10 ml). The reaction mixture was stirred for 4 h at room temperature and refrigerated for 24 h. The products were separated by suction filtration, vacuum dried, and recrystallized from methanol. The synthetic scheme for the preparation of the Mannich base of tetrahydro-quinazolinone derivatives is given in Scheme 2. The melting point, % yield, and Rf values are given in Table 1.

Possible Structures of Mannich Bases of Tetra-hydroquinazolinones & Its Derivatives (2a-h): 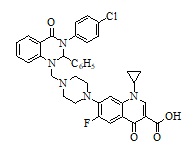 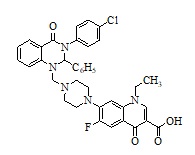 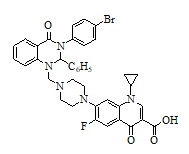 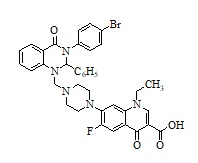 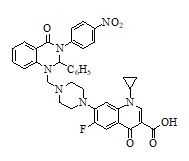 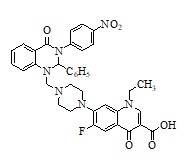 Chromatographic Analysis: Synthesized compounds were characterized by thin-layer chromatography (TLC) using pre-coated aluminum sheets (10 × 2.5 cm) silica gel G 60 plates F 254, and thickness of plates was 250 µm. The pre-coated plates were activated at 110 ºC for 90 minutes in a hot air oven and cooled in a vacuum desiccator on silica gel. The solutions of mannich base of tetrahydroquinazolinones derivatives were prepared by dissolving 1 mg of the pure compound in 5 ml. of acetone and spotted on pre-coated plates with the help of a capillary tube. The plates were run in a pre-saturated TLC chamber using the following solvent systems:

Chromatograms were developed in a TLC chamber saturated with a specific solvent system at 25 ºC. The solvent front was allowed to travel approximately 8 cm. Plates were taken out, air-dried, and exposed to iodine vapor by putting in it iodine saturated chamber. The plates were also seen under the UV chamber 254 nm and 366 nm. The Rf values were calculated using the following formula:

The Rf values of the synthesized compound are summarized in Table 1.

Melting Point Determination: The measurement of the melting point is a measure of concern in pharmaceutical studies. The most important reason to determine the melting point during synthesis is the identification of synthesized compounds.

Capillary Fusion Method: The melting point of synthesized compounds was determined using the capillary fusion method.  Capillary was taken, and one end was sealed by bringing it near the burner flame. The open end of the capillary tube was pushed into a small heap of the compound so that a small plug of the powder was collected in the open end. The tube was tapped gently so that the collected materials settle down.  The capillary tube was placed in the melting point determination apparatus. The temperature at which the compound starts to melt was noted with the help of a thermometer. Data came from M.P. determination by capillary fusion method are given in Table 1

Infrared Spectroscopy: The samples were previously ground and mixed thoroughly with KBr, using a 1% (w/w) dilution. The KBr disks were prepared by compressing the powders under the force of 10 tons in a hydraulic press. Scans were obtained at a resolution of 1 cm-1 from 400-4000 cm-1. The peaks obtained from IR spectroscopy are tabulated in Table 2.

1H-NMR: NMR spectra were obtained from CDRI, Lucknow by using a Brucker NMR instrument at 300 MHz. The 1H chemical shifts are reported as parts per million (ppm) downfield from CDCl3. δ values (in ppm) of the compound are given in Table 3.3, 3.4, 3.5, 3.6, respectively.

Mass Spectroscopy: The electrospray mass spectra were recorded on a THERMO finnigan LCQ advantage max ion trap mass spectrometer. The 10µl samples (dissolve in a solvent such as methanol/ acetonitrile/water) were introduced into ESI source through Finnigan surveyor autosampler. The mobile phase 90:10 Methanol/ACN: H2O flowed at a rate of 250µl/min by MS pump. Ion spray voltage was set at 5.3KV and capillary voltage 34V. The MS scan run up to 2.5 min and spectra’s print outs is averaged of over 10 scans at peak top in TLC. This is done by CDRI, Lucknow m/z value of compound is given in Table 3.

Antimicrobial Screening of Synthesized Compounds by Agar Dilution Method: Microbiological assay (MBA) is defined as the estimation of potency of a growth-promoting (GPS) or growth-inhibiting substance (GIS) by comparing its quantitative effect on the growth of a specific microorganism with that of a reference standard of defined potency 5. The agar dilution susceptibility-testing method is utilized for the determination of the minimal inhibitory concentration (MIC) of an antimicrobial agent required to inhibit the growth of a microorganism 11.

The agar dilution method is the most well-established method for determining antimicrobial susceptibility. It is commonly used as the standard or reference method for the evaluation of new antimicrobial agents and susceptibility test methods. In addition, it offers the convenience of simultaneously testing a number of isolates, being able to detect mixed cultures or heterogeneous populations, and flexibility in antibiotic selection and concentration range to be tested 11.

All equipment was cleaned and sterilized by autoclave method at 12 psi for 30 min. Nutrient agar medium was used for the growth of bacteria.

Test Organisms: The pure cultures of the microorganisms were obtained from Awadh laboratory, Kanpur. The purity of culture was checked frequently during the experiment by the staining method. Nutrient Agar media (CDH) was used to isolate pure strains of bacteria.

Preparation of Control Plates: 12 In addition to preparing antibiotic dilution plates, it was also important to prepare control plates. These plates consist of only the agar-based media with no antibiotic added. Test and standard drugs were not soluble in water; therefore, stock solutions were prepared in Ethanol (99%). Ethanol itself showed antibacterial activity; thus, there was a strong need to prepare control plates of ethanol with the same dilutions. The preparation of these plates was carried out by the same procedure as described in section 3.2.3. A control plate with ethanol dilutions was referred to as +ve control while without ethanol was – ve control.

Assay Method: Antimicrobial activity of synthesized compounds was determined using Agar Dilution Method. The apparatus used was sterilized. The procedure was carried out under laminar airflow to observe strictly sterile conditions. All plates were incubated at 37 ºC for 48 h in for of bacteria.

TABLE 4: ANTIMICROBIAL ACTIVITY OF MANNICH BASES OF TETRAHYDROQUINAZOLINONE & ITS DERIVATIVES (2a-h) BY AGAR DILUTION METHOD: MIC IN µg/mL OF THE SYNTHESIZED TEST AND STANDARD COMPOUNDS 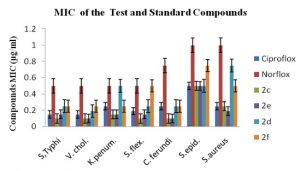 FIG. 1: REPRESENTS THE MIC OF SYNTHESIZED, TEST AND STANDARD COMPOUNDS

Anti-inflammatory Activity (Carrageenan- Induced Paw Oedema Method in Rats): 14 Anti-inflammatory activity was performed by carrageenan-induced paw edema method in rats. Indomethacin (10 mg/kg, i.p) was administered as a standard drug for comparison. The synthesized compounds were administered at 10 mg/kg dose level were administered orally 30min prior to the administration of 0.1 ml/kg body weight of carrageenan in saline (1% w/v) into the lateral malleolus of the sub-planter region of the left hind paw. The paw volumes were measured using the mercury displacement technique with the help of a plethysmograph immediately before and 60 min, 120 min, and 180 min after carrageenan injection. The percentage inhibition of paw edema was calculated by using the following formula, and the results are depicted in Table 5 and Fig. 2. 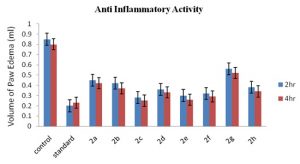 RESULTS AND DISCUSSION: The synthesized compounds were evaluated for antibacterial activity by agar dilution method against Salmonella typhi, Vibrio cholera, Klebsiella pneumonia, Shigella flexnari, Citrobactor ferundi, Staphylococcus epidermidis and Staphylococcus aureus, in the concentration range of 0.05 - 10 µg/ml. MIC of the compounds tested is shown in Table 4 and Fig. 1.

The compounds 2c and 2e are more potent than ciprofloxacin against Salmonella typhi, Vibrio cholera, Shigella flexnari, Citrobactor ferundi, Klebsiella pneumonia, and equipotent to that of ciprofloxacin against Staphylococcus aureus, Staphylococcus epidermidis. Compound 2c is more potent than compound 2e against all these bacteria except Klebsiella pneumonia.

The MIC value of compounds 2c and 2e is lower as compared to the MIC value of compounds 2d and 2f. The potency of ciprofloxacin derivative is higher as compared to norfloxacin derivative against Salmonella typhi, Vibrio cholera, Staphylococcus aureus, Klebsiella pneumonia, Staphylococcus epidermidis, Pseudomonas aeruginosa, Shigella flexnari and Citrobactor ferundi.

Among all the tested compounds, 2c and 2eshowed remarkable anti-inflammatory activity compared to other derivatives. Compounds (2c & 2e) showed the longer duration of action as compared to standard drug indomethacin

ACKNOWLEDGEMENT: The author would like to thanks Dr. Abhinav Prasoon Mishra for his support and also thanks to CDRI Lucknow for tested the samples.