ABSTRACT: Complexes of Manganese(II) of general composition Mn(L)2X2   have been synthesized with ligand 2-heptanone semicarbazone  and 2-heptanone thiosemicarbazone (where L = 2-heptanone semicarbazone or 2-hepatanone thiosemicarbazone and X=Cl-, SO42-, CH3COO-, NCS-, ClO4-) The IR spectral data of ligands indicate the involvement of sulphur/oxygen and nitrogen in coordination to the central metal. The molar conductance of the complexes of the complexes in fresh solution of DMSO lies in the range of 10 -20 ῼ-1 cm2mol-1 indicating their non-electrolyte behaviour thus the complexes may be formulated as [M(L2)X2].Ligands were characterized by Mass, NMR, and IR. All the complexes were characterized by elemental analysis, magnetic moments, IR, electronic and EPR spectral studies. All the manganese (II) complexes in present study show magnetic moment in the range of 5.90-6.05 B.M; corresponding to five unpaired electrons and hence these are high-spin complexes. The Schiff’s base ligands forms hexacoordinated complexes having octahedral geometry for Mn(II).

These metal complexes, especially those containing manganese (II), are more active than the uncoordinated thiosemicarbazones molecules.

MATERIAL AND METHODS: All the chemicals used were of A R grade and produced from sigma Aldrich, Bangalore, India .Metal salts were purchase from E. Merck, India and were used as received

Synthesis of ligand L1:  Ethanolic solution of  0.01 mole semicarbazide hydrochloride (1.11g) and 0.01mole of sodium acetate (0.82g) were dissolved in 50 ml of  distilled water and 0.01 mole  of 2-heptanone (1.42ml) was added to it.50 ml of alcohol was added to this mixture, the reacting mix shaken thoroughly and refluxed for about an hour on a water bath. On cooling, white crystalline semicarbazone separated out. It was filtered washed with ethanol and dried over P4O10.

Synthesis of ligand L2: An ethanolic solution of thiosemicarbazide (0.91g,0.01mol) and ethanolic solution of the 2-heptanone 1.42ml, 0.01 mol were mixed together in equimolar (1:1) ratio a small amount of glacial acetic acid was added and the contents were refluxed on a water bath for about one hour and then concentrated. On cooling in an ice bath yellowish coloured thiosemicarbazone separated out. Analytical data of the ligands L1 and L2 are given in table 1.

Table 1: The analytical data of the ligands

Synthesis of the Complexes: An ethanolic solution of the corresponding ligand (0.1 mol) was mixed with (0.05 mol) of aqueous solution of manganese salt (chloride, acetate, chlorate, thiocynate). The mixture was shaken thoroughly, refluxed for about 1 to 2 hour on a water bath and then cooled, when white crystals appeared. The separated crystals were filtered, washed with 50% ethanol, and finally dried at 60oC in an electric oven. Analytical data for the complexes are given in Table 2.

Analysis: The Carbon and hydrogen were analysed on Carlo-Erba 1106 elemental analyzer .the nitrogen content of the complexes was determined using Kjeldahl’s method. Molar conductance was measured on the ELICO (CM82T) conductivity bridge. Magnetic susceptibilities were measured at room temperature on a gouy balance. Electronic impact mass spectrum was recorded on JEOL, JMS-DX-303 Mass spectrometer. Proton (1H) NMR spectra were recorded on Hitachi FT-NMR model R-600 spectrometer using DMSO as a solvent. Chemical shift are given in ppm relative to tetramethylsilane.IR spectra (CsI) were recorded on FTIR spectrum BX-II spectrometer. The electronic spectra were recorded in DMSO on Schimadzu U mini -1240 spectrophotometer.

RESULTS AND DISCUSSION: The complexes were synthesized by reacting ligands with the metal ions in 2:1 ratio in ethanolic medium .the ligands behaves as bidentate coordinate through sulphur/ oxygen and nitrogen donor atoms. The analytic data, magnetic susceptibility, and spectral analysis agree well with the proposed composition of formed complexes. All the complexes have shown good solubility in DMSO.

The molar conductance of the complexes in fresh solution of DMSO lies in the range of 10-20 ῼ-1 cm2 mol-1 indicating their non-electrolytic behaviour 11.

TABLE 2: ANALYTICAL DATA FOR THE FOR COMPLEXES

IR Spectra: The assignments of the significant IR spectral bands and its metal complexes are presented in Table 3.

Coordination through ʽO ҆ increases double bond character of the ν(C=N) band in all complexes as compared to the ligand. The observation indicates that the 2-heptanone semicarbazone behaves as bidentate ligand.

L2-IR –In principle, the ligand can exhibit thione-thiol tautomerism since it contains a thioamide –NH-C=S functional group. The ν(S-H) band at 2560 cm-1 is absent in the IR spectrum of ligand but ν(N-H) band at ca. 3214 cm-1 is present, indicating that in the solid state, the ligand remains as the thione tautomer. The position of ν(C=N) band of the thiosemicarbazone appeared at 1600 cm-1 is shifted towards lower wave number in the complexes indicating coordinated via the azomethine nitrogen 14, 15.

This also confirmed by the appearance of the bands in the range of 420-473cm-1, this was been assigned to the ν(M-N). A medium band found at 1090 cm-1 is due to the ν(N-N) group of the thiosemi-carbazone. The position of this band is shifted towards higher wave number in the spectra of complexes. It is due to the increase in the bond strength, which again confirms the coordination via the azomethine nitrogen.

The band appearing at ca.832 cm-1 corresponding to ν(C=S) in the IR spectrum of ligand is shifted towards lower wave number. It indicates that thione sulphur coordinates to the metal ion 16. Thus it may be concluded that the ligand behaves as bidentate chelating agent coordinating through azomethine nitrogen and thiolate sulphur 17. Important infrared spectral bands are given in Table 3.

Ligands Field Parameter: Stability of the half-filled d-shell, manganese (II) generally forms high-spin complexes which have an orbitally degenerate 6S ground state term and the spin-only moment of 5.92 B.M. is expected, which is independent of temperature and of the stereochemistry 18.

All the manganese (II) complexes in the present study show magnetic moment in the range of 5.90-6.05 B.M. [Table 4], there by indicating the presence of five unpaired spins and hence these are high-spin complexes.

Electronic spectra of the complexes show weak absorption in the visible region. This suggests a near octahedral geometry around manganese (II) 19. The intensities of octahedral manganese (II) complexes are externally low as a consequence of their doubly forbidden nature. Molar extinction coefficients in the region 10-2-10-1 lcm-1 mo1-1 are commonly observed.

The value of parameter hx for the complexes have been calculated ,using the covalency contribution of manganese (II) ion (0.07), while the numerical value 786cm-1 for the parameter B of free Mn2+  ion has been used to calculate that the value for β. The value of β and hx [Table 6] indicate that complexes under study have appreciable ionic character.

The ESR spectra of the complexes have been recorded as polycrystalline samples and in aqueous solutions (mentioned in figure 1 and figure 2). Polycrystalline complexes gie one broad isotropic signal centred around approximately free electron g-value [Table 4].

In polycrystalline samples, manganese(II) complexes usually give broad signals attributed to forbidden transitions where ΔM ±1 (M =electron spin quantum number) and Δm≠0 (m =nuclear spin quantum number). The broadening of the spectrum in powder sample is analogous to that observed in the case of immobilised free radicals e.g., manganese (II) complex of concanavallin 29.

Broadening due to immobilisation of Mn(II) ion in the complex results because the rotational motion of Mn(II) is highly restricted. Another origin of line broadening is spin – relaxation 30, which is temperature dependent.

The intensity of forbidden transition 31 is inversely proportional to the square of the applied magnetic field, hence their intensities of the allowed signals. This aspect however is not covered in the present studies. 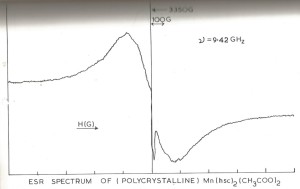 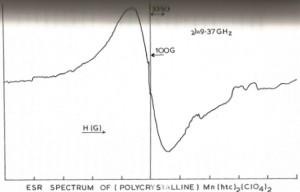