Schiff bases derived from thiosemicarbazide, semicarbazide, and their metal complexes are of great significance for their pharmacological properties such as antimicrobial 4, antifungal 5, antitumor, antiviral 6, 7, anticancer 8-14.

Therefore, the structure of nicotinamide has been the subject of many studies. It is currently in the trial as a potential means of preventing the onset of Type I (insulin-dependent) diabetes mellitus in high-risk, first-degree relatives.

It has been classed as a food additive rather than a drug. Nicotinamide and picolinamide also serve as model compounds for the conformations of polypeptides and nucleic acids. The amide groups in picolinamide and nicotinamide can adopt a variety of tautomeric and rotameric structures in addition to forming interesting molecular associations via hydrogen bonding. Picolinamide (pyridine -2- carboxamide) introduces a novel twist in the carboxamide potential by its ability to form an intramolecular hydrogen bond between the amide and the pyridine ring.

The extensive research has been done in our lab 15 elucidating the coordination behavior of transition metal complexes (3d, 4d, 5d) with thiosemicarbazone which has been proved to be potent antitumor, antiviral, anticarcinogenic, antituberculosis 16, antioxidant, antibacterial activities, bactericidal and fungicidal agents 17, 18.

Synthesis of Ligands: Hot ethanolic solution (20 mL) of pyridine-3- carboxamide and pyridine-2 - carboxamide (0.91g, 0.01mol) was added to a hot ethanolic solution of thiosemicarbazide (1.22g, 0.01mol) in the presence of 0.5 mL acetic acid. The contents were refluxed at 70–80 ºC for about 8-10 hrs on a water bath with constant stirring. On cooling the contents L1 and L3 the yellow-colored compounds were separated. The completion of the reaction was confirmed by the TLC. The solvent was removed using a rotary evaporator, and light yellow colored solid was obtained. It was washed with cold ethanol and dried under vacuum over P4O10, yield 68%, melting point-198-200 ºC, soluble in water Fig. 1. 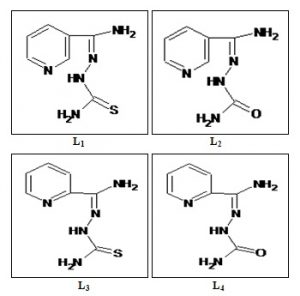 An aqueous solution (50 mL) of semicarbazide hydrochloride (5.55 g, 0.05 mol) added in an ethanolic solution (50 mL) of corresponding amide pyridine -3-carboxamide and pyridine-2- carboxamide (4.75 gm, 0.05 mol) in the presence of sodium acetate (4.1 g, 0.05 mol). The reaction mixture was stirred vigorously for an hour. The crystalline product L2, L4 which formed was collected by filtration in each case washed several times with hot water and dried in vacuum over P4O10 Fig. 1.

The characterization details are tabulated in Table1.

Preparation of Metal Complexes: Hot ethanolic solution of metal salts (1 mmol), cobalt chloride hexahydrate (0.237 g), or cobalt nitrate hexahydrate (0.291 g), was mixed with a hot ethanolic solution of the corresponding ligand (2 mmol) (L1, L2, L3, L4). The mixture was refluxed for 8-10 h at 70–80 ºC. On cooling the contents, the complex separated out in each case. It was filtered, washed with 50% ethanol, and dried under vacuum over P4O10. The characterization details are tabulated in Table 1.

Physical Measurements: The C, H, and N were analyzed on a Carlo-Erba 1106 elemental analyzer. Molar conductance was measured on an ELICO (CM82T) conductivity bridge. Magnetic susceptibilities were measured at room temperature on a Gouy balance using CuSO4⋅5H2O as calibrant IR spectra (KBr) were recorded on an FTIR spectrum BX-II spectrophotometer. The electronic spectra were recorded in DMSO on a Shimadzu UV mini-1240 spectrophotometer.The1H NMR spectrums were recorded on a Jeol FT-NMR Spectrometer using DMSO as a solvent. Thermogravimetry (TG) and Differential thermogravimetric analysis (DTA) for the metal complexes were carried out on a Perkin Elmer Diamond TG-DTA spectrometer for the determination of complex entrapped water.

Physical Properties: The analytical data of the ligands and its complexes with their physical properties are given in Table 1. All the complexes have shown good solubility in DMSO but they were found insoluble in ether, water, acetone, and benzene. The interaction of the ligand with metal salts in 1:1 molar ratio in EtOH yielded stable solid.

The assignments of the significant IR spectral bands of the metal complexes are shown in Table 2 which clearly show the shifting of the bands corresponding to ? (–C=N), (–C=S) and [?(C=O)] in ligands towards the lower side (around ca. 20–50 cm−1) on complexation. This suggests that the ligands act as bidentate chelating agent coordinating through the nitrogen of C=N group, sulfur of C=S group and oxygen of C=O.

TABLE 2: IMPORTANT IR BANDS AND ASSIGNMENT OF SEMICARBAZONE AND THIOSEMICARBAZONE BASED LIGANDS AND THEIR CO (II) COMPLEXES

Electronic Spectra and Magnetic Moment: The magnetic moments of all the Co II complexes lies in the range 4.89-5.02 BM corresponding to three unpaired electrons. This indicates that the coordination takes place through the nitrogen atoms of the imine group, sulfur atom of >C=S, oxygen atom of >C=O group which corresponds to octahedral symmetry Table 3.

Thermal Analysis of Metal Complexes: Crystal water content in complex [Co (L1)2Cl2] (1) and its thermal stability was determined by the TGA and DTG techniques Fig. 2. The metal complex (1) show major weight loss above 133 ºC which shows that it is free of any entrapped water. The data obtained for other complexes was reprehensible. The complex (1) decomposes in two steps by oxidative degradations; in the final step (>690 ºC) results in the metallic oxide Co3O4 as stable residue. Data from the thermal analysis sustains the molecular formulas assigned for these complexes. It shows a total mass loss of 85.6% at 133-280 ºC, 50.9% at 280 ºC, 14.39% at 690 ºC. 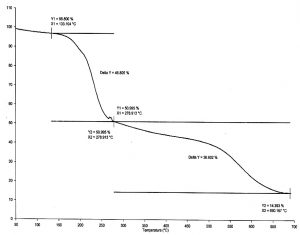 Suggested Structure of the Complexes: On the basis of the above spectral studies the following structure may be suggested for the complexes Fig. 3, 4. 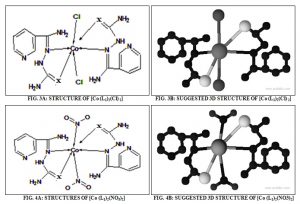 CONCLUSION: The present work describes the facile synthesis of metal complexes with newly synthesized ligands. Spectral data confirms that the ligands are bidentate and metal complexes have distorted octahedral geometry which may be formulated as [Co (L)2X2] (where L = L1, L2, L3, L4; X=Cl-, NO3--,1/2SO42-). An interesting fact is that the ligand being water-soluble can be further studied for their applications as chelating agents, work for which is being carried out in our lab.