Gastro-intestinal (GI) toxicity is the common adverse effect which has been associated with most of NSAIDs available in the market. So the search for new therapeutic agents with high margin of safety and freedom from normally associated GI toxic effects has been a priority of pharmacologists and pharmaceutical industries. There are virtually limitless series of structurally novel heterocyclic compounds with a wide range of physical, chemical and biological properties. Literature survey reveals that coupling of two or more biodynamic molecules resulted in the enhanced biological activity. The present work embodied here involves synthesis and evaluation of analgesic and anti-inflammatory activities of some bis (indolyl) methane derivatives.

INTRODUCTION: Bis (indolyl) methanes, indole and their derivatives are known as important intermediates in organic synthesis and pharmaceutical chemistry and they exhibit various physiological properties. Indole ring system is the most important heterocycle available in natural compounds. Owing to great structural diversity of biologically active indoles, it is not surprising that the indole ring system has become an important structural requirement in many pharmaceutical agents.

Indole has been widely identified as a privileged structure or pharmacophore, with its presence in over 3000 natural isolates 1 which are known to possess broad spectrum of biological activities and pharmaceutical applications 2. Indomethacin 3 and tenidap 4 are indole derivatives found to possess anti-inflammatory activity with analgesic and anti-pyretic properties. They inhibit production of ecosanoids by inhibition of cyclo-oxygenase (COX) and thereby reduce edema. Several indole derivatives are reported to have anti microbial activity.

Therefore synthesis of bis (indolyl) moiety has become interesting target for the synthetic organic chemist in view of their immense biological and pharmaceutical activities.

The survey of literature revealed that bis (indolyl) methane moiety has valuable biological activities and can be used for as an intermediate for synthesizing various heterocyclic moieties.

Compounds with electron releasing groups such as methoxy and hydroxyl group showed good anti-inflammatory and antimicrobial activity than those which do not have such groups. Compounds having pharmacophore such as chloro, fluoro, and bromo groups have exhibited best anti-convulsants 11, anti-inflammatory 12, anticancer 13, antitubercular 14, anti-bacterial activity 15, antifungal 16, and antihistaminic 17. From the above discussions it may be concluded that the modifications in bis (indolyl) moiety displayed valuable biological activities and these modifications can be utilized to develop potentially active agents.

Most of the analgesic and anti-inflammatory drugs or NSAIDs available in the market are highly acidic in nature and having a common drawback of gastro intestinal toxicity 18. So, there will be a search for new therapeutic agents with high margin of safety and which are free from generally associated G.I toxic effects such as ulceration, hemorrhage and perforation. In particular, bis (indolyl) methanes have received much attention in recent years 19.

In the light of these observations, few bis (indolyl) methane derivatives were synthesized with the objective of developing safer and potent analgesic and anti-inflammatory agents.

MATERIALS AND METHODS: All chemicals used were of laboratory grade and were procured from Merck specialities Pvt. Ltd. and Sisco Research Laboratories (SRL). Melting points were determined by Melting Point apparatus (Veego, Model No. MP I). The TLC plates were prepared by using Silica gel-G. The spots were visualized by exposure to iodine vapor and UV light.

Synthesis of Bis (Indolyl) Methane Derivatives: To a mixture of indole 0.293g (2.5 mmole), substituted aldehydes 1.25 mmole in methanol: water (1:1), sodium bisulfite 20 mmole % (1.89g in100ml water) were added and stirred at room temperature for half an hour. When the reaction was complete, it was extracted trice with dichloromethane (10 ml), the combined organic layer was dried using anhydrous sodium sulphate, filtered and solvent was evaporated. The crude products were purified by column chromatography over silica gel (ethyl acetate: petroleum ether, 4:6 v/v). A total number of five Bis (Indolyl) Methane derivatives were synthesized and summarized in the table 1. 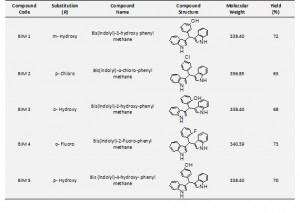 Animals were observed individually after dosing at least once during the first 30 minutes, periodically during the first 24 hours, with special attention given during the first 4 hours and daily thereafter, for a total of 14 days. After carrying out the acute toxicity study of all the test compounds, it was found that the entire compounds in the present investigation were non-toxic up to 1000mg/kg body weight.

RESULTS AND DISCUSSION: A new series bis (indolyl) methane derivative have been synthesized and screened for their analgesic and anti-inflammatory activities. Various physico-chemical data of the synthesized compounds obtained are recorded in the table 2.

*Solvent system of TLC-hexane: ethyl acetate :: 9:1 for all the compounds.

The UV λmax (nm) values of synthesized compounds are given in Table 3 along with characteristic FTIR absorption bands of different functional groups and m/z values of the intense peaks with abundance. The 1H- and 13C-NMR spectral data are also assigned in the table 3.

The percentages of analgesic activity of the synthesized compounds at three different doses calculated are listed in the Table 4. 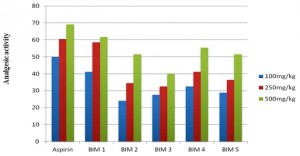 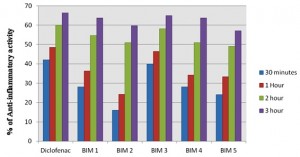 CONCLUSION: Synthesis and study of acute toxicity, analgesic and anti-inflammatory activity of bis (indolyl) methanes in mice and rats have been carried out and described here. In acute toxicity study, no mortality was observed in the test compounds. The compounds were found safe in between the dose of 100 mg/kg to 1000mg/kg. However, further detailed toxicological investigations are required particularly to elucidate their chronic toxicity.

The results obtained clearly indicate that the synthesized compounds possess significant analgesic as well as anti-inflammatory activity at a dose of 500 mg/kg. Among the five synthesized compounds, the compounds BIM 1 (61.73%), BIM 2 (51.45%), BIM 4 (55.31%) and BIM 5 (51.53%) showed significant analgesic activity as compared to the standard Aspirin, whereas compound BIM 3(39.88%) have shown moderate activity.

Hence, it is concluded that BIM-1 and BIM 4 might be attractive candidates for further development as they are the most active compounds among the compounds that have both analgesic and anti-inflammatory activities.

The experimental details of the scheme of synthesis of the compounds reported here have been carefully documented, so that it may pave the way for researchers in their effort to make new analgesic and anti-inflammatory compounds in future.