ABSTRACT: The compound 3-chloro-2-hydrazine quinoxaline was condensed with 2-furaldehyde to derive a Schiff base 2-furaldehyde-2-(3-chloro-2-quinoxalinyl) hydrazone (FCCQH).The ligand and also its complexes with VO (IV), Cr (III), Mn (II), Fe (III), Co (II), Ni (II), Zn (II), and Pd (II) have been synthesized and characterized by elemental analysis, magnetic studies, thermal analysis, infrared spectra, UV-visible spectroscopy and Electron Spin Resonance data. The ligand 2-furaldehyde-2-(3-chloro-2-quinoxalinyl) hydrazone [FCCQH] acts as a neutral, bidentate one towards VO(IV), Zn(II), and Pd(II) coordinating through free C=N nitrogen and oxygen of furan ring and as tridentate one towards Cr(III), Mn(II), Fe(III), Co(II), and Ni(II) complexes coordinating additionally through nitrogen of quinoxaline ring C=N. The complexes have been screened for antibacterial activity towards staphylococcus aureus (gram +ve), Escherichia coli (gram -ve) bacteria, antifungal activity towards fusarium oxysporum and anticancer activities of the compounds were evaluated by MTT assay on HeLa (cervical cancer) cell lines. While the antimicrobial activity profiles of the complexes are, by and large quite encouraging, the anticancer activity exhibited by Ni (II) and Pd (II) complexes are highly impressive.

INTRODUCTION: Quinoxalines are a class of fused six-membered nitrogen heterocyclics containing two nitrogens in mutually para dispositions. These compounds have a wide range of applications in pharmacology, bacteriology and mycology 1-5. Quinoxaline and its derivatives have received attention as complexing agents owing to the presence of two potentially metal binding nitrogen centers at 1,4 positions 6- 13. Schiff bases constitute a special class of compounds; these compounds have played a central role as chelating agents for a large number of metal ions and are further associated with a variety of applications. They are also used in pigments, dyes and polymer industries.

In biological front, these serve as model compounds of several vitamins and enzymes 14, 15 and have also been projected as promising pesticides, fungicides and bacteriocides. These compounds, in addition, possess a wide spectrum of medicinal properties and have been found to be active against influenza, leprosy, tuberculosis, malaria, and certain kinds of cancer.

The biological activity of organic compounds having potential donor sites is often attributed to their ability to chelate metal ions present in the biosystem; in many cases, the metal ion association exerts a synergistic effect on the activity of the free ligand.

Despite the fact that these compounds and their derivatives have potent donor groups, the studies directed towards exploring the ligational behaviour of them are limited. Hence, we report, herein, the synthesis and characterization of VO(IV), Cr(III), Mn(II), Fe(III), Co(II), Ni(II), Zn(II), and Pd(II) complexes with 2-furaldehyde-2-(3-chloro-2-quinoxalinyl) hydrazone [FCCQH] (Fig.1), followed by their screening for antimicrobial and anticancer activities.

The elemental analyses were carried out by Carlo Erba 1108 elemental analyser at CDRI, Lucknow, India. Conductance measurements were made in DMF at 10-3 M concentration on a Digisun digital conductivity meter DI 909 model calibrated with 0.1 M KCl. The magnetic susceptibilities of the complexes were recorded on a Faraday balance (CAHN-7550-03) at room temperature using Hg [Co (NCS) 4] as the standard.

Preparation of the ligand:

3-Chloro-2-hydrazinequinoxaline (I) was prepared according to a reported method. The ligand FCCQH was synthesized by adding I (0.01mole) in small lots to a stirred solution of 2-furaldehyde (0.01 mole) (Fluka) in DMF (10 ml) at room temperature. On completion of addition, a clear solution was obtained and on continuous stirring for a further period of 2 hours, a bulk yellow coloured compound was obtained which was filtered, washed with water and recrystallized from CHCl3 and hexane. Melting point: 128-130oC

Preparation of the metal complexes:

Nutrient agar medium (M001) was obtained from Himedia, Mumbai and agar-agar from Bacto, Mumbai.  Stainless steel borer of 0.6 mm diameter was used for making cups in the experiment.  Nutrient agar medium was sterilized at 15 psi pressure for 20 min, in an autoclave at 1210C.  Petri plates were sterilized in hot air oven at 1600C for one hour. Test organisms used for antibacterial screening were: Staphylococcus aureus (gram +ve) (MTCC-96) and Escherichia coli (gram –ve) (MTCC-118).

Sterilized nutrient agar medium (100ml) was cooled to around 400C.  It was seeded with 50ml of 18h test organism.  To each of the labelled petri plates, 27ml of the medium was transferred.  The medium was allowed to solidify by allowing the plates in the laminar air flow bench for 30 min.  Solutions of standard and test substances (50ml) were added into the cups.  The plates were kept at room temperature for 2.5 hours to facilitate diffusion of the substances from the cups.  The petri plates were then kept in inverted position in an incubator maintained between 32-350C, for 18 h.  After the incubation period, the plates were observed for zone of inhibition.

Asthana and Hawkers medium (Glucose 5.0g, KNO3 3.5g, KH2PO4 1.75g, MgSO4 0.75g Agar-Agar 20.0g and a pinch of Rose Bengal) was taken and sterilized at 15 psi for 15 min.  Then, the compound (0.1mg/ml acetone) was added in aseptic conditions in each petri plate.  Sterile petri plates were allowed to cool for solidification.  After solidification, the test fungus was inoculated in the center of the petri plate.  After 3 days, the growth of the organism was recorded. A control was maintained without adding the test compounds.  The activity of the compound was assayed by comparing the growth of the fungus in the compound and in the control.

The anticancer assay of the compounds at concentrations 3mg/ml and 30mg/ml against A2780 ovarian cancer cell line was made employing MTT (3- (4, 5 – dimethylthiazole – 2 - yl) – 2, 5 -diphenyl-tetrazoliumbromide) assay.

MTT (3- (4, 5-dimethylthiazole - 2-yl) - 2, 5 -diphenyltetrazoliumbromide) measures the metabolic activity of the viable cells.  The assay is non-radioactive and can be performed entirely in a micro titer plate (MTP). It is suitable for measuring cell proliferation, cell viability or cytotoxicity. The reaction between MTT and ‘mitochondrial dehydrogenase’ produces water-insoluble formazan salt.  Procedure involves culturing the cells in a 96-well micro titer plate, and then incubating them with MTT solution for approximately 2 hours.  During incubation period, viable cells convert MTT to a water-insoluble formazan dye.  The formazan dye in the MTP is solubilized and quantified with an ELISA plate reader.  The absorbance directly correlates with the cell number.  This is applicable for adherent cells cultured in MTP.

The magnetic studies made on the complexes indicate that VO(IV), Cr(III), Mn(II), Fe(III), Co(II), and  Ni(II) complexes are paramagnetic corresponding to one, three, five, five, three and two unpaired electrons respectively and that the Zn(II) and Pd(II) complexes are diamagnetic (Table:1

TABLE 1: PHYSICO-CHEMICAL CHARACTERISTICS OF SCHIFF BASE LIGAND AND ITS METAL COMPLEXES

The structures of the compounds have been appropriately characterized and confirmed using spectroscopic data.

Further, a small intensity band at 887 cm-1 in the ligand due to ν C-O has been lower shifted by about 20 cm-1 in all the complexes indicating that furan oxygen is involved in coordination. This suggests that the ligand acts as a neutral, bidentate one bonding through nitrogen of azomethine group and oxygen of furan ring in VO(IV), Zn(II) and Pd(II) complexes and as a tridentate one coordinating additionally through nitrogen of quinoxaline ring C=N in Cr(III), Mn(II), Fe(III), Co(II), and Ni(II) complexes.

tetrahedral geometry for the d10 Zn (II) complex  have been proposed. Further, the ligand field parameters: 10 DQ, B and β obtained for the Co(II) and Ni(II) complexes indicate that the metal-ligand bond in them is covalent in nature.

TABLE 3: ELECTRONIC SPECTRAL DATA OF THE METAL COMPLEXES OF FCCQH

The ESR spectral parameters calculated for the VO(IV) complexes using appropriate methods and equations are presented in Table-4. The spectrum of the VO(IV) complex is well resolved with eight parallel and eight perpendicular components due to hyperfine coupling with vanadium nucleus having I = 7/2. The g and A values observed for the VO(IV) complex is in agreement with those generally for a vanadyl complex with a square pyramidal geometry with g||< g┴< ge (where ge is free electron value) indicating that the unpaired electron is in the dxy orbital with 2B as the ground state.

In vitro antibacterial activity of compounds was evaluated by seeded plate technique against two strains 1) Staphylococcus aureus (gram +ve) (MTCC-96) and 2) Eschrichia coli (gram -ve) (MTCC-118), using streptomycin as the standard. The compounds were tested at each of concentrations 0.1mg/ml and solubilized in DMSO and were prepared by dilusion with acetone.

In vitro antifungal activity of compounds was evaluated by seeded plate technique against fungus Fusarium Oxysporium using Flucanozole as the standard. The compounds were tested at concentration 0.1mg/ml in DMSO.

TABLE 6: ANTIFUNGAL ACTIVITY OF THE COMPOUNDS

The results indicate that the Pd is more cytotoxic than the Ni complexes. 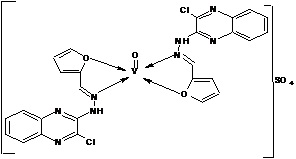 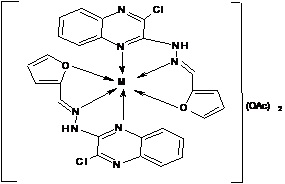 FIG 3: STRUCTURE OF Mn(II), Co(II) and Ni(II) COMPLEXES OF FCCQH 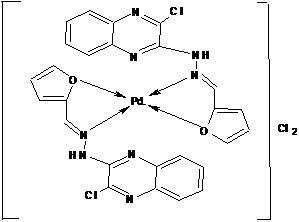 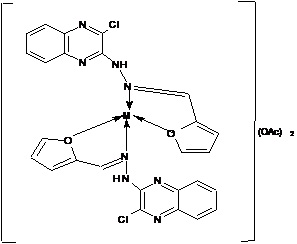 ACKNOWLEDGEMENTS: The authors are thankful to the principal, University College, Kakatiya University, Warangal for providing all the research facilities and to the Principal, Chaitanya Degree, P.G., Pharmacy College, Warangal for according permission to the authors to pursue the research work. The authors are also thankful to RSIC, CDRI, Lucknow for C, H, N data, Central instrumentation center, Kakatiya University for recording IR and Electronic spectra and RSIC, IIT Madras for recording ESR spectra and magnetic data.