ABSTRACT: We have synthesized some new pyridazine-3-one derivatives and characterized by means of IR, NMR & mass spectral data. Compounds were evaluated for in-vitro antibacterial activity by disc diffusion method and further subjected to molecular properties prediction and drug-likeness by Molinspiration software. All compounds were found in compliance with Lipinski ‘Rule of Five’ and presented a good drug-likeness score with no violations. Compound I and IV having substitutent (6-phenyl, 6-chloro phenyl) has documented good antibacterial activity against S. aureus & S. epidermidis. Compound III & V (4’-chloro-benzylidine, 4’-methoxy-benzylidine)has reported good activity against P. aeruginosa & E. coli.

INTRODUCTION: Many potent drugs derived from synthetic as well as natural sources, commonly in practice contain nitrogen in the heterocyclic ring system. Based on the observation of natural products having potent pharmacological activity, attempts with successful results are in progress for more than 150 years now, regarding the synthesis of new nitrogen based heterocycles with the hope to obtain more potent drugs and in many cases the results have been quite rewarding.

Considerable interest has been attracted towards the pyridazine-3-one scaffold and its derivatives due to their widespread applications such as anticonvulsant activity 1, antimicrobial activity 2, antiviral activity 3, anticancer 4 and analgesic activity 5.

MATERIALS AND METHODS: Melting points were determined on Perfit melting point apparatus by open capillary method and are uncorrected. UV spectra were recorded on Beckman DU-64 spectrophotometer in methanol. The IR spectra were recorded as KBr pellets on Hitachi-270 spectrophotometer. The Proton Resonance Spectra (1H-NMR) were recorded on Bruker DRX-400 spectrometer (Chemical Shift in ppm) in CDCl3/DMSO as solvent and TMS as internal standard. The purity of the compound was checked by TLC using different solvent systems

All the solvents and reagents used were of laboratory grade (LR). All the reactions were monitored by TLC using Toluene : Ethyl Acetate: Formic Acid (5:4:1) as solvent system. Iodine chamber was used for visualization of TLC spots. Anhydrous sodium sulphate or potassium carbonate was used for drying various solvents.

The physicochemical parameter and bioactivity of the compounds were calculated by Molinspiration software.

Step 1- Synthesis of Benzoyl Propanoic Acid derivatives: After suspending anhydrous Aluminium Chloride (12 g) in dry substituted benzene (100ml) under anhydrous conditions, the contents were refluxed on a water bath. Succinic anhydride (14 g) was then added in small proportion through condenser with continuous stirring. Stirring and heating were continued for 6 hours and left for overnight at room temperature. The contents were then poured into ice-cold hydrochloric acid (2.5% v/v). The aqueous solution was concentrated to a small volume by evaporating on a water bath to obtain the crude compounds. Yield 72%,   m.p.125-126oC.

Step 2- Synthesis of 6-substituted-phenyl-4,5-dihydro-pyridazine-3(2H)-one derivatives: The Benzoyl Propanoic Acid derivatives (1gm) in methanol added with Hydrazine Hydrate (1ml) and added Sodium acetate (0.5 g) refluxed at least for 10 hours. After completion of the reaction, methanol was distilled off and then the concentrate was poured into ice-cold water. Solid was formed, which was recrystallized with alcohol to get the compound. Yield 50%, m.p. 251-2520C.

Step 3- Synthesis of 4-arylidine-6-substituted-phenyl-4,5-dihydropyridazine-3(2H)-one derivatives (I-VI): The compound (1gm) was refluxed for 10 hours with aromatic aldehydes (1 ml) in methanol containing sodium hydroxide (0.5g). Contents were concentrated, then poured into ice-cold water, filtered and recrystallized to get the crystals.

Molecular properties prediction:Physicochemical parameter such as TPSA, MW, Drug Likeness & MiLogP (octanol/water partition coefficient) is calculated by the methodology developed by Molinspiration software. These parameters play a vital role in generation and determination of bioactivity of chemical entity.

Drug Likeness:Drug likeliness is a qualitative means of analysis to check whether the given molecule is a drug or not and it is defined as a complex balance of various molecular properties and structural features which determine whether a particular molecule is similar to the known drugs. Activity of all test compounds and standard drug (Ampicillin) were analyzed under six criteria of known successful drug activity in areas of GPCR ligand, ion channel modulator, kinase inhibitor, nuclear receptor ligand, protease inhibitor and enzyme inhibitor by the molinspiration software.

Chemistry: The synthesis of final 4-arylidine-6-substituted-phenyl-4,5-dihydropyridazine-3(2H)-onederivatives (I-VI) was achieved by refluxing  dry substituted benzene, succinic anhydride in the presence of anhyd. aluminium chloride to yield benzoyl  propionic acid derivatives. Then this was refluxed with hydrazine hydrate to yield 6-substituted-phenyl-4,5-dihydro-pyridazin-3(2H)-one derivatives as an intermediate. This intermediate was refluxed with aromatic aldehydes to afford final compounds (I-VI), Figure 1. All the synthesized compounds were characterized by the IR, NMR spectra in Table 1. 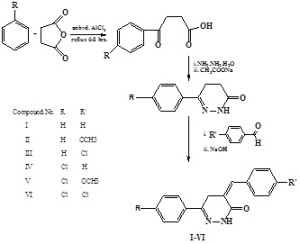 Drug likeness prediction of compounds I-VI along with the standard compound Ampicillin was tabulated in Table 3.

According to Lipinski rule of five8, most "drug-like" molecules have logP <= 5, molecular weight <= 500, number of hydrogen bond acceptors <= 10, and number of hydrogen bond donors <= 5. Molecules violating more than one of these rules may have problems with bioavailability 9. On close inspection of Table 3, all molecules were found in compliance with Lipinski rule of five recommendations for new chemical entity to have good bioavailability with no violations.

The Milog P valve of all compounds were found below five, suggest that the molecules have good permeability across the cell membrane which in turn is needed for generation of bioactivity.

In respect of TPSA, all the compounds were within the limit i.e. 160 Å which implies that molecules are fulfilling the optimal requirement for drug absorption.

On the basis of effective pharmacomodulation and further optimization, present work may be fruitful for ongoing work in antibacterial chemotherapy.