ABSTRACT: The ligands bis-(benzimidazolyl)pyridine (BBIP) and bis-(benzimidazolyl)benzene (BBIB) have been used to synthesize Copper(II) complexes [Cu(BBIP)2]Cl2 and [Cu(BBIB)2]Cl2 respectively. The complexes are characterized by analytical and spectral (FTIR, 1H NMR and electronic) techniques. IR spectra of complexes show that the tertiary nitrogens in the ligand are involved in the co-ordination to the metal ion. An octahedral geometry has been suggested for the complexes and the molar conductance values reveal them to be 1:2 electrolytes. The TGA curves of the complexes[Cu(BBIP)2]Cl2 and [Cu(BBIB)2]Cl2 show no mass loss upto 200°C which indicates the absence of lattice as well as co-ordinated water. The ligand BBIP and [Cu(BBIP)2]Cl2complex exhibit good antifungal and antibacterial activity against Candida albicans and Staphylococcus aureus (gram positive), Escherichia coli (gram negative) respectively, by using modified Kirby-Bauer disc diffusion method. The screening results for anti-proliferative activity for the MCF 7 breast cancerous cells show promising activity. The [Cu(BBIP)2]Cl2 complex has enhanced growth inhibition in a dose-dependent manner

INTRODUCTION: N-heterocyclic ligands have recently become more and more attractive in homogeneous catalysis and organic synthesis, because their organometallic complexes usually exhibit higher reactivity and better stability than those with phospheneligands 1.

Benzimidazole is an important pharmacophore and chelating ligands containing benzimidazolyl group are receiving attention of the co-ordination chemists. Benzimidazole is also a structural unit of naturally occurring nucleoside due to which it easily interacts with the biopolymers of living system.

This character is responsible for its numerous biological aspects like anthelmintic 2, antifungal 3, antimicrobial 4, antineoplastic 3 activities. The incorporation of this nucleus is an important synthetic strategy in studies of antimicrobial drug discovery.

This project is aimed at synthesizing tridentate ligands containing benzimidazole group attached to pyridine/benzene unit. These ligands belong to the class called Pincer ligands and are represented as,

The ligand was synthesized according to the reported procedure 9. o-Phenylene diamine (6.34g, 58.7mmol) and pyridine-2,6-dicarboylic acid(4.59g, 27.5mmol)/isophthalic acid (8.1g, 27.5mmol) were suspended in phosphoric acid (55 mL, 85%). The reaction mixture was stirred at 205˚C for about 6 hours. The solution was cooled to room temperature and was poured into a beaker containing 400mL ice water. The precipitate formed was filtered and added 10 % hot aqueous Na2CO3 solution. Filtered and added to hot methanol saturated with Na2CO3. The solution was diluted with100mL of water and acidified with 15% HCl. The precipitate was extracted with hot methanol and evaporated to produce pure ligand.

The hot solution of the ligands BBIP / BBIBin methanol: chloroform mixed solvent (1:1, 20ml, 10mmol) was added to the solution of corresponding metal salt 2:1 (Ligand: metal) in the same solvent. The reaction mixture was stirred well, refluxed for 2h and left overnight. The complexes formed on standing were collected by vacuum filtration, washed several times with cold methanol and then dried in vacuum over anhydrous CaCl2.

Microanalysis of carbon, hydrogen and nitrogen in the synthesized complexes were carried out using Elementar Vario EL III. The percentage of metal in the complexes was estimated gravimetrically as their oxides by fusion with Anala R ammonium oxalate. Molar conductances of 10-3 M solutions of the complexes in DMSO were measured on EQ660A digital conductivity meter. Magnetic susceptibility measurements were carried out using Gouy balance at room temperature. The thermograms were recorded in dynamic nitrogen atmosphere (flow rate 20mL/min) with a heating rate of 10 K/min using a Perkin Elmer (TGS-2 model) thermal analyzer in the temperature range of ambient temperature to 900oC under stable air condition.

IR spectra of bis benzimidazolyl pyridine/benzene and their metal complexes were recorded in the range 400to4000 cm-1 on a Shimadzu FTIR–8400S spectrophotometer as KBr discs. The electronic absorption spectra were recorded on a UV 3000+ spectrophotometer (cell length, 1 cm) in the 200 – 800 nm range. DMSO (spectral grade) was used as a solvent. The 1H NMR spectra of the samples were carried out in Bruker Avance III model instrument 400MHz in DMSO-d6.

The complexes are coloured solids and stable in air and moisture. They are soluble in DMSO, but insoluble in water, ethanol, methanol, and chloroform. The physical data of the ligands and complexes are given in Table 1.

On the basis of analytical data (Table 2) the complexes were found to have 1:2 (metal:ligand) stoichiometry.

TABLE: 1 PHYSICAL DATA OF LIGANDS BBIP, BBIB AND THEIR COMPLEXES

The binding mode of the ligands BBIP and BBIB to the metal in the complexes has been studied by comparison of IR spectra of the ligands and complexes (Fig.1). Table 3 summarizes the most important IR peaks, the corresponding assignment and the frequencies.

In free ligands (bis benzimidazolyl pyridine (BBIP) and bis benzimidazolyl benzene (BBIB)), band characteristic of benzimidazole ring is observed at 1597 cm-1 11. A medium to weak band around 3154cm-1, 3325cm-1is attributed to NH bonds. The νC=N and νC=C vibrations are very close to each other and occur around 1620 cm-1 and 1654 cm-1as weak to medium intensity band in the uncoordinated ligands. The νN-H mode of the ligands remains unaffected on complexation and occur in the range 3500-3100 cm-1.

The C=N stretching occurring around 1620, 1654 cm-1 in the ligands BBIP and BBIB, undergoes a shift to shorter wavelength and become broad and appears in the range 1600 cm-1 and 1620 cm-1 which shows that the imidazole tertiary nitrogen is involved in the co-ordination. These results suggest the tridentate NNN and NCN co-ordination of BBIP and BBIB which is in accordance with that reported elsewhere.12, 13 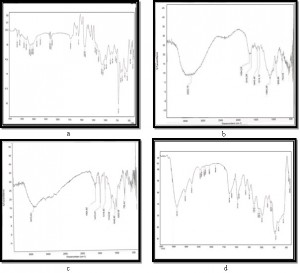 The free ligands (BBIP and BBIB) displayed two absorption bands at 263 nm and 307nm/297nm ranges. The shorter wavelength band is attributed to the high energy π-π* transition in the aromatic moiety. The longer wavelength band is assigned to the n-π* transition of C=N group. In the spectra of the complexes an intense band is observed around 290 nm and 350 nm. This band may be assigned to t2(M)        π*(L) charge transfer transition. 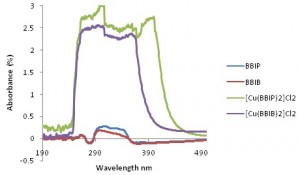 FIG. 2: UV SPECTRUM OF BBIP, BBIB AND THEIR METAL COMPLEXES

The electronic spectra of Cu(II) complexes [Cu(BBIP)2]Cl2 and [Cu(BBIB)2]Cl2(Fig.2) showed two bands in the range (400nm, 359 nm) and (359 nm , 318 nm) which are assigned to 2T2g2Eg and charge transfer transitions respectively and represent an octahedral geometry around the central metal ion13 (Table 4).

TABLE 4: ELECTRONIC SPECTRAL DATA OF BBIP, BBTP AND THEIR COMPLEXES

The room temperature µeff was found to be 1.75-1.73 BM confirming the presence of one unpaired electron for the d9 system of copper (II).

The 1H NMR spectra were recorded for one of the ligands - bis-(benzimidazolyl) pyridine and for its copper complex in DMSO-d6 as solvent.

It is observed that the NH proton signal does not disappear in the copper complex (Fig.3b) and all other proton signals still exist at the same positions which shows that the -NH group of the benzimidazole ring is not involved and no deprotonation and bonding of NH- nitrogen occurs with the Cu2+ ion

From thermal analysis, the properties, nature of intermediates and final products of thermal decomposition of co-ordination compounds can be obtained. From TGA curves of the chelates, mass loss was calculated for the different steps and compared with those calculated theoretically for the proposed formulae based on analytical, spectral and molar conductance measurements. The observed and calculated mass losses of residues and temperatures observed in each step based on TGA and DTA curves are given in Table 5. 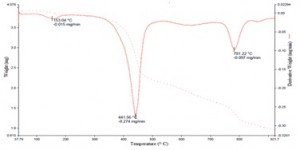 The TGA curves (Fig.4) of the complexes show no mass loss upto 200°C which indicates the absence of lattice as well as co-ordinated water.

The [Cu(BBIP)2]Cl2 complex decomposed in three steps. First step appeared in the temperature range 220-250°C may be due to elimination of the chloride ions. The second step observed in the temperature range 300-350°C was associated with an endothermic peak, may be due to the decomposition of organic species corresponding to 32% mass loss of two benzimidazole moieties. The third step of decomposition observed between 500-540°C may be attributed to the loss of two pyridine rings with the mass loss of 21% as against the theoretical value of 20.34%. Finally the complex undergoes complete decomposition of the organic portion resulting in the formation of CuO as final stable product with residual mass of 10% (Calculated 10.501%).

The Cu(II) complex with BBIB ligand undergoes decomposition by two steps. First step occurring in the temperature range of 400-460ᴼC which may be due to the loss of two benzimidazole rings + two chlorine. The second stage of dissociation accounts for the loss of pyridine unit around 780ᴼC with a mass loss 11% as against the calculated value 10.197%. The complex then undergoes slow decomposition of the remaining ligand parts to give the metal oxide CuO with a mass of 10%.

The ligand BBIP and its complex [Cu(BBIP)2]Cl2 were tested for their in-vitro antibacterial and antifungal activities. The bacterial sub culture Staphylococcus aureus (gram positive) and Escherichia coli (gram negative) were used for antibacterial test whereas Candida albicans was used for antifungal test using modified Kirby-Bauer disc diffusion method 14. The medium used is Muller-Hinton agar with 2% glucose. The diameter of the zone of inhibition was measured 24 hours after incubation at 37°C. Antibacterial and antifungal activities were estimated on the basis of the diameter of the zone of inhibition formed around the paper discs on the seeded agar plates.

The activities of the compounds were compared with those of standards such as ciprofloxacin for antibacterial and clotrimazole for antifungal activity (Table 6).

The complex showed moderate antifungal activity compared with clotrimazole whereas the ligand showed only 50 % activity. 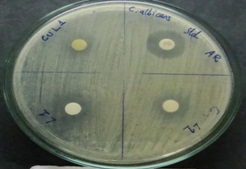 In this study the [Cu(BBIP)2]Cl2 complex was evaluated for its cytotoxic activity against breast cancer cells by MTT assay method.15

The MTT cell proliferation assay has been widely accepted as a reliable way to measure the cell proliferation rate. The data obtained by the MTT assay show that the copper(II) complex has inhibitory effects on the growth of  MCF-7 breast cancer cells in dose- dependent manner as shown in Table 8. The metal complex has much more pronounced antiproliferative activity towards the cancer cells than the normal cells(NIH-3T3) and show IC50 values of 9.9 and 158.9 µg for cancer and normal cells respectively.

Breast cancer cells have been shown to be very sensitive to additional oxidative stress produced by the complex due to their down-regulated antioxidant defense enzymes leading generally to apoptotic death 16. The graphical representation is given in Fig.7.

SUMMARY AND CONCLUSION: From the spectral and analytical data an octahedral geometry has been proposed for the complexes with 1:2 metal:ligand stoichiometry. The complexes showed good cytotoxic activity against MCF 7 breast cancer cell.

ACKNOWLEDGEMENT: The authors thank PSGR Krishnammal College for Women, Coimbatore, Tamilnadu, for the facilities made available.