Categories Menu
Home » SYNTHESIS, CHARACTERIZATION AND ANTI-MICROBIAL ACTIVITIES OF SOME METAL COMPLEXES WITH SCHIFF BASE DERIVED FROM SUBSTITUTED SALICYLALDEHYDE AND AMINO ACIDS

SYNTHESIS, CHARACTERIZATION AND ANTI-MICROBIAL ACTIVITIES OF SOME METAL COMPLEXES WITH SCHIFF BASE DERIVED FROM SUBSTITUTED SALICYLALDEHYDE AND AMINO ACIDS

SYNTHESIS, CHARACTERIZATION AND ANTI-MICROBIAL ACTIVITIES OF SOME METAL COMPLEXES WITH SCHIFF BASE DERIVED FROM SUBSTITUTED SALICYLALDEHYDE AND AMINO ACIDS

ABSTRACT: The development of anti-microbial agents, microorganisms that have acquired resistance to drugs through a variety of mechanisms, have emerged and continue to plague human beings. Since, the use of anti-microbial drugs has selected drug-resistant bacteria, the proper use of currently available anti-microbial drugs and efforts to minimize the transmission and spread of resistant bacteria through appropriate infection control would be the first step in resolving the issue of resistant organisms. Synthesize and characterize some metal complexes with Schiff base derived from substituted salicylaldehyde and amino acids by an efficient methodology. The synthesized compounds were evaluated for their in-vitro anti-microbial activity. Synthesized compounds were examined for Anti-bacterial activity using the disc diffusion method and antifungal activity using cup plate method. The bacterial strains of Escherichia coli [Gram negative] MTCC - 443, Staphyloco ccusaureus [Gram positive] MTCC - 96, Bacillus subtilis, and Salmonella typhi using norfloxacin as standard. The fungal strain of Candida albicans with fluconazole was used as standard. In-vitro anti-microbial data represent the cobalt-containing metal complex were most active anti-bacterial compound, and the glutamine with zinc, serine with ferric complex were most active anti-fungal  agents, its safe as its MIC value is much lower than the cytotoxic value. All the complexes synthesized may be stable at room temperature and non-hygroscopic in nature. The transition metal complexes of Schiff base ligands might have increased biological activities due to their lipophilic character.

INTRODUCTION: The word anti-microbial was derived from the Greek words anti (against), mikros (little) and bios (life) and refers to all agents

that act against microbial organisms. This is not synonymous with antibiotics, a similar term derived from the Greek word anti (against) and biotikos (concerning life). Anti-microbial use is known to have been common practice for at least 2000 years 1.

Ancient Egyptians and ancient Greeks used specific molds and plant extracts to treat an infection. In the 19th century, microbiologists such as Louis Pasteur and Jules Francois Joubert observed antagonism between some bacteria and discussed the merits of controlling these interactions in medicine 2. Anti-microbial agents, including various antibiotics and synthetic antibiotics that have bactericidal or bacteriostatic effects, are drugs that kill or inhibit the effects of bacteria 3. An anti-microbial is an agent that kills microorganisms or stops their growth. Microbes are responsible for several poisonous syndromes and prevalent epidemics in human civilizations. Microbial diseases such as plague, diphtheria, typhoid, cholera, pneumonia, and tuberculosis have taken a high toll on humanity in recent pasts. In present times, many of the accessible anti-microbial drugs are poisonous and create a recurrence of diseases because they are bacteriostatic and not bactericides 4.

The science dealing with studying the prevention and treatment of diseases caused by microorganisms is known as medical microbiology. In recent years, there has been a growing interest in researching and developing new anti-microbial agents from various sources to combat microbial resistance. Therefore, greater attention has been paid to anti-microbial activity screening and evaluating methods 5. Various methods have been used from time to time by several workers to evaluate the anti-microbial activity. The evaluation can be done by the following methods 6.

In view of the high degree of bioactivity shown by the metal complex and the continuation of the search for novel anti-microbial agents, it was predicted to construct a system in which all these systems are in a single molecular frame to explore the additive effects towards anti-microbial activity. Hence, some metal complexes with Schiff base from substituted salicylaldehyde and amino acids have now been synthesized.

Step 1: To a stirred solution of salicylaldehyde  (0.308 g, 2 m mole) in hot methanol (10 ml) was added (1 g, 2 m mole) of corresponding amino acid in hot methanol (15 ml) followed by 2 ml of glacial acetic acid. The reaction mixture was heated under reflux for 6 h with continuous stirring. The color of the solution was changed from orange to brown, followed by the formation of a brown precipitate. The product was filtered, washed with hot mixture methanol: water (v: v) (80:20) % followed by cold methanol and ether, and vacuum dried. The completion of the reaction was monitored by TLC using ethyl acetate: hexane (5:5) as the mobile phase. The melting point was reported and the recrystallization was carried out by ethanol 7.

Synthesis of Metal Complexes: To a stirred solution of each ligand (0.2 g, 0.33 m mol) in a mixture of ethanol-water (80:20)% (3 ml) heated to the boiling point was added an alcoholic solution of the metal salts (0.16 m mole) with continuous stirring. Immediate precipitation of metal complexes was observed. Reflux was continued for 1 h for complete precipitation. The products were filtered off, washed with hot EtOH: H2O followed by ether and vacuum dried 8. 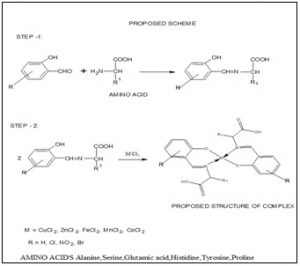 Based on the above scheme in the first step, using all the amino acids to get six amino acid derivatives then followed by the second step is coupled with given metals to obtain 30 different metal complex compounds.

Elemental Analysis9: Elemental analysis (% C, H, N) was carried out by a Perkin- Elmer 2400 CHN analyzer. IR spectra of all compounds were recorded on a Perkin-Elmer FT-IR spectro-photometer in KBr; frequencies are reported in cm-1. 1H NMR spectra were run on Varian Gemini 300 MHz, and 13C NMR spectra on Varian Mercury- Compound1 Pyrazole (0.01 mol) and 4- Nitrobenaldehyde (0.01 mol) were dissolved in acetic acid (20 mL), and the reaction mixture was refluxed for  8 hr.  After cooling, the crystals formed were filtered and purified by recrystallization from absolute alcohol.

Agar Well Diffusion Method: Agar well diffusion method is widely used to evaluate the anti-microbial activity of various compounds. The agar plate surface is inoculated by spreading a volume of the microbial inoculums over the entire agar surface. Then, a hole with a diameter of 6 to 8 mm is punched aseptically with a sterile cork bore tip, and a volume (20-100 ml) of the anti-microbial agent or extract solution at desired concentration is introduced into the well.

Then, agar plates are incubated under suitable conditions depending upon the test microorganism. The anti-microbial agent diffuses in the agar medium and inhibits the growth of the microbial strain tested. Following common standard strains were used for screening of anti-bacterial activity: Escherichia coli [Gram negative] MTCC - 443, Staphylococcus aureus [Gram positive] MTCC - 96, Bacillus subtilis, and Salmonella typhi.

The entire work was done using a horizontal laminar flow cabinet so as to provide an aseptic condition. Isolated colonies must be selected from an 18 to 24 h culture on an agar plate. A non-selective medium, such as blood agar should be used. Weigh accurately 1mg of the synthesized compound and completely dissolved in 1 ml DMSO. This solution is used as a test solution for anti-microbial studies 10.

The newly prepared metal complex compounds were also screened for their antifungal activity as primary screening against Candida albicans. The well was completely filled with 70 µL of test solutions (1 µg/µl). The plates were incubated at 39 ºC for 48 h for antifungal activities. The inhibition zone that appeared around the holes in each plate was measured. Activities were determined by measuring the diameter of the zone of inhibition. The antifungal activity of each compound was compared with fluconazole (70 µg/ml) as a standard drug. For fungal growth, in the present protocol, Sabourauds dextrose broth has been used at 28 °C under aerobic conditions for 48 hr. DMSO and sterilized distilled water were used. The ligands were tested by disc diffusion method and MIC for various concentrations 12.

RESULTS AND DISCUSSION: In the attempt to synthesize cost-effective drugs, prepare a schiff base from substituted salicyl aldehyde with different amino acids, followed by preparation of metal complex with divalent metals in 2:1 stoichiometry (Schiff base:  ligand) to obtain six different compounds. Elemental analyses and spectroscopic methods confirmed the structure of the synthesized compounds. The IR spectrum of PFA, as a descriptive example shown in Fig. 1. revealed an absorption peak at 3157.21 cm-1 due to the presence of the carboxylic-OH group. The ligand showed (C=O) banding in the region at 1,711 cm-1. A strong band at 2,994 and 3,111 cm-1 could be assigned to aliphatic and aromatic C-H, respectively. A comparison between the infrared spectra of the ligand and the respective complexes reveals the disappearance of absorption bands associated with the stretching NH group, indicating the loss of proton on complexation and the formation of metal nitrogen bond. In the low-frequency region, the complexes had new bands at 598 - 518 and 699 - 655 cm-1, attributable to (M-N) and (M-O) stretching. The 1H-NMR spectrum of PFA showed in Fig. 2 it displays new signals at δ 3.73, 5.0, 6.9, and 7.3 ppm assigned to hydroxy and aromatic protons. Moreover, the mass spectra of compounds PFA gave molecular ion peaks at m/z 577.90. This clearly indicates the formation of the metal complex of PFA by the complexation of various amino acids with metal ions. The anti-bacterial screening results Table I. revealed that some of the tested compounds showed excellent inhibition against various tested microbial strains compared to the standard drug. From anti-bacterial activity data in Table I, it was observed that compounds containing cobalt metal complex were the most potent anti-bacterial agents. The highest inhibition of such derivatives may be accredited to the presence of cobalt metal in the compounds. The six metal complexes of cobalt with various amino acid compounds PFA (Cobalt + Histidine) displayed excellent activity against the bacterial strains compared to standard norfloxacin. This enhancement of activity suggests that chelation moderately increased the lipophilic character of the compounds and subsequently their permeation through the lipid layer of the microbe’s cell membrane. 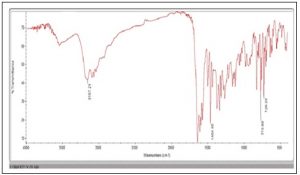 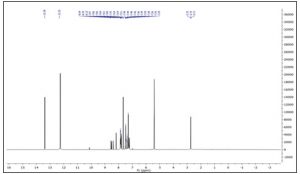 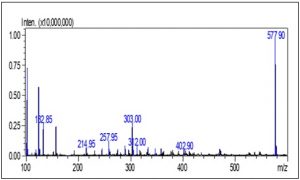 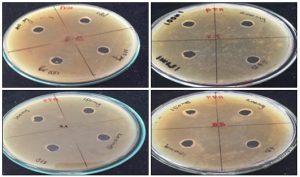 The in-vitro antifungal activity of synthesize eleven different metal chelates was determined against Candida albicans by the conventional disc diffusion method. Similar trends were observed for the antifungal activity and the glutamine with zinc and serine with ion coordinate compounds were the most potent antifungal agents. Furthermore, the results indicated that the chelate compounds (3b and 4a) were found to be the most promising agents against the fungal strain in comparison with the control drug Fluconazole. The enhanced activity of the metal complex may to increase the lipophilic character played a main role in increasing antifungal activity.

FIG. 8 & 9: ZONE OF INHIBITION COMPOUND 3B AND 4A AGAINST THE CANDIDA ALBICANS SER+ FE GLU+ZN

CONCLUSION: In summary, some new metal complexes synthesized and characterized Schiff base ligand derived from the condensation of substituted salicylaldehyde with different amino acids followed by complexation with metals for their biological activity. The low molar conductance of all the complexes should be a non- ionic character. All the complexes synthesized may be stable at room temperature and non-hygroscopic in nature. The transition metal complexes of Schiff base ligands might have increased biological activities. The synthesized compound containing complex metals has better anti-bacterial activity and antifungal activity.

ACKNOWLEDGEMENT: This research did not receive any specific grant from funding agencies in public, commercial, or not-for-profit sectors. The authors acknowledge the support of The Erode College of Pharmacy in this manuscript.