It has also been noticed that certain benzimidazole derivatives like ciprofloxacin and norfloxacin are most essential and popular antibiotics. In view of substantial pharmacological importance and multidimensional applications of benzimidazole-triazole mixed heterocyclic compounds we were motivated to study their chemistry and here we report synthesis, characterisation and antibacterial activity of new substituted triazole ring containing 1H-benzo[d]imidazole-2ylsulfanylmethyl derivatives, 3-(1H-Benzo[d]imidazole-2-ylsulfanyl) methyl-4-[phenoxy(phenyl)acetamido)-5-mercapto-1,3,4-triazole (BSPT) and its nine related aryloxy derivatives (B-I to B-IX). 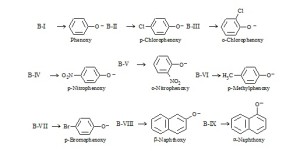 METHODS AND MATERIALS: All the reagents and chemicals were obtained from E Merck, Loba chem, Chem pure, Sigma Aldrich and Fluka (Germany). Solvents used for synthesis were analytical grade reagent. The purity of the products was checked by TLC. The purity of known and reported chemicals was ascertained from MP and estimation of nitrogen.

The FTIR spectra of compounds were recorded in KBr disc on Shimadzu, IR Spectrophotometer-2500.

The 1HNMR spectra of compounds were recorded on a Brucker AV-400 spectrophotometer in CDCl3 or DMSO or DMF-d6.

The CHNS analysis reports were obtained from CDRT Lucknow or BIT Mesra, Ranchi.

(d)   Potassium dithiocarbazinate of (1H-benzo[d]imidazole-2-ylthio)methylcarbohydrazide. adopting scheme A, B and C

(a)     Phenoxy(phenylacetic acid) hydrazide and its derivatives were synthesised using Scheme A.

(b)     The compound ‘b’ and ‘c’ were obtained from market and they were Fluka Product. Both b and c were used without further purification.

Preparation of aryloxy phenyl acetic acid hydrazide: Sodium salt of phenol and substituted phenols were refluxed with ethyl (phenyl chloroacetate) [C6H5-CHCl-COOC2H5] in dioxane on steam bath for 3 hours and

The crude aryloxy compound aryloxy ethyl (phenylacetate) obtained above was refluxed with 98% hydrazine hydrate on a steam bath for 3-4 hours. The product formed was triturated with ether to remove unreacted phenol and ester. The white mass left was recrystallised with aqueous ethanol. The related substituted aryloxyphenylacetic acid hydrazides (A-I to A-IX) were also prepared following the above procedure.

The reaction of aryloxy ester (RO-CH(C6H5)-COOC2H5) with hydrazine takes place as shown below:-

Preparation of (1H-benzo[d]imidazol-2-ylsulfanyl)acetic acid hydrazide, from 1H-benzo[d]imidazole-2-thiol: Potassium salt of 1H-Benzo[d]imidazole-2-thiol (BtH) was prepared by heating aqueous ethanol solution of thiol (BtH) with calculated amount of K2CO3 and the potassium 1H-benzo-[d]-imidazol-2-thiolate (KBt) was obtained by evaporating the solution to dryness. The dried product was suspended in dry acetone and refluxed with ethylbromoacetate (Br-CH2COOC2H5) with stirring. The resulting solution was filtered and solvent evaporated to get solid product. The crude ester obtained was refluxed with 98% hydrazine hydrate in 30 ml THF to yeild 2-[1H-benzo[d]imidazol-2-ylsulfanyl)acetohydra zide (M.P- 236-237oC Reported-236oC)

The purity of products was ascertained from TLC, melting point and C, H, N analysis of recrystallized product (B).

The triazole containing benzimidazole derivatives (B-I to B-IX) were obtained by refluxing potassium dithiocarboazinate of (1H-benzo[d]imidazol-2-ylthio)methylcarbonohydrazide and aryloxy-(phenylacetohydrazide in pyridine as given in Scheme C.

2-(1H-Benzo[d]imidazole-2-ylsulfanyl)acetohydra zide was suspended in ethanol-dioxane mixture and treated with calculated amount of CS2 and KOH and stirred for two hour to get potasssium salt of dithiocarbazinate of B. Potassium salt of dithiocarbazinate of ‘B’ was refluxed with aryloxy(phenylacetic acid)hydrazide in pyridine when pyridinium salt of 3-(1H-benzo[d]imidazole-2-ylsulfanyl)methyl-4-[aryloxyphenylacetamido]-5-mercapto-1,3,4-triazole [BSPT] was obtained. The free mercapto triazole derivatives (B-I to B-IX) were obtained by neutralising the product with dilute hydrochloric acid. 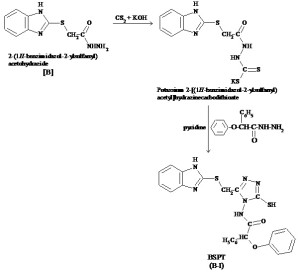 General method for preparation of A-I to A-IX: 10 millimoles of phenol or substituted phenol or naphthols was taken in 50 ml dioxan or THF and refluxed with calculated amount of KOH to get potassium salt of phenol. The potassium phenolate was treated with 10 millimole of ethylphenyl chloroacetrate and refluxed gently for three hours and solid separated (KCl) was removed by filtration. The filtrate containing ethyl (aryloxy phenyl acetate) was treated with hydrazine hydrate (98%) and refluxed gently for three to four hours on steam bath and solvent evaporated to get syrupy mass.

The product on cooling gave solid product which was recrystallised with hot aqueous ethanol or tetrahydrofuran (yield 80-85%).

The method of preparation of B: About 0.1 mole of potassium salt of (1H-benzo[d]midazol-2-thiol) was taken in dry acetone and refluxed on steam bath with 0.1 mole of ethylbromoacetate with stirring for 3 hours. The sulfanylacetate was obtained on evaporation of acetone. The product was collected and recrystallised with ethanol tetrahydrofuran mixture. The acetate was refluxed with 98% hydrazide-hydrate to get 2-(1H-benzo[d]imidazol-2-yl) sulphanylacetohydrazide.

General procedure for preparation of B-1 to B-IX: About 10 millimole of B was  taken in 30 ml ethanol and calculated amount of 10-12 millimole CS2 and 10 millimole  KOH  were mixed and refluxed with stirring for 2-hour when potassium salt of dithocarbazinate separated. The product was dissolved in 20 ml pyridine and refluxed with 10 millimoles of aryloxyphenyl acetic acid hydrazide [Aro-CH(Ph)CO NH-NH2] for 3 – 4 hours. The refluxate on cooling gave cream yellow crystalline precipitate of pyridinium salts of B-I to B-IX. The free mercaptotriazole was obtained by suspending the pyridinum salt in 30-40 ml water and neutralising it with dilute HCl. The free triazole was recrystallized with ethanol-THF mixture. The result of elemental analyses and mpt of B-1 to B-IX are given in Table B.

The 1HNMR spectra of hydrazides A-I to A-IX are consistent with proposed structure and these are supported by FTIR and elemental analysis.

The I.R. spectral band positions of A-I to A-IX and triazolo product B-I to B-IX are recorded in Table 3 & 4.

The I.R. spectra of phenoxy and related aryloxy (phenylacetic acid)hydrazide show characteristic NH2, NH, phenyl C-H and amido CO stretches in 3m-16m region and NH2, NH, C-H and CO stretches as well as NH2 bending and phenoxy Ph-O-C stretches of compounds A-I to A-IX are recorded in Table 3. The NH2 and NH stretches were located between 3348-3105 cm-1 and phenyl ring (C—H) stretches between 3085-3050 cm-1. The strong band located at 1685-1698 cm-1 is assigned to u(CO) of amide group. The medium band located near 1636-1628 cm-1 is attributed to d(NH2) of hydrazide group (CO-NH-NH2). A medium band located at 1063 to 1050 cm-1 (Table 3) is attributed to aryloxy (C—O—C) stretching vibration. These i.r bands of compound A-I to A-IX are consistent with proposed structure of aryloxy(phenylacetic acid)hydrazide.

The u(S-H) attached to triazole ring could not be observed indicated the predominance of thione tautomer in the molecule. The d(NH) of B-I to B-IX were observed between 1526-1508 cm-1 and u(C=S) band could be assigned to a strong i.r band observed between 1342-1305 cm-1. The phenoxy (-C-O-C-) stretch can be assigned to a medium i.r band near 1020 ± 10 cm-1. A large number of IR band located in finger print region are assigned to phenyl and triazole ring skeletal vibrations.

Antibacterial and antifungal activity: The antifungal activities of BSPT (Compound B-I to B-IX) were evaluated by radical growth method26 using Czepek agar medium prepared by dissolving 20 g starch. 20 g agar 20 g glucose in one litre distilled water.  The resulting solution was added requisite amount of test compound to get 100 and 200 ppm solution. The medium was then poured into petri plate and spore of fungi were placed on medium with the help of inoculum needle. These petri plate were wrapped in polythene bags by mixing 2 drops of ethanol and placed in an incubator at 30 ± 0.5oC. The linear growth of fungi was calculated by measuring the fungal colony diameter after five days. The percentage inhibition was calculated using the relation;

Where C & T are the diameter of the fungus colony and control test plate respectively. The fungi used in present microbial screening are Candida albicans, F oxysporum, Aspergillus flavus, R. phaseoli and A. niger. The control solution was mycostalin. The result of activity is shown in Table 5. Almost all benzimidazolylsulfanylmethyl triazole derivatives have causes inhibition of fungal growth but the activity of nitrophenoxy derivatives (B-IV & B-V) were quite encouraging comparable to mycostalin. The activities of B-I to B-IX were larger with Candida albicans and A. niger.

The antibacterial activity against E. coli, S. aureues and Bacillus subtilis were studied for compounds B-I to B-IX and zone of inhibition was observed in all the derivatives. The activity was studied by zone inhibition technique 27.

The nutrient agar medium was prepared by dissolving 5 g peptone 5 g beef extract, 5 g NaCl and 20 g agar agar in one litre distilled water. The medium solution was pipetted into petri plate and dried; the dried plate was seeded with bacteria and test compound dissolved in DMF (250 ppm 500 ppm strength). The disc of whatman filterpaper soaked with these solutions to 5 mm diameter discs were dried and placed on medium previously soaked with organism in petriplate at suitable distance and incubated at 30 ± 1oC for 24 hours. The zone of inhibition was measured accurately in mm. The results of inhibition are recorded in Table 5. It was encouraging to note that compounds were highly active on Escherichia coli. The standard used was chlorophenicol.

TABLE 3: THE INFRARED AND 1HNMR SPECTRAL DATA OF COMPOUND A-I AND A-IX

Prominent I.R bands in cm-1 of compounds A-I to A-IX

TABLE 5: ANTIBACTERIAL AND ANTIFUNGAL ACTIVITY OF COMPOUNDS B-I TO B-IX

CONCLUSION: The mixed triazole, benzimidazole derivative show positive antibacterial properties as well as antifungal effect. The antifungal properties of retrosubstituted products are larger than other.

ACKNOWLEDGEMENT: Thanks are due to CDRI, Lucknow and authority of IIT Patna for spectral measurements. Thanks are also due to Biotechnology Department P.U for microbiological test and BIT, Mesra for C, H, N, S analysis.