INTRODUCTION: Heterocyclic ring system of Oxadiazole and their derivatives  aroused great interest in the past and recent years due to their wide variety of biological properties such as Antiviral1, antitumor 1-2, Anti-inflammatory 3, CNS 4-9, Local anesthetic 5-10, Antimicrobial activity 12 and their derivatives of Oxadiazoles are also biologically important. In view of these findings, we have attempted to incorporate both the biolabile components together to give a confine structure like title compound for evaluating its antimicrobial activity. Our efforts for the synthesis of compounds possessing antifungal19 and antibacterial activities19 led us to the discovery of several derivatives of Oxadiazoles. Among these amino Oxadiazole derivatives have displayed good antibacterial activity, while nitro and amino oxadiazole derivatives showed poor antifungal activities.

Chemistry: Nicotinic acid (I) on treatment with ethanol in presence of Conc. Sulphuric acid affords pyridine- 3- carboxylate (II) Compound (II) when reacted with hydrazine hydrate in ethanol yielded pyridine- 3- carboxylic acid hydrazine (III) and on treatment with aromatic acids in the presence of phosphorus oxychloride affords 3- (5- substituted phenyl-1, 3, 4- Oxadiazol- 2- yl) pyridines (IVa-e). The overall reaction of Scheme given below;

Synthesis of ethyl pyridine- 3- carboxylate (II): A mixture of pure nicotinic acid (I) (0.5mol), 100ml of ethanol and 50ml of Conc. Sulphuric acid were refluxed for 4hrs on a steam bath. After cooling the solution, it was poured in to crushed ice and neutralized by strong ammonia solution, ester separates as oil. Extract the solution with anhydrous magnesium sulphate. Ether was removed by evaporation on a water bath and the residue of ethyl pyridine-3-carboxylate was obtained.

Synthesis of Pyridine- 3- Carboxylic acid Hydrazine (III): A mixture of ethyl pyridine-3-carboxylate (II) and hydrazine hydrate in equimolar portion and 15ml of ethanol was refluxed for 4-6hrs. On cooling crude product was separated out. It was filtered, collected and recrystallized from ethanol.

General Procedure for Synthesis of 3 (5- aryl- 1, 3, 4- oxadiazole- 2- yl) - pyridine derivatives (IVa-e): A mixture of nicotinic acid hydrazine (III) (0.01mol) and various aromatic acids (0.01mol) in phosphorus oxychloride (5-10ml) was refluxed for 5-6hrs. The contents were cooled and poured into crushed ice. It was neutralized with sodium bicarbonate solution and resulting solid was filtered, dried and recrystallized from suitable solvent to obtained corresponding derivatives. 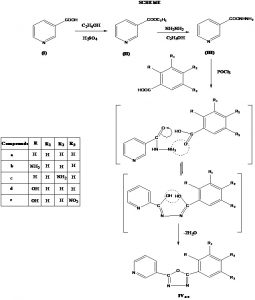 Mass spectra were recorded on a VG analytical 7070E instrument equipped with VG 11-250 data acquisition system. Elemental analysis (C,H and N) were carried out on a Carlo Erba Model 1106 and Perkin Elmer models 240 CHN analyzer. The results are within +0.4% of the theoretical values. Unless otherwise stated, all the starting materials and reagents were of high grade, purchased from Aldrich, Fluka and Merck. All the solvents were distilled prior to use. The structures of the synthesized compounds have been established on the basis of their analytical and spectral data. All the compounds have been screened for their antimicrobial activities.

In vitro Antibacterial and Antifungal Activity: The in vitro activities of the compounds were tested in Sabourauds dextrose broth (SDB; Hi- media, Mumbai) for fungi and Nutrient broth (NB; Hi-media, Mumbai) for bacteria by the two fold serial dilution method 19-20. The test compounds were dissolved in dimethylsulfoxide (DMSO) to obtain 1mg ml-1 stock solution. Seeded broth (broth containing microbial spores) was prepared in NB form 24 hrs old bacteria cultures on nutrient agar (Hi-media, Mumbai) at 37+1oC while fungal spores from 24hr to 7 days old Sabourauds agar slant cultures were suspended in SDB. The colony forming units (cfu) of the seeded broth were determined by plating technique and adjusted in the range of 104-105 cfu ml-1. The final inoculam size was 105 cfu ml-1 for antibacterial assay 19 and 1.1-1.5 X 102 cfu ml-1 for antifungal assay 19. Testing was performed at pH 7.4+0.2. Exactly 0.2 ml of the solution of test compound was added to 1.8 ml of seeded broth to form the first dilution.

One milliliter of this was diluted with a further 1 ml of the seeded broth to give the second dilution and so on till six such dilutions were obtained. A set of assay tubes containing only seeded broth was kept as control and likewise solvents control were also run simultaneously. The tubes were incubated in BOD incubators at 37+1oC for bacteria and 28+1oC for fungi. The minimum inhibitory recorded by visual observations after 24hr (for bacteria) and 72-96h (for fungi) of incubation. Ampicillin and Griesofulvin were used as standards.

Antibacterial Activity 13, 15, 19, 22: These synthesis of a series of these derivatives was carried out and the obtained compounds IVa-e were tested for their in vitro antibacterial activity against some Gram positive [Staphylococcus aures NCIM-2492 and Bacillus subtilis NCIM-2439] and Gram negative [Escherichia coli NCIM-2345 and Klebsiella pneumoniae species bacteria. Ampicillin used as standard drug whose minimum inhibitory concentration values are summarized in Table 1. The antibacterial screening put in evidance that all the synthesized novel 3- (5- substituted phenyl- 1, 3, 4- oxdiazol- 2- yl) pyridines IVb and IVe exhibited a wide spectrum of antibacterial profile in vitro against the test organisms. Compound IVa without any substitution, compound IVb amino group at R-position, Compound IVc, amino group at R2 position, among these Compounds showed exhibited activity against Escherichia coli and Klebsiella species. Compound IVd OH group substituted at R position and Compound IVe, OH and NO2 group substituted at R and R3 position. Among these Compounds showed good activity against Escherichia coli. Overall Compounds IVb and IVe exhibited good antibacterial activity.

Antifungal Activity 13, 15, 19, 22: The in vitro antifungal activity of compounds IVa-e were examined against the fungal strains Viz., Candida albicans (NCIM-C27), Griesofulvin was used as standard drug whose minimum inhibitory Concentration values are reproduced in Table 2.