Schiff base ligand (E)-4-[(hydroxyl phenylimino)methyl]benzene-1, 2-diol (H3L) was prepared from the condensation reaction of Protochatechu aldehyde (3, 4-dihydroxybenzaldhyde) with 2-amino phenol. From the direct reaction of the ligand (H3L) with Co(II), Ni(II) and Cu(II) chlorides and Fe(III) and Zn(II) nitrates in 2M:1L molar ratio, the five new neutral complexes were prepared. The characterization of the newly formed compounds was done by 1HNMR, UV-Vis and IR spectroscopy and elemental analysis. The in-vitro antibacterial activity and antifungal activity of the metal complexes were studied and compared with that of free ligand. The Cupper complex shows the higher biological activity.

INTRODUCTION:Some Schiff bases were tested for fungicidal activity, which is related to their chemical structure 1, there metal complexes are important in biochemical process. For example, the transamination reactions are catalyzed by metals ions through the formation of intermediate Schiff bases containing vitamin B6 2.

In the area of bioinorganic chemistry, interest in Schiff base complexes has centered on the role of such complexes in providing synthetic models for the metal containing sites in metallo-proteins and enzymes 3. Schiff base ligands are potential anticancer drugs 4 and the anticancer activity of this metal complex is enhanced in comparison to the free ligand 5.

In the present work, new Schiff base derived from condensation of PCA and 2-amino phenol and its complexes are prepared and investigated using the elemental analysis and UV-Vis, IR, 1HNMR spectra as well as TGA and the biological activities also are studied.

Instruments: Percentages of C, H and N were determined in the Mirco analytical Laboratory, Cairo University, Giza. IR spectra were recorded using KBr pellets on a Perkin-Elmer 1430 Spectrometer for the region (200-4000 cm-1) at the Faculty of Science, Tanta University.

RESULTS AND DISCUSSION: The present Schiff base H3L, (Fig. 1) was prepared by refluxing in ethanol an equimolar mixture of PCA and 2-aminophenol. The structure of formed Schiff base was established by IR, 1HNMR, mass and U.V-vis spectra as well as elemental analysis. All complexes were prepared by direct reaction between Schiff base ligand H3L and corresponding salts. The obtained complexes are stable in air and have melting points above 150oC. They are insoluble in organic solvents such as diethyl ether and acetone, but soluble in DMF and DMSO. The elemental analysis data of the Schiff base and complexes (Section 2) are in well agreement with the expected structure.

The  molar  conductance values  of  the  synthesized  complexes was determined using 10-3 M concentration   in DMF as solvent, are  in  the  range of 0.83 -1.65 Ω-1 cm2 mol -1 These values  suggest non-electrolyte nature for these complexes 11.

The 1HNMR spectrum of the Schiff base ligand (Fig. 2a, b) shows signals lying at rang 8.5-9.5ppm are due to the resonance hydroxyl groups, the signals of OH groups lying at higher field side can be attribute to the contribution of the OH group intramolecular and intermolecular hydrogen bonds, addition of D2O to the pervious solution results in diminishing the signal due to proton exchange. The resonance of imine proton dowenfield shifted to (9.6 ppm) due to the strong shielding effect of the hydroxyl groups. Also the multiple signals lying in range 6.7-8.4 ppm are due to resonance of aromatic protons. 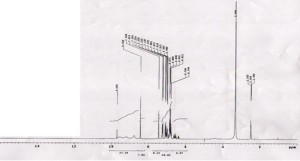 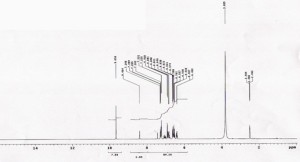 The electronic spectrum of the ligand in DMF displays bands below 330nm are attribute to intraligand Π-Π* and n-Π* transitions of the benzene ring and azomethine group. The mass spectrum of the free Schiff base ligand (Fig. 3) shows its molecular ion peak at m/e=229 which coincides with formula weight. 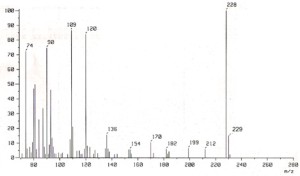 FIGURE 3: THE MASS SPECTRUM FOR (H3L)

Characterization of the complexes:

Deprotonation of of all phenolic functions is confirmed by the lack of  phenolic O-H stretching bands at 3318 indicating the Participation with the metal ion as –O- ,on the other hand very broad bands observed in the spectra of the complexes in the range (3389-3448) cm-1considerable support the presence of water molecules in the complexes14.The band at 1270cm-1 in the free ligand ascribed to the phenolic C-O stretching vibration, this band is shifted to lower frequencies (1165-1196cm-1) due to O- metal coordination 15. The weak bands appeared in the far IR spectra between (540-590cm-1)attributed to νM-O.

The magnetic moment (3.2 BM) indicates the tetrahedral geometry of the ligand around Ni +2 ion19. The spectrum of Cu(II) complex (5) in DMF gave abroad band at 506nm ,hence, the cupper complex appear to be in tetrahedral geometry .The µeff value (1.8 B.M) is corresponding to tetrahedral geometry arrangement of the ligands around the Cu+2 ion 20. The electronic spectroscopy doesn’t permit the establish of a clear stereochemistry for the Zn(II) but taking into consideration the tendency of  the Zn(II)  ion  for  the  tetrahedral geometry  in  the  tetra coordination complexes, we propose  this  type  of  stereochemistry. The electronic absorption spectrum of Zn(II) complex (6) in DMF showed charge transfer band at 430nm,thediamagnetic behavior due to d10 configuration of Zn+2 ion 21. 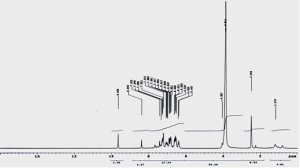 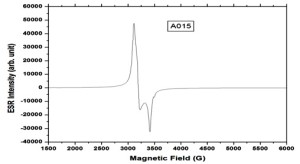 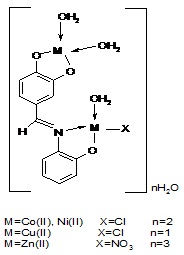 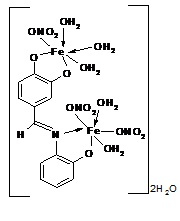 Antimicrobial Activity:Screening for the antimicrobial activity of the ligand H3L and its complexes were tested; the testing was carried out by using the classical agar diffusion method (Cooper, 1972). Antimicrobial disk diffusion was performed as described by the National Committee for Clinical Laboratory Standard 23, 24. The antimicrobial activity data of the compounds are collected in table 3 and show that all tested compounds have an appropriate    activity against Gram-positive bacteria represented by Bacillus subtilis and Staphylococcus aureus. The most active of them was compound number (5) (recorded 28.5 & 29 mm inhibition zone diameter respectively) followed by compound number (3) (recorded 22 & 25 mm inhibition zone diameter respectively). Also, the compound (5) showed a good activity against Gram-negative bacteria represented by Escherichia coli ande Pseusdomonas aeruginosa (recorded 22 & 30 mm inhibition zone diameter respectively).

In turn, compounds (5) and (4) have a good and highest activity against unicellular fungi represented by Candida albicans (compound (5) recorded 29.5 mm zone diameter) and filamentous fungi represented by Aspergillus niger (compounds (5, 6 and 4) showed a good activity and recorded (30, 27.4 and 25.5 mm zone diameter respectively). In sum, the most active compound among the six tested compounds against the six tested microorganisms was compound number (5) due to its wide spectrum of activity and good activity against bacteria and fungi as we see from (Fig. 11).

TABLE 3: THE ANTIMICROBIAL ACTIVITY OF THE COMPOUNDS (1-6) 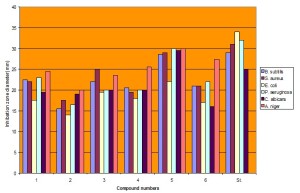 FIGURE 11: BIOLOGICAL EVALUATION OF SCHIFF BASE (H3L) AND ITS COMPLEXES